Former Vice President Joe Biden is putting more distance between himself and the rest of the Democratic presidential field. (Sean Rayford/Getty Images)
By Eli Yokley

Morning Consult’s latest 2020 tracking data measured an increase of 4 percentage points from the previous week in the share of voters who picked him as their first choice for the party’s presidential nomination. It gives the former vice president a 10-point bump in the two polls conducted since he launched his bid for the presidency last month, an upward swing unmatched by any other candidate in the race.

Four in 10 Democratic primary voters ranked Biden as their first choice in the primary, up from 36 percent in the prior week, cementing his early status as the front-runner amid attacks on his progressive bona fides from Sen. Bernie Sanders (I-Vt.). 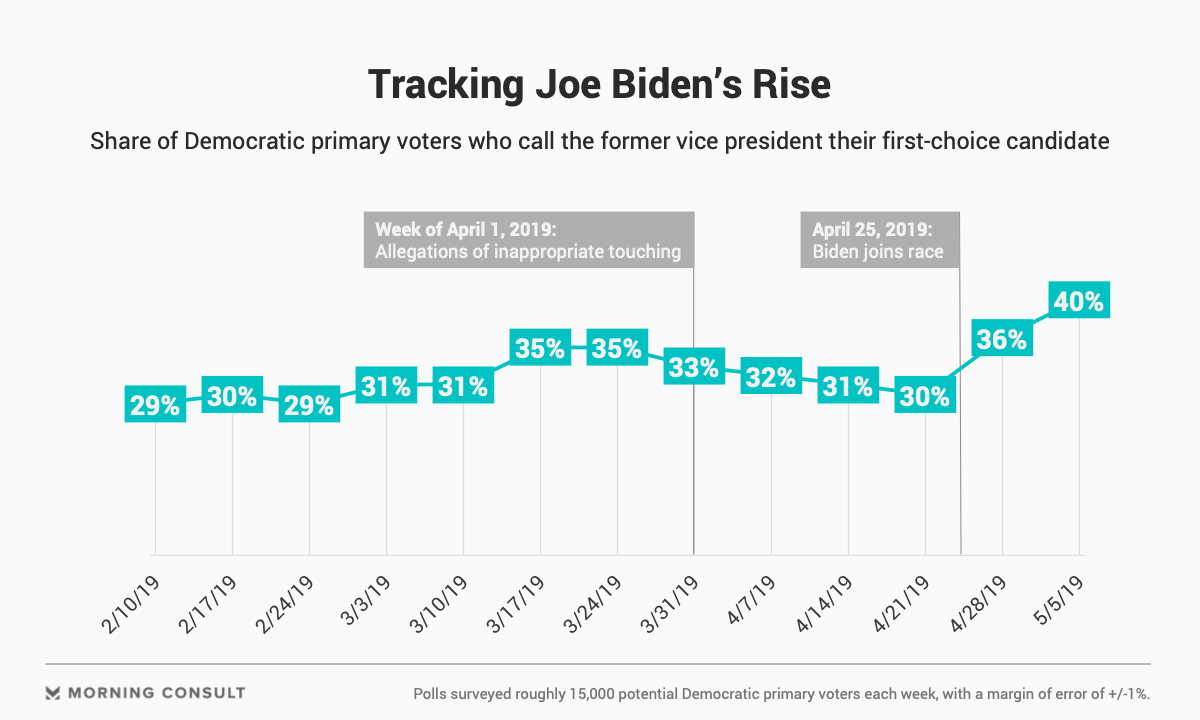 Other than a 2-point bump last week for Sen. Elizabeth Warren (D-Mass.), Biden’s the only candidate to increase his share of the vote in the past two weeks, with others stagnating or dropping. Sanders – who’s polling second with 19 percent – is down 5 points since Biden’s April 25 announcement, while South Bend, Ind., Mayor Pete Buttigieg is down 3 points over the same time period.

The poll, which surveyed 15,770 Democratic primary voters April 29-May 5, has a 1-point margin of error.

Biden held his first official campaign event on April 29 in Pittsburgh after receiving the endorsement of the International Association of Firefighters, a group that stayed on the sidelines during the 2016 presidential campaign. In a show of strength, his campaign said it raised $6.3 million in the first 24 hours of his campaign, more than any other 2020 Democratic contender.

Biden’s strongest support is coming from older Americans, with 53 percent of respondents older than 65 calling him their top pick. The same is true among the oldest black Americans (61 percent), Asian Amerians (57 percent), and the country’s oldest women (54 percent).

His support is weakest among the youngest voters surveyed: Twenty-six percent of 18- to 29-year-olds support Biden, 8 points less than the share who back Sanders.

Related: Joe Biden Is the Front-Runner — Over Democrats, and Donald Trump