With her student debt forgiveness proposal, Sen. Elizabeth Warren (D-Mass.) has hit on another popular policy ahead of the 2020 presidential race.

Fifty-six percent of registered voters support Warren’s student loan debt forgiveness plan, according to a recent Morning Consult/Politico survey. The poll surveyed 1,990 registered voters from May 3-6 and carries a 2-point margin of error.

Warren’s plan would cancel up to $50,000 in student loan debt for every person with household income under $100,000. The proposal would also make public colleges tuition-free and use Warren’s wealth tax — a 2 percent annual tax on households with $50 million in wealth and a 3 percent tax on income over $1 billion — to pay for its $1.25 trillion price tag over 10 years. 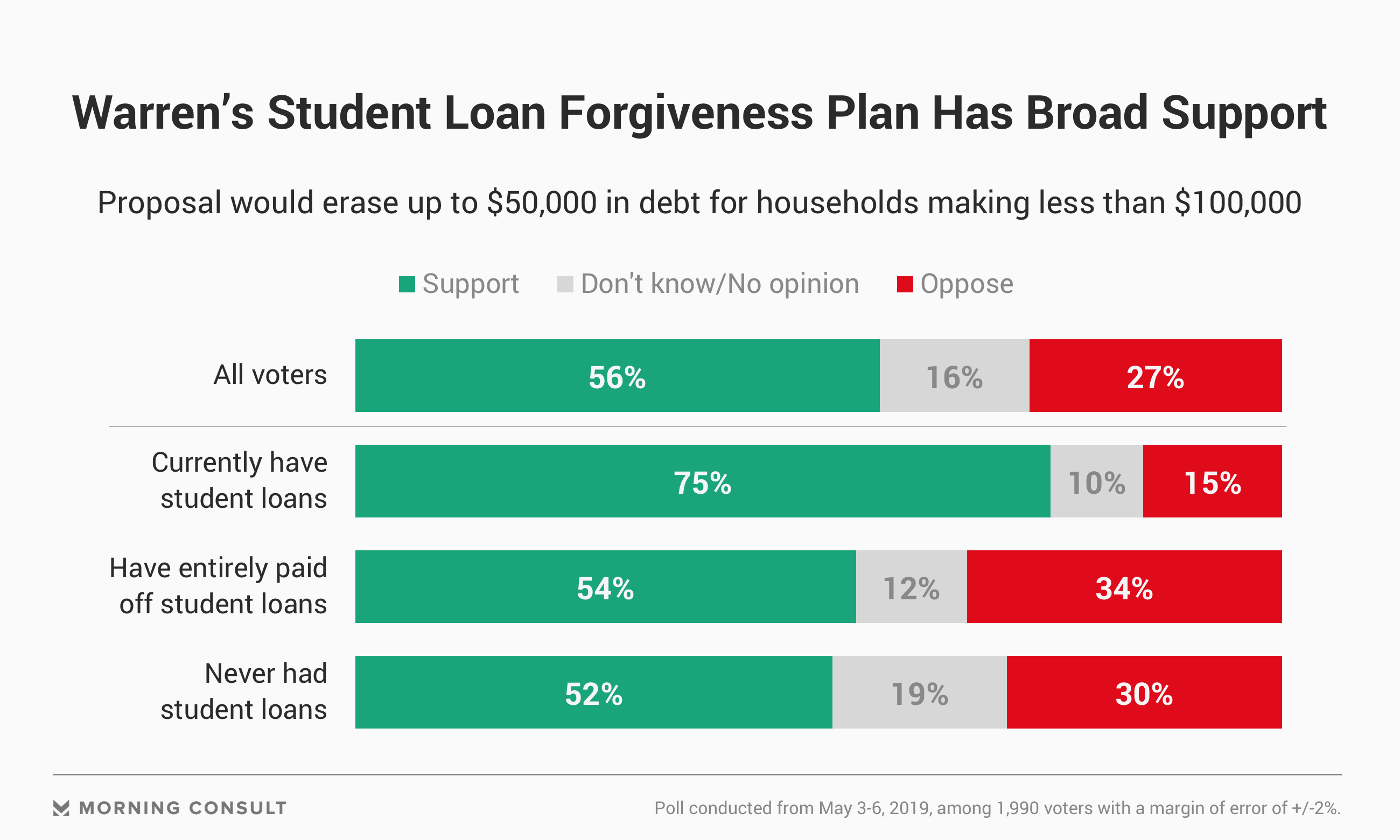 The student debt forgiveness proposal is popular even among voters who have never taken out student loans. A majority (52 percent) said they support the debt forgiveness plan, while 30 percent say they oppose it.

Voters who currently have student loans are the strongest supporters of Warren’s proposal, with 75 percent backing it and 15 percent opposing.

Those who have paid off their student loans are the most likely to oppose the plan at 34 percent. A majority (54 percent) still said they would support the proposal.

Democrats support the proposal more broadly at 77 percent compared to 11 percent who oppose it. A 47 percent plurality of Republicans oppose the plan, while 38 percent said they are in favor.

Related: Voters Say They Would Use Taxes on the Wealthy to Fix a Variety of Ills in the Nation

The other plank of Warren’s proposal — free public college tuition — had similar levels of support. Fifty-five percent of registered voters backed the plan, while 30 percent opposed it.

In a previous poll, 44 percent of voters said student loan debt poses a major threat to the United States, and an additional 36 percent said it poses a minor threat. Only 10 percent said it’s not a problem at all. That poll surveyed 1,995 voters from April 28-29 and has a margin of error of 2 percentage points.