Even most backers of Sen. Bernie Sanders’ plan are open to other options 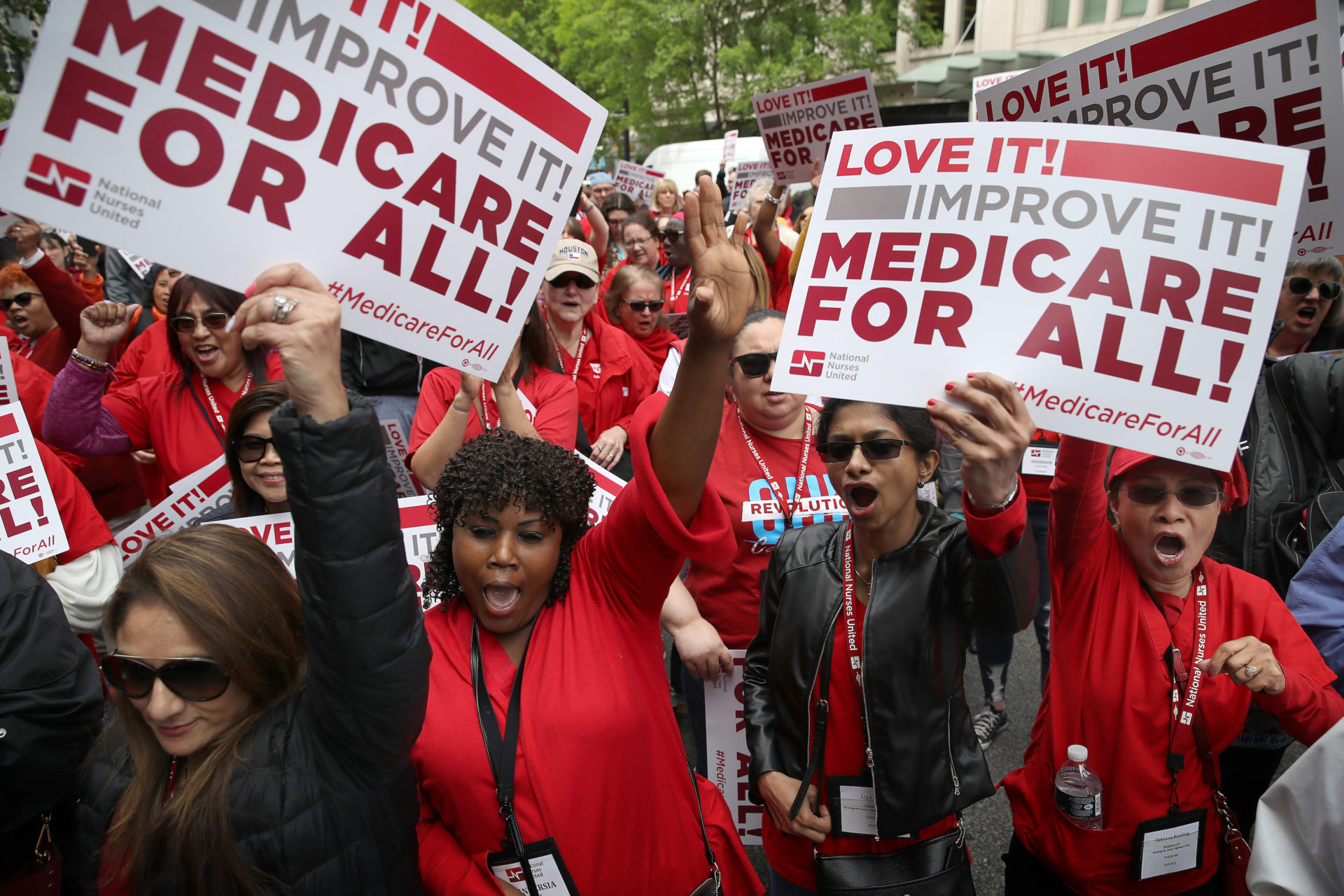 Protesters supporting "Medicare for All" hold a rally outside PhRMA headquarters in Washington, D.C., on April 29. (Win McNamee/Getty Images)
By Yusra Murad

Former Vice President Joe Biden sat on the sidelines during the earliest stages of the 2020 Democratic presidential primary, watching on as a number of other candidates backed “Medicare for All,” the single-payer health proposal championed by Sen. Bernie Sanders (I-Vt.), alongside several other pathways to universal health care.

When Biden finally launched his campaign in late April, he left no room for interpretation, side-stepping “Medicare for All” and embracing the public option. It’s a sharp contrast from the position held by Sanders, his current chief rival for the party’s nod to take on President Donald Trump.

“A public option or other buy-in plans fail to address the underlying problem in the U.S. health care system: corporate greed and profiteering off of the sick,” the Sanders’ campaign said via email last month. “They fail to simplify the current confusing and dysfunctional administrative system that makes up 17 percent of health care expenditures.”

That staunch opposition to anything other than a complete overhaul of the U.S. health care system has not been shared by the Democratic party’s other presidential aspirants, and a recent Morning Consult poll shows it’s not a consensus among Medicare for All supporters, either. 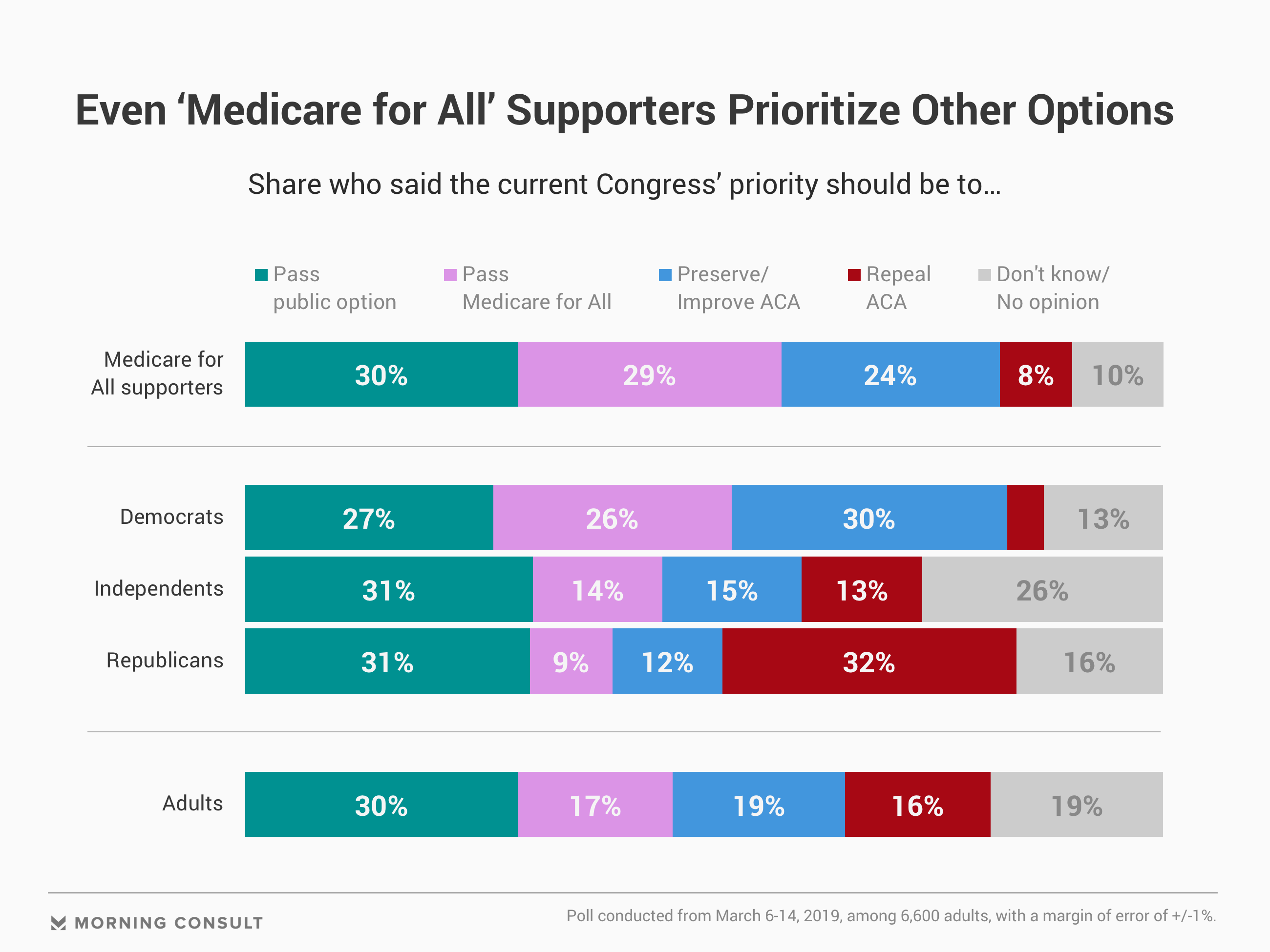 A March survey found that the 3,073 U.S. adults who backed Medicare for All were just as likely to say the current Congress should focus on passing a public health insurance option (30 percent), such as a Medicare or Medicaid buy-in plan that extends coverage to more or all Americans without eliminating the private market, as they were to prioritize Medicare for All (29 percent).

The data suggests that, in spite of the fervor for expanding health coverage, a majority of Medicare for All supporters, like all Americans, are leaning into their pragmatism in response to the current political climate — one which has left many skeptical that Capitol Hill can jolt into action on an ambitious proposal like Medicare for All quickly enough to wrangle the soaring costs of health care.

Sanders’ legislation has been co-sponsored by fellow 2020 Democratic presidential candidates, including Elizabeth Warren of Massachusetts, Kirsten Gillibrand of New York, Cory Booker of New Jersey and Kamala Harris of California — all of whom also support plans that sustain the private insurance market, in direct contradiction to Medicare for All.

“The candidates who jumped in for Medicare for All who subsequently signaled flexibility to achieving the policy objective did so due to their increasing nervousness about excessive disruption of employer-based coverage,” said Chris Jennings of Jennings Policy Strategies Inc., a consultant who advised the White House on health policy during the Obama and Clinton administrations.

Jim Manley, a Democratic strategist and former aide to former Senate Democratic Leader Harry Reid of Nevada, said it makes sense that Biden was the first candidate not to dance around Medicare for All and immediately place his bets with a less politically perilous alternative.

“Biden is someone who was there for Obamacare, and he’s still scarred from the experience,” Manley said. “He understands more than anyone how difficult it is to pass health care legislation.”

While Biden reflects the large swath of Democrats laser-focused on what they can comfortably secure, experts said, the progressive arm of the party is prepared to stomach a greater degree of disruption and financial investment in return for desired outcomes, reluctant to compromise on piecemeal solutions that protect health insurers and corporations ability to pocket unethical profits.

Sean McElwee, co-founder of progessive research firm Data for Progress, said Sanders has shown more of an interest in forcing a broader debate over the mechanics and morality of the country’s health care system than getting into the details of how it would be paid for.

Sanders and other Medicare for All advocates recognize that by making concessions each time they have the opportunity to pass health reform in the name of less disruption, McElwee said, Democrats are having to repeatedly relitigate health care, when they would rather move on to other issues important to voters, such as criminal justice reform and climate change.

Disagreements over health care between the two front-runners for the party’s nomination will come into sharper focus soon, with the first Democratic debates scheduled late next month.

Despite the potential discord sewn by those divisions, party leaders say they welcome the conversation.

Rep. Rosa DeLauro of Connecticut said last week that while “there may be others that view this as a divide,” she sees the proposals on the table in the House — from House Progressive Caucus Co-Chair Pramila Jayapal’s (Wash.) single-payer bill to DeLauro’s own “Medicare for America” plan, co-sponsored with Rep. Jan Schakowsky (D-Ill.) — as an opportunity to have a healthy, robust debate.

“If you really think about the big health care debates we’ve had over many, many years within the progressive movement, there has always been debate about which pathway to go,” Center for American Progress Chief Executive Neera Tanden told reporters on a call last week. “That’s healthy and important.”

And while Jennings said this ultimately isn’t a fight Democrats want to have, primaries are about drawing contrasts, and what’s most important is that the party comes together once it has chosen its nominee.

“Any successful run for presidency is defined by the ability of the candidate to unify the party post-convention,” he said.