As of May 10, 839 cases of measles have been reported across 23 states this year. Morning Consult polling shows that younger adults are more likely to say that vaccinations of childhood diseases should be a decision left up to parents. (Photo Illustration by George Frey/Getty Images)
By Yusra Murad

As the largest measles outbreak in the United States presses on with no signs of slowing, public health officials are escalating calls for lawmakers to crack down on exemptions that allow parents to refuse vaccinations for their children. According to new Morning Consult polling, it is young voters that are least likely to get on board.

In a May 10-12 survey, 72 percent of all voters said that when it comes to childhood diseases — such as measles, mumps and whooping cough — all children should be required to get vaccinations, while 19 percent said parents have the right to decline.

But younger Americans aren’t quite as sold on mandatory vaccinations, with 3 in 5 voters ages 18-29 saying all children should be required to get their shots. Just over a fifth maintained the choice should be left to parents (22 percent). Another 18 percent said they don’t know or have no opinion — almost four times the share of seniors who said the same (5 percent).

As Americans age, so too does their affinity for mandatory vaccination. Among adults between 30 and 44 years of age, the share that said all children should be vaccinated crept up to 66 percent. 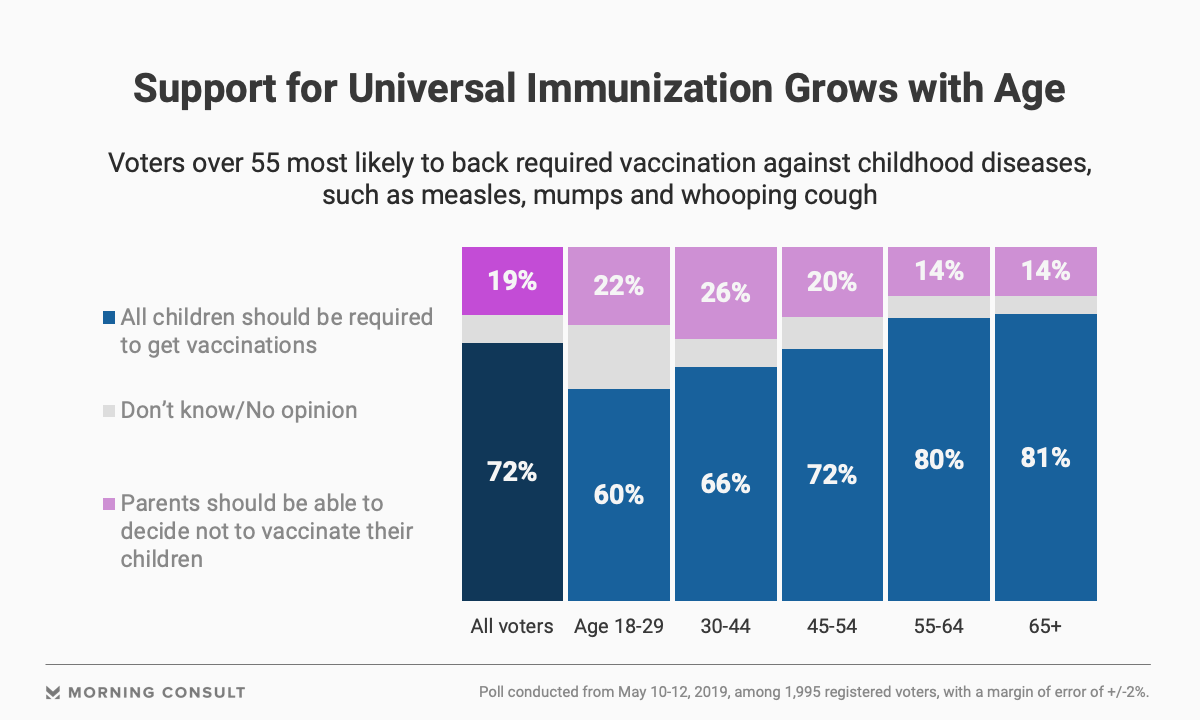 In this age group, 26 percent said parents can elect not to vaccinate their children, which is not statistically different from the share seen among the 18-29 and 45-54 age groups given the subsamples’ margin of error of about 5 percentage points.

Those over 55 years old overwhelmingly support universal immunization, with at least 80 percent in favor. The poll surveyed 1,995 voters, with a margin of error of 2 percentage points.

With the Centers for Disease Control and Prevention confirming 839 cases across 23 states as of May 10, when the survey was conducted, the current outbreak is the most aggressive in decades, quickly approaching the 963 cases reported in 1994. It has largely affected unvaccinated children, spurring state lawmakers to rethink their vaccine exemption laws and generating debate over whether parents should maintain the right to make medical decisions for their children even if they endanger public health.

The poll supports previous research finding younger adults are more skeptical of vaccines than their elders. A Pew Research Center survey released in February 2017 looking at generational views found adults 18 to 29 were not as likely to trust scientists’ conclusions on the health benefits of the measles, mumps and rubella (MMR) vaccine.

Measles was declared eliminated in the United States in 2000, when the oldest adults currently between 18 and 29 were no more than 10 years old.

State efforts to roll back protections for parents who refuse to vaccinate their children have faced backlash from some GOP lawmakers, opposed to what they view as government interference. The CDC and scientists have reiterated that such outbreaks cannot be contained if the population does not reach “herd immunity,” which requires vaccinating enough of the population to protect the entire community.

Republican respondents were almost twice as likely as Democrats to say parents should be allowed to not vaccinate their children (23 percent to 12 percent).