House Speaker Nancy Pelosi is feeling the heat on the question of impeachment, with more Democrats making public pitches for beginning proceedings to remove President Donald Trump from office — a shift that is reflected among the party’s voters.

Fifty-three percent of registered Democratic voters in the latest Morning Consult/Politico poll said impeaching Trump should be a “top priority” for Congress, nearing a previous high of 56 percent measured in early March.

It also represents a 10-point increase in impeachment fervor among Democrats since early April, when prioritization for beginning proceedings reached an ebb not matched since the beginning of the 116th Congress in January. That low mark followed several weeks of downward movement that came as the California Democrat went public with her view that the president was “not worth” the process of impeachment. 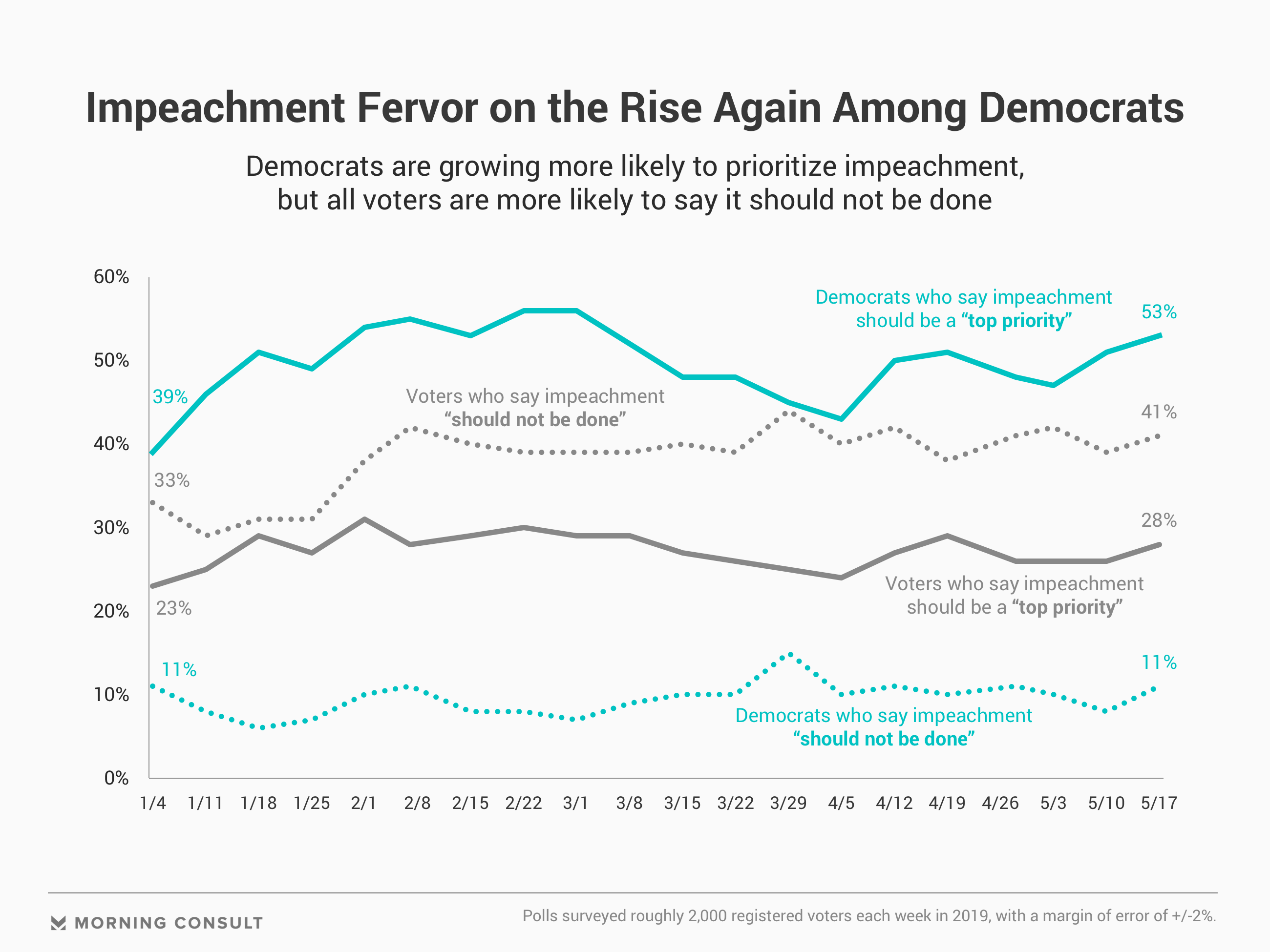 The Trump administration has rejected or fought several House Democratic oversight attempts, including a bid to get years of his tax returns, and other panels’ moves to obtain an unredacted version of special counsel Robert Mueller’s report and interviews with Trump officials who were involved in the probe of Russian interference in the 2016 election.

It leaves the speaker with a big decision ahead of the 2020 elections. While getting the ball rolling on impeachment is a no-brainer for most Democrats across the country, it is unpopular among the broader electorate, with a 41 percent plurality in the latest poll saying it should not be done at all, close to a high of 44 percent in March.

“Our members are much like where the American people are on impeachment,” House Intelligence Committee Chairman Adam Schiff (D-Calif.) said Wednesday at a forum in Washington hosted by the Center for American Progress, acknowledging that the issue has divided the House Democratic Caucus.

Speaking a little later at the same CAP event, Pelosi rejected the notion that her party was worried about the political implications of a messy impeachment process that could be dead on arrival in the Senate.

“If the facts take us there, that’s where we have to go,” she said. “It has nothing to do with politics.”

Some Democratic lawmakers say they must be prepared to use every tool available to hold accountable a president they say is flouting the law and undermining their constitutional authority, with both Pelosi and Schiff on Wednesday discussing the Trump administration’s efforts to stymie oversight. Still, many lawmakers believe that voters did not put them in charge of the House in order to remove Trump from office, and that the issue is distracting the party from making its case to the American people on issues they ran on in 2018, including health care and the economy.

The outlook for any substantive policy achievements looked bleak Wednesday, for both parties. Pelosi and Senate Minority Leader Chuck Schumer (D-N.Y.) said Trump stormed out of their meeting that had been scheduled to discuss how to pay for a more than trillion-dollar infrastructure plan after Pelosi had earlier told reporters that he was engaged in a “cover-up.”

In a Rose Garden news conference, Trump vowed not to work with Democrats as long as they continued to investigate him.

“I want to do infrastructure,” he said, “but you know what, you can’t do it under these circumstances. So get these phony investigations over with.”