As anti-abortion activists target Roe v. Wade, most of the electorate also opposes overturning the 1973 precedent 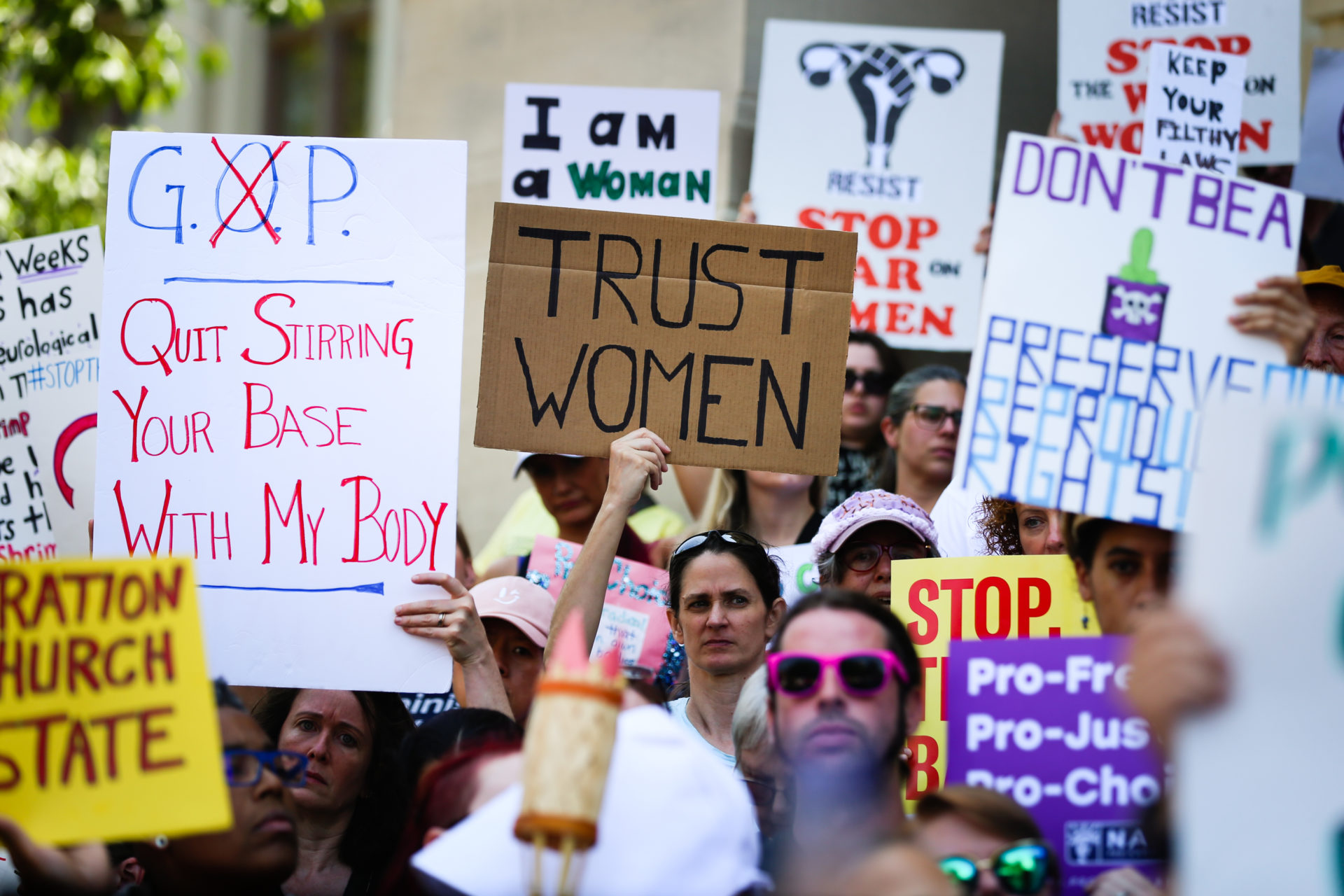 Women hold signs during a protest against recently passed abortion ban bills at the Georgia State Capitol building on May 21 in Atlanta, Ga. Although the debate on abortion features exceptionally polarized extremes, with advocates of either complete prohibition or unconditional legality dominating the conversation, new Morning Consult polling finds that a majority of Americans take a more nuanced approach somewhere in the middle. (Elijah Nouvelage/Getty Images)
By Yusra Murad

Republicans seeking to restrict access to abortion went further than ever this month, with conservative officials in Georgia and Alabama enacting the two strictest bans in the nation — and a new Morning Consult/Politico survey finds that most voters think those states went too far.

Fifty-six percent of registered voters in the May 17-19 survey said they opposed states passing laws similar to the Alabama Human Life Protection Act, which outlaws abortion in any case where the mother’s life is not in danger, and Georgia’s Living Infants Fairness and Equality Act, which bans abortion after the detection of fetal cardiac activity — generally around six weeks. Forty-four percent of the 1,995 voters polled were strongly opposed to the laws, compared with one-third who supported them. 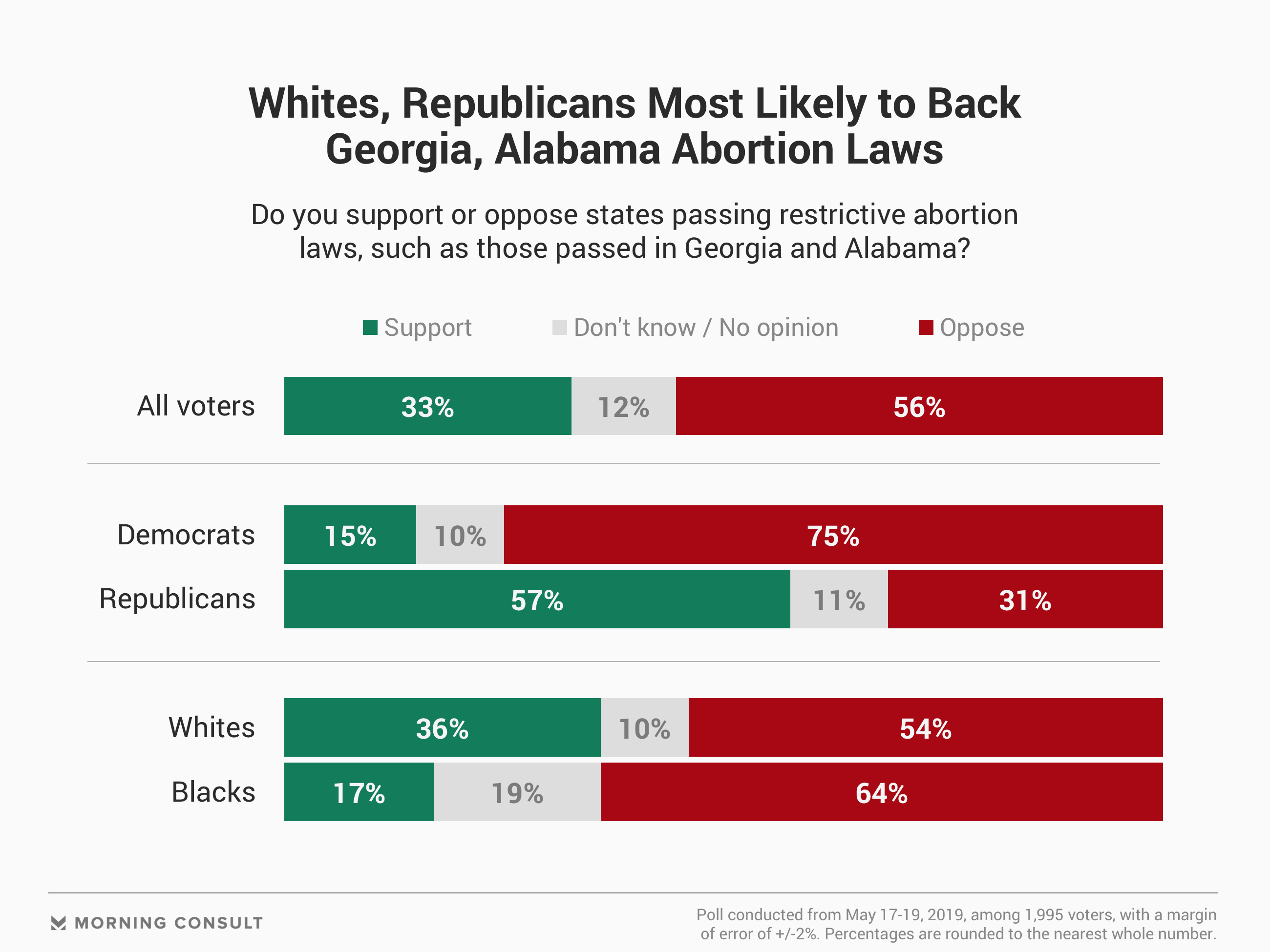 Coverage of the new laws has resonated deeply with the electorate, with 51 percent of voters in the survey said they’d seen, read or heard “a lot” about them, more than nearly all of the news items Morning Consult has tested in 2019.

Alabama’s ban, in particular, has elicited a response from top Republicans. President Donald Trump, Senate Majority Leader Mitch McConnell (R-Ky.) and House Minority Leader Kevin McCarthy (R-Calif.) have all distanced themselves from the law, reiterating their support for abortion in cases of rape, incest or when the mother’s life is in danger.

Both laws were penned with the intention of triggering a challenge to Roe v. Wade, the 1973 Supreme Court case that established a person’s right to choose having an abortion until the point of fetal viability (when the fetus could survive outside the uterus). The confirmation of conservative Justices Neil Gorsuch and Brett Kavanaugh to the high court has emboldened anti-abortion lawmakers, who are optimistic that the ruling could be overturned, returning the rights on the issue to state governments.

The survey, which has a margin of error of 2 percentage points, found that most voters (52 percent) would oppose such a decision, compared with 27 percent who would support overturning the precedent.

While much of the debate features polarized extremes, with advocates of either complete prohibition or unconditional legality dominating the conversation, the data shows most Americans take a more nuanced approach. 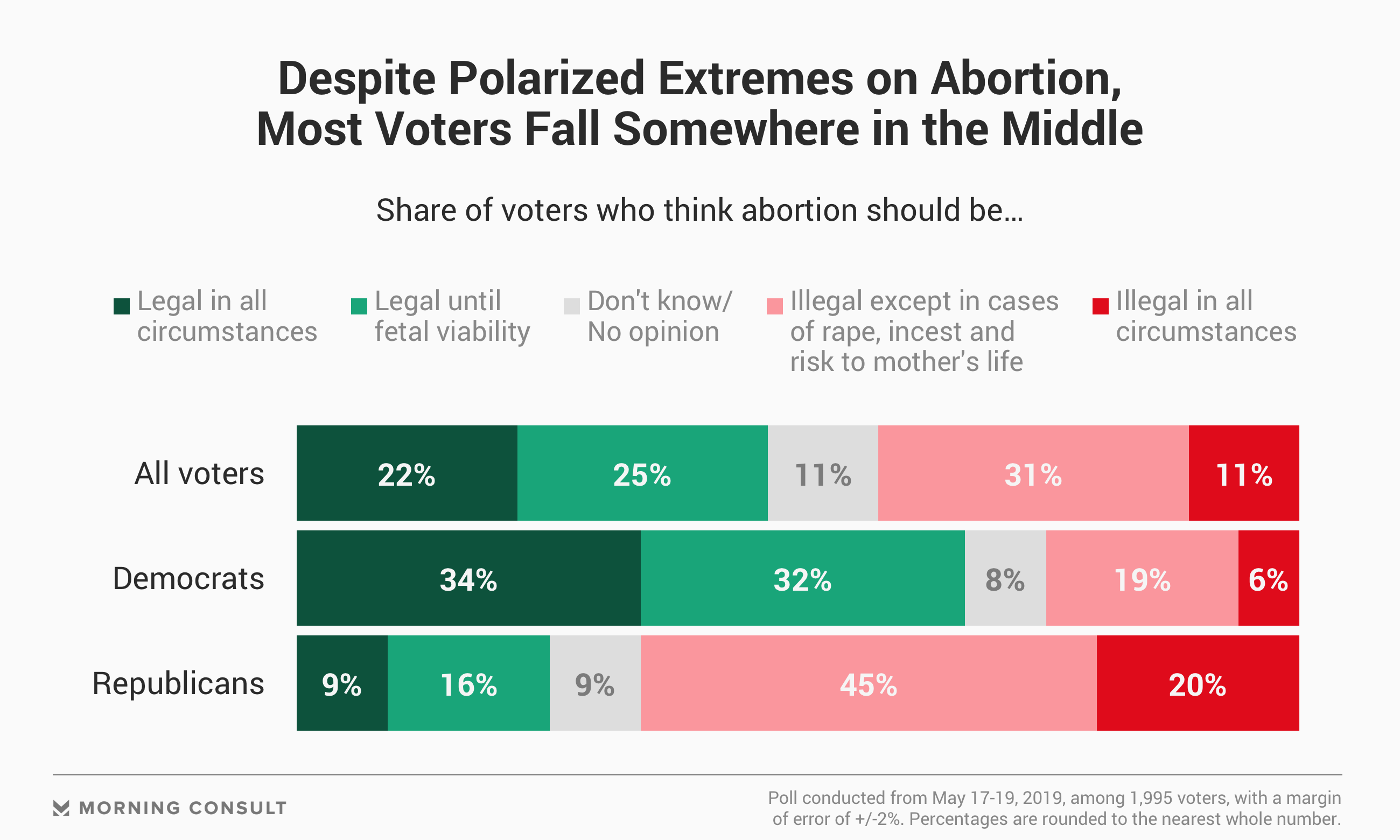 One-third of voters place themselves on either end of the spectrum: Twenty-two percent of voters say abortion should be legal in all circumstances, and 11 percent think it should never be legal. More than half of voters either believe abortion should be legal until the point of fetal viability (25 percent) — between 24-28 weeks, per Roe v. Wade — or illegal except in the case of rape, incest or risk to the mother’s life (31 percent).

While a fifth of the GOP electorate supports total prohibition, a plurality (45 percent) believes abortion should remain legal in cases of rape, incest or when the health of the mother is jeopardized.

The survey also found that most voters are unaware of how common abortions are in the United States. While a quarter of voters correctly said one in four women will have an abortion (as estimated by the Centers for Disease Control and Prevention), 59 percent of voters believed 10 percent of women or less undergo the procedure.

However, whether voters knew how often abortions occurred or not had virtually no bearing on their opinions on the measures taken in Alabama and Georgia.