‘Medicare for All’ Advocates Strategize to Win Over the Working Class 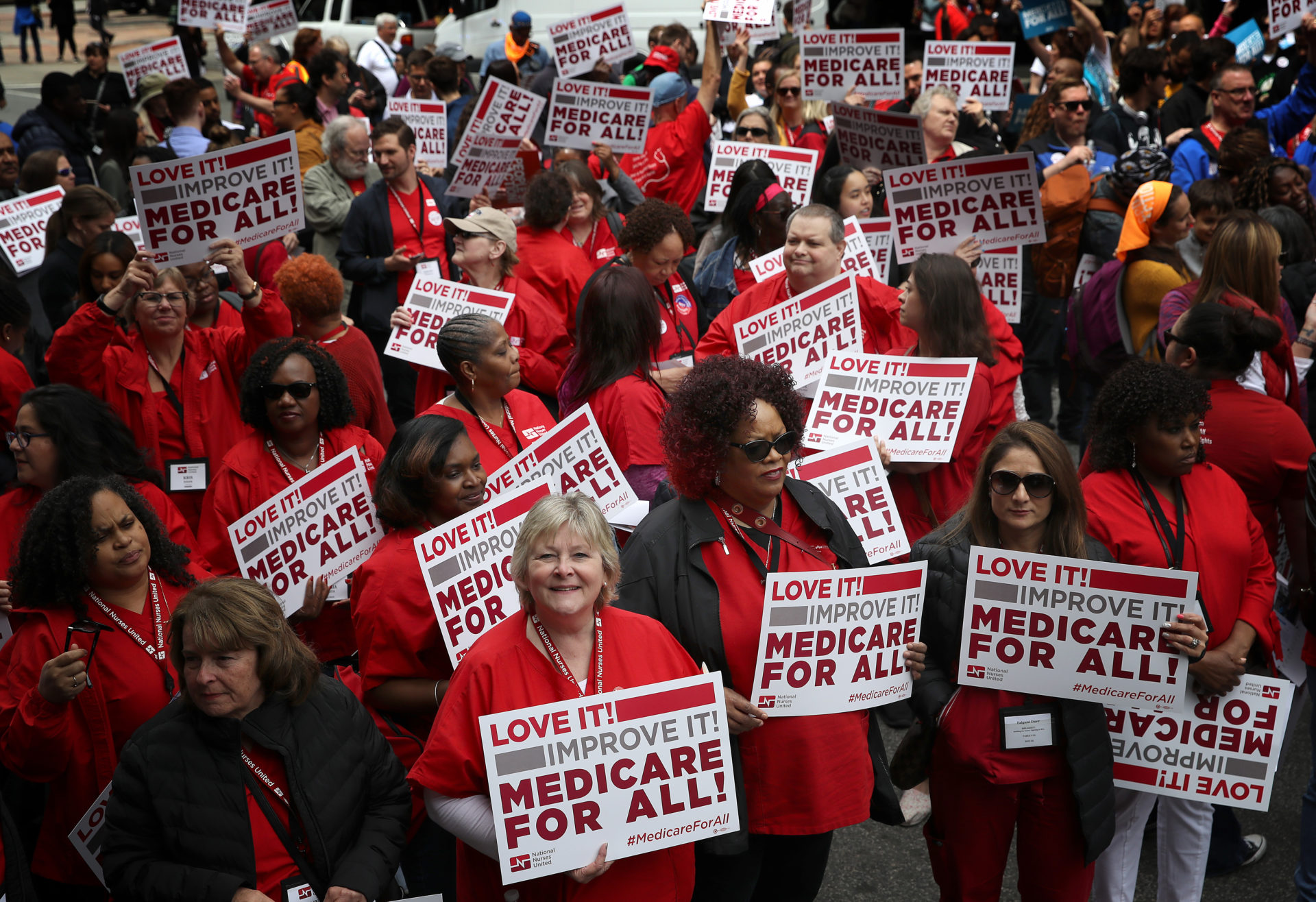 Supporters of “Medicare for All” hold a rally outside PhRMA headquarters April 29, 2019, in Washington, D.C. Single-payer advocates are mobilizing around a new strategy to keep the energy around their cause alive: positioning “Medicare for All” as a working-class issue that is designed to bolster the economy and ignite wage growth after decades of stagnation. (Win McNamee/Getty Images)
By Yusra Murad

Undeterred by accusations of socialism from Republicans and cautious skepticism from the Democratic establishment, single-payer advocates are mobilizing around a new strategy to keep the energy around their cause alive: positioning “Medicare for All” as a working-class issue that is designed to bolster the economy and ignite wage growth after decades of stagnation.

Even as some Democratic candidates vying for the party’s nomination for president pass over full-fledged single-payer plans and align with the public option, often billed as the politically agreeable and modest alternative, lawmakers and activists on the frontlines of the push for Medicare for All — led by Rep. Pramila Jayapal (D-Wash.) — do not intend to settle for what they view as thinly veiled attempts to further enshrine the role of private insurers in the U.S. health care system.

But advocates know if Medicare for All is to garner additional momentum, the fervor of the progressive base must extend to the working class, a voting bloc critical for a Democratic victory in 2020.

Jayapal, co-author of the Medicare for All legislation in the House, said she remains confident as ever that Congress is moving in the direction of universal health care — especially given that her bill has a larger labor coalition on board than ever before.

As the cost of employer-sponsored health care continues to rise, “a lot of labor has come to understand that they’re leaving wages on the table by having to pay for health care,” Jayapal said. By taking health insurance off the bargaining table, she argued, workers are empowered to fight for other issues that are important to them.

Kelly Coogan-Gehr, the assistant director of public and community advocacy for National Nurses United, said the union has been on the ground, canvassing, door-knocking and explaining to Americans in town halls that under the current system, employers use health insurance to disempower working people across the country.

NNU, the largest organization of registered nurses in the country, is one of several progressive organizations leading the grassroots movement for Medicare for All, alongside groups such as Public Citizen and the Center for Popular Democracy.

The argument that Medicare for All could directly counter wage stagnation is incredibly persuasive among workers, Coogan-Gehr said. If unions no longer have to exercise their power to bargain for better health care, it will open up “a world of issue fights,” she said, allowing employees to use their collective bargaining power to negotiate raises and make new demands on everything from safe staffing to workplace safety.

“Because of the attachment of health insurance to one’s job, workers have been less willing to take direct action, to strike, to exercise basic rights to reconsolidate their power in the workplace,” Coogan-Gehr said.

At a House Budget Committee hearing on single-payer systems May 22, Rep. Tim Burchett (R-Tenn.) decried single-payer as “socialized medicine” — a boilerplate talking point from the Republican party —  and a system that would “collapse on itself.” Rep. Ro Khanna (D-Calif.), the first vice chair of the Congressional Progressive Caucus, countered that a single-payer system would in fact directly stimulate wage growth by relieving employers of the burden of inflating premium costs.

The average annual premium for employer-based family coverage rose to $19,616 for single coverage in 2018 — a sum that has been steadily rising over the past several decades — while today’s average wage, after accounting for inflation, has roughly the same purchasing power it did 40 years ago.

Top officials from the Congressional Budget Office testified that Medicare for All could both generate significant cost-savings for employers and increase worker salaries.

“We would expect employers to pass back most of that in the form of other compensation or wages,” said Jessica Banthin, CBO’s deputy assistant director for health, at the hearing.

Most economists would not describe that as socialism, Khanna said, “unless you believe that reducing people’s costs and increasing their wages is socialism.”

Focusing on the economic advantages of single-payer is a powerful strategy, with the potential for enticing even Republicans, advocates argue. David Steil, president of Micro Trap Corp., an electronic and electromechanical equipment manufacturer, and a former Republican state legislator, said his tenure in the Pennsylvania House of Representatives cemented his support for a single-payer system — which has only grown in his role as a small business owner.

Related: Why Biden’s Cold Shoulder on ‘Medicare for All’ Is a Safe Bet Politically

The key to getting Republicans and the working class on board with single-payer, Steil said, is homing in on its potential as a low-cost strategy to bolster the free market.

“Businesspeople want the marketplace to govern the delivery of services. When you take the insurance companies out, it means patients select their own doctors and their own hospitals,” Steil said. “That is the epitome of a free-market system.”

For the most part, Americans support Medicare for All, though their opinion of enacting such a system fluctuates depending on the fine print. In a recent Morning Consult survey, a 54 percent majority of registered voters said they support Medicare for All, with voters earning $50,000 or less annually more likely to support it than voters earning $100,000 or more by a margin of 10 points (58 percent to 48 percent).

Melinda St. Louis, Public Citizen’s campaign director for Medicare for All, said that at the local level, “the partisan divide on this melts away.” Small business owners and working-class Republicans acknowledge that single-payer is the obvious solution, she said. But while GOP lawmakers are falling in line with the demands of powerful players in the health industry, “that’s not where their base is.”

Single-payer is a working-class issue and a business issue, Steil concurred. Small business owners’ health care costs are enormous, and they struggle negotiating with insurance companies.

Public Citizen, National Nurses United and other groups leading the charge are betting on winning over the working class with the message that Medicare for All will not only deliver quality health care, but return money to their wallets.

“You see it across the country, the way workers are striking and organizing and galvanizing — it’s around health care,” Coogan-Gehr said. “Health care is the number-one issue of working people in this country right now.”