Most 2020 Democrats Aren’t Breaking Through in Crowded Field

Since Biden’s entrance, name recognition growth has stalled for his Democratic rivals

There hasn’t been much oxygen in the room for most of the 2020 Democratic contenders trying to break through to the party’s voters.

Since former Vice President Joe Biden formally announced his candidacy for the Democratic nomination last month, little has changed in the share of Democratic primary voters who have formed views about the other candidates — and most of them have seen little to no movement throughout the year, according to Morning Consult’s weekly primary tracking.

No candidate has seen an increase in name recognition bigger than 3 percentage points since Biden’s April 25 announcement, compared with larger upward swings earlier in the year.

Biden, the race’s front-runner throughout all of 2019, along with Vermont Sen. Bernie Sanders, who has maintained a second-place position throughout the year, are both nearly universally known among primary voters.

Others, including Massachusetts Rep. Seth Moulton, California Rep. Eric Swalwell and Washington Gov. Jay Inslee, have yet to top 50 percent in the name-recognition polling, though Inslee has seen an 11-point increase since February in the share of primary voters who have heard of him. 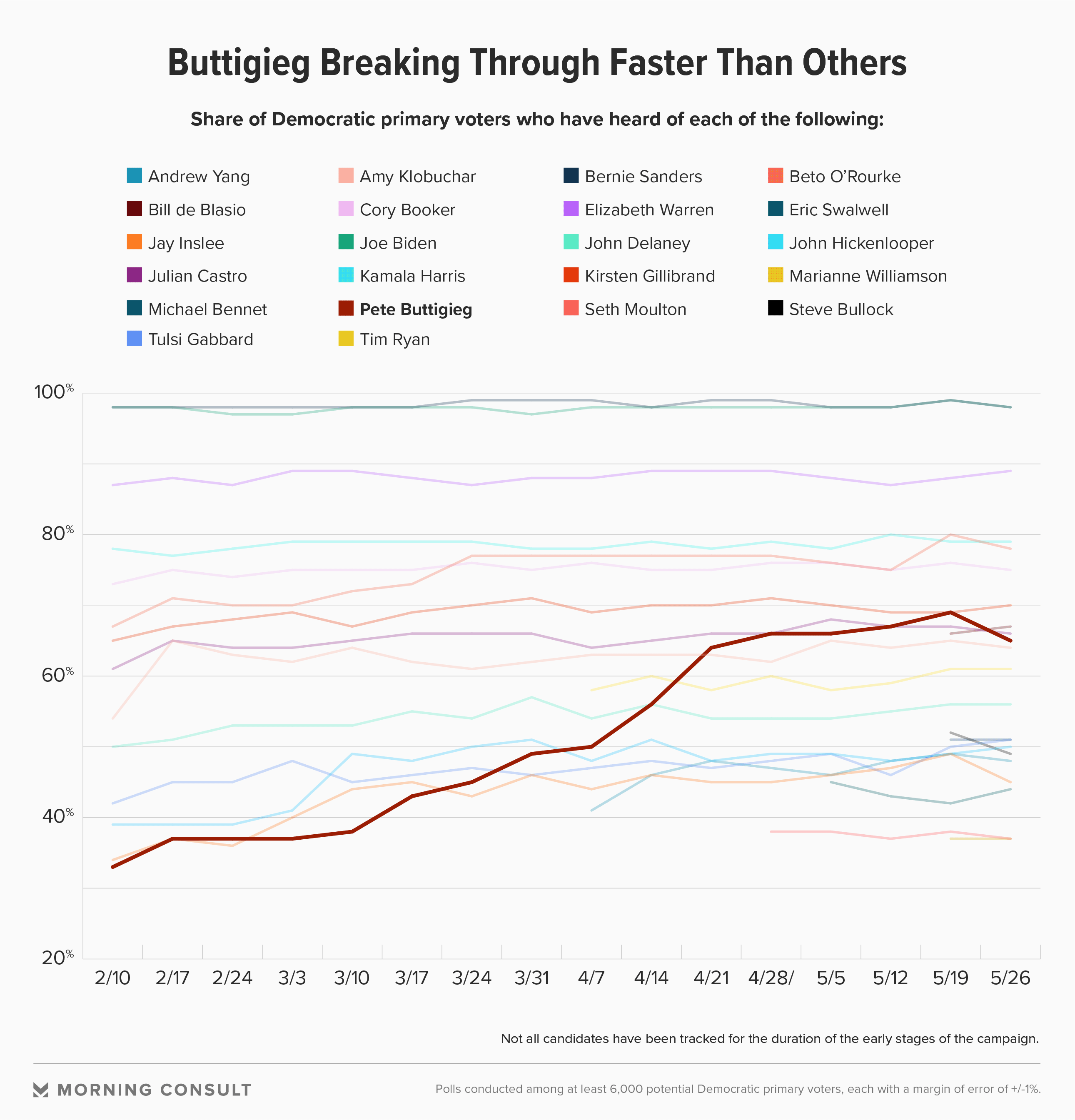 South Bend Mayor Pete Buttigieg of Indiana has seen the biggest increase in name recognition, from 33 percent in early February to 65 percent in the latest survey. But even that quick rise slowed with Biden’s formal entrance, and it places Buttigieg’s name recognition in the same tier as candidates such as former Housing Secretary Julián Castro and New York City Mayor Bill de Blasio, who aren’t garnering similar media attention on the campaign trail or drawing support as voters’ first choice.

Adrienne Elrod, the director of strategic communications for Democrat Hillary Clinton’s 2016 campaign, said Buttigieg is the “prime example of someone who capitalized on key moments early on.” She said other candidates struggling to break out in “today’s noisy media environment” should not turn down media town-hall events — including those on Fox News — and “aggressively pursue” coverage in the local press.

Elrod said the first debate, set for June 26-27, is “expected to be the most widely watched presidential campaign debate in history,” and will feature a “series of grand attempts to have breakout, viral moments that candidates and campaigns can use to fundraise and circulate to an even broader audience.”

The rules the Democratic National Committee has set to qualify for the first matchups require candidates to either reach 1 percent in a list of polls selected by the DNC, or register at least 65,000 unique donors and a minimum of 200 donors per state in at least 20 states. If more than 20 of the candidates qualify, the DNC has said it will use a combination of both metrics.

Related: Most Democrats Are Fine With Their Candidates Doing Fox News Town Halls

Candidates such as Moulton and Colorado Sen. Michael Bennet are not known to have met either threshold, while candidates viewed as long shots to the nomination, such as businessman Andrew Yang and author Marianne Williamson, both appear to have qualified, their campaigns have said.

Nathan Gonzales, a nonpartisan political analyst and publisher of Inside Elections, said candidates who aren’t well known will “have to be strategic and memorable with limited time on a crowded stage.”

For the third debate, the criteria gets more stringent. According to rules the DNC announced Wednesday, candidates will need 2 percent support in the polls and 130,000 unique donors — including 400 from 20 states — to qualify for the Sept. 12 debate.

Elrod said she does not think missing the September debate stage is necessarily a candidate’s death knell, adding that she expects some candidates to figure out how to stay in the game.

And Gonzales said trouble breaking through early on can be corrected by a focus on the primary map.

“Looking further down the line, performing well in Iowa and New Hampshire could help boost a candidate nationally,” he said. “That might be easier than trying to boost your name ID nationally.”