In Data-Driven World, Consumers Likely to Overestimate Their Information’s Value

Disparity between what people think data is worth, what industry pays for it poses challenge to tech equity talks

Yet in California, the policy idea is gaining momentum following a push from Gov. Gavin Newsom (D), with a newly established tech equity commission looking into ways that Silicon Valley’s wealth can be distributed to the state’s residents. Meanwhile, Democratic presidential candidate and entrepreneur Andrew Yang has floated the idea of funding a universal basic income through a tax on big tech companies.

New survey data, however, points to at least one factor that could challenge the development of these ideas: the disparity between what consumers think their data is worth and what industries, including the advertising and marketing sectors, are actually paying for it.

A Morning Consult survey, conducted April 4-7 among 2,200 U.S. adults, asked respondents to put a dollar amount on how much they think different pieces of their personal information are worth, gauging the monetary value for public information such as someone’s full name and mailing address as well as privately sensitive information including passport numbers and DNA. 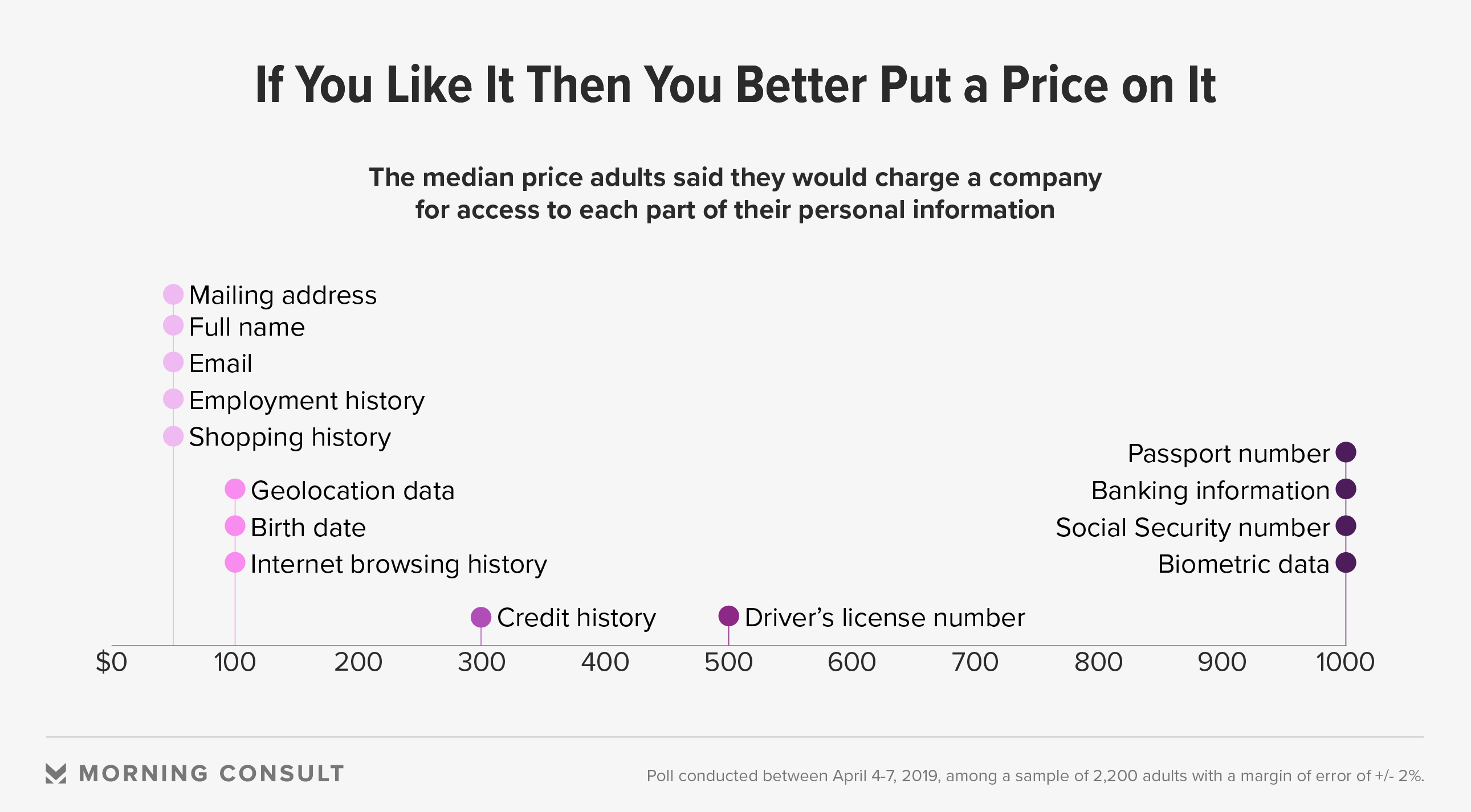 Median average responses varied: On the lower end, a consumer’s email address, shopping history, full name, mailing address and employment history all came in at $50 a piece, while the most sensitive information — biometric data, banking information and Social Security number — garnered the highest average of $1,000.

Experts say consumers don’t typically think of their data in terms of dollar amounts: When submitting an email address for inclusion in a retailer’s loyalty program, for example, customers don’t consciously acknowledge how a retailer can then profit off that piece of information or the possible security ramifications if the email address is obtained by a third party through a data breach. And experts say that because companies aren’t exactly boasting about the value they get from oftentimes cheap data, it makes it difficult to know how much data is worth.

“There’s no transparency to the data exchange at all,” said Elizabeth Gettelman Galicia, vice president of policy at Common Sense Media, an advocacy group that’s behind a few tech equity plans in California. “There isn’t any sort of table people can go to or some sort of conversion from kilometers to meters to show what happens with the data point. It’s tough to know where to start.”

Natasha Duarte, privacy and security policy analyst at the Center for Democracy and Technology, said most data brokers are paying far less for this information than respondents believe it’s worth — even though the data garners more value as it’s distributed to advertisers, marketers and a vast number of other players to personalize services and learn more about the consumers they’re targeting.

For instance, on the dark web — where consumer data usually lands after a hack — a Social Security number can be sold on average for $1, while driver’s license information and loyalty program data are sold for $20 on average, according to research earlier this year by credit reporting agency Experian PLC. Passport information is one of the most lucrative items on the dark web, with prices ranging from $1,000 to $2,000, per Experian.

However, the ranking of these monetary values still speaks to what consumers want to see protected in any forthcoming federal privacy legislation, with Social Security numbers (95 percent), biometric data (94 percent) and driver’s license numbers (94 percent) ranked highest in importance, per the survey.

The reverse can be said for the kinds of data consumers said they feel comfortable giving to companies in exchange for discounts and deals: Email addresses (52 percent), shopping histories (49 percent) and full name (45 percent) topped the list.

Jeff Greenfield, chief operating officer and co-founder of advertising technology company C3 Metrics Inc., said consumers often don’t understand that they’ve already given the companies permission to look at their personal information, such as a credit report and email address, in exchange for services or savings deals like coupons.

“The more realistic amount is instead of $50 for your address, it’s every time a brand wants your address and you want to give it up. It’s going to be more likely cents and pennies,” Greenfield said.

A 2015 report from the University of Pennsylvania’s Annenberg School for Communication suggests most consumers aren’t fully aware of how marketers use their information but have become resigned to the powerlessness of the situation. Ninety-one percent of the 1,506 adults surveyed in the report disagreed with the idea that a discount or deal is a fair exchange for a company collecting information about them without their knowledge, but 65 percent said they accept that they have little control over what marketers are able to learn about them online.

“There is really no good way for an individual to follow or cognitively process the number of transactions that their data can go through, the number of times it changes hands and whose hands it’s in,” Duarte said. “It’s not really anything that anyone has the time and capacity to go about figuring out.”

In many cases, consumers don’t fully understand the value of their information until a data breach happens, which Greenfield said is also when a company typically decides to make broad efforts to protect consumer privacy.

High-profile data breaches and debates about how to protect consumer data have started conversations about sharing in the wealth of tech companies to the forefront: Newsom proposed the idea of a “data dividend” during his State of the State address in February. And although Newsom stopped short of providing details on what such a plan would look like, it was enough to spark interest, yielding support from a plurality of all registered voters (45 percent) in a Morning Consult poll conducted Feb. 15-19.

In April, California established a state-run commission to examine the best approaches to ensuring equity between tech companies and California residents, whether it be through a state tax on companies or a revenue-share program similar to Alaska’s dividend program built on oil companies’ revenues.

Meanwhile, Yang, one of the roughly two dozen candidates running for the Democratic presidential nomination, arguably has carried the concept a bit further, raising the idea on the campaign trail of taxing large tech companies to fund his proposal for a universal basic income, or a monthly payment of $1,000 to every U.S. adult.

But consumers aren’t only worried about wealth inequality from companies fueled by data collection, said Salome Viljoen, a fellow at Harvard University’s Berkman Klein Center for Internet and Society. The monetary solutions being discussed, she noted, don’t solve the issues of democratic and political vulnerability springing from that collection, such as 2016 election interference practices on Facebook Inc.

“They don’t get at the feelings of, ‘Oh my gosh, these companies are collecting information about us and it’s being used to influence elections, and I have no control over that,’” Viljoen said.

However, as state privacy laws, such as the one in California, go into effect next year and the industry watches for any pending federal legislation, consumer personal information has the potential to become a more precious resource to advertisers and marketers, Greenfield said.

“The price of data is going to go up considerably, and that is in direct relationship to the California privacy act, the Massachusetts one and the pending federal one,” Greenfield said.

“Whatever advertisers pay now is going to potentially double within the next 18 months,” he added.