Policies to deter immigrants could wound health care workforce, which is dependent on immigrant labor 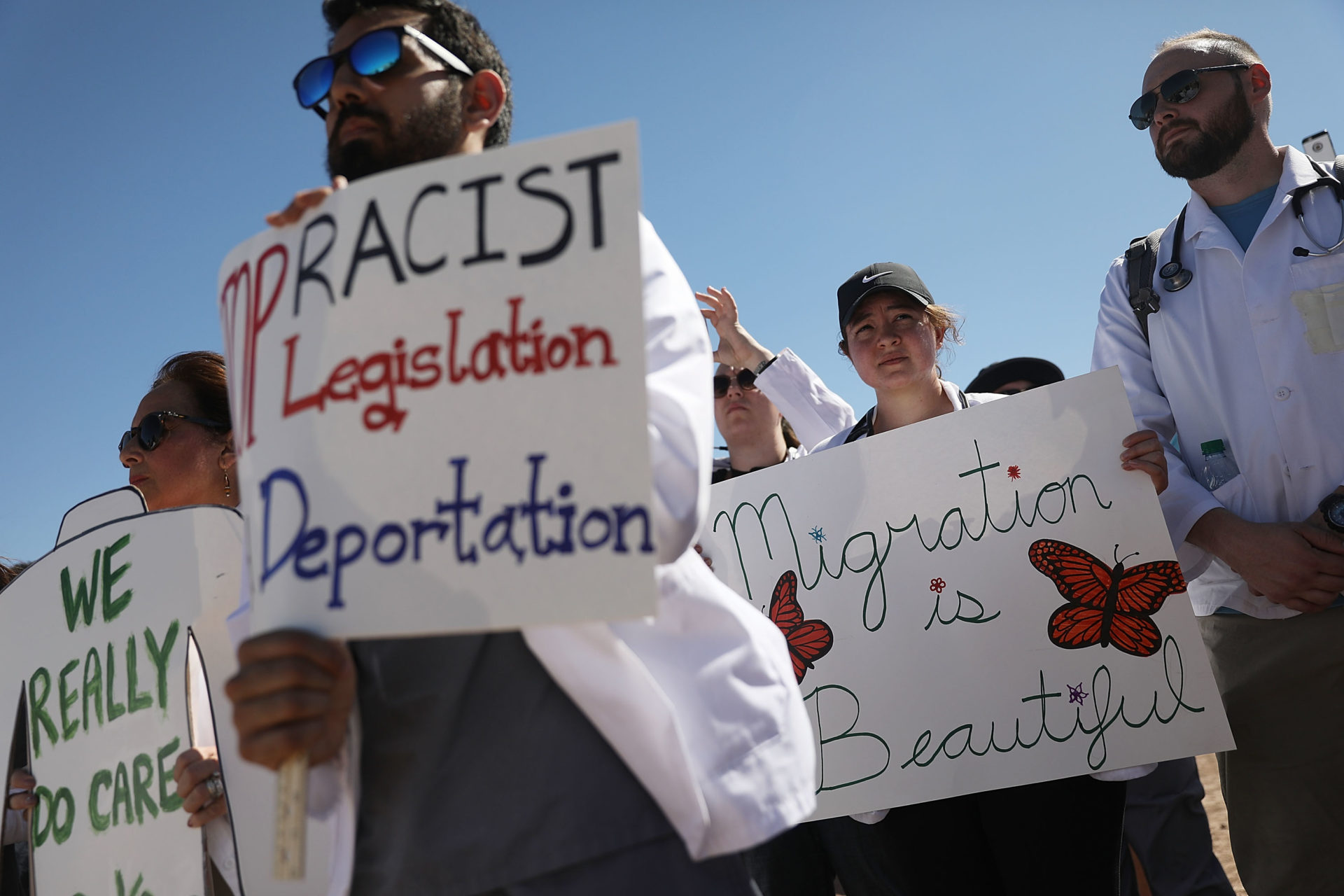 Health care professionals protest outside the tent encampment near the Tornillo-Guadalupe Port of Entry on June 23, 2018, in Tornillo, Texas, where they were showing their support for the children and their families affected by the Trump administration's zero tolerance policy. (Joe Raedle/Getty Images)
By Yusra Murad

The Trump administration’s efforts to curb immigration could have consequences for a quickly growing share of the U.S. population: the elderly.

That’s according to a new study published in Health Affairs, which found that immigrants make up nearly 1 in 4 workers in the formal and nonformal long-term care sector and over a quarter of direct care workers. President Donald Trump’s proposals to reduce immigration, paired with rhetoric dissuading foreign-born workers from migrating to the United States, could have a deleterious effect on seniors and people with disabilities, the researchers concluded, especially as federal health officials prepare for already inevitable shortages in the health care workforce. 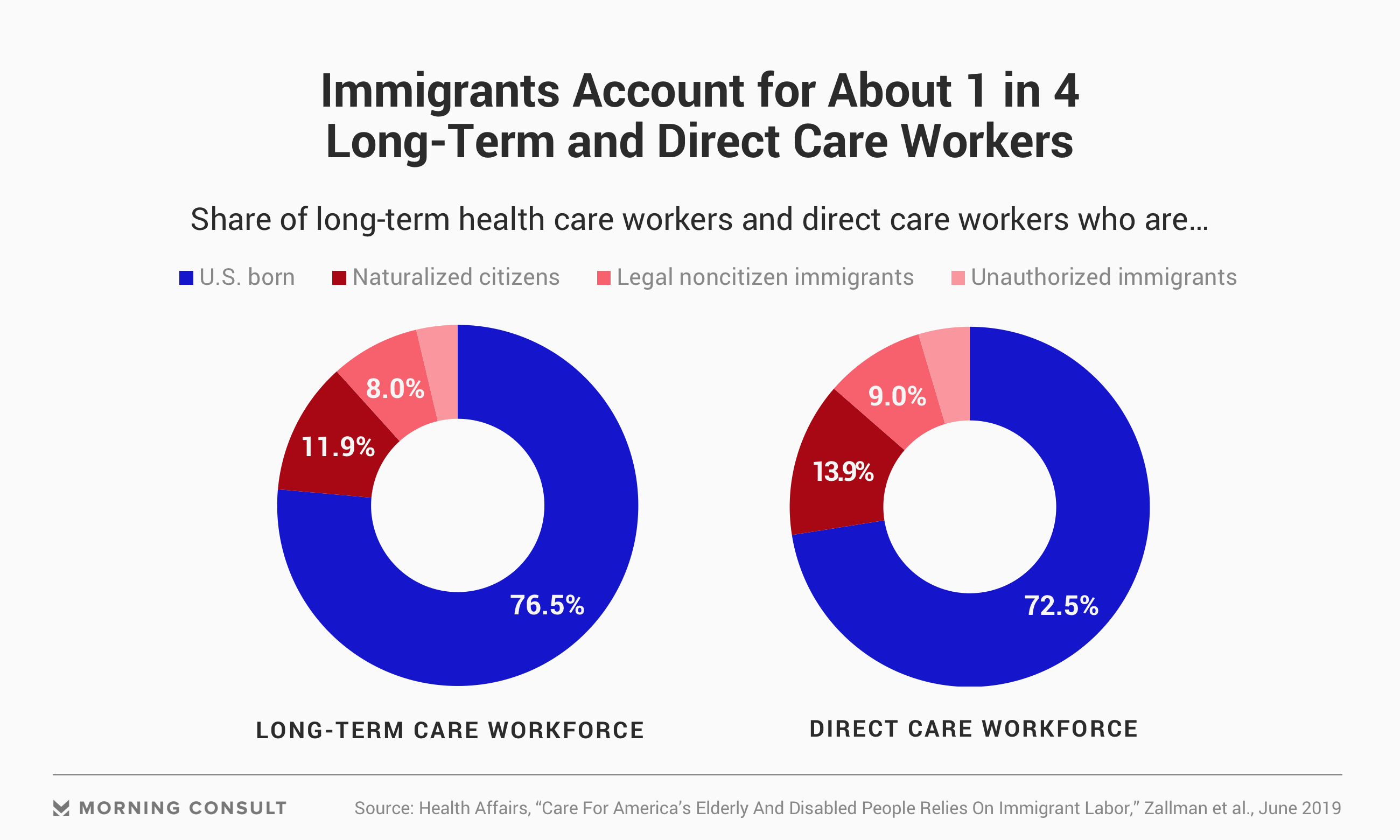 Millions of Americans rely on direct care workers, such as nurse aides, home health aides and personal and home care aides, for daily assistance. There was a demand for roughly 2.3 million workers in 2015, according to the Department of Health and Human Services, and as the population ages, that is expected to inflate to 3.4 million by 2030.

Steffie Woolhandler, a primary care physician, researcher, health policy professor at Hunter College and City University of New York, and lecturer in medicine at Cambridge Health Alliance/Harvard Medical School, said the U.S. health delivery system — both the payment for it and the labor force — is deeply dependent on immigrants.

“When Trump tries to discourage immigration, he is actually going to be harming the health care system,” Woolhandler said.

The team of researchers, led by Leah Zallman, the director of research at Harvard’s Institute for Community Health, analyzed data on U.S.- and foreign-born workers in the formal long-term care sector, nursing homes and home care agencies, and caregivers employed by households and nonmedical residential facilities (defined as the “nonformal” long-term care sector).

In total, 18.2 percent of all health care workers in 2017 were immigrants. In the long-term care sector (both formal and nonformal), immigrants accounted for 23.5 percent of the workforce. That share rises to 27.5 percent in the direct care sector, with nearly 1 in 3 working in home health agencies.

The health care workforce is not just enhanced by immigrant labor — it is reliant on it, Woolhandler said, especially in rural areas, where the share of foreign-born and foreign-trained workers becomes even higher.

Cracking down on immigration into the United States, both authorized and unauthorized, has been a cornerstone of Trump’s first term. Consequences of the administration’s travel ban, which applies to predominantly Muslim nations, have been documented, as the number of foreign-born doctors, researchers and academics seeking to establish their careers in the United States has dwindled in recent years.

But at the other end of the occupational spectrum, the workforce responsible for the hands-on care of patients, especially the chronically ill and elderly, is also dependent on foreign-trained and foreign-born labor, Woolhandler said.

In particular, the administration has taken measures to reduce unauthorized immigration at the U.S.-Mexico border, despite the fact that the number of unauthorized immigrants in the United States hit its lowest level in over a decade in 2016. Trump has repeatedly referred to undocumented immigrants as criminals and labeled caravans of Central American migrants as “an invasion” on the country. More recently, Trump proposed an immigration agenda reducing the overall number of migrants and focusing only on high-skilled workers — a shift Zallman expects to be problematic for the health care workforce, given its reliance on low-wage, low-skilled labor.

“There is an intent to discourage low-wage earners and poor immigrants from coming to this country,” Zallman said, “We need that population here. We need not only highly skilled, but low-skill labor coming in.”

According to Zallman, there are two related but distinct concerns. The first is a general chilling effect that is the result of immigrants being discussed and treated like people who are unwanted, and the second is the specific, structural policies explicitly intended to limit immigration.

She noted the proposed change to the public charge rule as one such example at the intersection of the two. The Department of Homeland Security is weighing a change that would penalize legal immigrants for using public programs to which they are entitled, such as Medicaid and food stamps, by considering their utilization of the programs as a negative factor during their application for a green card or citizenship.

Though the policy has not yet been enacted, the Urban Institute found 1 in 7 adults in immigrant families declined to enroll in public assistance in 2018.

The study adds to a growing body of research on the imperative role of immigrants in the U.S. system.

Zallman’s previous work found the Medicare trust fund is sustained by healthy levels of immigration. While the average American-born person takes more money from Medicare than he or she paid in via payroll taxes, immigrants — who tend to be younger and healthier with high levels of labor force participation — pay more in than they take out. The same is true of private insurance, according to Zallman’s research.

Doug Badger, a senior fellow at the Galen Institute and former adviser to President George W. Bush, said these findings are purely speculative. Instead of focusing on immigration, he argued, the conversation around the predicted labor shortage should be about increasing wages.

The authors highlighted the need for a “multifaceted approach” — including better wages, enhanced benefits and education and training programs. But, they maintained, policies that curtail immigration “will almost certainly move us in the wrong direction,” neglecting migrants’ contributions to upholding the U.S. health care system, and endangering the future of care for the nation’s elderly and disabled.

“Trump has created a political climate in which people with brown skin often feel intimidated and unwelcome,” Woolhandler said. “He has a specific goal of diverging immigration, and that’s going to affect the health care workforce in a very negative way and the availability of care to people who need it in a very negative way.”

HHS did not respond to a request for comment.