15% say these matters are at the top of their mind when considering their vote, up 8 points since early May

A woman speaks during a protest against Georgia's abortion ban at the state capitol building in Atlanta. (Elijah Nouvelage/Getty Images)
By Cameron Easley

The state-level push by conservatives to enact stricter laws regulating abortion has garnered considerable attention over the past several weeks, and it’s pushing the issue to the front of Democratic voters’ minds.

A new Morning Consult/Politico poll conducted May 31-June 2 found 15 percent of registered Democrats said matters that affect women, which include birth control, abortion and equal pay, were the top set of issues on their mind when casting votes for federal office. That’s up 8 percentage points since a May 3-6 survey conducted just before governors in Georgia and Alabama signed into law two of the country’s most stringent abortion laws. On May 7, Georgia barred abortion after a fetal cardiac activity is detected, and on May 15, Alabama banned abortion in all cases except when the mother’s health is in danger.

Before then, eight states had already enacted legislation in 2019 imposing strict limits on abortion, but Morning Consult tracking indicates those moves did not deeply resonate with the public. Alabama and Georgia appear to have changed that. 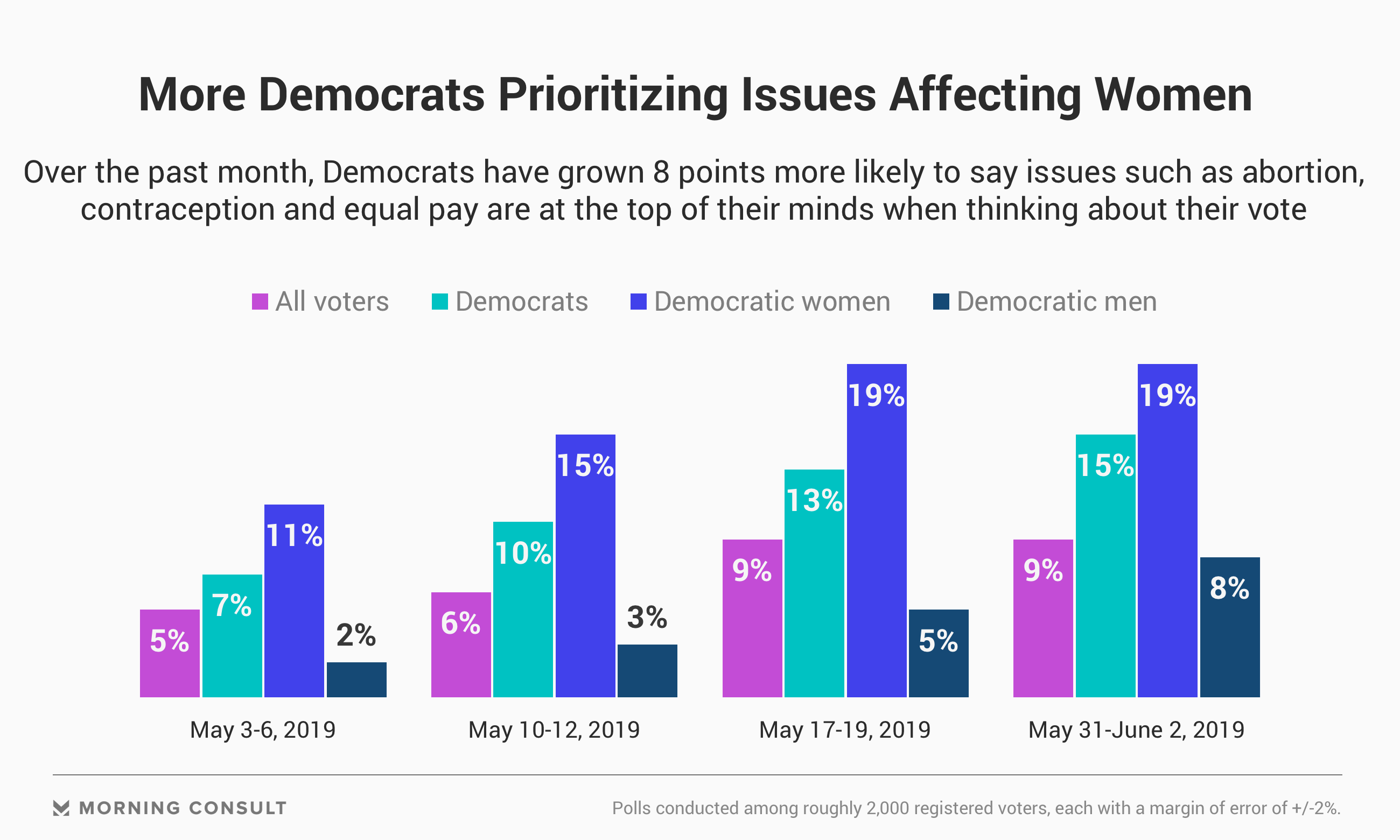 Coverage of those two laws’ enactment was widely digested: Fifty-one percent of all registered voters said they’d seen, read or heard “a lot” about their enactment in a mid-May poll, including 58 percent of Democrats, placing it in the top 10 widest-reaching news events of the year so far.

Since then, other states — Missouri and Louisiana, which has a Democratic governor — have followed suit on legislation similar to Georgia’s so-called “heartbeat bill.”

Since early May, a significant shift in prioritization of women’s issues, which the poll defined to include abortion, contraception and equal pay, can be seen among Democrats, especially among women in the party.

In the latest poll, conducted among 1,997 registered voters with a 2-point margin of error, 19 percent of Democratic women said these matters were at the top of their mind when considering their vote, another 8-point increase since early May.

That places those issues alongside health care (22 percent), seniors’ issues such as Medicare and Social Security (20 percent) and the economy (17 percent), and far ahead of security issues (9 percent), which include terrorism, foreign policy and border security, in importance at the ballot box.

The share of Democratic men who rank women’s issues above all others has risen 6 points since early May. But at 8 percent, abortion, birth control and equal pay still rank near the bottom of their voting priorities.

Democrats aren’t the only voters who are putting a bigger premium lately on abortion rights and other issues affecting women. Independent women also registered an 8-point jump, to 14 percent from 6 percent, putting them in the ballpark with nearly all the other priorities listed above, save for the economy at 28 percent.

And for the country’s youngest voters, consistently the least likely to show up at the polls, women’s issues have taken on even greater potency. One-fifth of voters ages 18 to 29 put that at the top of their list, a share only exceeded by the economy (31 percent).

As Democratic candidates vie for the party’s nod to take on President Donald Trump, abortion rights are set to claim an even more prominent role in the debate. For candidates looking to cater to voters who care most about women’s health issues and other causes championed by women, the data suggests that bloc has a significantly less nuanced view on abortion rights than the broader electorate.

Forty-two percent of these voters said in the May 17-19 poll that abortion should be “legal in all circumstances” — the highest level of support among all demographic groups and roughly twice the share of all voters who agreed.