Is ‘The Handmaid’s Tale’ Rooted in Reality? It Depends on Your Party Affiliation

26% of Democratic women said the show’s dystopia is ‘grounded in truth’; 9% of GOP women felt the same

A woman dressed as a character from Hulu's "The Handmaid's Tale" for a May 19 rally in Montgomery, Ala., to protest the state's move to virtually ban abortion. (Julie Bennett/Getty Images)
By Sarah Shevenock

As Hulu prepares to debut the third season of its dystopian drama, “The Handmaid’s Tale,” on Wednesday, off-screen politics is causing some to draw parallels between states’ passage of legislation to restrict access to abortion and the actions taken by the series’ totalitarian regime, Gilead.

On Sunday, Brian Stelter of CNN’s “Reliable Sources” asked actress Ann Dowd, who plays Aunt Lydia in the series, and executive producer Warren Littlefield to comment on how close or far apart the United States is to a Gilead-like state. “We’re a heck of a lot closer than we were in season one, which is terrible,” Dowd said. “When I saw what was going on in Georgia, I thought, ‘This can’t be real.’ It stunned me.”

Whether or not others agree with Dowd depends heavily on what party they belong to, according to a May 31-June 2 Morning Consult/The Hollywood Reporter survey.

It found that people were generally split on whether “The Handmaid’s Tale” could reflect America’s future: 17 percent agreed with the statement that the show’s dystopia was “grounded in truth and could become a reality someday,” while 16 percent said the show “capitalizes on people’s irrational fears and won’t become a reality.” Sixty-seven percent said they didn’t know or had no opinion. 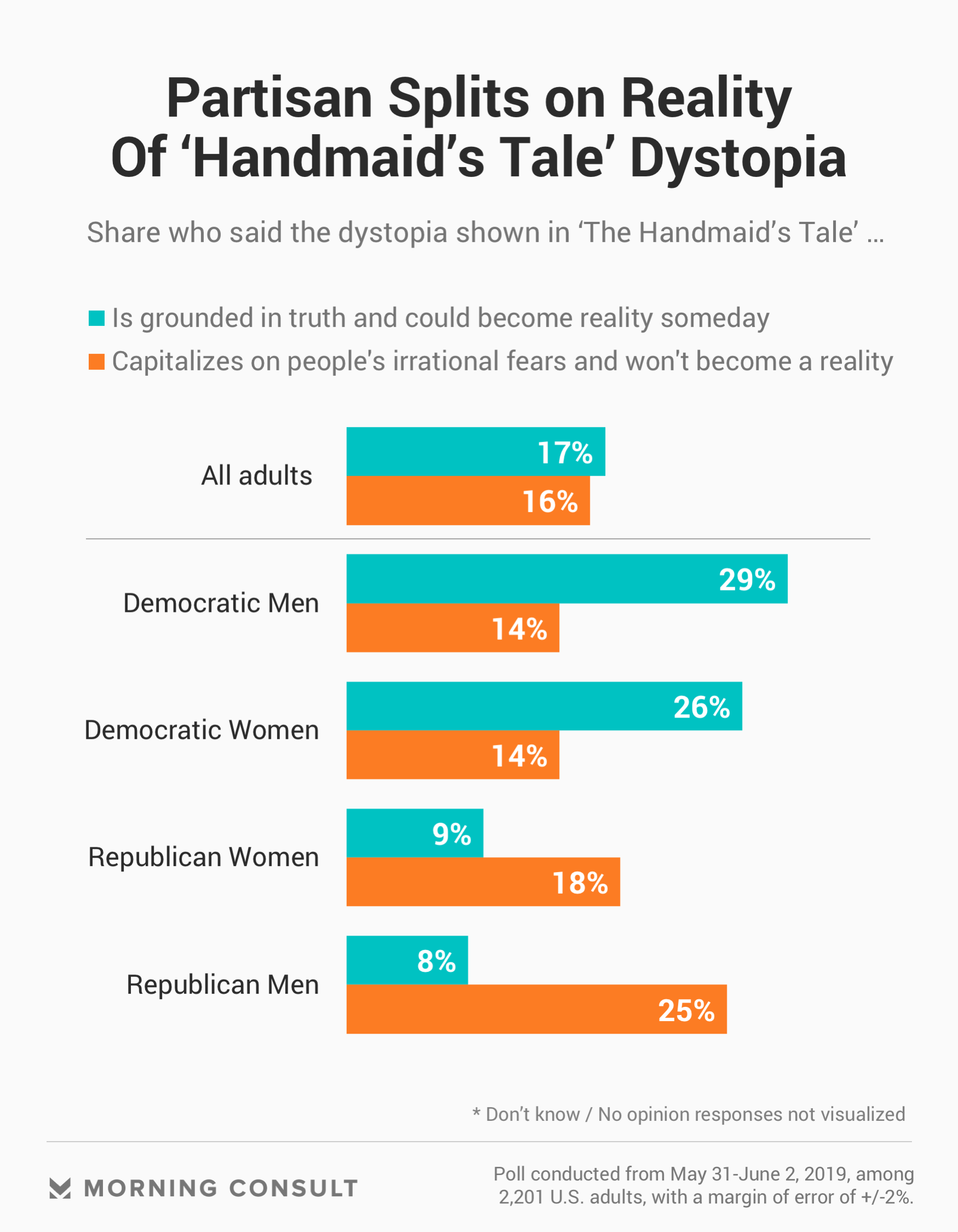 Among the 2,201 adults surveyed, there was equal interest in watching utopian and dystopian programs, with 30 percent saying they would rather watch a film or TV show with a dystopian society where characters are “living in a society of great suffering or injustice,” and 28 percent saying they would prefer to watch a utopian movie or TV show, where characters are “living in a near-perfect society,” similar to the “Star Trek” films and television shows.

Dystopian content has drawn a growing audience thanks in part to film adaptations of popular young adult titles such as “The Hunger Games” and “Divergent” and television dramas such as “The Handmaid’s Tale” and “Black Mirror.” “The Hunger Games: Catching Fire” was the highest-grossing film of 2013 domestically, bringing in over $424 million, and all four “Hunger Games” films were among the top 10 highest-grossing films domestically in their respective release years.

In May 2017, Hulu said the series premiere of “The Handmaid’s Tale” drew more viewers than any other series premiere on the service, and it doubled its audience during the premiere episode of its second season, according to The Hollywood Reporter.

When all adults were asked about their favorite film and television genres, just 41 and 37 percent of adults had a favorable opinion of utopian and dystopian genres, respectively. The highest-ranking genres were comedy (87 percent) and action/adventure (86 percent).