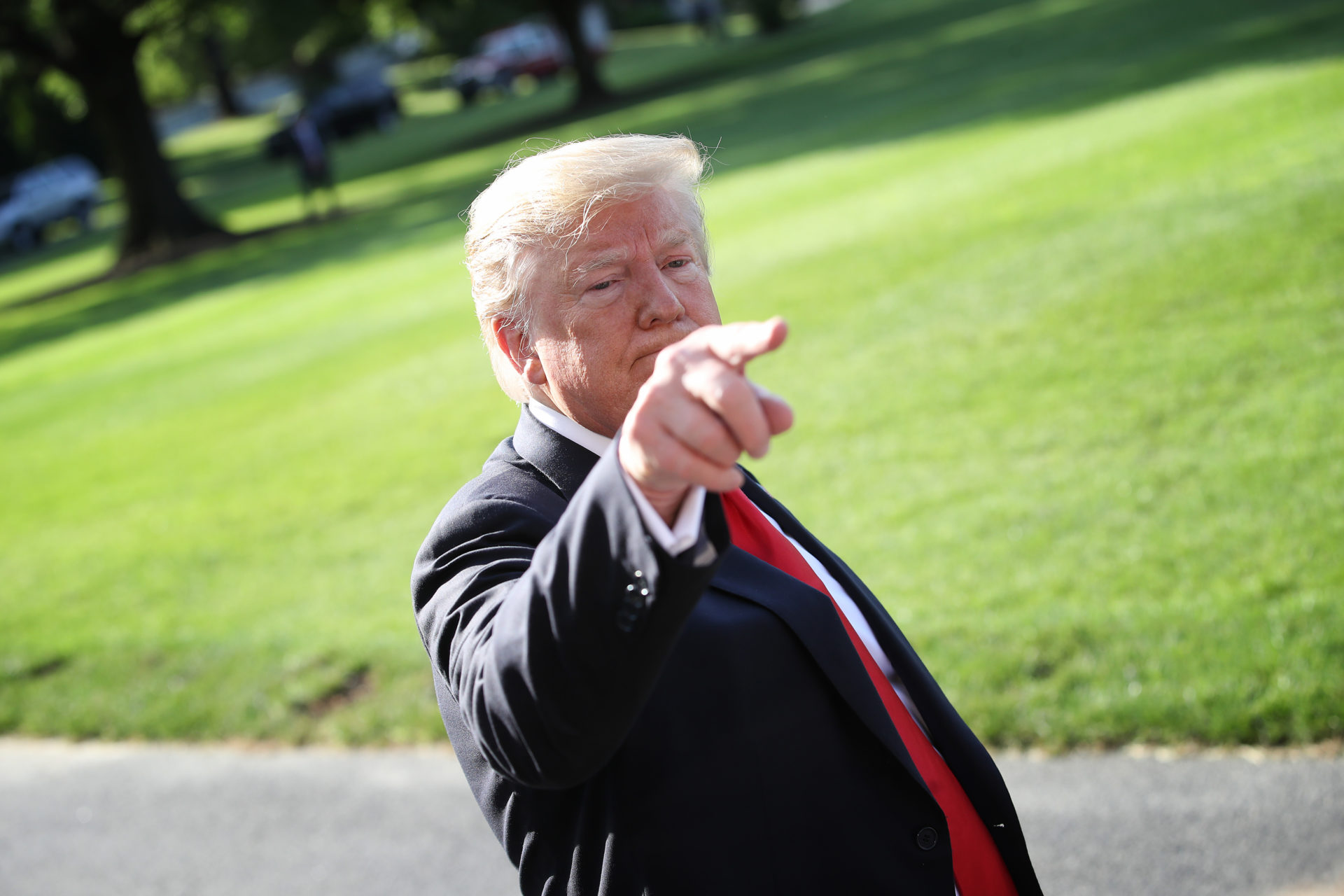 President Donald Trump answers questions on the comments of special counsel Robert Mueller while departing the White House on May 30. (Win McNamee/Getty Images)
By Eli Yokley

For over two years, Washington has been consumed by special counsel Robert Mueller’s investigation into Russian interference in the 2016 election, but looking ahead to 2020, the lion’s share of voters are shrugging at his findings.

A new Morning Consult/Politico poll, conducted May 31-June 2 among 1,997 registered voters after Mueller spoke publicly for the first time to describe the conclusions of his investigation, found 49 percent said the Mueller probe will not impact their decision about whether or not to vote for President Donald Trump next year.

The president has been a polarizing figure since early in the 2016 campaign, defeating Democratic nominee Hillary Clinton in a contest between two of the most deeply popular major-party candidates in history. Since taking office in 2017, views on the president’s job performance remain extremely stable, with the vast majority of his supporters and detractors entrenched in opposing camps.

Democrats had hoped Mueller’s findings would dent that trend.

While Mueller’s team did not find enough evidence to bring a conspiracy charge against members of the Trump campaign, it identified 10 instances in which the president may have committed obstruction of justice and found Russia had meddled in the last presidential election. And while roughly half of voters said Mueller’s conclusions made no difference to their plans for 2020, it was still more of a negative than a positive for Trump. 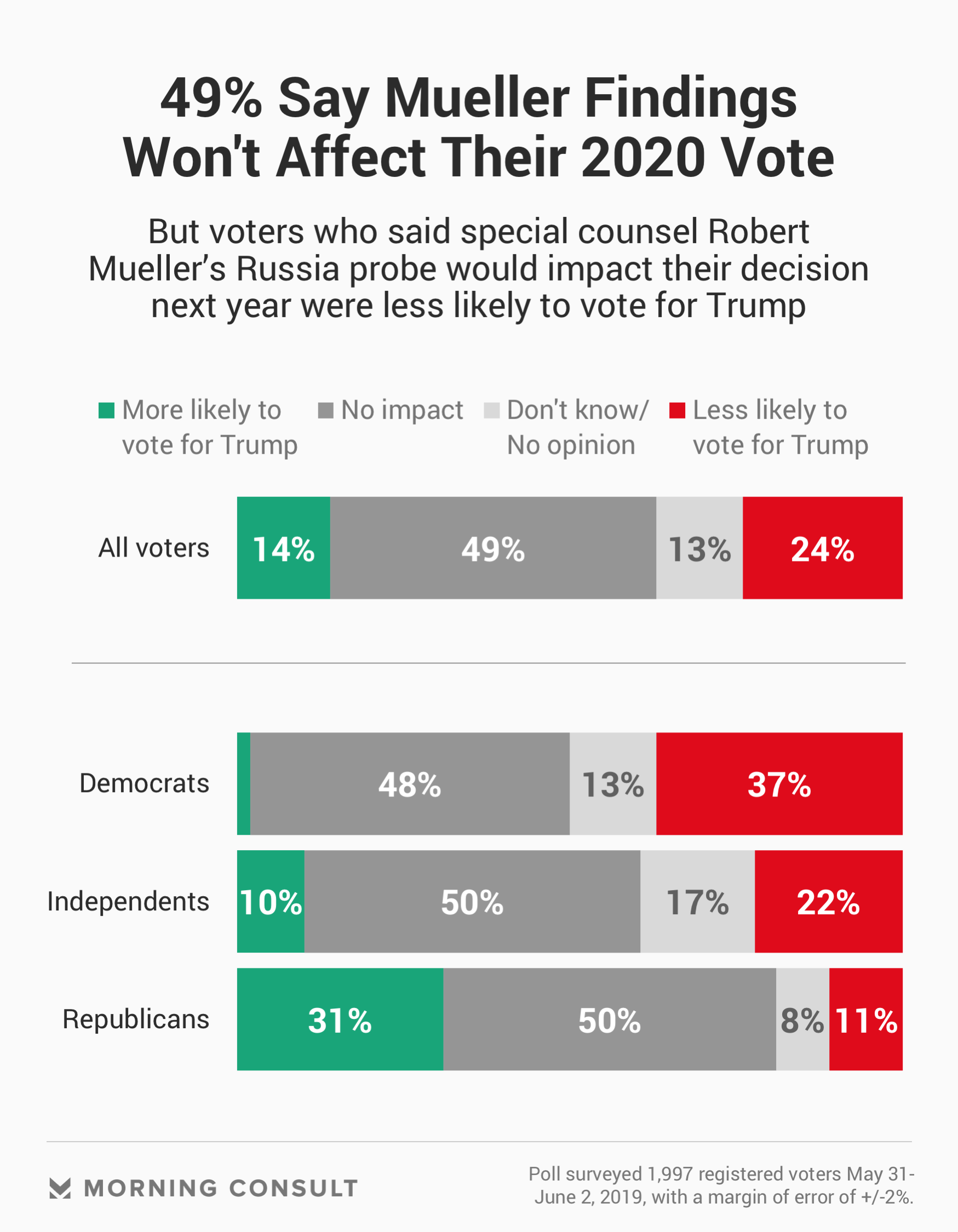 A quarter of voters (24 percent) said they were less likely to back the president next year after hearing about Mueller’s findings, compared with 14 percent who said they were more likely to vote for Trump. And while half of independents said the report made no difference, 22 percent said it made them less likely to vote for the president — roughly double the share who said it made them more likely.

Mueller’s public comments announcing the end of his investigation last week — his first to cameras since the probe began — sparked renewed attention to his findings, putting them in his own words for Americans to see on their television screens.

But while they received wall-to-wall coverage on cable news and were the talk of Twitter, news of his public appearance hardly broke through with voters.

Just over a third of voters (35 percent) said they heard “a lot” about Mueller’s public appearance last week, putting it on par with some other events in his investigation, such as the sentencing of former Trump campaign Chairman Paul Manafort and Trump asserting executive privilege over the full report. The news broke through far less than events such as Trump’s declaration of a national emergency at the U.S.-Mexico border and the government shutdown, which reached a healthy majority of voters at the time.

Mueller’s public remarks appear to have made little impact on the president’s approval: 43 percent approved of his job performance and 54 percent disapproved this week, compared with 42 percent approving and 56 percent disapproving from the survey two weeks prior. Both of those figures are within the polls’ margins of error of 2 percentage points.

With Mueller’s work finished, House Democrats have taken up the mantle of probing the president further, with the House Judiciary Committee set to hold a June 10 hearing to dig into the report’s findings. And while views on Trump’s job performance were little changed, House Speaker Nancy Pelosi (D-Calif.) and her leadership team are facing more pressure from the base to impeach the president.

Sixty-nine percent of Democrats in the new poll said Congress should begin impeachment proceedings to remove Trump from office, up 10 points from a late April survey. But at this point, impeachment still appears to be a political loser for Democrats: A 48 percent plurality of all voters said they oppose impeachment, 10 points higher than the 38 percent who support it.