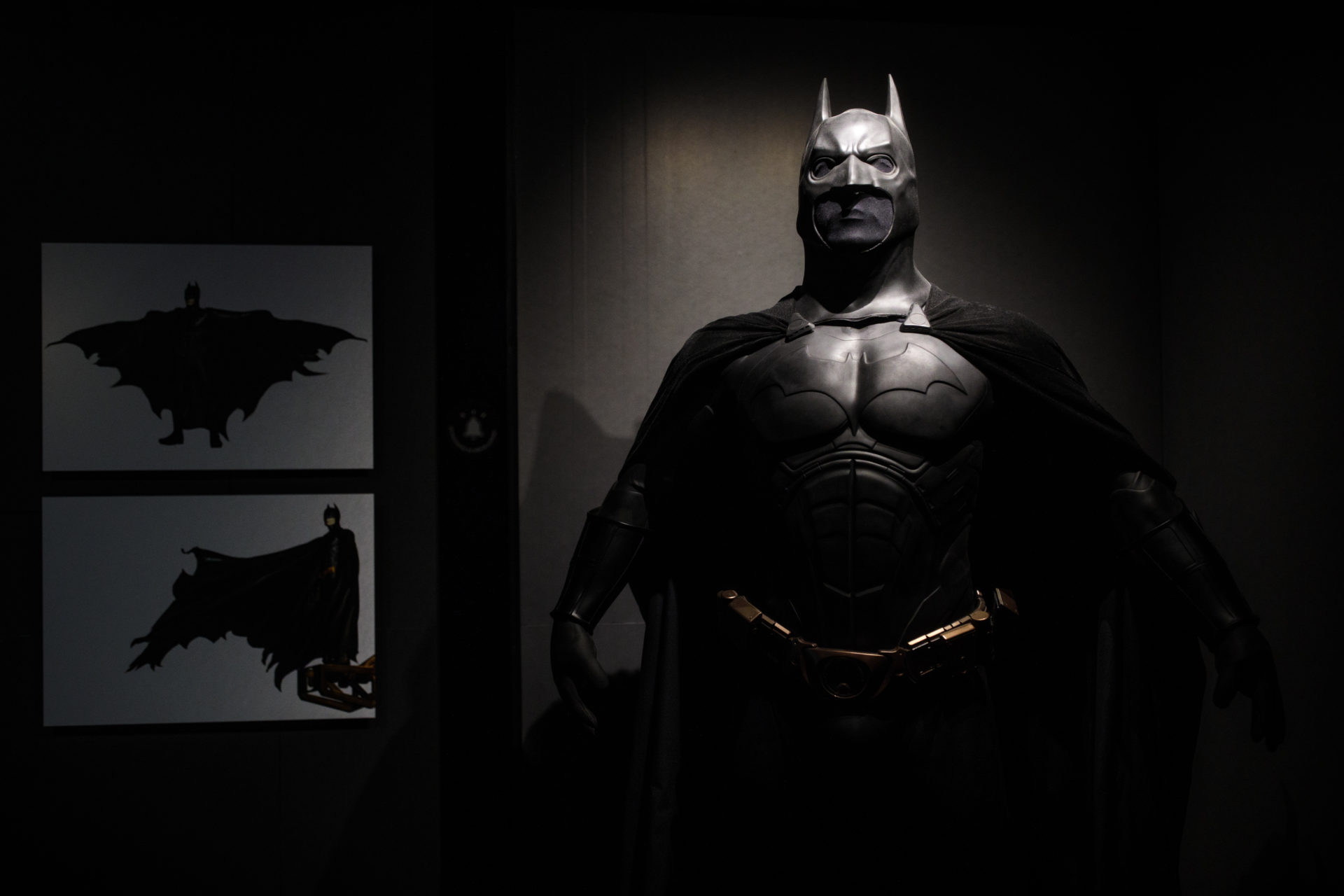 A Batman costume from the 2005 Batman Begins film worn by Christian Bale and designed by Lindy Hemming is on display at the DC Comics Exhibition: Dawn Of Super Heroes at the O2 Arena on Feb. 22, 2018 in London. Bale ranks as the most favorable Batman in a recent Morning Consult/THR survey. (Photo by Jack Taylor/Getty Images)
By Sarah Shevenock

As Warner Bros. continues to expand its DC Comics extended universe, Robert Pattinson is the next actor to assume the iconic role of Batman, preparing to don the mask in director Matt Reeves’ upcoming film “The Batman.” But a new Morning Consult/The Hollywood Reporter poll finds that the public was evenly split on whether Pattinson — or fellow actor Nicholas Hoult — would be a better “Caped Crusader.”

Earlier this month, The Hollywood Reporter reported that the decision as to who would be the new Batman came down to two actors: former “Twilight” star Pattinson, and Hoult, famous for playing Beast in the “X-Men” series, with Pattinson eventually winning the role.

The June 6-9 poll of 2,201 U.S. adults found that the public was evenly split in terms of whom they thought should take on the part. Thirty percent said Pattinson was the better fit for the part, with an equal share saying the same about Hoult. Forty percent said they didn’t know or had no opinion.

When asked how they thought Pattinson would do as Batman, 11 percent of those surveyed said they expected his portrayal to be excellent, and 27 percent said it would be good.

Respondents were also asked how they thought Joaquin Phoenix would do in the role of Batman’s arch-nemesis the Joker, which he will take on in director Todd Phillips’ “Joker,” slated for release this fall. Thirty-seven percent of people said they expected his turn as the character to be excellent, and another 31 percent said they thought he would do a good job. 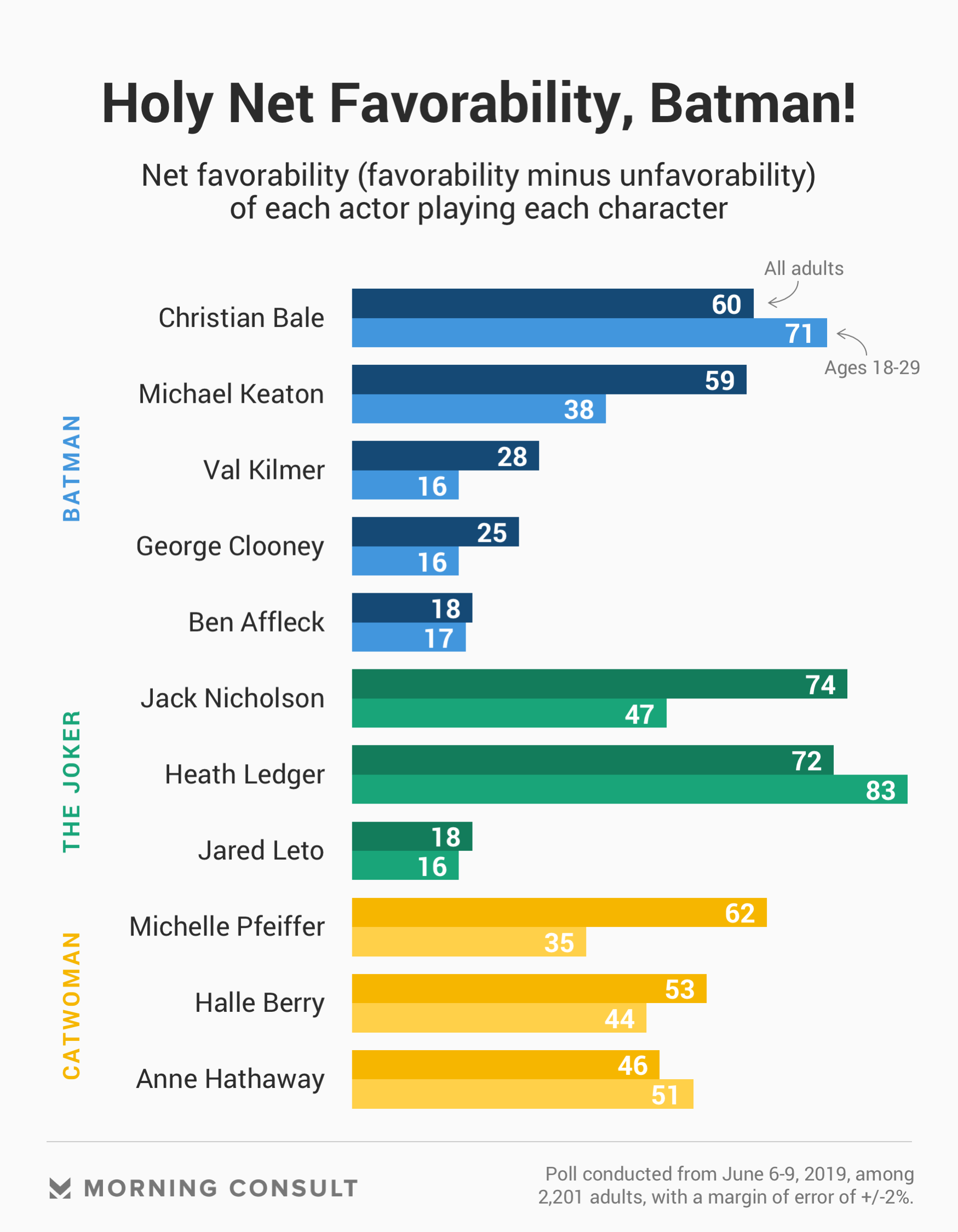 While no additional details about plot or casting for “The Batman” have been released, there is a chance the film will feature appearances from some of Gotham’s more memorable characters. When asked about favorability of different live-action portrayals of Batman, Catwoman and the Joker in the past 30 years, Jack Nicholson’s and Heath Ledger’s versions of the Joker had the highest net favorability — the difference between favorability and unfavorability — among all adults. Nicholson’s performance had a net favorability of 74 percentage points, while Ledger’s had 72 points.

Among the different Caped Crusaders, Christian Bale of the “Dark Knight” trilogy and Michael Keaton of “Batman” and “Batman Returns” were the most favored Batman actors with a net favorability of 60 points and 59 points, respectively. Ben Affleck’s portrayal of Batman in 2016’s “Batman v Superman: Dawn of Justice” and 2017’s “Justice League” had the lowest net favorability at 18 points.

Age proved to be a factor in determining audience’s favorite versions of the characters, with younger audiences having a greater affinity for director Christopher Nolan’s reminaging of the characters in his “Dark Knight” trilogy. For example, Ledger’s Oscar-winning rendition of the Joker in “The Dark Knight” had a net favorability of 83 points among adults ages 18-29, 11 points greater than among all adults, and Anne Hathaway’s Catwoman in “The Dark Knight Rises” had a net favorability of 51 points among the age group, 5 points higher than all adults.

Bale’s Batman had a net favorability of 71 points among young adults, 11 points higher than his net among all adults. Ledger and Hathaway outranked public favorites Nicholson and Catwoman actress Michelle Pfeiffer among the younger demographic.