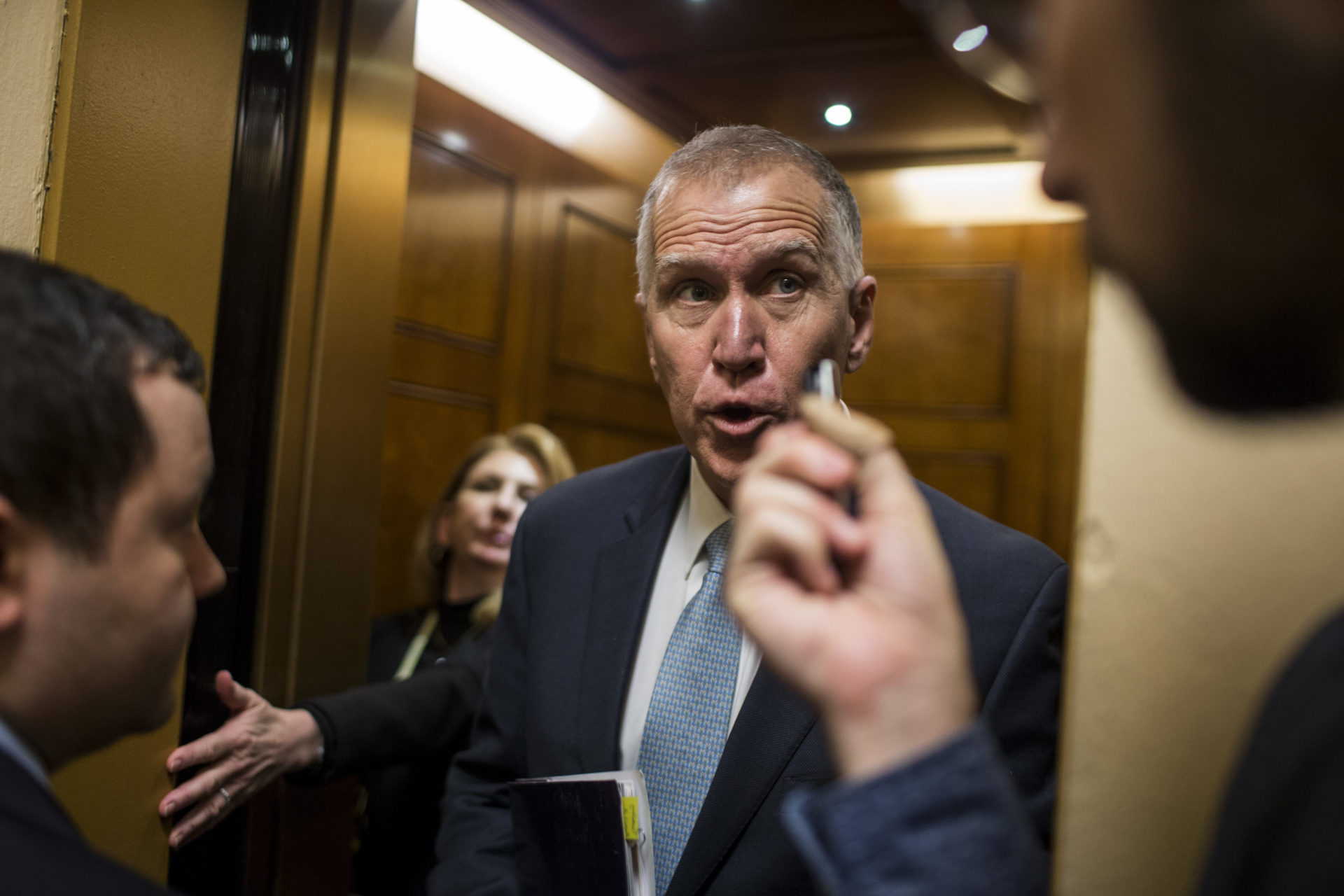 Sen. Thom Tillis of North Carolina, one of the most vulnerable Senate Republicans up for re-election next year, speaks to reporters in the Senate basement before an April 2 weekly policy luncheon. (Zach Gibson/Getty Images)
By Eli Yokley

After two months of exploring a run for Senate in North Carolina, former state Sen. Eric Mansfield is making it official.

On Tuesday, he launched his campaign for the Democratic nod to take on Republican Sen. Thom Tillis with a two and a half minute video, lamenting a “sickness in our politics” and declaring that “it’s time to restore the health of our democracy.”

In an interview with Morning Consult, the Fayetteville physician detailed a few of his policy beliefs.

He said he favors an “evolution” toward “Medicare for All,” beginning with expanding Medicaid in every state, over an immediate “revolution” toward a single-payer health care system. He opposes efforts pushed by some liberal activists to add seats to the Supreme Court and end the legislative filibuster if the party retakes the Senate majority, saying Democrats should win elections “rather than change the rules just so we can gain some type of benefit.”

Nor does he believe impeachment is the “best way” to remove President Donald Trump from the White House. Instead, he said, Democrats should focus on defeating the incumbent in 2020 by talking about what they’re for rather than what they’re against. (Trump’s net approval rating in North Carolina was 4 points underwater in May, according to Morning Consult data.)

Related: Erica Smith Says She Can Beat Thom Tillis, but Democrats Aren’t So Sure

His entrance into the race came a day after former state Sen. Cal Cunningham dropped his own bid for lieutenant governor of North Carolina and switched to the Senate race, touting the endorsement of former Sen. Kay Hagan (D), who lost to Tillis in 2014. Both moves came after former U.S. Transportation Secretary Anthony Foxx, the former mayor of Charlotte, N.C., said Sunday on Twitter he would not run for the Democratic nomination.

Democratic strategists in North Carolina and Washington had expressed unease in early June with the ability of the two announced candidates at the time — state Sen. Erica Smith and Mecklenburg County Commissioner Trevor Fuller — to run formidable campaigns in what’s expected to be a tough slog against Tillis next year.

Mansfield and Cunningham have run statewide campaigns before, though neither got past their respective primaries. Mansfield unsuccessfully sought the Democratic nomination for lieutenant governor in 2012 and Cunningham came up short for the party’s nod for Senate in 2010.

The Democratic Senatorial Campaign Committee and other national Democratic groups have not yet endorsed a candidate in the race. Smith has met with the committee this month, and Mansfield said he’s already done so, though he said he did not ask for the committee’s endorsement.

“We wanted to show them that we had good support — grassroots support — and that we could be an excellent nominee,” he said.

The entry by Mansfield and Cunningham heats up the race among Democrats vying for the right to take on Tillis, who will be preoccupied by his own primary challenge from retired businessman Garland Tucker.

Tillis has among the lowest base support of any of the Senate Republicans up for re-election next year, according to Morning Consult’s Senator Approval Rankings, with just over half of the GOP voters in his state approving of his job performance during the first quarter of 2019. He drew the ire of the president’s friends and foes alike during those months after announcing his intention to vote against Trump’s national emergency declaration at the U.S.-Mexico border before changing his mind to support the decision.

Mansfield said “no” when asked if there was an emergency at the country’s southern border.

The Tillis campaign did not respond to a request for comment.

This story has been updated with comments from Eric Mansfield and Erica Smith’s meeting with the Democratic Senatorial Campaign Committee.