Trump Predicts Stock Market Crash in 2020 if He Loses, but History Says Otherwise

Markets have swung 1 or 2 points in response to most presidential candidates' victories, analysis finds

President Donald Trump paints a bleak picture of the economy and stock market if he loses the presidential election in 2020. History suggests a far more subdued outcome.

Trump has repeatedly boasted of a strong economy and market throughout his presidency, and it will likely be a major theme of his re-election campaign: “Our economy is the envy of the world, perhaps the greatest economy we’ve had in the history of our country, and as long as you keep this team in place we have a tremendous way to go,” he said on Tuesday in Orlando as he officially kicked off his 2020 re-election bid.

And over the weekend, Trump tweeted that “a Market Crash the likes of which has not been seen before” will come if anyone other than him wins the presidency in 2020.

Markets usually only move a point or two in response to a presidential election, according to a Morning Consult analysis of the S&P 500, beginning with President Herbert Hoover’s 1928 victory.

“Historically, the stock market reaction has been quite small,” said Erik Snowberg, a professor of economics and political studies at the California Institute of Technology who has written about U.S. stock markets and presidential elections. 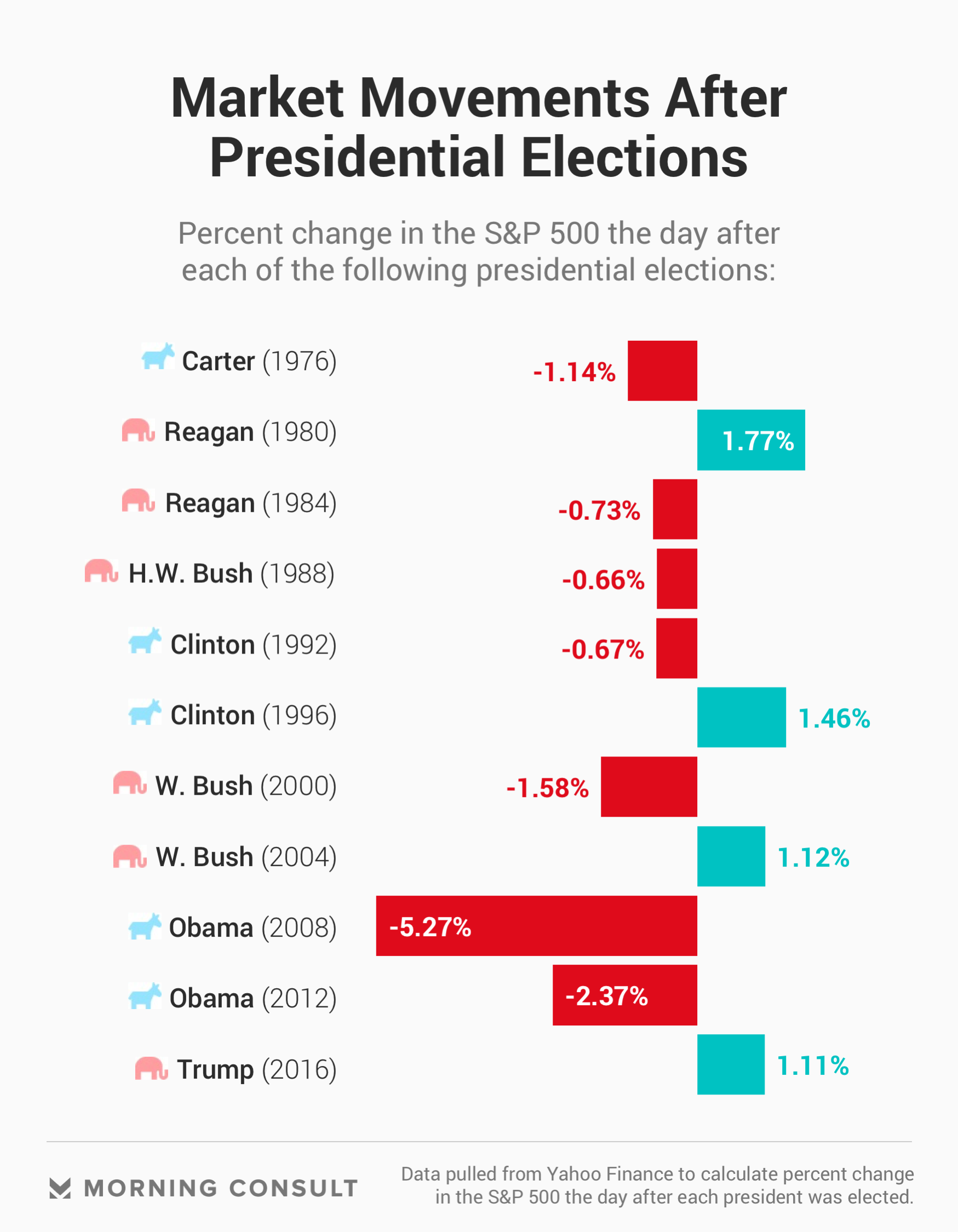 As a broad rule, large stock movements are most likely when the outcome of a presidential election is unexpected. Those movements are more likely to be positive when a Republican wins.

Republican candidates have promoted policies friendly to the country’s largest companies going back to the 1880s, which has helped the party’s favorability on the stock market, said Eric Zitzewitz, a professor of economics at Dartmouth College who has also written about the topic.

“But the biggest movement is when the election results are a surprise and when the two parties are different on economic policy,” he said.

President Barack Obama’s 2008 election, near the beginning of the Great Recession, saw the most market movement, according to the analysis of S&P 500 returns. The S&P 500 fell 5.27 percent the day after Obama’s election.

That probably had more to do with the faltering economy and an already skittish market than a reflection of the market’s confidence in Obama, several economists said. After Obama, the next-largest drop in the S&P 500 (4.42 percent) came after the first election of President Franklin D. Roosevelt in 1932, three years into the Great Depression.

The stock market actually tends to favor Democrats throughout their entire presidency, Zitzewitz said. This is mostly due to Obama and Roosevelt, however, who experienced a major market crash before their terms began and benefited from the market’s rebound.

During the period between Election Day and a president’s inauguration, the stock market leads toward Republicans, according to a 2014 Princeton economics paper. The S&P 500 has ticked up 0.15 percent on average between Democrat-to-Republican transitions, but declined an average of 1.38 percent during Republican-to-Democrat transitions.

However, just because markets have reacted a certain way before doesn’t mean that’s how they will react in 2020, several economists said.

Related: Trump as ‘Tariff Man’ Is Still a Hit With Republicans

The markets could have an outsized reaction if the Democratic nominee is a financial hawk such as Sens. Elizabeth Warren (D-Mass.) or Bernie Sanders (I-Vt.).

“Imagine what would happen to Facebook or Wells Fargo stock under an Elizabeth Warren presidency,” said Raymond Fisman, an economist at Boston University who has also studied the impact of presidential election outcomes on the stock market. “It’s possible to say that if Elizabeth Warren pulls off a surprise victory over Trump, I would expect that to really move the market.”

The markets, however, would probably view the victory of current Democratic frontrunner and former Vice President Joe Biden as business as usual, Fisman said.

Trump’s trade policy for the remainder of his term could be another factor in how the markets react after the 2020 presidential results are in. While the 2017 tax changes Trump championed were hailed by U.S. companies, those are mostly done, and Wall Street has been less welcoming of trade tensions stoked by Trump between the United States and China.

“Trump is this weird bundle of policies that are good for the stock market, like taxes, but also the trade policies are quite negative for the stock market,” Zitzewitz said. “Since the tax cuts are probably complete, most of what you’re learning now in the market’s view on Trump is about trade.”