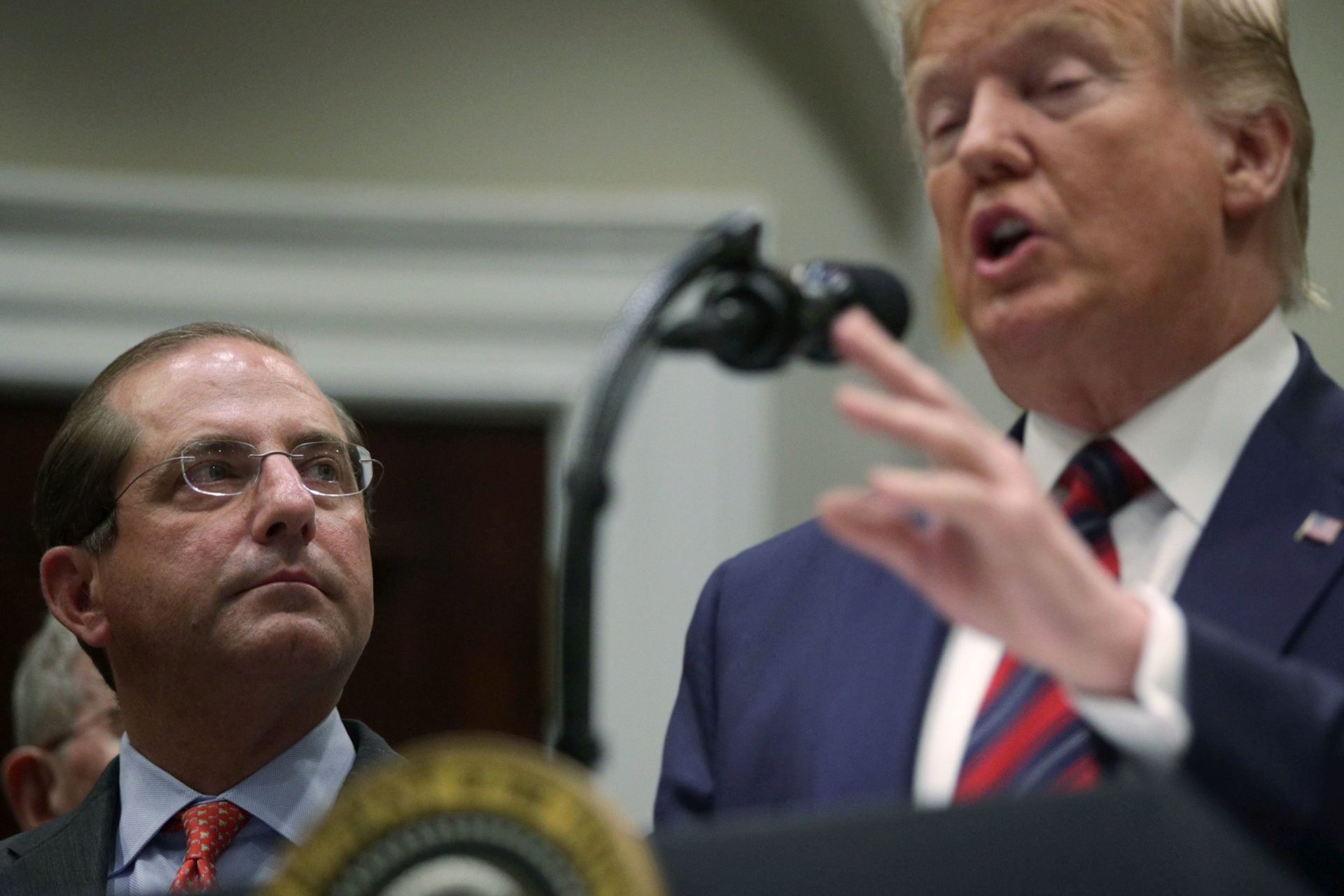 Secretary of Health and Human Services Alex Azar listens to President Donald Trump during a Roosevelt Room event at the White House on May 9, 2019. (Alex Wong/Getty Images)
By Yusra Murad

President Donald Trump signed an executive order Monday calling for federal regulations to broaden price transparency in the health care industry, a move that Health and Human Services Secretary Alex Azar declared “will go down as one of the most significant steps in the long history of American health care reform.”

Per the order, HHS must issue new rules requiring hospitals to disclose prices negotiated with health plans and mandating providers and insurers to inform patients of their out-of-pocket costs before receiving care.

Though health policy experts uniformly support the spirit of price transparency, on this order, many expect the devil will be in the details, as the agency now embarks on a rulemaking process during which it will take comments from stakeholders.

Morning Consult asked health experts and analysts for their opinions on the executive order. Here are their thoughts:

“It strikes me as, fundamentally, somewhat inefficient to require 4,000 individual hospitals to disclose their rates with dozens of payers, when you could instead require a much smaller number of payers to disclose their rates with hospitals — or perhaps even outsource all of this transparency-type work to a non-governmental agency, who would collect the data and make it transparent,” Brennan said. “I worry that asking hospitals to disclose this information, which is really a part of their current operations, is just going to add even more administrative burden to a health care system that’s already pretty administratively burdened.”

Brennan, a former chief data officer at the Centers for Medicare and Medicaid Services, said that rulemaking takes a long time, and he would be “surprised if we saw anything final on this topic earlier than next summer, and even that would be hugely ambitious.”

The rules are likely to shift prices, Brennan said, but the direction of the movement remains in question: There may be some downward pressure on those who charge the most, but there may be some upward pressure as other providers realize they’ve been getting lower rates than they could.

From Desser’s perspective, this is “step two” of a process by which “the administration is trying to figure out what authorities they have, from a regulatory standpoint, to move into health and the health care market, and the direction they would like to see it go.”

“You can’t really have consumerism in health care if people don’t know what things cost — if they can’t for themselves evaluate value, if they don’t have data to make price and quality comparison. That’s what it feels like the administration is trying to do in this executive order: put forward a series of actions that tries to inject more consumerism into the health care markets.”

“Hospital and insurer groups are almost certain to challenge HHS’ authority to invoke the rulemaking process. They will argue that Congress didn’t leave discretion to the executive branch beyond the ACA requirements about chargemaster disclosures,” Epstein said. Price transparency is just one important piece of “a complicated puzzle on bringing down prices.”

“Meaningful disclosure of prices, where patients are told what they are actually going to have to pay out-of-pocket, is likely to be more helpful than general disclosures of negotiated rates. But lawmakers do need to consider safeguards so that people don’t feel forced to turn down necessary care that they can’t afford. Administrative burden and the technical cost for building a system that can give an advanced explanation of benefits should be considered in all of this, but it shouldn’t be used as a reason to shut down these efforts.”

“I’m concerned you’ll have patients who will see the administration wants disclosure of prices, and that the knee jerk reaction will be … it’s going to make prices go down,” Epstein said. “This is a very complicated problem, and the notice and rulemaking process is going to be very important because you can do this right, and you can do this wrong. And we might have to experiment a little bit to see what the consequences are of any particular approach.”

“In general, transparency is helpful; it’s still kind of a black box, what’s being charged, both the discounted and undiscounted rates,” Pollitz said. “But what are patients supposed to do with all of this? This isn’t like shopping for groceries. You don’t know all the things that will happen to you when you’re in the hospital — it’s not like shopping around is really an option for people. Patients are not really the same thing as consumers: They’re sick; they don’t have medical knowledge; they don’t always know what kind of care they’re going to need — their doctors don’t even know what kind of care they’re going to need. So this notion of kind of shopping around, it’s really not applicable for patients, certainly in many circumstances.”

Pollitz also noted that, to the extent that this is focused on disclosure of negotiated fees with health plans, “the administration has had that authority since the Affordable Care Act. The ACA gives the administration authority to compel disclosure by insurers of all kinds of practical nuts-and-bolts aspects of how coverage works. In that respect, the executive order may be redundant.”

“I don’t think it’s going to make a huge impact by itself on prices,” Pope said. “It may have some helpful second-order effects. Requiring hospitals to disclose negotiated prices — that’s going to be retrospective. By the time anyone combs through the data, it could be a couple of years. It’s not going to influence consumer behavior in any way.

“It could have political effects in making people aware of the distribution of prices in the hospital sector, which is a very politicized sector of the economy. If prices are well-known, hospitals are going to have to justify these in a way that they haven’t done politically.” And if hospitals are forced to disclose negotiated rates, Pope said, “the apex is likely to be greatest where it’s most unexpected. Where do we have prices that are the most inflated? It’s in the market that have fewer competitors: In rural markets, where there aren’t a huge amount of local competitors, the prices might be inflated.”