Sanders’ Electability Pitch Has a Problem 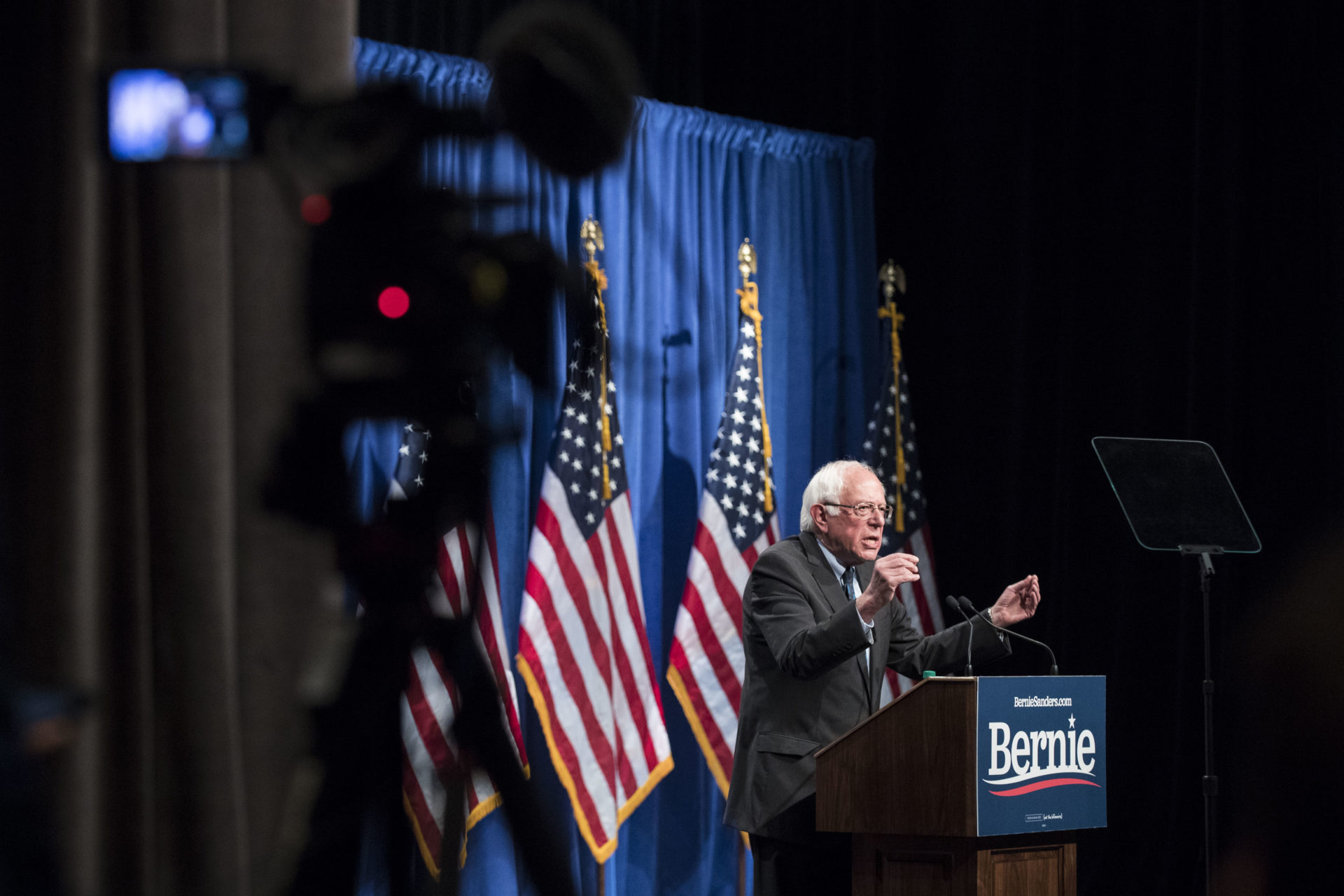 Democratic presidential candidate Sen. Bernie Sanders (I-VT) a campaign function in the Marvin Center at George Washington University on June 12, during which he affirmed his support for democratic socialism. (Sarah Silbiger/Getty Images)
By Cameron Easley

Sen. Bernie Sanders has maintained a firm grip on his runner-up status during the very early stages of the Democratic presidential primary, but there are signs that his potential victory — which faces challenges from both the front-runner and those behind him — could inhibit the Democratic Party’s efforts to limit President Donald Trump to one term in office.

While the Vermont independent’s campaign has been able to cite a number of national general-election polls showing him outperforming most of the Democratic candidates in head-to-head matchups against Trump, a new Morning Consult state-level analysis raises questions about his sturdiness. The comparison of the general electorate’s views of the top Democratic candidates and Trump undermines his “electability” pitch — the argument that he is the best candidate to take on Trump next year — amid increased concerns about the issue among the party’s voters following the president’s upset victory in 2016 over Hillary Clinton.

The data, based on thousands of surveys conducted April 25-June 10 among registered voters in a dozen states pivotal to winning the Electoral College, reveals two main problems for Sanders, experts said. 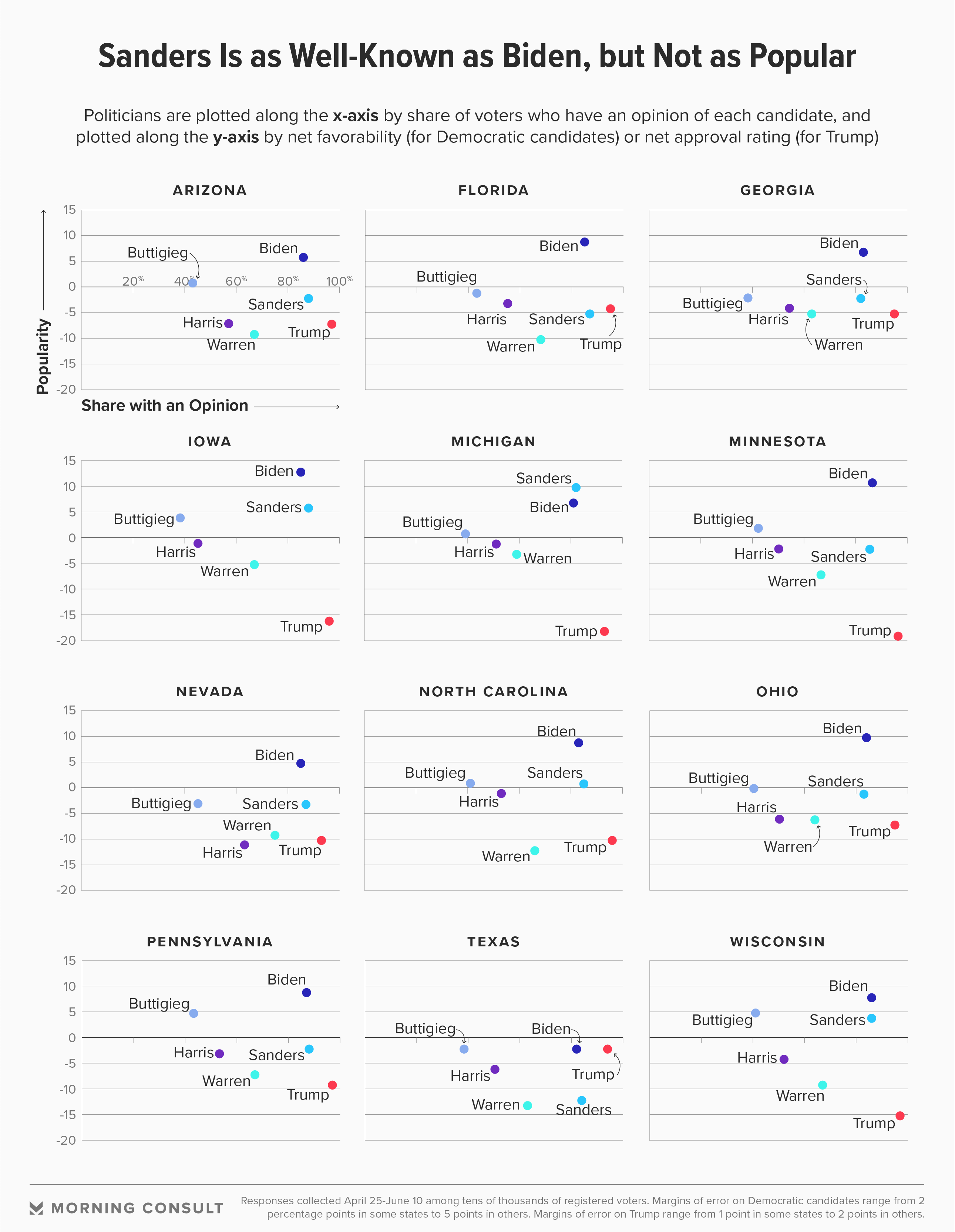 For one, he appears to be a weaker general-election candidate than the race’s current front-runner, former Vice President Joe Biden — even though the self-avowed democratic socialist has become roughly as well-known as former President Barack Obama’s No. 2 on the back of a better-than-expected performance in the party’s nominating contest three years ago.

And Sanders has nearly as much public visibility as the current commander in chief. But it’s his fame that raises questions about whether the lesser-known presidential aspirants currently trailing him in Morning Consult tracking — Sens. Elizabeth Warren of Massachusetts and Kamala Harris of California and South Bend Mayor Pete Buttigieg of Indiana — will match or exceed his appeal to the general electorate in the coming months.

As Sanders prepares to lock horns with Biden on Thursday night in Miami for the Democratic National Committee’s first debates of the cycle, the data shows the former vice president is significantly more popular than Sanders among registered voters in eight states, including key battlegrounds such as Arizona, Florida, North Carolina, Ohio and Pennsylvania.

“The big takeaway from this data is that Biden is clearly more electable than Sanders,” Rachel Bitecofer, assistant director of the Wason Center for Public Policy at Christopher Newport University, said in an interview last week, adding that it bolstered “the perception that this election is the Democrats’ to lose unless they nominate Sanders.”

Another complicating factor for Sanders is that he is already underwater or just breaking the surface in terms of net favorability (the share of voters who view each candidate favorably minus those who view them unfavorably) in each of the aforementioned states, as well as in Minnesota — which Democrats narrowly carried in 2016 — and Nevada, another state that Democrats cannot afford to lose next year.

Because of the country’s polarized climate, political scientists expect the winner of the Democratic primary to see his or her popularity decline. Biden has a cushion with the general electorate in most key states when compared to Trump, and the lesser-known candidates in the hunt for the nomination have the opportunity to grow their support over the coming months as more voters get to know them.

Compared with Biden, Sanders has less margin for error when it comes to Trump. And his high name recognition, combined with his long-cultivated brand as a left-wing ideologue, make it more difficult to change course in a bid to broaden his appeal.

“I would much rather be in Warren or Harris or Mayor Pete’s shoes than in Bernie Sanders’ right now, because he does not have a lot of room to grow and seems pretty stuck in place,” said Mo Elleithee, a former spokesman for Hillary Clinton and the Democratic National Committee who currently serves as the executive director of Georgetown University’s Institute of Politics and Public Service.

Adding to the challenge for Sanders are the Republican Party’s efforts to frame 2020’s election as a referendum on socialism.

“Bernie Sanders explicitly embraces the term ‘socialist,’” said Daniel Hopkins, a political science professor at the University of Pennsylvania, and a primary victory by the Vermont senator, who forcefully reaffirmed his democratic socialist beliefs during a speech earlier this month, would likely make the GOP’s attacks against socialism “very, very resonant.”

Though he remains in a strong position, Sanders has failed to build on his coalition within the Democratic Party. He has yet to recover the 5 percentage points of first-choice support among Democratic primary voters that he lost in the weeks immediately following Biden’s entrance into the race on April 25. During that same time period, Warren has doubled her vote share from 7 percent to 13 percent, and Buttigieg surged 9 points between March and late April.

Sanders’ campaign did not respond to a request for comment.

While the data does present some problems for Sanders, Trump’s relative unpopularity provides some cause for optimism and could be used to burnish the Vermont senator’s case and that of  other Democratic candidates. After all, the president is nearly 20 points underwater in Michigan and Wisconsin, and almost 10 points underwater in Pennsylvania. Losing any of those states in 2020 would make the pathway to another term in office extremely narrow.

“Electability might be less important this year than in other years because almost any Democrat will do,” said Stephen K. Medvic, a professor of government and program chair of public policy at Franklin & Marshall College.