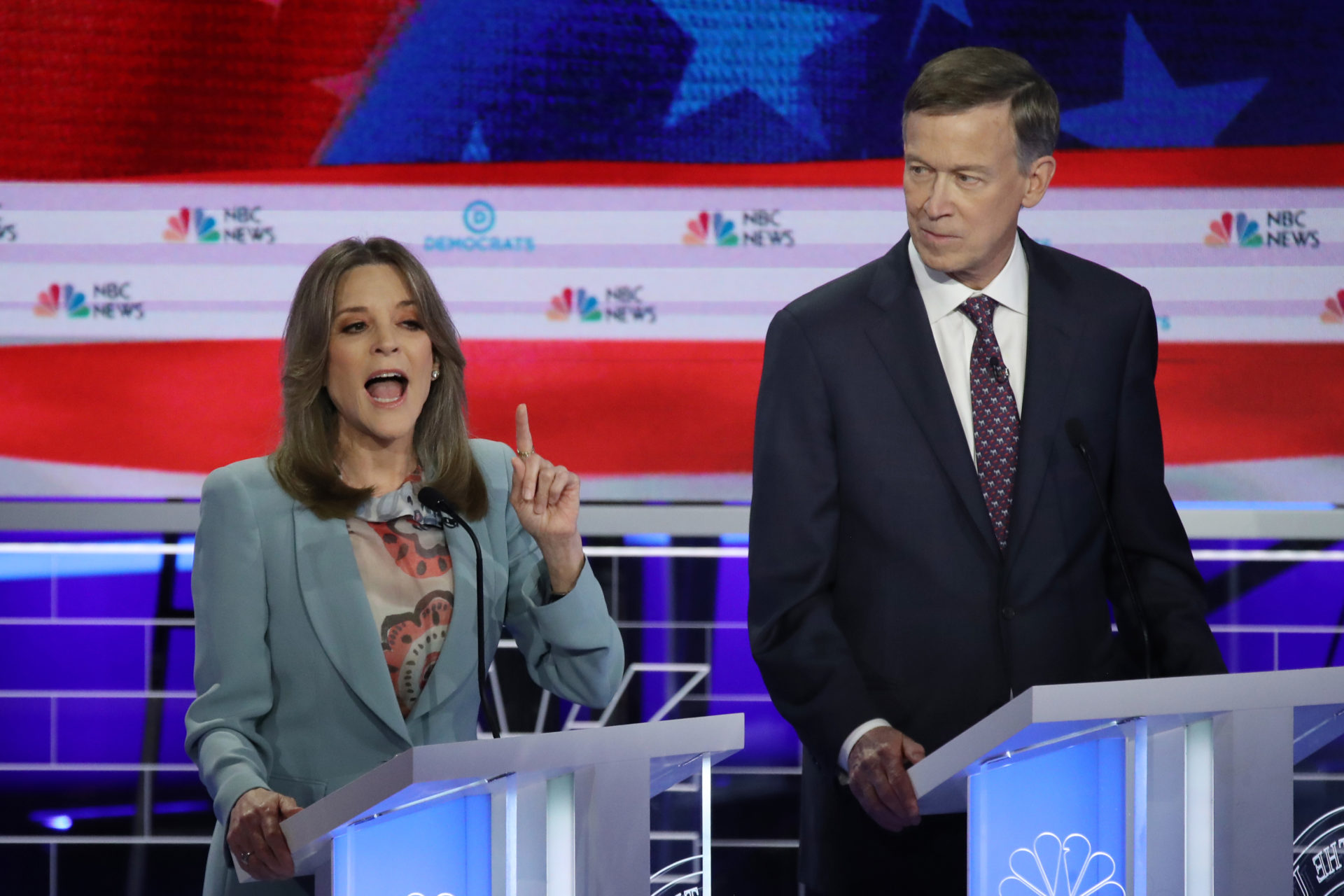 Marianne Williamson may be among the longest shots for the Democratic presidential nomination, but she emerged from last week’s debates as the winner on one count: an elevated profile.

Two Morning Consult/Politico polls — one conducted before the June 26-27 Democratic debates in Miami began and another conducted after their conclusion — found the share of registered voters nationwide who could correctly identify an image of the self-help author increased 10 percentage points, more than any of the other 19 candidates who appeared on stage over the two nights. Nineteen percent of voters correctly identified Williamson in the June 29-July 1 survey, compared with 9 percent in the June 20-23 poll. 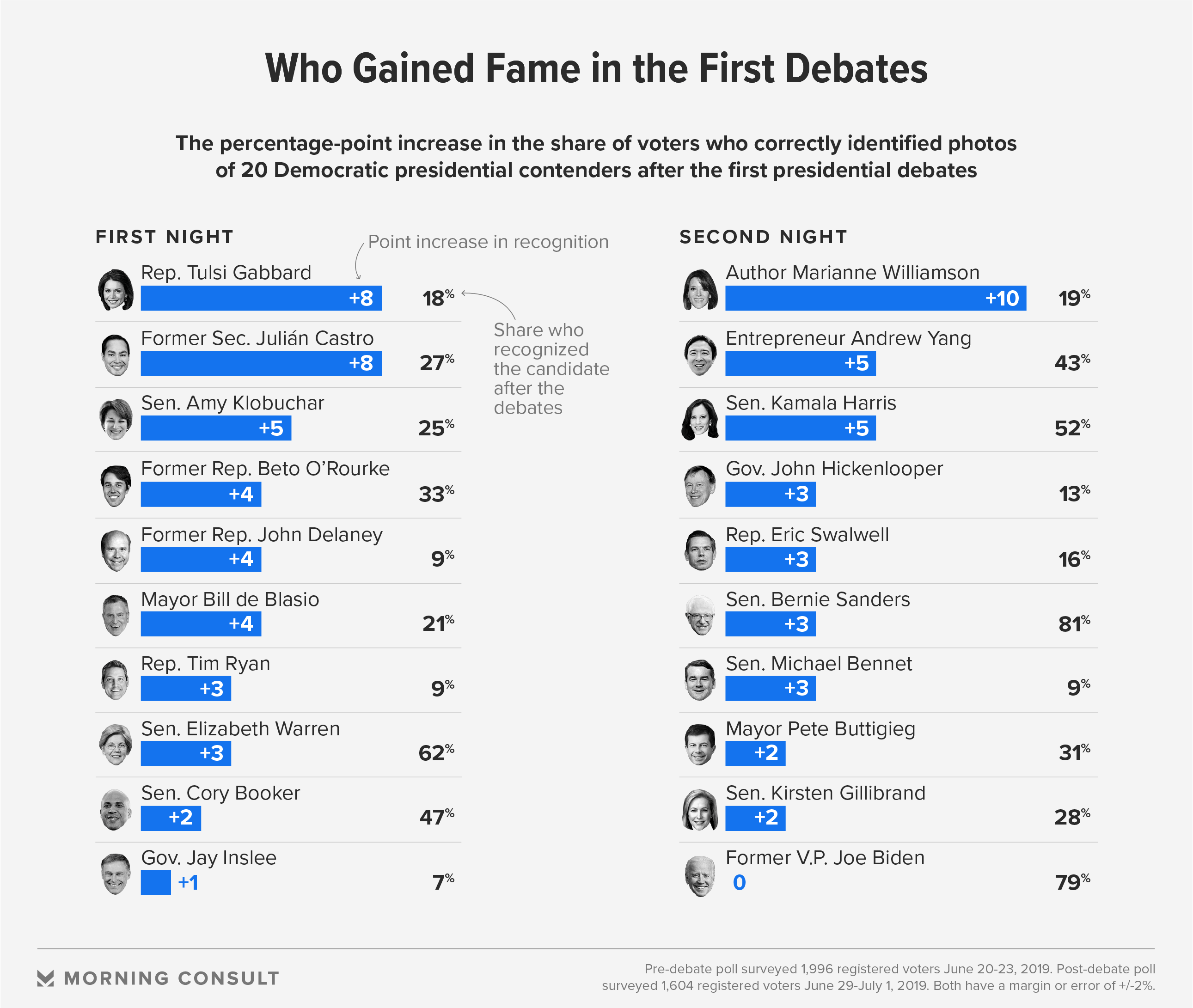 Williamson’s recognition was small compared to the race’s front-runners, former Vice President Joe Biden and Sen. Bernie Sanders (I-Vt.), who were correctly identified by roughly 4 in 5 voters after the debate. But Williamson emerged from the post-debate news cycle more recognizable than several of her peers near the bottom of the pack in Morning Consult’s weekly tracking of the race: Gov. Jay Inslee of Washington, Sen. Michael Bennet and former Gov. John Hickenlooper of Colorado, Rep. Tim Ryan of Ohio and former Rep. John Delaney of Maryland.

Williamson’s surge in facial recognition came after she made the most of her five minutes of speaking time — less than the eight-minute average for candidates over the two nights, according to an analysis by The Washington Post. But polling indicates her performance — which will perhaps be best remembered for her pledge to call New Zealand’s prime minister on Day 1 of her hypothetical presidency to tell her, “Girlfriend, you are so on” —  may have done more to damage her candidacy.

Another June 29-July 1 Morning Consult/Politico survey found 31 percent of registered voters who tuned in for the debates said Williamson did a “poor” job on the stage, the highest share of negative views for any candidate. Her net favorability, the share of voters who view her favorably minus those who view her unfavorably, also declined by 8 points, with voters more than twice as likely (20 percent to 8 percent) to hold negative views of her.

Williamson’s performance was followed by a surge in attention on Google, and the comedian Kate McKinnon, known for her impersonations of Hillary Clinton and Elizabeth Warren on NBC’s “Saturday Night Live”, debuted a fresh impression of Williamson on NBC’s “Late Night with Seth Meyers” hours after the debate concluded.

In addition to her viral moments, Williamson had the benefit of being on stage with a number of the party’s leading contenders for the nomination, including Biden, Sanders, Sen. Kamala Harris of California and South Bend Mayor Pete Buttigieg of Indiana. The second-night debate drew 18 million viewers, according to NBC, nearly three million more than the number who watched Wednesday’s debate.

Harris, who spoke for about 12 minutes Thursday night, was correctly identified by 52 percent of voters after the debate, up 5 points from the survey conducted before. She drew the biggest increase in first-choice support among Democratic primary voters after attacking Biden for his opposition to federal involvement in busing.

Former Housing Secretary Julián Castro and Rep. Tulsi Gabbard of Hawaii also raised their profiles among voters, by 8 points each, while the share who could identify other lesser-recognized candidates, such as Buttigieg and New York Sen. Kirsten Gillibrand, moved within the polls’ 2-point margins of error.