Ahead of 2020, Democrats See Climate ‘Crisis’ Where Republicans See ‘Problem’ 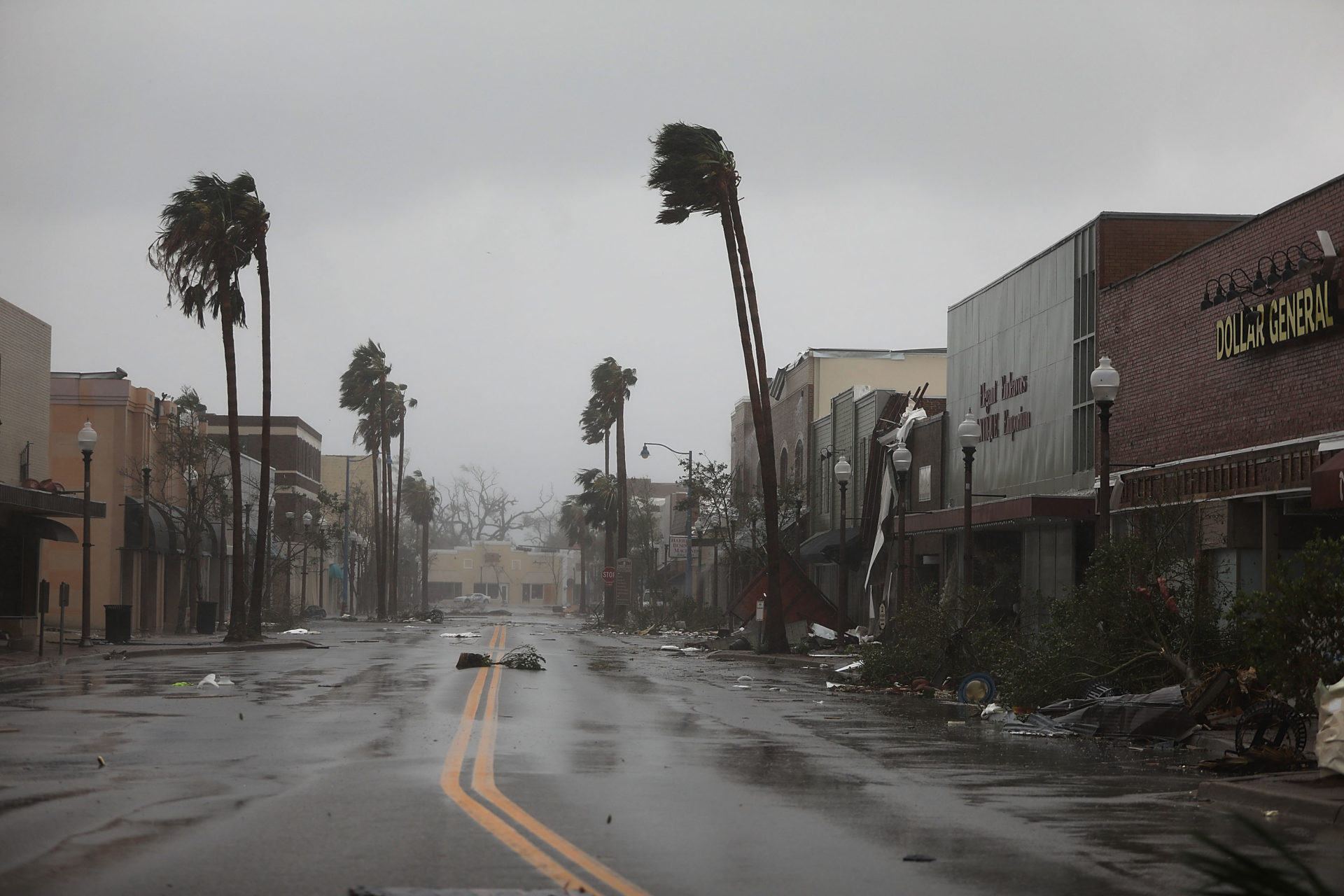 Debris remains on the streets of Panama City, Fla., after Hurricane Michael passed through the downtown area on Oct. 10, 2018. A Morning Consult survey of 2,200 U.S. adults conducted June 13-17 found that 45 percent of Democrats said they consider climate change a crisis, compared with 26 percent of independents and 8 percent of Republicans. (Joe Raedle/Getty Images)
By Jacqueline Toth

Tropical Storm Barry has developed in the Gulf of Mexico with the possibility of upgrading to a hurricane, and wildfires have impacted 855,000 acres in Alaska alone this year so far. Amid these events, there is still an intense partisan divide over concern about climate change and its role in extreme weather, according to a recent poll.

A Morning Consult survey of 2,200 U.S. adults conducted June 13-17 found that 45 percent of Democrats said they consider climate change a crisis, compared with 26 percent of independents and 8 percent of Republicans. The poll, which has a margin of error of 2 percentage points, underscores the possibility that an extreme weather period between now and November of next year could have some impact on the 2020 elections. But environmental researchers say it’s unclear whether such natural disasters are likely to drive voter turnout or demonstrably affect outcomes.

After Hurricane Harvey and during Hurricane Irma, a Morning Consult poll in September 2017 found an uptick of 7 points in Republican voter concern over climate change and its impact on the environment to 57 percent, with a 3-point margin of error for the party. But those numbers subsequently declined, and no comparable increase was seen during the difficult 2018 Western wildfire season. In February, 41 percent of GOP voters said they were concerned about climate change’s impact on the U.S. environment, compared to 88 percent of Democrats. 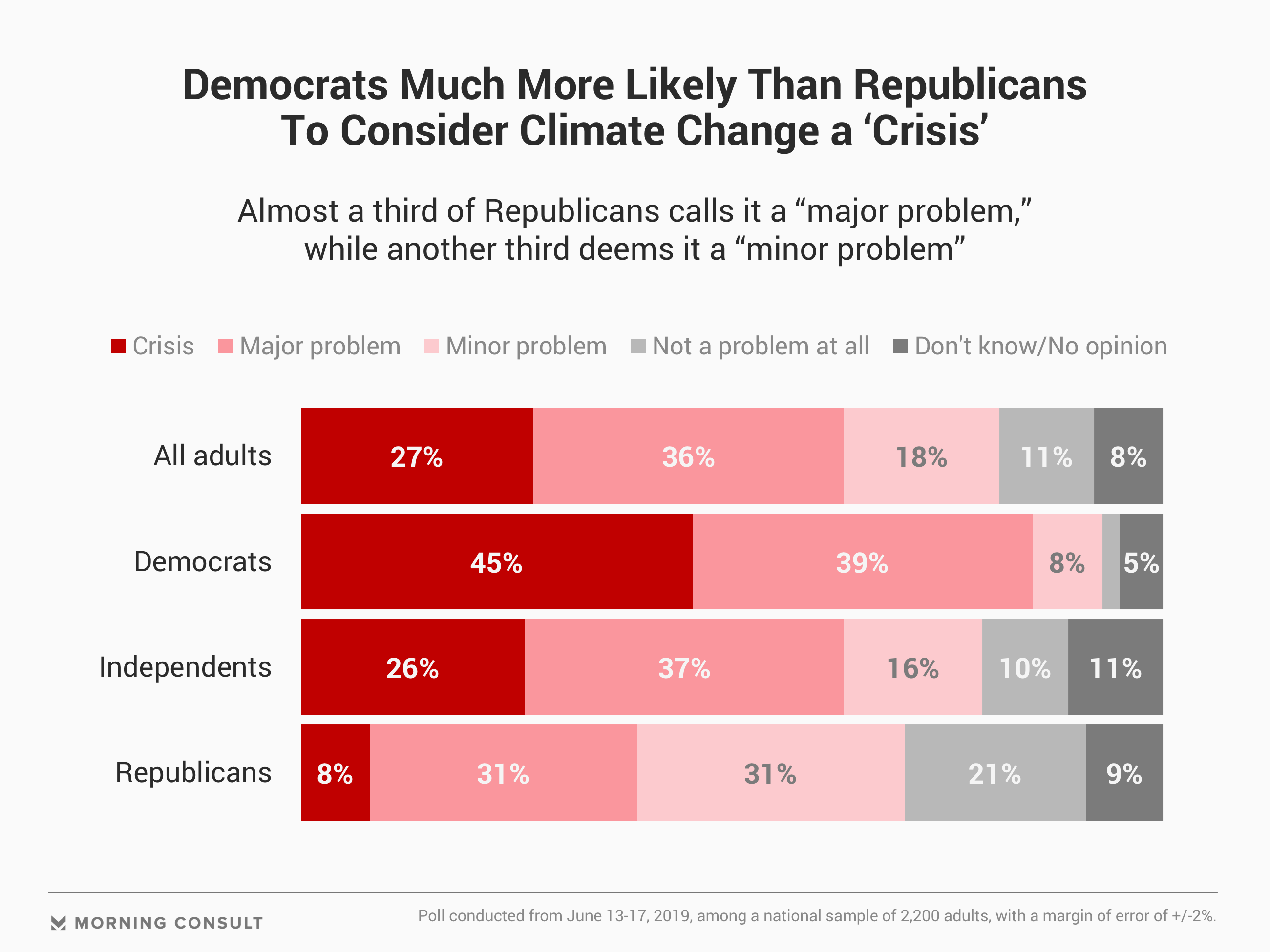 Close to 2 in 3 adults said climate change is making natural disasters more frequent and stronger, similar to registered voters polled in October 2018, after Hurricane Florence had passed over North Carolina and as Hurricane Michael was concluding in the South.

And the party divide remains, with 80 percent of Democrats, 61 percent of independents and 43 percent of Republicans believing that climate change makes natural disasters occur more often.

Whether a particularly active stretch of hurricanes or fires in the United States would have an impact on next year’s elections remains up for debate.

The 2020 elections are unprecedented in that climate issues are getting more attention than in the past — but it is mostly salient among activists and primary voters, said Parrish Bergquist, a post-doctoral researcher at the Yale Program on Climate Change Communication. “We still don’t know how important it will be in the general election,” she said.

While research has shown that extreme weather events can have a short-lived impact on climate change opinions, “one thing we don’t know yet is how these effects might accumulate over time and how they might change in magnitude as these events get more and more frequent,” Bergquist said.

It also depends in part on how public figures and the media talk about the storms, which can affect the public’s opinions on climate change, Bergquist said.

Megan Mullin, an associate professor of environmental politics at Duke University, thinks it is unlikely for anything climate-related to have a significant impact on the elections, at least nationally. “There’s just too much going on in the political world that’s more immediate,” and the perception people have of climate-related events “is filtered so strongly through their predispositions,” she said.

To date, bad weather events, “even those that can be tied to climate change,” have not seemed to change political conceptions on the issue, said Joseph Majkut, director of climate policy at the Niskanen Center think tank. “I don’t know that that will always be the case,” he said, adding that it is difficult to project what will stick in politics.

“Extreme weather events caused by climate change affect the overall mood of the country heading into an election, and that can matter, rather than spawning millions of single-issue voters,” Bledsoe said. “It’s more this sense that the sheer scale of natural disasters shows a president not entirely in charge.”

In the June poll, 57 percent of U.S. adults said climate change is being caused by human activity, while about a quarter (26 percent) said it is a natural phenomenon. Five percent said it is not happening, and 12 percent did not know.

The results are consistent with Morning Consult/Politico polling of registered voters in December, which showed 58 percent of adults consider climate change to be primarily human-caused, compared to 30 percent who said it is a natural occurrence.