With ACA Back in Court, Voters Still Litigating Obama’s Role in Health System 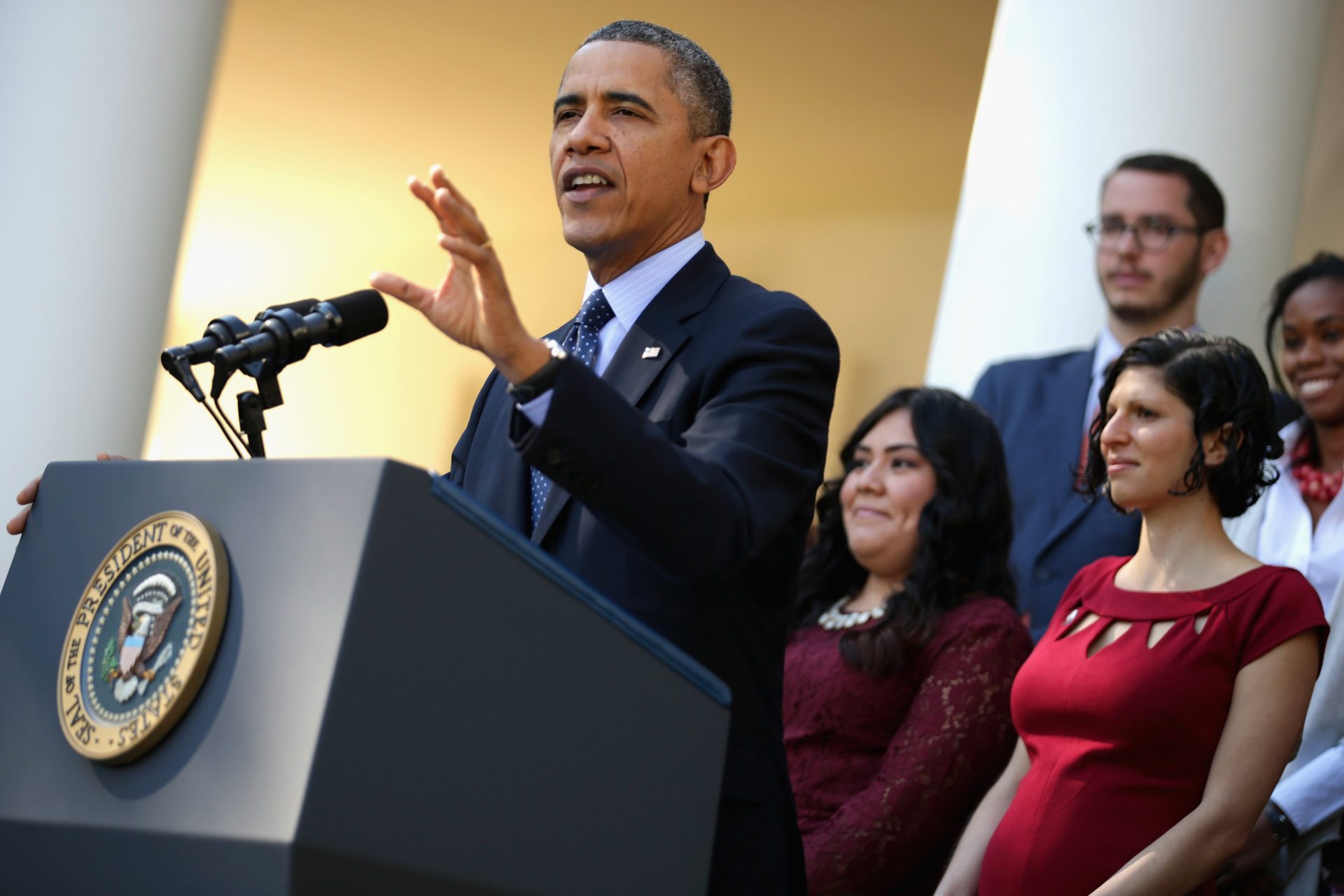 President Barack Obama delivers remarks about the launch of the Affordable Care Act's online enrollment website in the Rose Garden of the White House on October 21, 2013 in Washington, D.C. (Chip Somodevilla/Getty Images)
By Yusra Murad

It’s Obama’s health care world, and we’re all (still) living in it.

Nearly a decade removed from the passage of the Affordable Care Act and five years from its full implementation, the sweeping 2010 health law has found itself ahead of the courts once again, as a coalition of Republican attorneys general and the Trump administration argue it violates the Constitution and should be struck down in its entirety.

Though the case represents one of the greatest threats to the ACA in its history, the public response has been half-hearted at best — perhaps because, according to new Morning Consult data, a fair share of Americans are taking a believe-it-when-we-see-it approach. 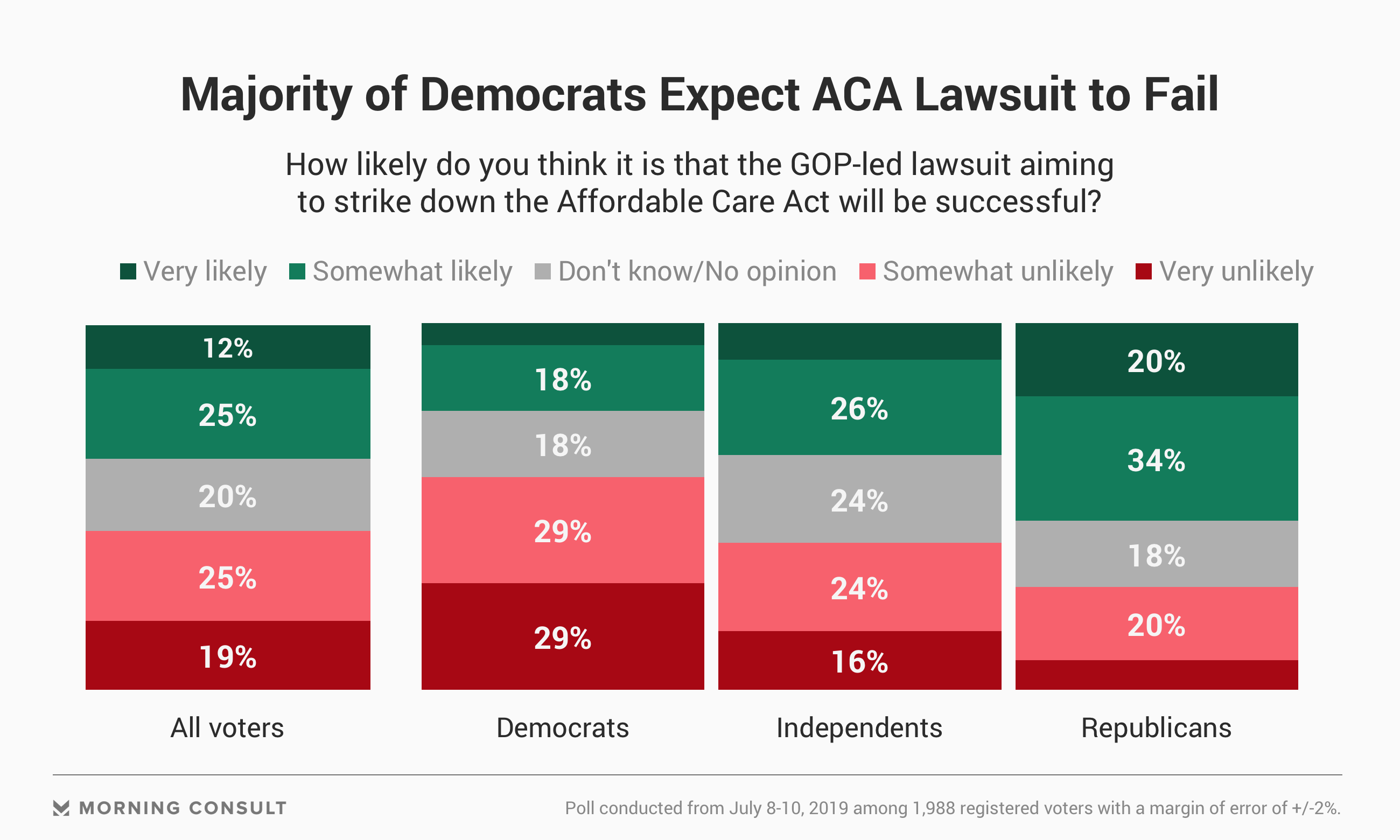 In a July 8-10 survey of 1,988 registered voters, a 44 percent plurality said it’s unlikely that the lawsuit will be successful in gutting the ACA, compared to 37 percent who see it as a possibility. Faith in the lawsuit’s success rests comfortably along party lines: Democrats aren’t betting on it, with almost 6 in 10 saying the court is unlikely to upend the ACA, while a majority of Republicans (54 percent) say the opposite. The survey has a margin of error of 2 percentage points.

Abbe Gluck, a law professor and founding faculty director of the Solomon Center for Health Law and Policy at Yale Law School, cited several reasons for the relative lack of attention, including the highly unusual consensus — even among experts who generally oppose the ACA — that the lawsuit is meritless.

“Ironically, the legal consensus about the incorrectness of the lower-court decision has resulted in less media attention to the case,” Gluck said.

That lower-court ruling in the Northern District of Texas from Justice Reed O’Connor, who concluded the elimination of the individual mandate rendered the rest of the law invalid, has elicited criticism from legal experts across the political spectrum. But during Tuesday’s oral arguments, a panel of judges on the U.S. 5th Circuit Court of Appeals appeared receptive to that logic, giving those who predicted that the case may never reach the Supreme Court reason for pause.

“You want to hold two thoughts in your head at the same time: It doesn’t stand a very good likelihood of succeeding because the legal arguments are so weak, but there’s no such thing as risk-free litigation,” said Nicholas Bagley, a law professor at the University of Michigan. “If they do end up striking down all or part of the ACA, it’s pretty much a guaranteed ticket to the Supreme Court.”

This is not the ACA’s first confrontation with legal challenges, but this time, top lawmakers from both parties have been relatively less animated about the possibility of repeal. Republicans have worked to distance themselves from the case, wary of its implications for millions of Americans with pre-existing conditions and haunted by the 2018 midterm elections, in which dozens of Republicans were unseated over the issue of health care.

Kevin Madden, a political analyst and former senior adviser to Mitt Romney’s 2012 presidential campaign, said there is not a great deal of awareness about the lawsuit among Republicans, despite repeal-and-replace being a rallying cry for much of the electorate.

“This is an issue that can shift to becoming a huge liability for Republicans,” Madden said. If the court rules against the ACA and Republicans have to draw up a replacement, and are unprepared to do so, “the expectations will have been built up to a point where they might become unmanageable.”

Among voters who think the ACA may be gutted, 60 percent are confident the Trump administration has a replacement plan. That includes 87 percent of Republicans.

For months, President Donald Trump has vowed his administration is on the brink of unveiling a health plan fit to replace the ACA. That plan — or any of its details — has yet to be seen.

Across the aisle, about a quarter (24 percent) of Democrats say the lawsuit is likely to succeed. While party leaders have recently been more vocal about their opposition to the case, they are cognizant that voters remain focused on issues taking shape in the 2020 primary, such as “Medicare for All” and other pathways to universal coverage.

Patrick McHugh, the executive director of Democratic super political action committee Priorities USA, noted that while the primary is an opportunity for individual candidates to distinguish themselves from one another, the general election is where the party may shift focus to the lawsuit to distinguish itself from the GOP.

The poll also found that, two years into his presidency, voters are beginning to shift more responsibility to Trump for the present state of the nation’s health care system — a state that 1 in 2 respondents said has worsened over the past decade. In the July survey, 31 percent of respondents assigned the current president more responsibility than his predecessor, up from 24 percent who said the same last October. In comparison, 43 percent of voters said former President Barack Obama was responsible for the state of health care. 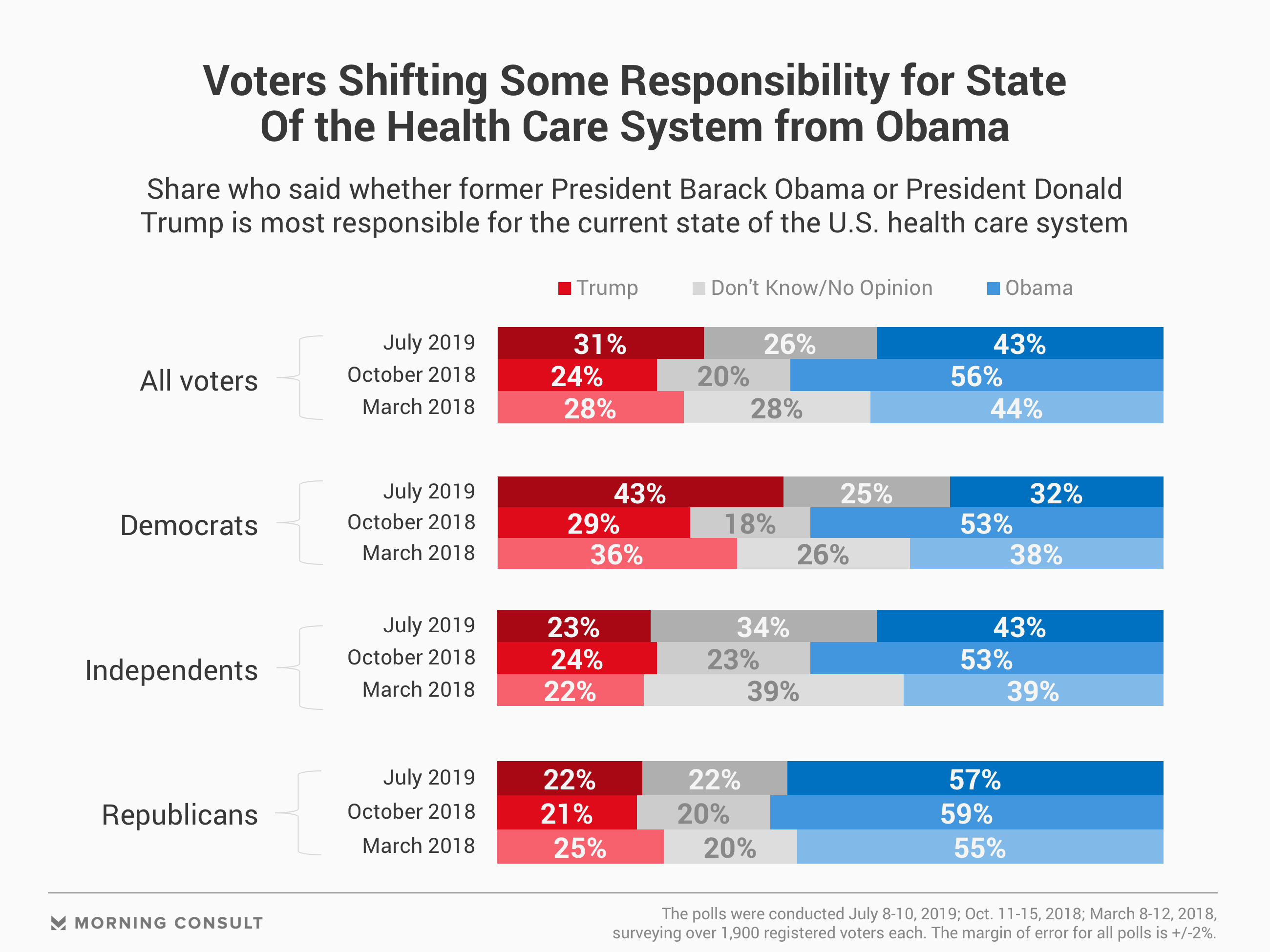 Republicans and federal health agencies under the Trump administration have made myriad attempts of various magnitudes to chip away at the ACA during his tenure in office, ranging from the expansion of short-term plans to the infamous 2017 repeal attempt, which ultimately failed in the Senate. Voters who said the state of the health system has deteriorated over the past 10 years were more likely to hold Trump responsible compared with voters who said the situation has improved or stagnated, by a margin of 7 points.

Still, the former president is the recipient of more credit and blame for both the state of the ACA and the health system. That’s unique, given that the public generally tends to look to their sitting president to take ownership over other issues, such as economy, security and immigration, experts noted.

As a result, the ongoing lawsuit is as much a referendum on Democrats’ fundamental beliefs on health care as it is about a statute.

“For the past decade, the whole debate has been framed around the issue of not just health care, but quote  unquote Obamacare,” Madden said. “The association with Obama will linger with the political generation that witnessed the most important national debate over it.”

While the Trump administration has done everything in its power to sabotage the statute, Gluck said, the law has proved resilient. But that doesn’t mean it’s invincible.

“Every aspect of our health care system is now touched by the Affordable Care Act, and the public does not seem sufficiently aware that this case could take it all away,” Gluck said. “People have thought for a long time that it’s never going to get that far. But after 10 years of this statute, you never can be sure.”