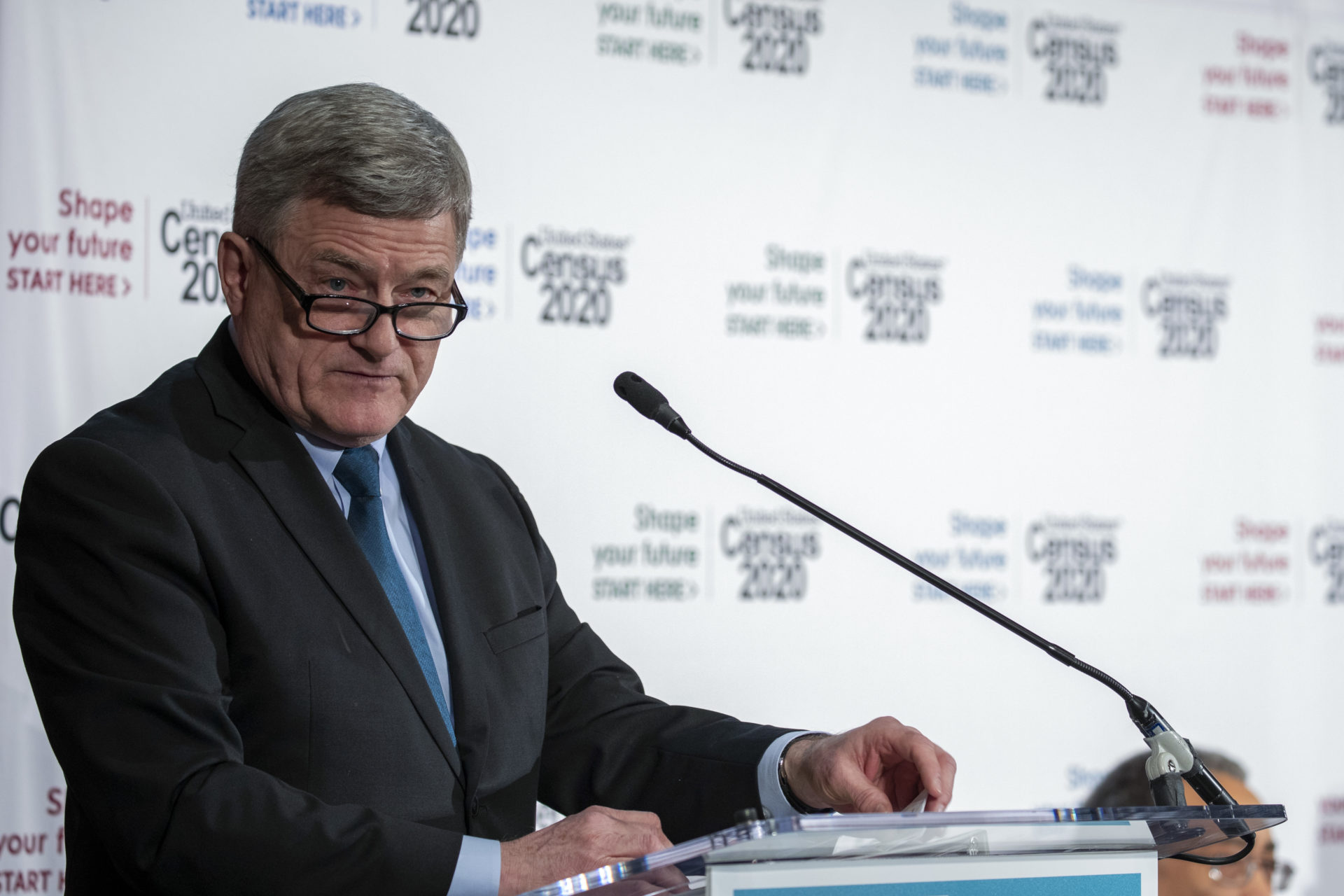 U.S. Census Bureau Director Steven Dillingham speaks about the 2020 census at an April 1 event at the National Press Club. The bureau plans to hire roughly twice the amount of partnership specialists to encourage participation in next year's survey. (Tasos Katopodis/Getty Images)
By Dwight A. Weingarten

The fight over adding the citizenship question to the 2020 census and fallout from former special counsel Robert Mueller’s investigation into Russian interference of the 2016 election have dominated discussion in Washington for months, but there has been less focus on a common thread that experts believe deserves more attention: foreign interference that could happen again when the decennial questionnaire is released next year.

John H. Thompson, who directed the Census Bureau from August 2013 to June 2017, expressed concerns about a repeat of the practices that occurred leading up to the election, when the Russia-based Internet Research Agency created fake social media accounts that targeted minority groups and spread disinformation in a bid to tip the scales in President Donald Trump’s favor, according to Mueller’s report.

“I would certainly worry about foreign actors trying to disrupt the 2020 census,” Thompson said in an April interview.

Arturo Vargas, chief executive of the National Association of Latino Elected and Appointed Officials, who works with top census officials as a member of the bureau’s National Advisory Committee on Racial, Ethnic and Other Populations, said the potential inclusion of a citizenship question was “the biggest challenge” facing the bureau, but another hurdle will be ensuring respondents feel secure to fill out the form.

“I think threats come from within the country and outside the country,” said Vargas, citing a New York Times report that said a neo-Nazi website had already tried to influence who works for the Census Bureau.

Vargas said he expects there to be disinformation campaigns to undermine the census similar to what occurred in the lead-up to the 2016 election.

“We all need to be working together,” said Vargas, noting that his organization has been part of conversations to ensure an accurate count. “We need to make sure that the content on social media is accurate.”

A representative from Twitter Inc. said in an email that the company joined with representatives from the Census Bureau for a workshop earlier this year, while Facebook Inc. Chief Operating Officer Sheryl Sandberg said late last month that the company will treat the upcoming census like an election to protect against interference.

“We’re building a team dedicated to these census efforts and introducing a new policy in the fall that protects against misinformation related to the census,” said Sandberg, adding that the company will partner with nonpartisan groups to help promote proactive participation in the census.

The threat of foreign meddling in the census was absent from the discussion when the House Appropriations Subcommittee on State, Foreign Operations and Related Programs met this week to look for answers to combat Russian disinformation campaigns across the globe, but those involved in the 2020 census process are doubling down on their ground game in a bid to prevent online disinformation efforts designed to disrupt the operation.

The Census Bureau has already hired over 800 partnership specialists who work to create awareness in local communities about the importance of participating in the survey, with plans to bring on roughly 800 more of these “census ambassadors,” according to a bureau spokesperson. That target number of partnership specialists represents about twice the amount hired during the 2010 census.

These specialists are “key” to ensuring a fair and accurate account of the census through proactive education efforts, and are “picked because they understand their communities,” said Maria Filippelli, a public interest technology census fellow at New America, a D.C.-based think tank.

“Once disinformation gets out there, it could be relatively small, but sometimes it’s hard to undo,” said Robert Goldenkoff, director of strategic issues at the Government Accountability Office who has been monitoring the bureau’s preparations for 2020.

Goldenkoff said the bureau needs the ability to respond rapidly to situations on social media in order to prevent disruptions or depressed response rates that could alter the quality of the data and drive up costs.

The bureau, by law, must deliver the apportionment counts to the president by Dec. 31, 2020 and deliver redistricting data to states by March 31, 2021.

Goldenkoff said the bureau’s upcoming operations must be “almost like a symphony.”

“Everything has to work together and all the different operations and systems need to start and stop on schedule and they need to work in concert with one another,” he said.

Steven Dillingham, the current director of the Census Bureau, is scheduled to testify at a hearing of the House Oversight and Reform Subcommittee on Civil Rights and Civil Liberties on July 24, to update members of Congress on planning and preparations for the 2020 Census.