On Controlling Health Costs, Most Voters Trust … No One

Faith in federal agencies to keep costs low is 43%, while every other entity polled fares worse

U.S. Secretary of Health and Human Services Alex Azar speaks on prescription drugs for the market during the 2018 National Academy of Medicine Annual Meeting on Oct. 15, 2018 at the National Academy of Sciences in Washington, D.C. Forty-three percent of voters trust federal agencies like HHS to lower health care costs. (Alex Wong/Getty Images)
By Yusra Murad July 16, 2019 at 4:18 pm ET

As Democratic frontrunner candidate Joe Biden attempts to combat the building enthusiasm for “Medicare for All” with his proposal to build on the Affordable Care Act without disrupting the private insurance market, a new Morning Consult poll finds less than a quarter of voters trust private insurers to keep the cost of health care low.

And despite pushback from moderate Democratic lawmakers against plans that would dramatically expand the government’s role in health care, voters place more faith in federal health agencies than in either Congress or the insurance industry to fight for affordable health care.

In the July 8-10 poll of 1,988 registered voters, more than four in 10 said they had “a lot” or “some trust” in government regulators, such as the Health and Human Services Department and the Centers for Medicare and Medicaid Services, to keep the costs of health care low. That’s compared to 23 percent who said the same of the private insurance market.

Still, 47% said they didn’t have much or any faith in the government agencies to lower health care costs, and other entities drew even worse numbers. 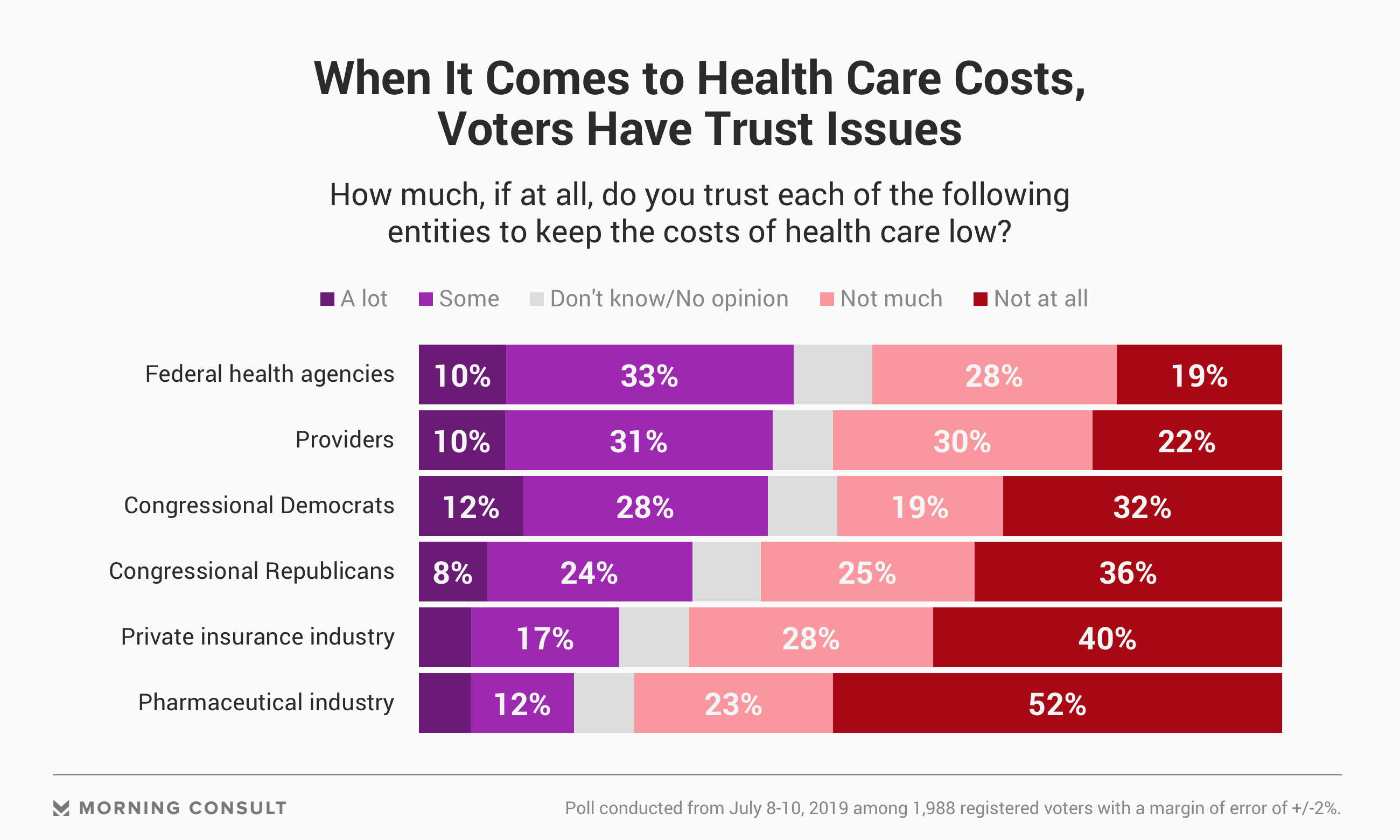 The survey comes as lawmakers and industry stakeholders scramble to earn Americans’ confidence that affordability is their priority. With Congress in gridlock and with little hope for substantive reform, trade groups representing insurers, providers and pharmaceutical companies have doubled down on working with leaders on Capitol Hill to churn out piecemeal solutions to Americans’ ballooning health costs.

But in spite of their best efforts, and millions of dollars spent on advertising, Americans aren’t betting on the myriad entities with power over the health care market to contain their costs.

The pharmaceutical industry in particular is the subject of intense ire among the public. Three in 4 voters say they have little or no confidence in drug companies to reduce costs; over half say they don’t trust pharmaceutical companies at all.

In recent weeks, two of the Trump administration’s major drug pricing priorities — forcing drugmakers to disclose list prices in direct-to-consumer advertisements and prohibiting pharmacy benefit managers from pocketing any negotiated discounts on prescription drugs — have hit setbacks. Senate Finance Committee Chairman Chuck Grassley (R-Iowa) said he expects to finalize a deal to lower drug prices soon, though GOP lawmakers have expressed concern about a provision that would give the government power to set price caps on drugs covered under Medicare Part D.

The distrust of the pharmaceutical industry is one area where the parties find common ground. Republicans are only slightly more likely to trust the private health insurance market than Democrats, by a margin of 5 points (28 percent vs. 23 percent). The survey’s margin of error is 2 percentage points.

Just months into primary election season, support for enshrining the role of private insurers is the clear fault line on health care among Democratic candidates vying for the nomination, with advocates of a public option, which would allow people to buy into government health coverage like Medicare, leaning heavily into the argument that the 150 million people with employer-sponsored coverage shouldn’t be forced off the insurance they like.

Though Biden’s plan would keep relying on for-profit insurance and private hospitals, it still received immediate backlash from the industry, which is opposed to any iteration of a public option. The swift rebuke prompted Medicare for All advocates to question whether Democrats should attempt to appease the industry if they are bound to face opposition either way.

The Medicare for All plan from presidential candidate and Vermont Sen. Bernie Sanders, by contrast, would enroll all American residents, including undocumented immigrants, in a national health plan under the jurisdiction of the federal government.

Both Sanders’ and Biden’s campaigns did not respond to a request for comment.

Voters overall placed similar levels of confidence in providers (41 percent) as they did in congressional Democrats (40 percent) to help lessen the burden of medical costs, but a majority was still wary of both, with 52 percent of respondents saying they have little or no trust in doctors and hospitals and 51 percent saying the same of Democrats in Congress.

Two years of Morning Consult tracking data has consistently found that voters have looked to congressional Democrats to protect and improve health care ever since the GOP’s unsuccessful attempts to repeal and replace the Affordable Care Act, and the latest survey confirms that trend, with Democrats holding an 8-point lead over Republicans when voters were asked which party they trusted to lower health care costs.