DC vs. Marvel? For Fans, It’s More Like DC Plus Marvel 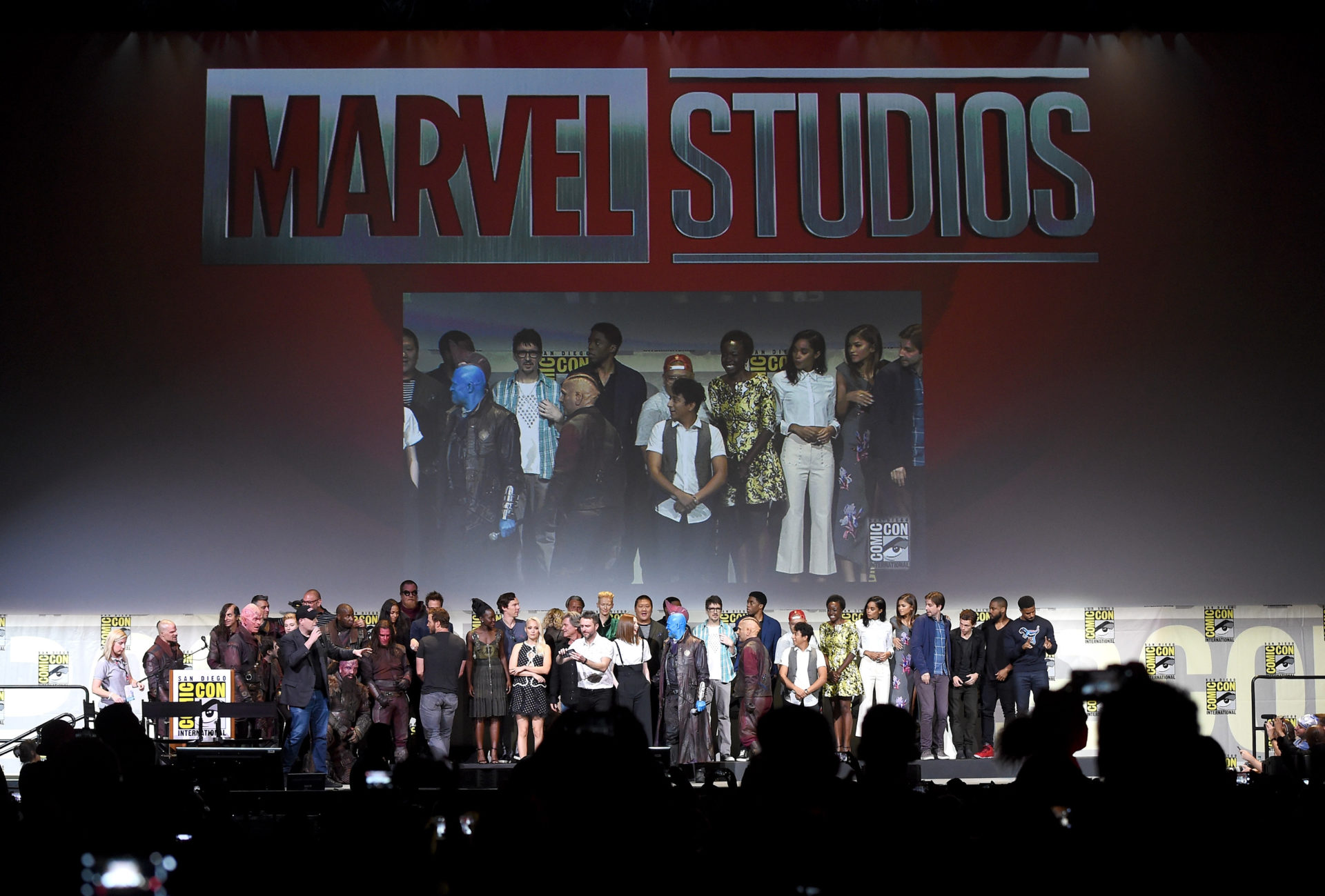 Pop culture fans are preparing to descend on San Diego on Thursday for Comic-Con, where a common question asked by fans at the panels is “Star Trek or Star Wars?”

Since the annual convention’s beginning, fans have been passionately loyal to their favorite franchises, but Morning Consult data suggest that these lines between these fan groups are in fact quite blurry.

The July 8-10 Morning Consult/The Hollywood Reporter survey of 2,200 U.S. adults looked at how much overlap exists between fans of popular franchises such as Harry Potter, “Doctor Who,” DC Comics and “Game of Thrones.”

The data shows that Marvel and “Star Wars” have the biggest overlap with other fandoms. But while video game Fortnite was at the bottom of the list in popularity — and subsequently last in crossover appeal — it has been able to capitalize on fandom overlap through collaboration with more popular franchises. 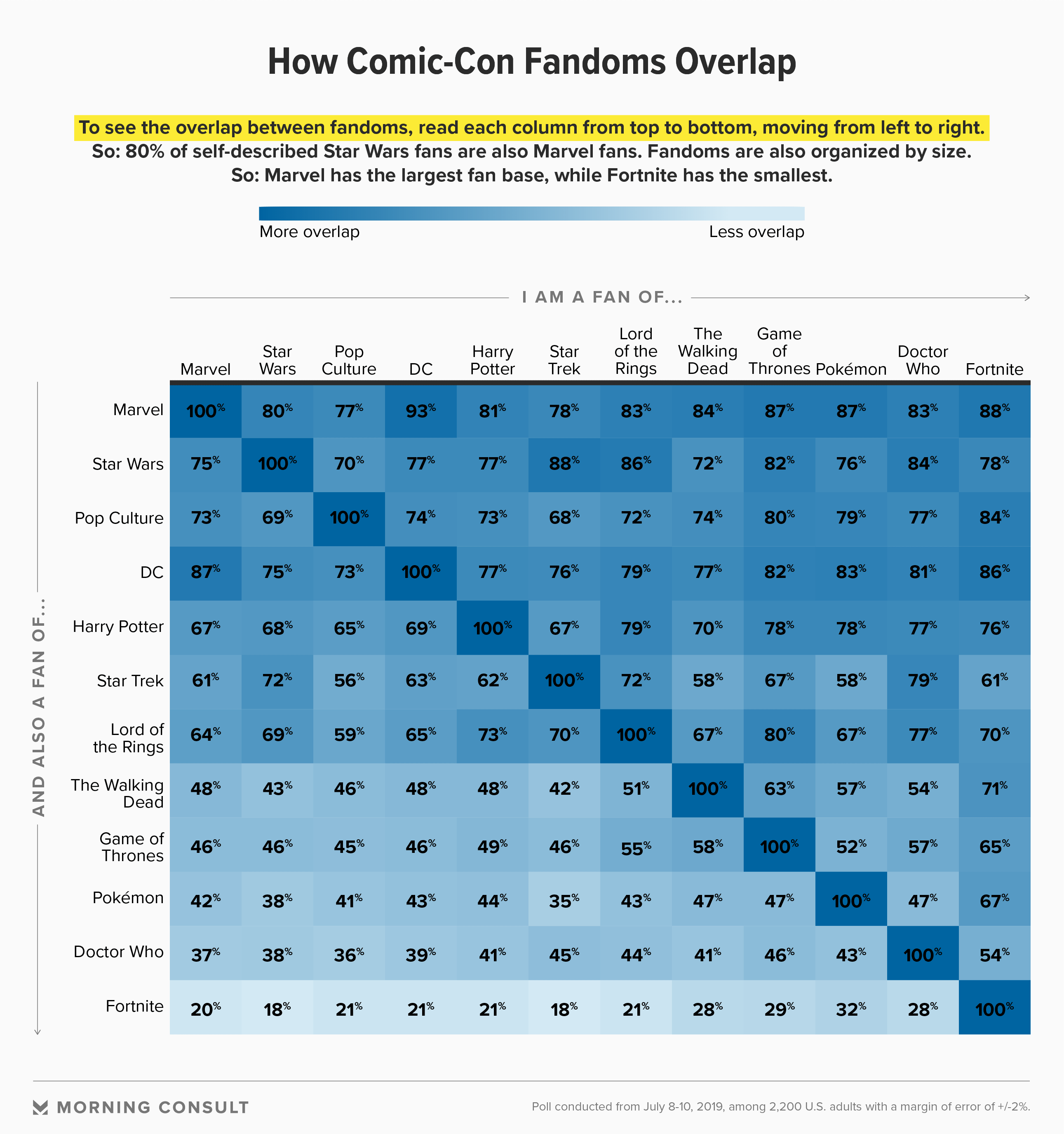 When looking at overall popularity of fandoms, Marvel came in at the top, with 63 percent of adults saying they are a fan of the superhero franchise. “Star Wars” tied for second (60 percent) with pop culture in general, with the DC Universe coming in right behind them at 59 percent.

According to Gene Del Vecchio, an adjunct professor of marketing at the University of Southern California and author of “Creating Blockbusters,” knowledge of where these fandoms cross over can help studios determine how to market upcoming releases. Beyond tailoring trailers to similar movies — for example, showing a preview for the latest “Star Wars” film before a new Marvel release — executives can also use fandoms for social media targeting.

“If a studio detects that a person shows an affinity for ‘Star Wars,’ they can target them with messages for similar genre films,” Del Vecchio said.

Epic Games Inc.’s video game Fortnite was the least popular of the 11 franchises polled, making it the least likely to have crossover appeal. The game had the most overlap with fans of the video game and anime program Pokémon, with roughly one-third (32 percent) of Pokémon fans describing themselves as Fortnite fans.

In April, to coincide with the release of “Avengers: Endgame,” Fortnite introduced a limited-time collaboration with Marvel, featuring characters such as Thanos and Avengers-related items like Captain America’s shield in the game. The video game has also featured crossovers with “John Wick” and “Stranger Things” and will soon launch a collaboration with Netflix Inc.’s upcoming “Dark Crystal” series. (Epic Games declined to discuss its partnerships and plans for future tie-ins.)

Del Vecchio said that the video game’s reach across fandoms may grow as its audience gets older. Roughly 63 percent of Fortnite’s players are between the ages of 18 and 24, according to April 2018 data from Verto Analytics.

“It could be that if they continue to play Fortnite as they age up, then you’ll start to see a greater overlap” with other franchises, he said.