Most Consumers Are OK with Companies, Celebrities Having Opposing Political Views

But they are ready to withdraw support over political endorsements, fundraisers 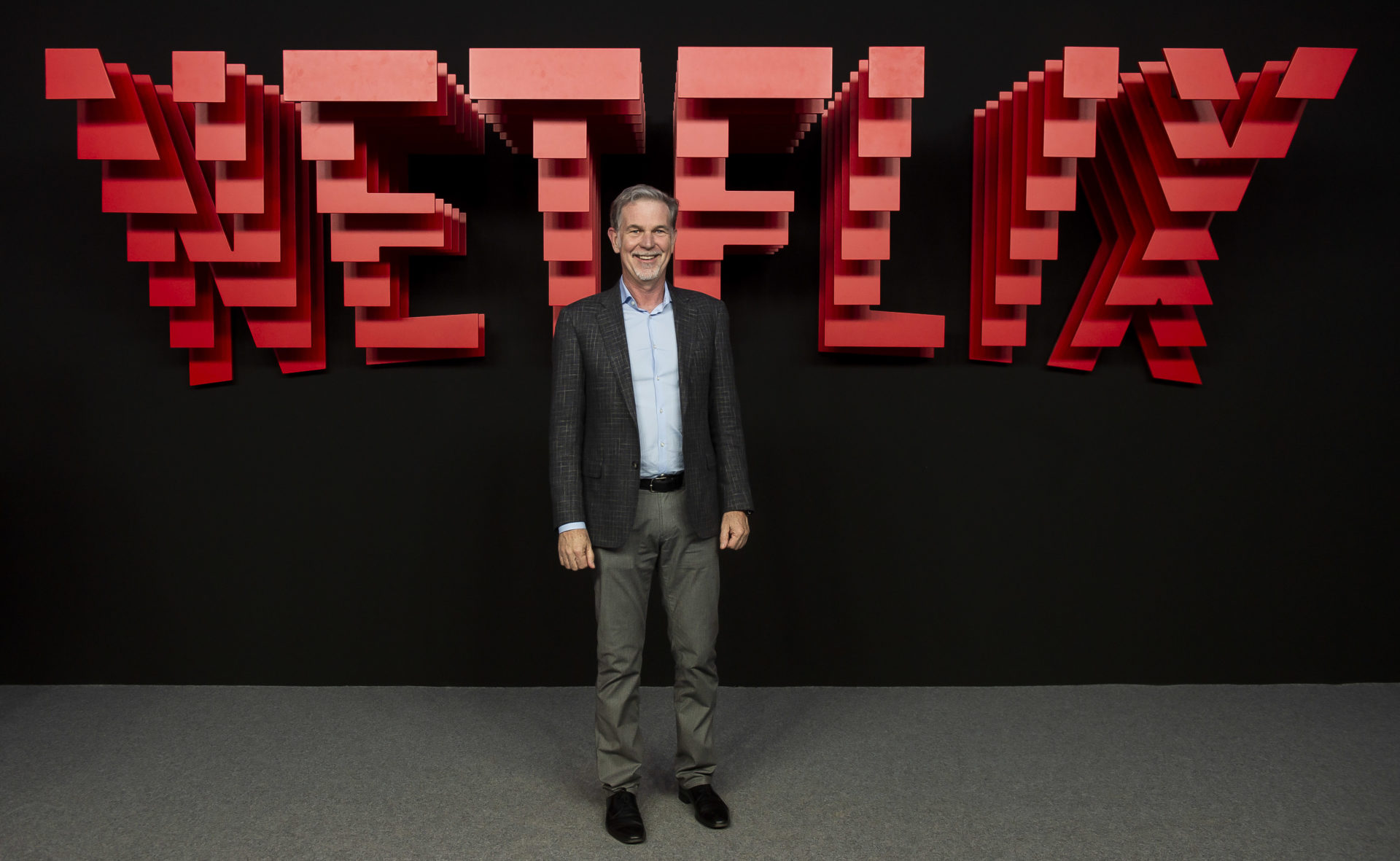 Netflix Inc. Chief Executive Reed Hastings’ recent fundraiser for Democratic presidential candidate Pete Buttigieg and Sen. Kamala Harris’ (D-Calif.) presidential campaign fundraiser at the home of music executive Scooter Braun are just a few of the campaign events that have been recently taking place in Hollywood, giving celebrities and industry insiders a chance to offer support to their favorite candidate. But new polling shows that while the public is comfortable with celebrities and business leaders holding opposing views, consumers are prepared to withdraw their business if companies and celebrities take action in favor of candidates or positions they don’t support.

The July 19-21 Morning Consult/The Hollywood Reporter survey found that 57 percent of the 2,200 U.S. adults surveyed — including 58 percent of Democrats and 56 percent of Republicans — said they would still be a fan of a celebrity if they held differing political views.  And 59 percent of adults said they would continue to purchase products or services from an entertainment company, such as Walt Disney Co. or Netflix, if they found out that one of its executives held differing political views, a sentiment shared by 59 percent of Democrats and 58 percent of Republicans.

But views shifted when those surveyed were asked about how they would feel if celebrities and those in the entertainment industry endorsed or held fundraisers for candidates.

Bill Werde, director of the Bandier Program at the Newhouse School at Syracuse University and the former editorial director of Billboard, says that celebrities “really know their audience,” which reduces the chance of backlash over conflicting ideologies. Werde cites Bruce Springsteen, an artist who has previously supported Democratic candidates, as someone who still gets support from both sides. 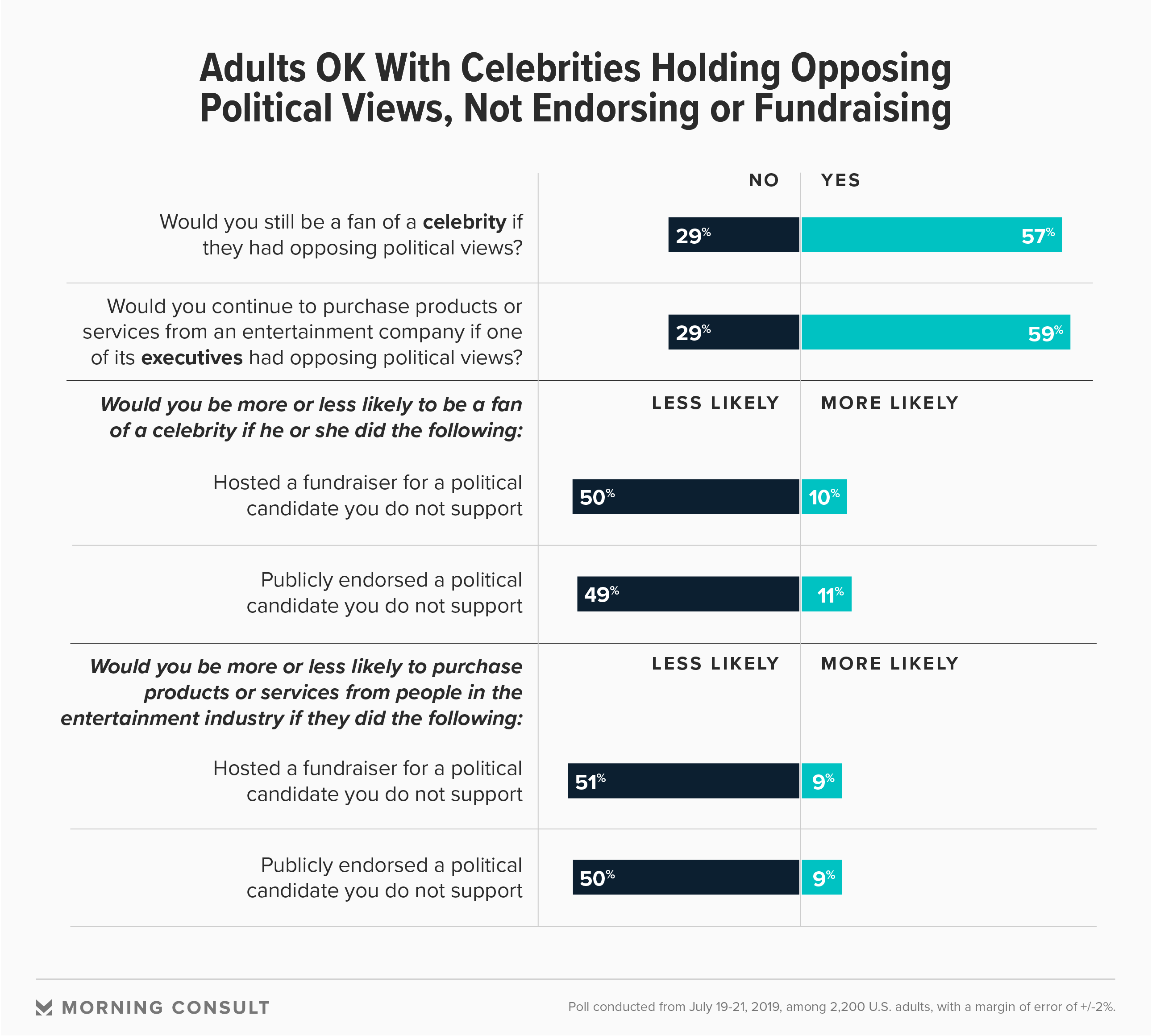 Among all adults, 51 percent said they would be less likely to purchase the products or services from people in the entertainment industry, including network executives and producers, if they hosted a fundraiser for a candidate they didn’t support. That share rose slightly when looking at party breaks, with 53 percent of Republicans and 54 percent of Democrats sharing that view.

However, 40 percent of all adults said they would be more likely to purchase products or services from people in the entertainment industry, including network executives and producers, if they hosted a fundraiser for a candidate they did support. An equal share had similar feelings regarding companies endorsing candidates.

According to Werde, much of the negative sentiment is like a “tempest in a teapot on social media,” with the online outrage usually dissipating after a couple of days. He noted that “most companies choose to play it safe” when operating in a polarized political climate.

But individual celebrities have the most to lose when getting political, he said, noting that they can’t “distance themselves from their own viewpoint.”

Related: Hollywood Should (Mostly) Stay Out of Politics