The Democratic Health Care Debate Is Intensifying. But Is Reform a Top Priority?

Even as leading candidates clash on proposals, health reform hasn’t surfaced to top of legislative agenda 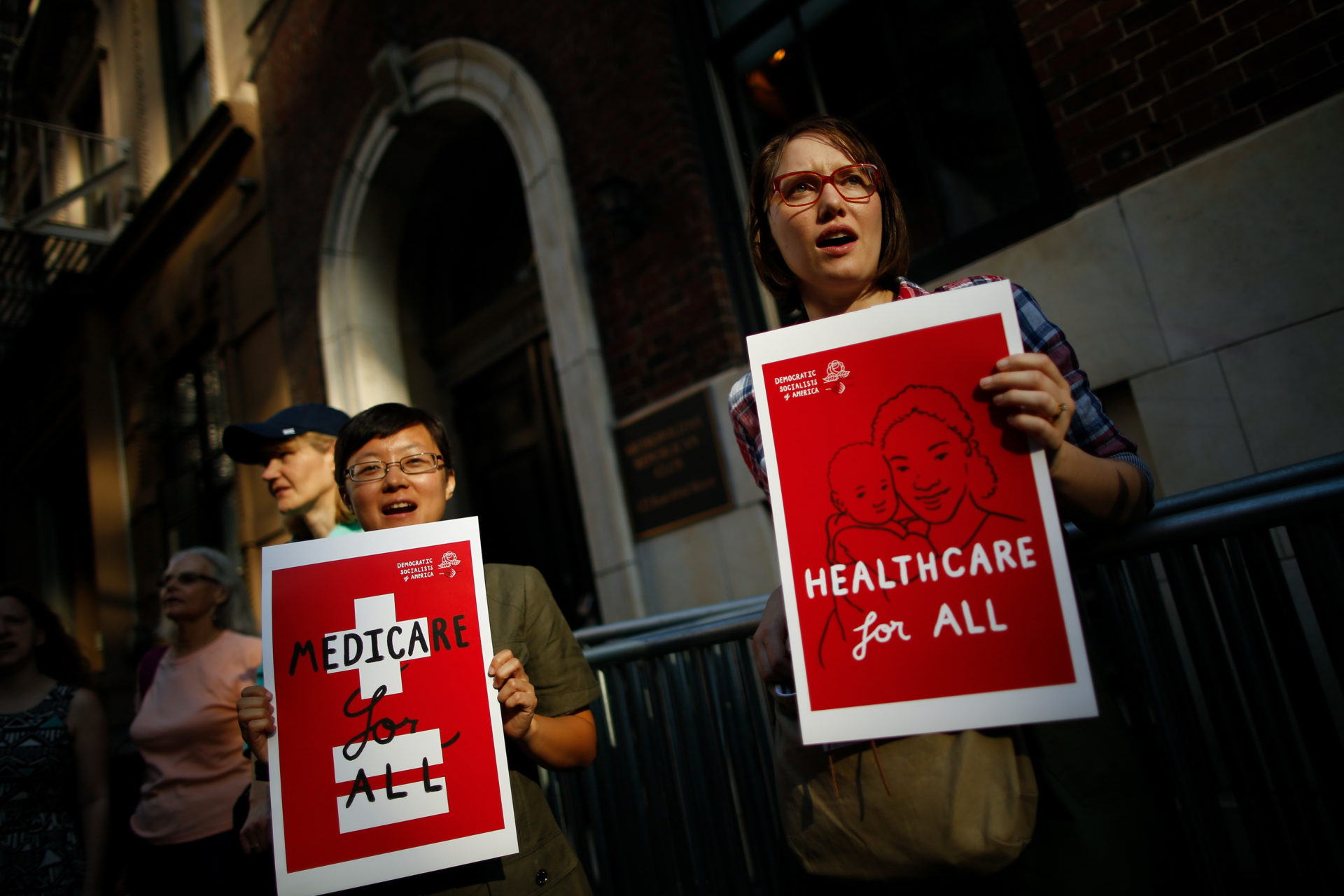 A small group of activists rally against the GOP health care plan outside of the Metropolitan Republican Club on July 5, 2017 in New York City. (Drew Angerer/Getty Images)
By Yusra Murad

In June 2007, when eight Democrats vying for the party’s presidential nomination were asked for the first time on a national debate stage their top priority for their inaugural 100 days in office, Barack Obama didn’t miss a beat. After bringing American troops home from Iraq, the then-junior senator from Illinois said he envisioned moving immediately on health care reform, optimistic it was a goal Congress could deliver on “very quickly.” Within three years, he would sign into law the Affordable Care Act, the most sweeping overhaul of the U.S. health care system since the 1965 passage of Medicare and Medicaid.

Over a decade later, while many of the two dozen Democratic candidates eyeing the White House in 2020 share enthusiasm for talking about health reform, the urgency — and perhaps optimism — appears to have subsided. Despite the presidential hopefuls clashing over the merits and mechanics of a “Medicare for All” system, experts note that none of the candidates named health reform as a first priority during the primary debates in Miami last month.

Ahead of the second forum in Detroit, leading presidential contenders have released health care plans one by one, with Sen. Kamala Harris (Calif.) most recently adding her proposal to the mix. Easily distinguishable from Sen. Bernie Sanders’ (I-Vt.) “Medicare for All” bill, Harris’ plan enshrines a role for private insurers, akin to the current Medicare Advantage program.

The stage is set for candidates to debate the extent to which private insurers should be replaced by a government-run plan — if at all — but unilateral focus on that question could distract from a broader trend. Even public option proposals, deemed the less-disruptive approach, face fierce opposition from Republicans and powerful stakeholders, and require a president hell-bent on health care reform if they have any chance at seeing daylight.

“Comprehensive reform really requires it to be the number-one issue, right out of the box,” said Ron Pollack, who formerly served as executive director of the health advocacy organization Families USA and worked closely with the Obama administration on the passage of the ACA.

During the enactment of both the ACA and the Medicare and Medicaid programs, Democrats had the White House and substantial majorities in both houses of Congress, such that they couldn’t be thwarted by the filibuster — an unlikely situation in 2021, Pollack said.

According to a Morning Consult/Politico survey, 63 percent of Democratic voters felt it would be very important for the candidates to discuss the ACA in the second round of debates, putting it just behind the treatment of child migrants detained at the border and climate change as the top issues the party’s electorate think should be addressed. The poll, which surveyed 1,994 registered voters from July 25-27, has a margin of error of 2 percentage points. 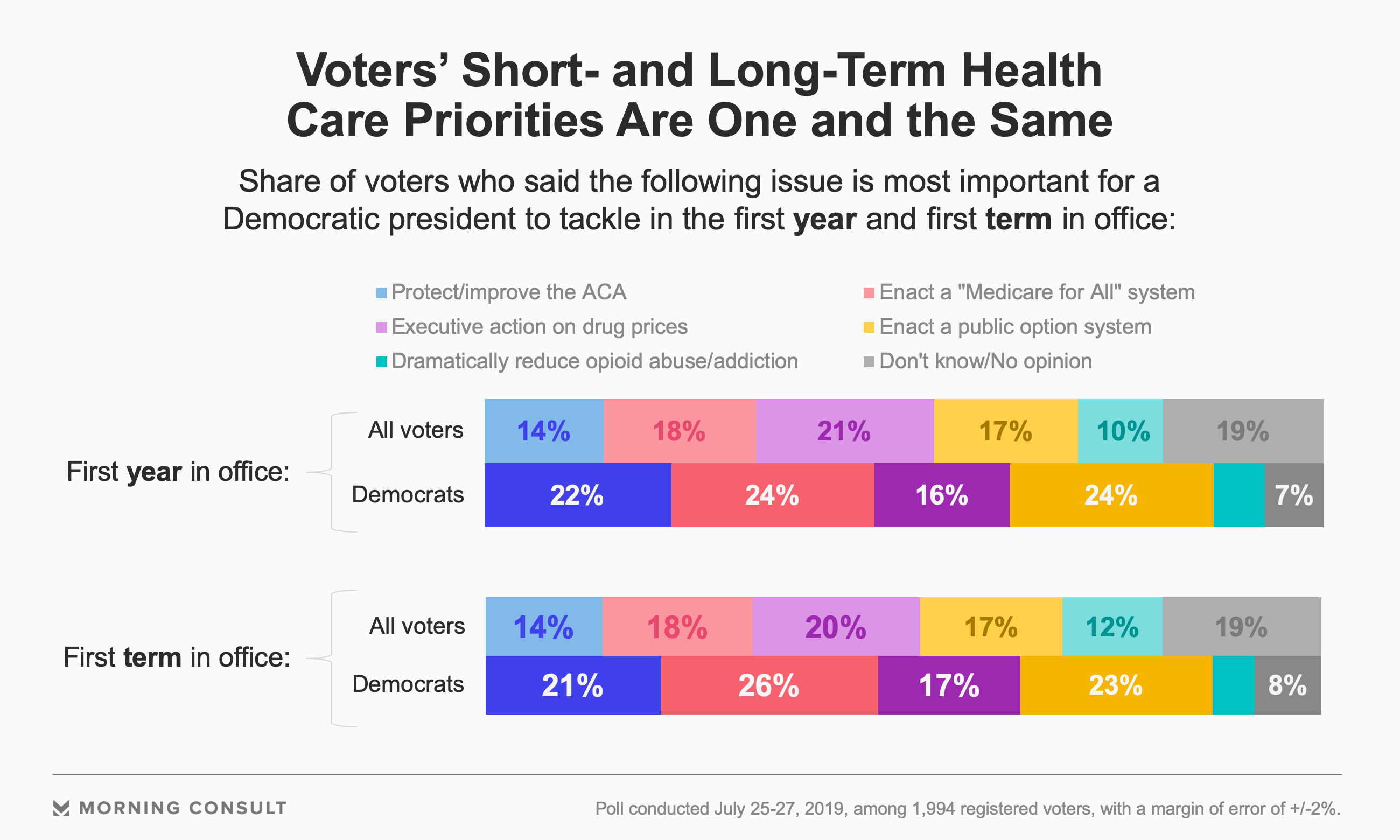 While the primary gives candidates an opportunity to hash out the differentiating elements of their proposals, experts worry the framing of the debate is unlikely to resonate with voters, as it has downplayed not only how concerned people are for the ACA’s survival, but how heavy a lift any proposed health reform will demand.

According to Jonathan Gruber, an economist at MIT and an architect of the ACA, the 2010 health law was such a significant piece of legislation that “it sucked all the oxygen out of the room.” It simultaneously delivered Democrats a policy win and a political loss, he said, and the combination of subdued enthusiasm, less urgency and skepticism that any reform will survive a GOP-led Senate has left Democrats feeling burned on the issue of health care.

During the first debate, Harris said passing a middle-class and working-families tax cut would be the first issue during her presidency, while Sanders stressed the need for a political revolution and taking on special interest groups.

Former Vice President Joe Biden, who said his first priority is defeating President Donald Trump, has opted for a plan that would build on the ACA and offer a public plan for people who choose to abandon private coverage. Pollack and Gruber speculated while Biden’s proposal could fare better in Congress than Medicare for All, it would hardly be insulated from well-funded industry opposition, underscoring the need for a president unwilling to leave health reform on the periphery.

The Harris, Sanders and Biden campaigns did not respond to request for comment.

Related: On Controlling Health Costs, Most Voters Trust … No One

Among voters, short- vs. long-term health care priorities are the same, according to the poll. Democrats are largely split between wanting a president’s first year in office to focus on protecting the ACA; enacting a Medicare for All system; enacting a public option; and taking executive action to reduce drug prices. The same holds true when asked about the president’s priorities during their first term.

But the Democratic electorate is listening keenly for presidential hopefuls to delve into health care, with a plurality of voters saying health care matters are the top set of issues they want the contenders to address — illuminating the need for candidates to address priorities across the board rather than putting all their eggs in one basket.

Considering the challenge of wholesale change, Pollack said Democrats may be better served focusing on incremental solutions, such as lowering drug prices. But even that is no simple task; on drug costs, an incoming president would face the pharmaceutical lobby, arguably the most powerful lobby on Capitol Hill and certainly within health care.

Eliot Fishman, the senior director of health policy at Families USA, said that while health care has been a dominant flashpoint in Democratic primaries dating back to the Clinton administration, issues such as climate and immigration have overtaken the narrative. If Democrats have unified control over government come 2021, they will be tasked with making generational choices.

“As much as we have serious health care problems in the country that ought to be a major priority, I certainly don’t think it’s a foregone conclusion that health care is going to be number one,” Fishman said.

A series of incremental improvements would still require the next administration to act fast on health care, according to Pollack, without demanding the same unilateral focus as proposals like Medicare for All. But candidates advocating sweeping reform may already be so “bought into such a big change, that it may sound like they’re compromising their position by talking about incremental.”

“This has to be as a priority,” Gruber said. “They got a lot of things they want to get done. And whether they want to spend political capital on health care is unclear.”