About a quarter of them say they trust Vermont senator the most to understand, fix the problems with U.S. system

As Bernie Sanders struggles to narrow the double-digit gap separating him from Joe Biden in the race for the Democratic presidential nomination, the Vermont senator currently leads the former vice president when it comes to one of the top issues for the party’s primary voters: health care.

After nearly an hour of airtime spanning both nights of the second round of debates was dedicated to discussing the future of the U.S. health care system, roughly a quarter of potential Democratic primary voters say they believe Sanders not only has the best understanding of the problems with the system, but is also best equipped to solve them, according to a new Morning Consult/Politico survey. 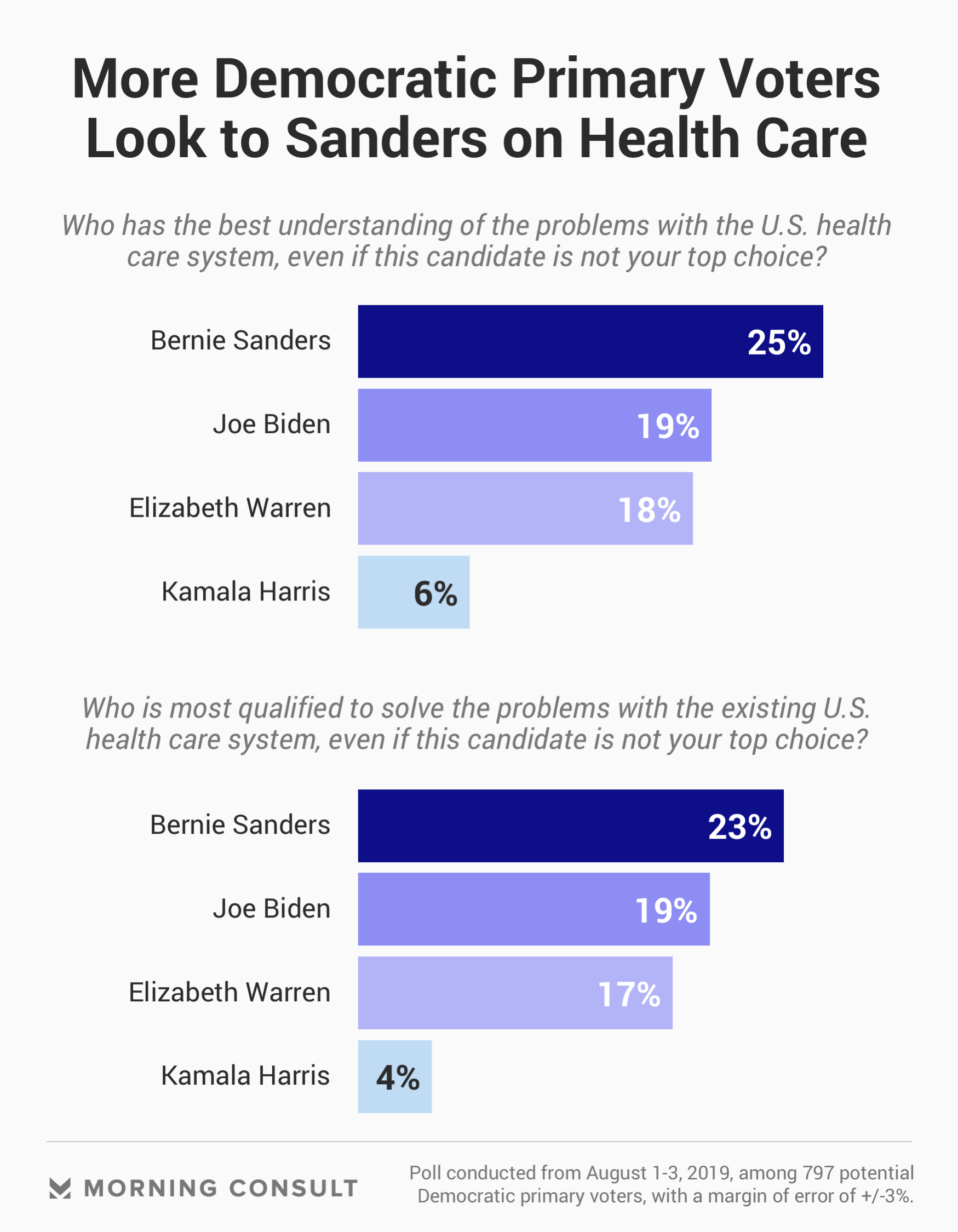 Biden trails Sanders on both fronts, winning the confidence of 19 percent of these voters — statistically equal to the 18 percent share who put their trust in Sen. Elizabeth Warren of Massachusetts — to understand their health care concerns. The Aug. 1-3 poll of 797 potential Democratic primary voters, which has a margin of error of 3 percentage points, found the remaining 17 candidates who qualified for the debates earned between zero and 6 percent of the vote share.

Biden and Sanders, who are running with health reform plans at opposite ends of the Democratic spectrum, represent the broader, party-wide fracture on the best pathway to attain universal coverage. Biden’s plan, billed as an alternative to Sanders’ single-payer approach, proposes bolstering the Affordable Care Act and enacting a public option system for those who choose to abandon their employer-sponsored plan.

Sanders, Warren and Biden were all featured prominently at the onset of the debates. On the first night, Sanders and Warren teamed up against the lesser-known candidates who cautioned against the elimination of private insurers, and on the second night, Biden and Sen. Kamala Harris of California, who had introduced her own plan for universal coverage just days before the debate, sparred over the tradeoffs and costs of their competing plans.

Harris and Sen. Michael Bennet of Colorado were among the many presidential hopefuls who sought to persuade primary voters they are the best person to take on the task of restructuring the health system, but to little avail, as the Morning Consult poll showed.

Americans have responded favorably to more moderate proposals like the public option — with 62 percent backing such a system in a March poll — as pressure mounts on “Medicare for All” advocates to defend their plan, but the most recent survey suggests that Sanders’ decades-long efforts to illuminate the inefficiencies in health care and offer a single-payer system as a remedy have resonated with the Democratic electorate.

Related: The Democratic Health Care Debate Is Intensifying. But Is Reform a Top Priority?

In one of the more memorable exchanges in Detroit last week, Rep. Tim Ryan of Ohio questioned whether Sanders could know whether Medicare for All would cover all health care needs, especially for senior citizens, to which Sanders retorted: “I do know it. I wrote the damn bill.”

Voters’ confidence in Warren, who is behind Biden and Sanders in potential Democratic primary voters’ preferences, is also noteworthy, especially given that health care is the largest top-of-mind concern for these voters (at 26 percent) as they consider their choices in their state’s Democratic primary or caucus. While the Massachusetts senator has yet to release a health reform proposal of her own, she aligned herself closely with Sanders’ Medicare for All plan during the first round of debates in June and has remained firmly planted at his side on the issue ever since.

When the 538 voters who watched at least one night of the debates were asked about the topics, 38 percent said Medicare for All was discussed “too much.” The only other topic that more people thought the candidates talked about “too much” was President Donald Trump.

By contrast, 35 percent of viewers believed the Affordable Care Act — one of the top issues for voters in a pre-debate survey — was not featured prominently enough.

However, the lengthy discourse on the merits and drawbacks of different health care proposals may not have been in vain. A majority of viewers said they were either somewhat more informed (40 percent) or much more informed (13 percent) about what a Medicare for All system would look like following the debates.