Demonstrators outside of the Dayton City Hall protest a planned visit of President Donald Trump on August 6, 2019 in Dayton, Ohio. Trump was scheduled to visit the city on Wednesday as residents recover from Sunday morning's mass shooting in the Oregon District. Nine people were killed and another 27 injured when a gunman opened fire with a AR-15 style rifle in the popular entertainment district. (Scott Olson/Getty Images)
By Yusra Murad

In the aftermath of back-to-back mass shootings in El Paso, Texas, and Dayton, Ohio, President Donald Trump called the perpetrators of the violence “mentally ill monsters,” arguing that “mental illness and hatred pull the trigger, not the gun” — comments that immediately drew warnings from the medical community that associating mass shootings with mental health is misguided and further stigmatizes an already vulnerable population.

According to a new Morning Consult/Politico poll of 1,960 registered voters, 48 percent of voters are in agreement with Trump, placing “a lot” of blame on mental illness for mass shootings, while another 35 percent place “some.” The poll has a 2-point margin of error.

While the share of voters who blamed mental illness “a lot” is down from 54 percent in a survey taken one year earlier, the share who said mental illness plays “some” role grew from 28 percent, indicating a significant majority of the electorate still sees a strong correlation between mental health and mass shootings. In the year between the two polls, the United States experienced 362 mass shootings — almost one for every day. 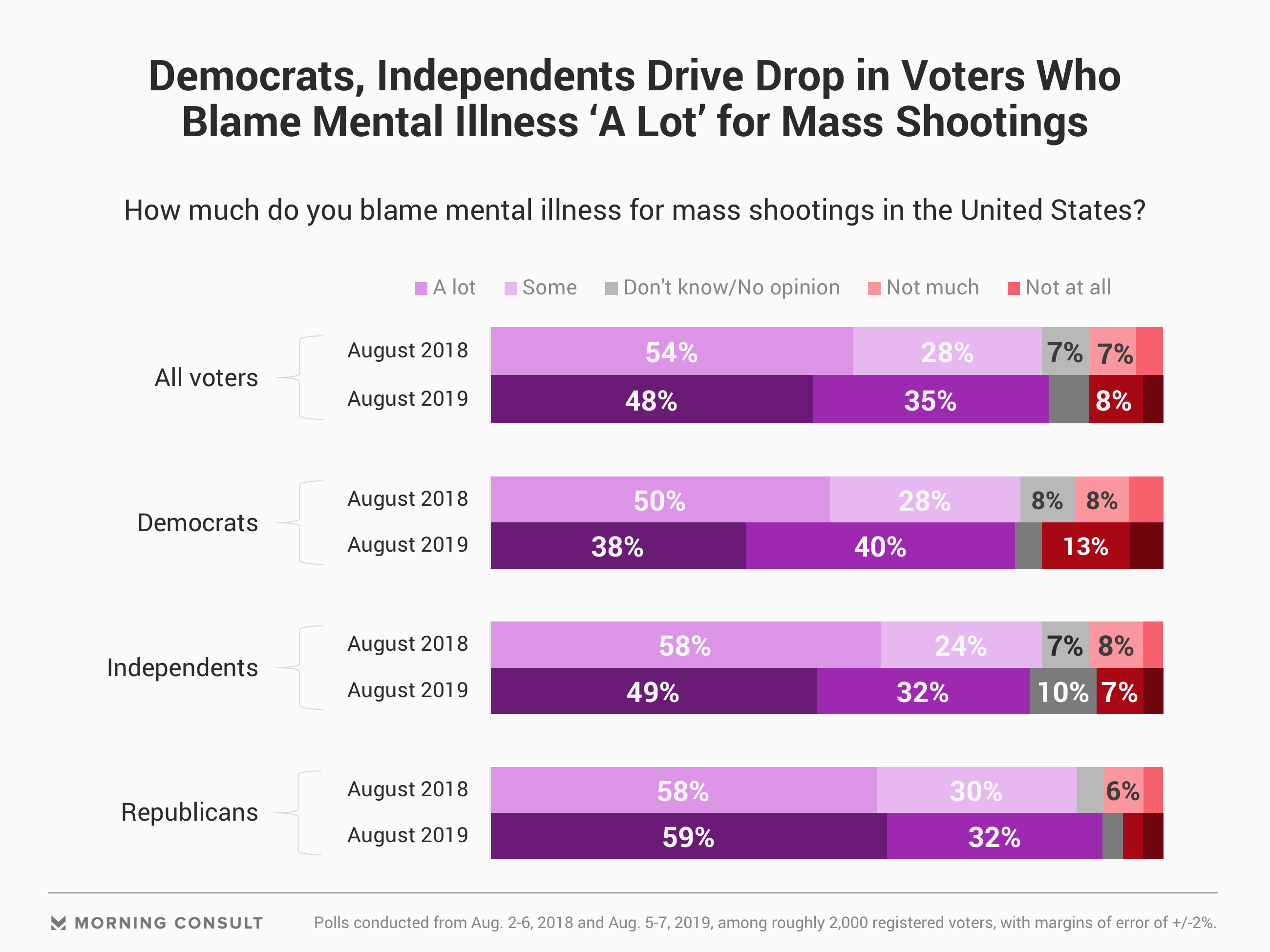 But among the GOP electorate, just as in August 2018, roughly 3 in 5 Republicans place “a lot” of blame on mental illness for mass shootings — making it the No. 1 factor Republicans believe drive mass shootings.

“This is a repeated message that is being put out there,” said Bandy Lee, a Yale University psychiatrist and specialist in violence prevention programs. “When a president says it, it has far-reaching cultural consequences.”

The American Psychiatric Association was quick to rebuke politicians who attempted to draw the link between mental illness and gun violence, citing the body of evidence finding the majority of people with mental illness are not only nonviolent, but more likely to be victims of violent crime rather than perpetrators.

Violence is best understood as a societal disorder, and social, cultural, economic and environmental factors are greater predictors of violence than individual factors, Lee said. She pointed out that even as Trump calls for mental health reform to extend treatment to at-risk individuals, his administration has made myriad decisions that have adversely impacted people with mental illness, such as moving to strike down the Affordable Care Act, which improved access to mental health treatment across the country.

The most recent survey found that when it comes to mass shootings, 47 percent of voters place “a lot” of blame on lack of access to mental health treatment, short of the majorities who said the same of racism, sexism and homophobia, easy access to guns and illegal gun dealers.

“In the U.S., it is easier to get a gun than it is to get mental health care,” said Angela Kimball, the chief executive officer of the National Alliance on Mental Illness.

“Dehumanizing a group of people can make them a target of deadly violence,” Lee said. “He’s being dangerous to mentally ill individuals, and coming from the president it will have far greater influence than anyone else. This is one of the gravest risks to public safety: He is not only misleading the public, but also targeting a group.”