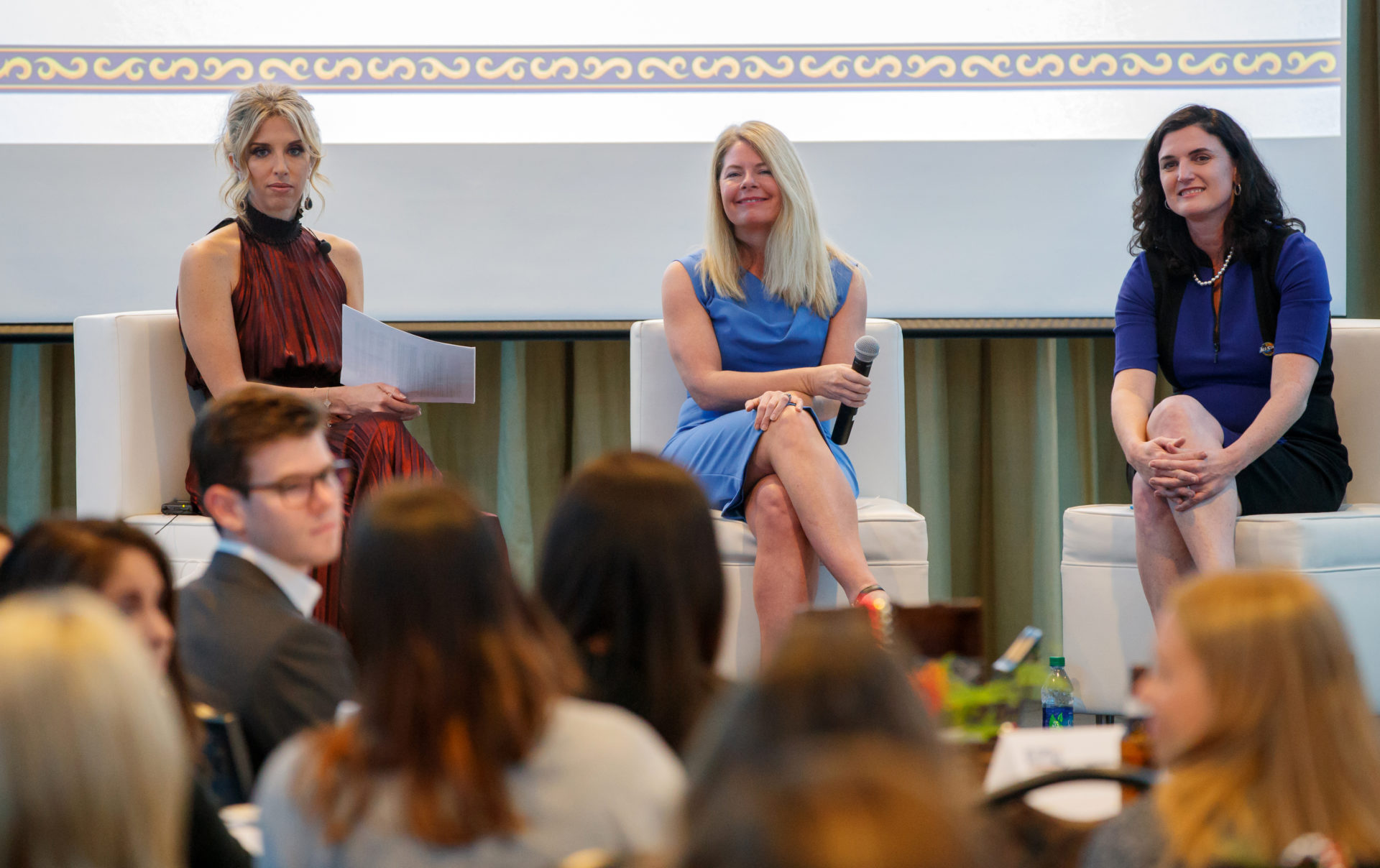 NHL VP and CMO Heidi Browning, center, participates in a moderated discussion at Beyond the Blue Line - Celebrating Women of Influence at Tampa Bay History Center in January 2018 in Tampa. Browning is one of three U.S. league CMOs who comes from a non-sports background. (Mike Carlson/NHLI)
By Mark J. Burns

Later this month, Kate Jhaveri will begin her first day as the NBA’s chief marketing officer following a two-year stint at Amazon.com Inc.-owned Twitch, along with prior stops at Facebook Inc. and Twitter Inc. — in other words, a total sports outsider.

That the NBA would choose a tech-savvy CMO without full-time sports experience isn’t surprising given the league’s efforts as a digital pioneer. Teams across the major U.S. pro sports leagues, however, have been slower to embrace nontraditional career paths for a C-level digital marketer.

Yet the status quo is changing, according to Liz Moulton, co-leader of the Sports Business Practice at executive search and consulting firm Spencer Stuart. Eventually sports marketers with nontraditional pedigrees will become the norm, Moulton said, as they “steadily” enter the industry from blue-chip brands, the hospitality sector and Silicon Valley, among other backgrounds.

“Anyone whose job it is to get eyeballs on their product or platform all of the time” could be an ideal candidate as a chief marketer, Moulton said, citing Hulu, Netflix Inc., Snap Inc. and Facebook as some of the companies mentioned by sports clients around a search.

It’s now standard, Moulton said, for team owners and senior executives to home in on talent from innovative brands that are well-versed in utilizing technology to help drive consumer behavior and reach core customers and new ones via digital. Executives who have experience “generating enthusiasm and brand excitement through technology” are almost exclusively what owners want in a head of marketing, she said.

For years, the sports industry has been formulaic in its hiring and promotion of talent: A sports management undergraduate degree coupled with a decade or two of experience and a handful of team and league stops traditionally yielded a rise up the corporate ladder to an eventual C-suite seat. But today, the chief marketers from three of the five major U.S. professional sports leagues — including the NFL, NBA and NHL — hail from outside of sports. And the NBA’s former chief marketing officer, Pam El, came from Columbus, Ohio-based Nationwide Mutual Insurance Co.

He said that if one looks at the league hires and who their target audiences were at their respective companies, then it’s clear why they were a leading candidate for each property. NFL Chief Marketing Officer Tim Ellis, who was hired in 2018 from video game company Activision Blizzard Inc., is one example of this strategy, Santore said.

The median age of an NFL fan is 50, compared to 57 for MLB and 42 for the NBA, according to a 2017 Magna Global study commissioned by Sports Business Journal. Attracting a younger audience and grabbing eyeballs for extended stretches of time has become increasingly difficult in a world full of choice. There’s also been a well-documented shift in how fans buy merchandise, where and when they choose to consume content and how they want to experience a standard sporting event.

Related: For Digital Sports Media, the Goal Is Getting Their Audience to Wear Them

Heidi Browning, the NHL’s CMO, spent five-plus years at music streaming service Pandora Media LLC before transitioning to the league in 2016. Coming from that background, she said she had minimal preconceived biases about the league or sport and could offer her unfiltered opinions on where to take the league. Browning said part of her role was understanding Generation Z behaviors, how that impacted their musical preferences and which platforms they used to consume media.

When Moulton spoke with Commissioner Gary Bettman prior to conducting the search for the role, she said he was specifically focused on attracting fans to consume more hockey content — whether it was in-venue, through linear, digital or other mediums — both at the league and team levels.

At Pandora, how the company made business decisions and executed marketing strategies came through the lens of the listeners, Browning said. With the NHL, it’s no different, except it’s through the fans’ perspectives.

“Leaning into the next generation of fans, Gen Z and millennials, how they interact with you, their attitudes around sports, media, culture and technology and how you bring those things together to ensure we’re building a brand for the next 100 years and building a sport and experience that’s going to be as attractive to Gen Z as it is to our current fans,” Browning said of her chief focuses.

Both Santore and Moulton highlighted that the marketing shift isn’t just occurring at the league level, though, but at individual clubs, with executives making lateral moves from hospitality, consumer technology, blue-chip brands and the casino industry.

The résumé for Los Angeles Rams CMO Ronalee Zarate-Bayani — a search Moulton conducted in 2017 — includes stops at The Hershey Company, Visa Inc. and Taco Bell Corp., while Geraldine Calpin of The Madison Square Garden Company enjoyed a 16-year stint with Hilton Worldwide Holdings Inc., along with a brief detour to WeWork Cos., before her hire in November.

Moulton said that when she speaks to league-focused internship classes and student conferences, she recommends gaining experiences with blue-chip brands and then transitioning over to sports, especially if one aspires to work in the senior marketing ranks. An MBA from an elite university is also a more prominent component of candidates’ résumés who switch industries to sports.

“The preference now is for more of a diverse experience,” Moulton said.