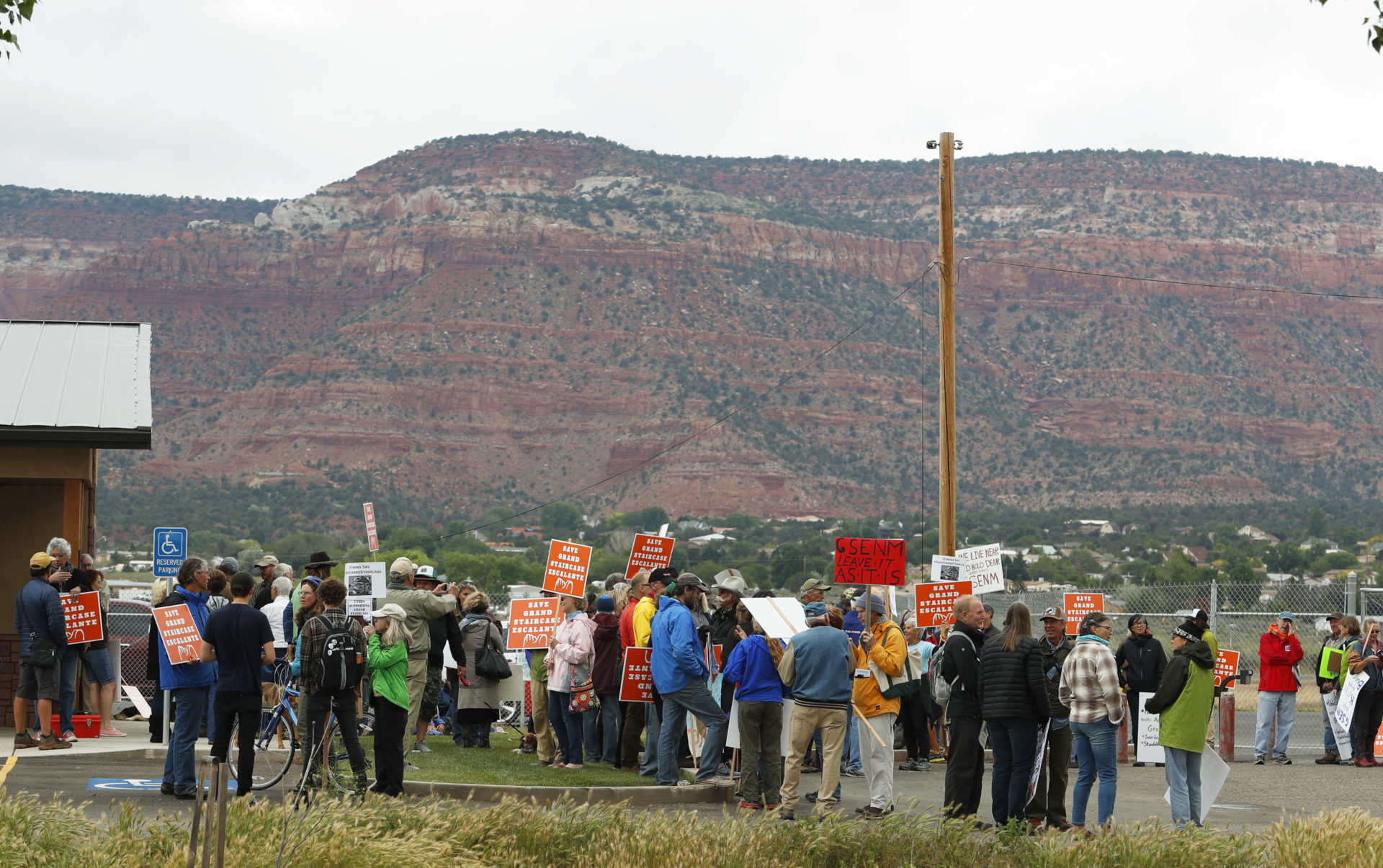 Protestors wait at the Kanab Airport in Utah to protest U.S. Secretary of the Interior Ryan Zinke on May 10, 2017. Despite protests from a variety of environmental groups and local citizens and lawmakers, the Trump administration decided in December 2017 to shrink the size of Bears Ears National Monument and Grand Staircase-Escalante National Monument. (George Frey/Getty Images)
By Jacqueline Toth

In March 2017, President Donald Trump signed his 19th executive order, directing federal agencies to peruse their rulebooks for burdens on energy development and rectify them. The order called on the Interior Department to lift an existing ban on new coal leasing on federal lands and review specific rules related to emissions from fossil fuel development in those areas.

In doing so, the administration ostensibly helped raise the profile of Interior by moving to expand energy leasing and production and loosening Obama-era requirements on curbing methane emissions from fossil fuel production on public lands — steps that conservation groups have criticized for benefiting drillers at others’ expense.

Enter the Democratic presidential candidates for 2020, who have taken note. With climate change an especially hot topic this campaign season, public lands issues have been elevated, seen as a natural fit in the climate discourse.

The current administration’s actions have “turned public lands into much more of a top-tier issue than they might have been otherwise,” said Aaron Weiss, deputy director of the Center for Western Priorities advocacy group. That so much of U.S. oil and gas comes from public lands means any comprehensive energy strategy going forward needs to consider those areas, Weiss said.

“The American people are ready to have a meaningful and honest conversation about climate, and public lands should be an important part of that,” said Chase Huntley, energy and climate director for The Wilderness Society Action Fund.

Interior did not respond to a request for comment by press time.

Multiple Democratic candidates for president have specifically highlighted public lands as a climate issue and have taken positions diametrically opposed to the Trump administration’s development focus.

Sen. Elizabeth Warren (D-Mass.), who early in her candidacy set out a platform that includes a promise to end new on and offshore fossil fuel leasing on her first day in office, framed public lands as a climate issue outright. “Any serious effort to address climate change must include public lands,” reads her platform, announced on the blog site Medium.

A policy staffer on Warren’s campaign made clear that her campaign’s public lands policy positions constitute just one piece of a broader, comprehensive platform to address climate change. “We think of it as going piece by piece through the primary producers” of U.S. fossil fuel-related emissions and determining how to reduce them, the staffer said.

Former Rep. Beto O’Rourke’s (D-Texas) campaign said in an email that “our public lands should not be contributing to the climate crisis when they could play a role in combating it.”

The campaigns of former Vice President Joe Biden, Sen. Michael Bennet (D-Colo.) and Sen. Bernie Sanders (I-Vt.) did not respond to emailed requests for comment on their presidential platforms, which have all touched on public lands.

Public and federal lands do play a role in the climate puzzle. They are home to many protected forests and ecosystems that help store millions of metric tons of carbon dioxide. But fossil fuel drilling and combustion on federal lands is also the source of almost 24 percent of U.S. carbon emissions, on average, and 40 percent of U.S. coal production comes from federal lands each year. And the Wilderness Society has estimated that the lifecycle emissions of on- and offshore leases issued under Trump could release from 854 million to more than 4.7 billion metric tons of carbon dioxide equivalent.

When it comes to confronting climate change and protecting public resources, public lands “can be viewed as a ground zero,” not just in reversing existing degradation but in “using public lands as a sink for carbon” and making sure they are accessible, protected and contributing to the development of a clean energy economy, said Sam Ricketts, climate director on Washington Gov. Jay Inslee’s presidential campaign.

One possible appeal of having a public lands pillar to the climate platform may be that emissions from federal lands — both on land and off the coast — are something an incoming president could address early and boldly, offering a victory on climate when other actions may be too politically fraught to implement, such as pressing Congress to enact a carbon price.

Warren, if president, would be “very willing” to use executive authority to restore the original sizes of monuments Trump has shrunk and place a moratorium on new fossil fuel leases on and offshore, according to her policy staffer. And Ricketts said Inslee would use executive power to reverse Trump’s regulatory rollbacks at Interior.

Taking positions counter to the Trump administration’s could benefit the presidential candidates as they try to appeal to a wide swath of the West, where protection of public lands is viewed as critical.

In a June 2018 poll of 2,500 likely voters in five Western states performed by Gottlieb Strategic Research for the Center for Western Priorities, 88 percent of Democrats said they disapproved of the administration’s job on public lands. And so did 61 percent of independents.

“Advocates and then campaigns have recognized this is a strong platform to stake out when it comes to essentially what is the climate battleground,” Ricketts said. “Public lands are something that, across partisan lines, people roundly want to protect.”

Meanwhile, in Colorado College’s annual “Conservation in the West” survey, which polled 3,204 total voters across eight Mountain West states from Jan. 2-9, 2019, 63 percent of voters said that the ability to live near and enjoy public lands factors at least somewhat into why they live in the West. At the same time, 46 percent said that climate change is an extremely or very serious problem in their state.

Ensuring fair value for taxpayers on public lands and helping to transition fossil fuel workers into new jobs are policy positions that could also play well outside of the Democratic base.

The Warren policy staffer said the positions that the Massachusetts senator has taken on public lands, such as preventing the sale of government lands to private entities, “resonates with a lot of different communities,” including ones that might not otherwise be expected supporters of her campaign.