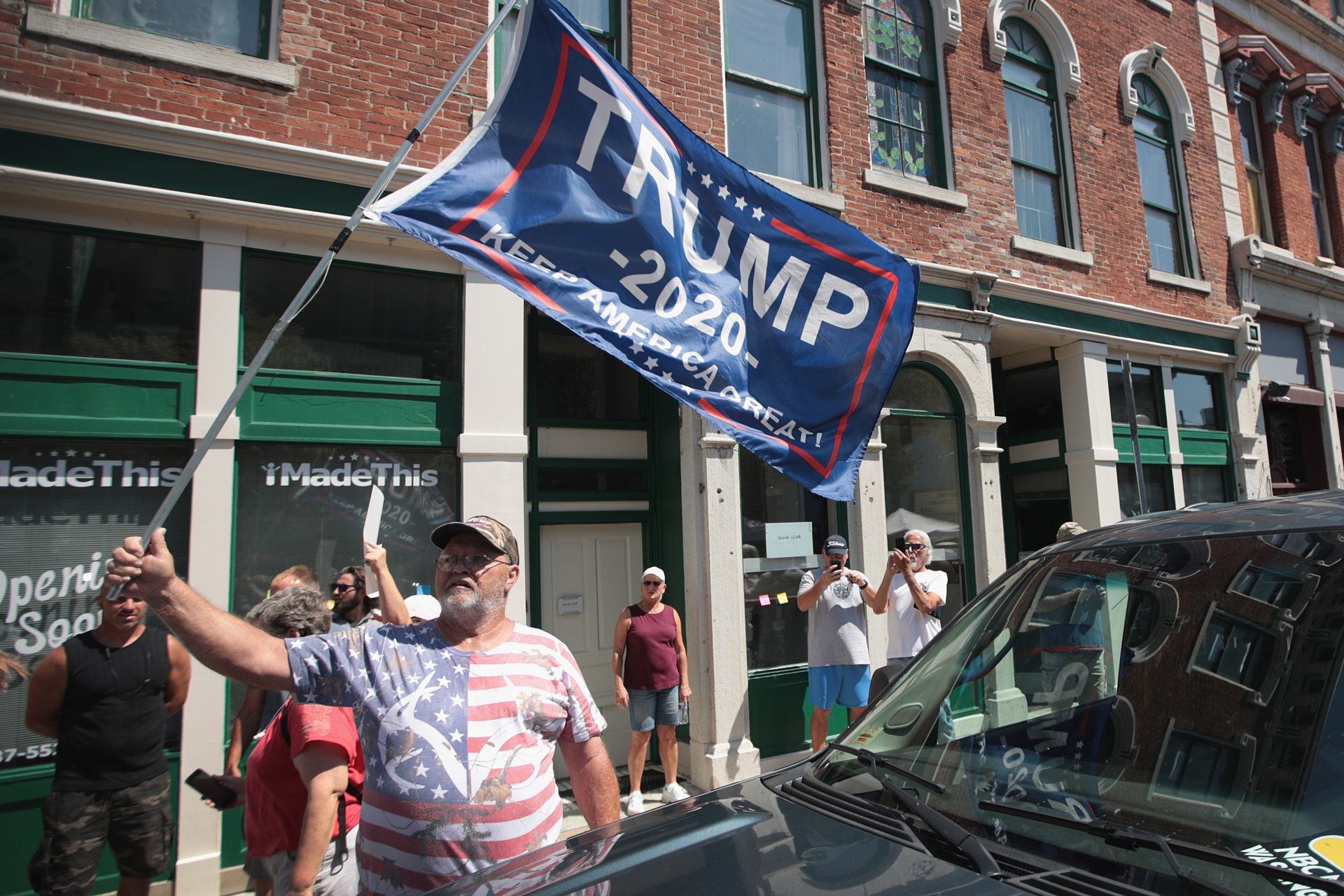 A supporter of President Donald Trump waves a flag during the president's Aug. 7 visit to Dayton, Ohio, days after a mass shooting left nine dead and 27 wounded. A new poll shows support for gun control among Republican voters has waned. (Scott Olson/Getty Images)
By Eli Yokley

Support among Republican voters for stricter gun control laws has increased since President Donald Trump’s inauguration, but polling suggests that tide has ebbed, casting doubt on the prospect that Congress may pass meaningful gun reform when it returns next month.

A new Morning Consult/Politico poll conducted roughly a week after the deadly mass shootings in El Paso, Texas, and Dayton, Ohio, found GOP voters are split, 47 percent in support and 45 percent in opposition, on the question.

That’s down from the first survey conducted after the February 2018 shooting at Marjory Stoneman Douglas High School, when 53 percent supported stricter gun measures versus 42 percent opposed, and down even more from another post-Parkland survey that found 57 percent of Republicans — a Morning Consult record — backing enhanced gun control. 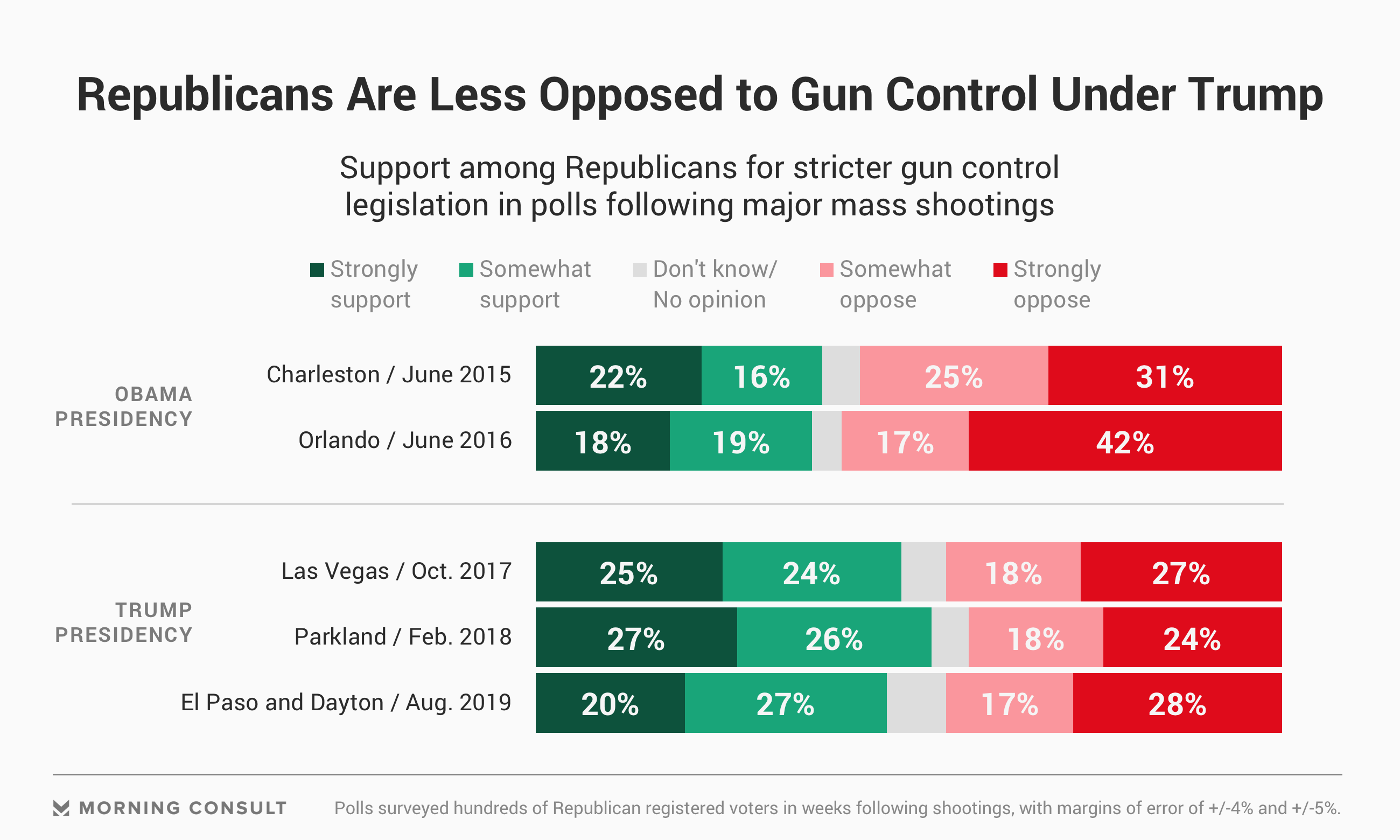 What’s more, the latest survey found that Republicans who oppose stricter gun measures are more energized than those who support it: Twenty-eight percent say they are “strongly” opposed, up 5 percentage points from the post-Parkland high, compared to 20 percent who said they “strongly support” such measures, down 5 points.

Among all voters, 2 in 3 support stricter gun control legislation, including 89 percent of Democrats and 60 percent of independents. All voters are also nearly three times as likely to strongly support such measures as they are to strongly oppose them.

Doug Heye, a former Republican National Committee spokesman, said GOP opponents of stricter gun control laws represent the party’s base — the people who reliably vote for Republican candidates and are loyal to Trump.

“So unless Trump weighs and leans in on a deal, telling his base, ‘You know I wouldn’t take your guns,’ it’s hard to see that dynamic changing,” he said in an email.

The president has lent that weight to passing stricter background check legislation, and Senate Majority Leader Mitch McConnell (R-Ky.) told a local radio station last week that the policy — along with so-called “red flag” laws — would be “front and center” when the Senate returns next month.

Polling conducted before and during Trump’s presidency found Republicans are more open to stricter gun control legislation than they were during his Democratic predecessor’s second term.

According to a June 2016 Morning Consult poll conducted after the mass shooting at the Pulse nightclub in Orlando, Fla. — when Republicans controlled the House and Senate but a Democrat held the White House — nearly 3 in 5 GOP voters opposed stricter gun control legislation, while 37 percent supported it. (The figures were similar in June 2015, after the mass shooting at a church in Charleston, S.C.)

Michael Steel, who was an adviser and top spokesman to former House Speaker John Boehner (R-Ohio), said the post-Obama increase in support among Republican voters for stricter gun control laws reflects not just Trump’s weight on the party’s voters with comments in favor of some restrictions, such as stricter background checks and a ban on bump stocks, but also the “cumulative impact to these tragic shootings.”

That effect, he said, coupled with the diminished strength of groups that oppose gun control legislation and the salience of Trump’s endorsement with the party’s voters, gives Republicans an opening, as long as the president puts his finger on the scales.

“If the president is willing to pick a series of changes that he believes will be limited and effective in terms of gun safety, and advocates for them consistently, you can see Republicans support them,” Steel said. “Support for individual, specific and effective measures is going to be higher than a philosophical question of, do you support gun control.”

Indeed, a Morning Consult/Politico poll conducted last week found Republicans are supportive of particular pieces of gun control legislation. Nine in 10 Republicans back stricter background check legislation, and roughly 3 in 4 back policies such as requiring a person to be 21 in order to purchase a gun and a mandatory 72-hour waiting period after a gun is purchased before it can be taken home.

Even a ban on assault-style weapons is supported by over half of Republican voters, including 37 percent who strongly support it.