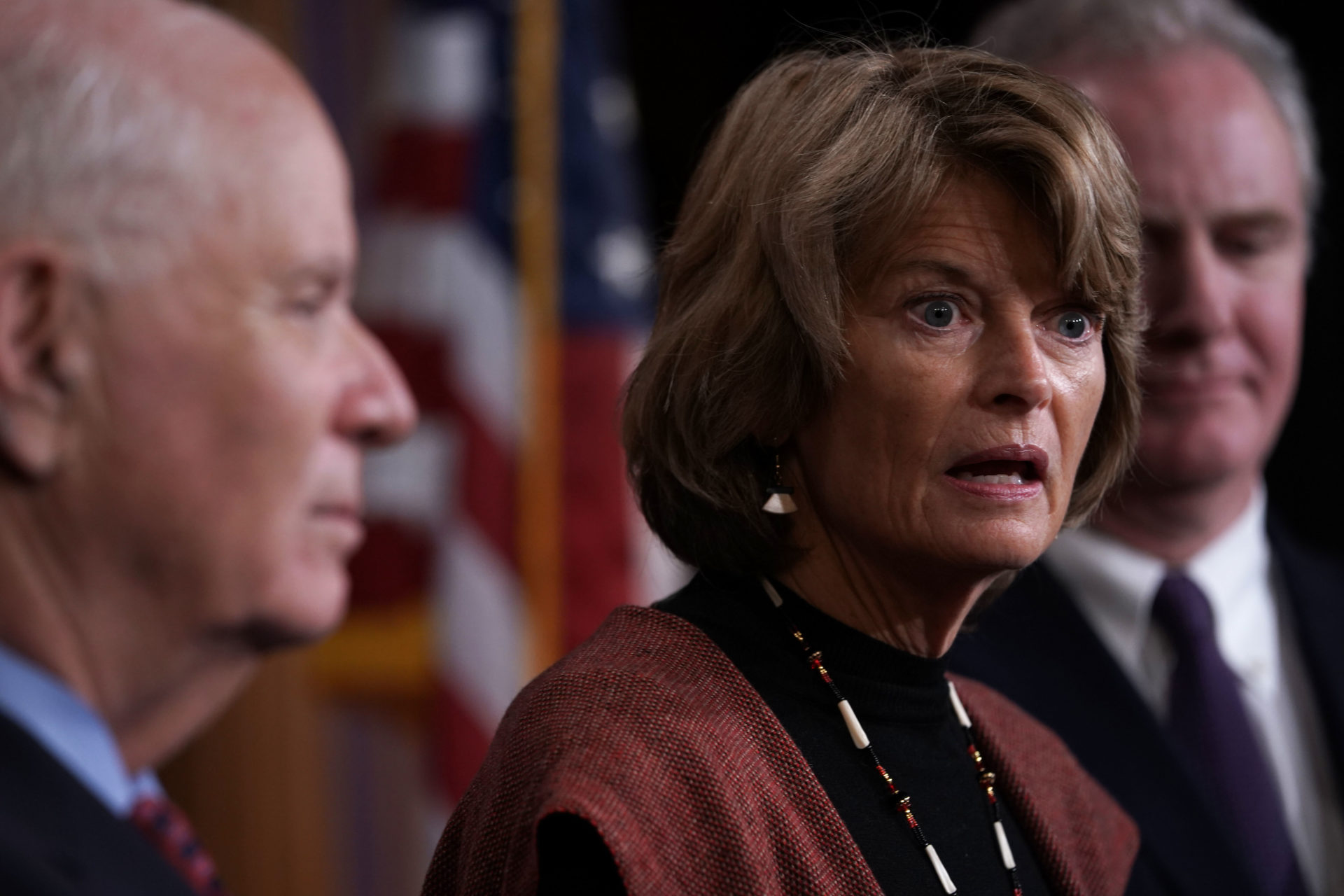 Sen. Lisa Murkowski (R-Alaska) speaks during a news conference at the U.S. Capitol on Jan. 24, 2019, in Washington, D.C. Murkowski is introducing a legislative discussion draft that seeks to leverage financing for global energy projects. (Alex Wong/Getty Images)
By Jacqueline Toth

An official legislative discussion draft of the Strategic Energy for America Act will be released today, according to a committee spokesperson, which would leverage the U.S. Export-Import Bank and the U.S. International Development Finance Corporation to let American companies better compete for international energy projects.

“It’s a recognition that when it comes to making strategic energy decisions and investments overseas, it really is about money,” the spokesperson said, noting smaller steps such as sending delegations to workshops and signing bilateral memoranda of understanding are not enough.

State-sponsored behemoths such as China, but also allies like South Korea and Germany, are able to direct significant trade finance for strategic energy projects internationally, and the bill seeks to free existing U.S. institutions to make large-scale energy investments abroad.

Under the draft, the Ex-Im Bank would be reauthorized through fiscal 2031 and directed to create a strategic energy portfolio specifically focused on export financing for civil nuclear energy and natural gas infrastructure projects that benefit U.S. exports of energy and related technology. The energy portfolio would be capped at $50 billion in total outstanding loans, guarantees and insurance at any given time.

Release of the bill text follows last month’s publication of a short white paper, which lays out an intellectual foundation for the initiative and names natural gas and civil nuclear projects as examples requiring long-term relationships and finance to develop — investments that the spokesperson said are expensive, long-term and game-changing endeavors.

Additionally, any defaults on financing under the new portfolio would not count toward the bank’s statutory 2 percent default rate, the threshold at which Ex-Im is required to cease all activity.

That provision is a recognition that nuclear and liquefied natural gas projects will be riskier than some other Ex-Im projects, the spokesperson said. “We don’t want to hold the rest of the bank hostage to strategic investments.”

The bank could only finance civil nuclear projects in countries that have a section 123 agreement with the United States, which does not currently include Saudi Arabia.

Additionally, the SEA Act would allow the Development Finance Corporation to create a strategic energy portfolio that could include financing for any kind of energy project — including for nuclear generation projects, which are currently barred from receiving financing from the Overseas Private Investment Corporation that is soon folding into the DFC. Removing that prohibition is a key priority for the domestic nuclear energy community, which sees much of its potential market abroad.

The Treasury Department would also be called upon to oppose restrictions against any specific forms of energy, including upstream fossil fuel projects or generation from coal, at the World Bank or other multilateral development banks for development assistance to certain countries.

The SEA Act’s timely Ex-Im Bank provisions, which include extending its cap on outstanding financing from $135 billion to $200 billion, are being released ahead of discussions over the bank’s reauthorization; its current authorization expires next month. The draft’s proposed cap is more ambitious than a separate Senate measure that would reauthorize Ex-Im through fiscal 2029 at as much as $175 billion by that year.

Raising the exposure cap to $200 billion each fiscal year allows the $50 billion strategic energy portfolio to commence without Ex-Im having to divert financing from other projects, the spokesperson said.

Discussions over the draft have been primarily internal to date. The draft is not being introduced as a bill yet since recess is ongoing and because parts of the bill also fall under the jurisdiction of the Senate Banking and Foreign Relations committees, the spokesperson said, though discussions have not yet started with those panels.

The committee will set up a public inbox to take comments on the draft at SEA_Act@energy.senate.gov. The draft text will be posted to the committee website.