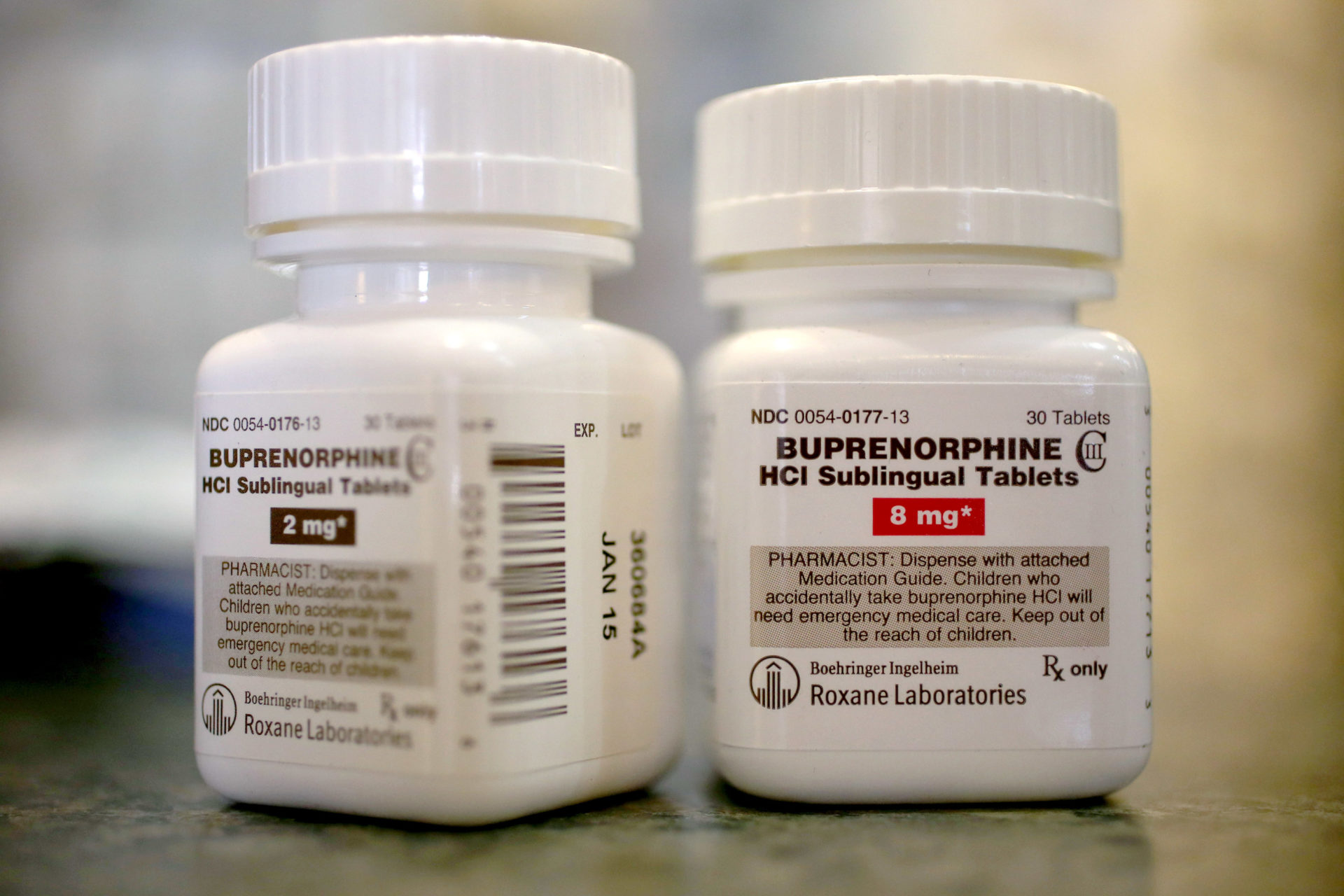 In this photo illustration, bottles of the generic prescription pain medication buprenorphine are seen in a pharmacy on February 4, 2014 in Boca Raton, Fla. (Joe Raedle/Getty Images)
By Yusra Murad

While access to affordable treatment for opioid addiction has improved substantially under the Affordable Care Act, states that have rejected Medicaid expansion have seen notably smaller gains in Medicaid-covered prescriptions for buprenorphine, according to new research.

One of three federally approved medications for relieving withdrawal symptoms of opioid use disorder, buprenorphine, often sold under the brand name Subutex, is an opioid product administered by injection, under the tongue, or as a skin patch or implant. Medicaid fronts the cost for buprenorphine maintenance treatment and buprenorphine-naloxone medication (Suboxone) nationwide, allowing states that have expanded Medicaid under the ACA to dramatically improve access to treatment for low-income populations amid the ongoing opioid epidemic.

The analysis from the left-leaning think tank Urban Institute, which used Medicaid State Drug Utilization Data to better understand how buprenorphine maintenance treatment prescriptions have changed over time and vary across states, found a significant increase in prescriptions nationwide, driven by states that have expanded Medicaid. 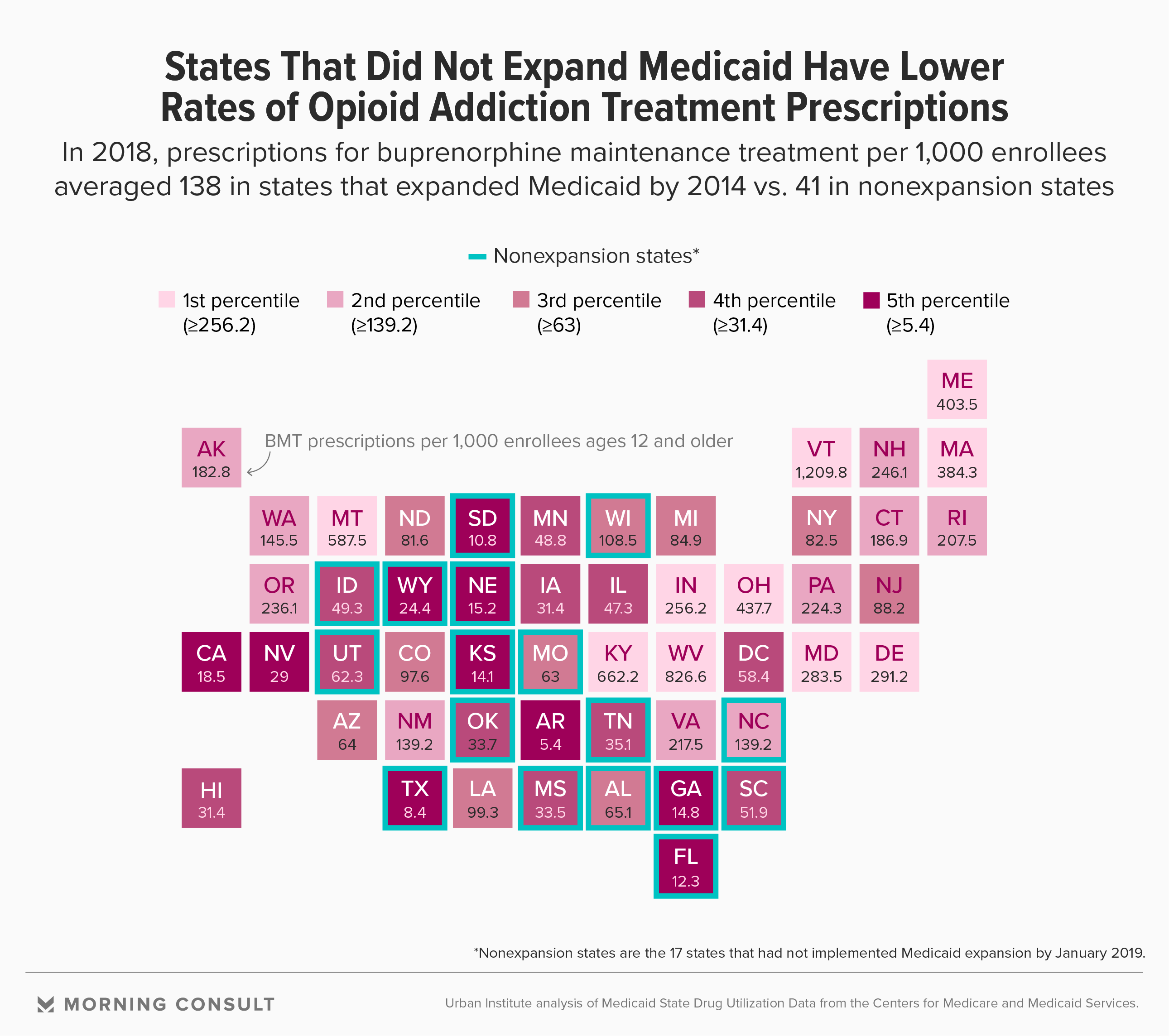 Of the 6.2 million prescriptions for buprenorphine maintenance treatment dispensed nationally in 2018, up from 1.3 million in 2011, the report found that more than three-fourths were filled in states that elected to expand Medicaid through the ACA or a waiver by April 2014.

In the 25 states (plus the District of Columbia) that implemented expansion by early 2014, the number of prescriptions filled or dispensed in pharmacies and providers’ offices annually surged, jumping from 1.2 million in 2013 to 4.8 million in 2018. By contrast, the 17 “nonexpansion” states — those that had not implemented Medicaid expansion by January 2019 — saw an increase of only 300,000 over the same time period (from 200,000 to 500,000).

The disparity between states was immense, with the rate of buprenorphine prescriptions per 1,000 Medicaid enrollees varying 200-fold across states.

Lisa Clemans-Cope, the lead author of the study, said that range was “jaw-dropping.”

“It’s unlikely that the differences in opioid use disorder rates account for this enormous variation in prescription rates,” she said. “The report is raising questions about whether a lot of these state Medicaid programs are falling short of meeting underlying treatment needs.”

Vermont had the highest prescription rate in 2018, with 1,210 prescriptions per 1,000 enrollees. Though that figure could reflect treatment needs exceeding the national average, the authors suggested two other important factors at play: clinically effective dosing and enhanced access to treatment.

In Vermont, patients receive 16 milligrams of the medication (taken as two tablets) — an evidence-based regimen that has been found more successful in treating opioid use disorder than lower doses. Vermont is the only state that offers treatment on-demand, Clemans-Cope said.

While variables including opioid use disorder prevalence, Medicaid restrictions on refills and prior authorization requirements vary by state, the noteworthy common denominator among the states with higher prescribing rates was their Medicaid expansion status.

Even though there is no silver bullet solution, expansion is a critical component in addressing the opioid epidemic, Clemans-Cope said, because it strengthens the entire system of treatment — not just for Medicaid enrollees. When people gain access to affordable treatment, growing demand for treatment spurs an increase in the number of providers to meet that need and obtain waivers to provide buprenorphine.

“In the states that did not expand Medicaid, not only do they have a population of people who need treatment, but the numbers of prescribers that are available to treat people is lower,” Clemans-Cope said.

Many of the states with low prescription rates had opioid-related death rates higher than the 2018 national average, such as Florida, Tennessee and South Carolina. Four of the five states in the lowest decile — Texas, South Dakota, Florida and Kansas — have not expanded Medicaid.