Ahead of 2020, Democratic Voters Are Moving Left on Immigration 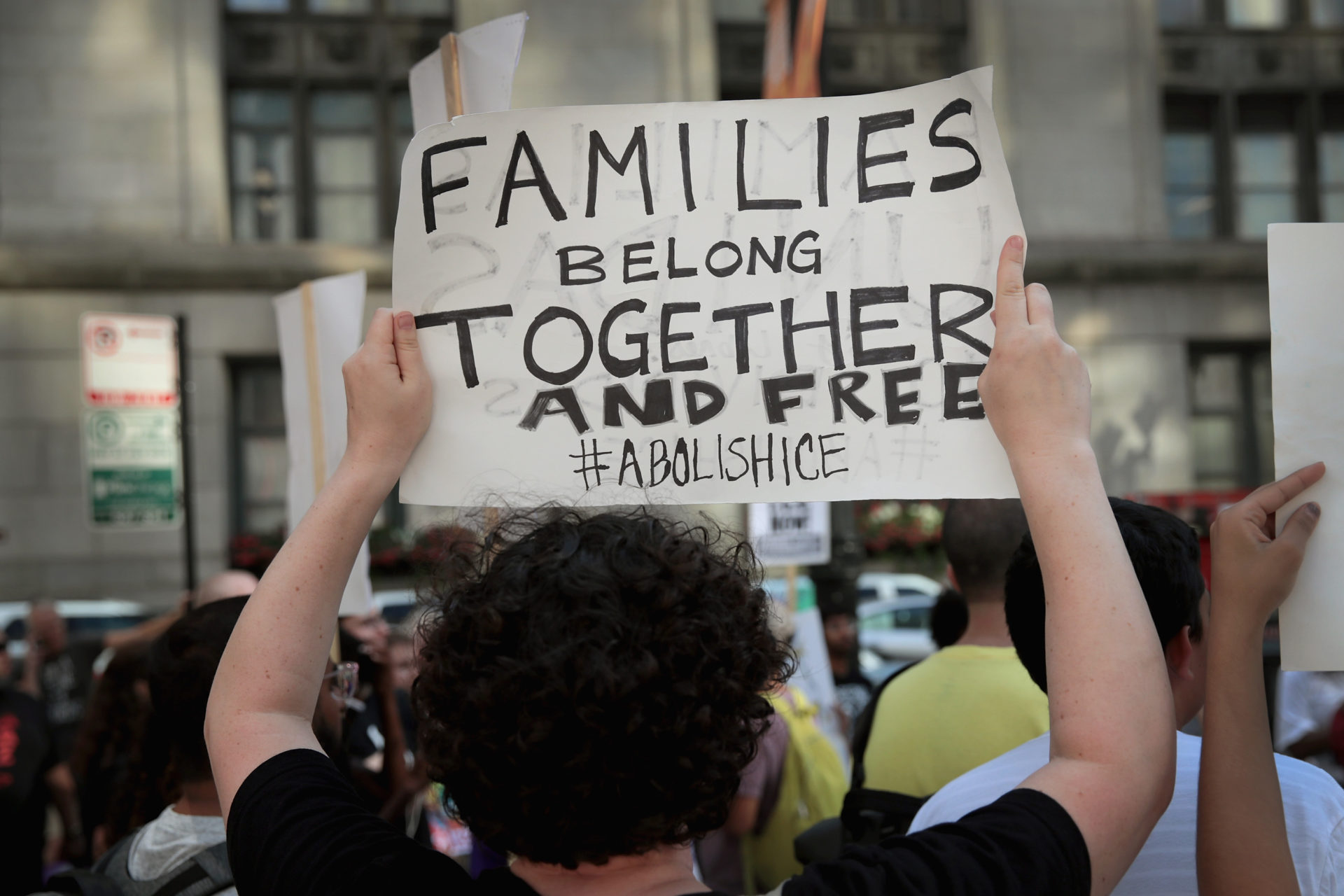 Demonstrators march through Chicago on Aug. 16 calling for the abolition of Immigration and Customs Enforcement. A new poll finds Democratic voters are increasingly likely to support candidates who want to abolish ICE. (Scott Olson/Getty Images)
By Eli Yokley

As the Democratic presidential primary moves closer to the first nominating contests, the party’s voters are growing more likely to prefer candidates with dovish positions on immigration, marching out of step with a lion’s share of the overall electorate that backs a harder-line approach. 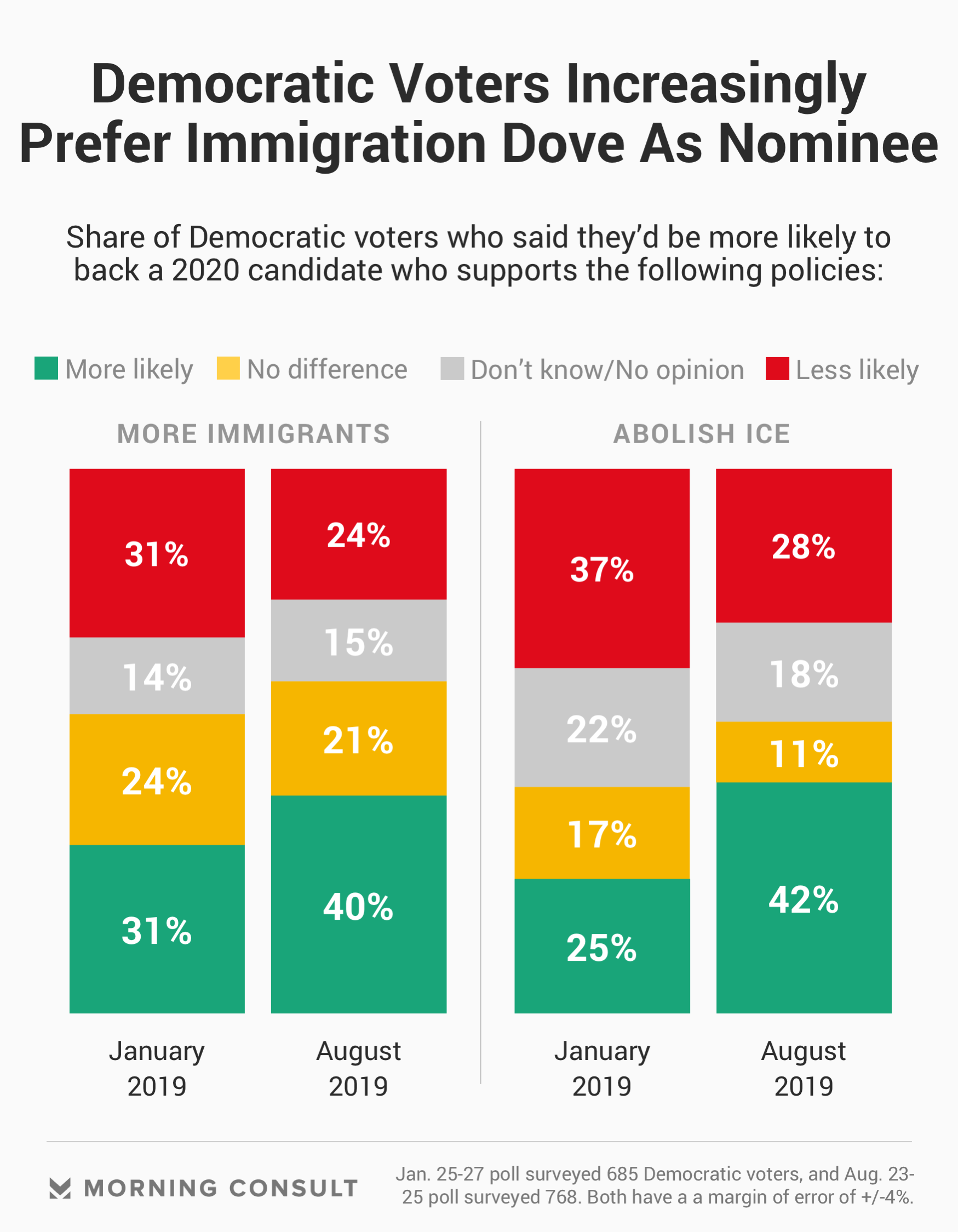 According to a new Morning Consult/Politico poll, 42 percent of Democratic voters said they are more likely to support a candidate in their party’s presidential primary who backs getting rid of Immigration and Customs Enforcement, and 40 percent said the same of candidates who advocate for letting more immigrants into the country.

Sean McElwee, a co-founder of progressive think tank Data for Progress who has advocated for abolishing ICE, said he suspects the stories of detained migrants at the border — coupled with the debate on immigration taking place among Democratic presidential contenders — has helped to drive the party’s voters further left on the issues.

“I think that the crisis at the border has done a lot to show people the fundamental brutality and inhumanity of the U.S. immigration system,” he said, adding that President Donald Trump “has used immigration to try to bolster his support with his base, that’s turning off even more Democrats and independents.”

Morning Consult polling shows that during Trump’s presidency, voters have lost confidence in the GOP on immigration. In the latest survey, congressional Democrats and Republicans were statistically tied on the issue, 41 percent to 40 percent, compared with a 15-percentage point edge for Republicans in March 2017.

After McElwee and other progressive activists led a push in 2018 on abolishing ICE, several Democratic candidates have proposed at least restructuring the interior immigration enforcement agency, but most have stopped short of embracing its full abolition.

Generally, most of the candidates have called for broad, comprehensive immigration reform, but several of the top contenders — including Sens. Bernie Sanders (I-Vt.), Elizabeth Warren (D-Mass.) and Kamala Harris (D-Calif.) and South Bend Mayor Pete Buttigieg of Indiana — are backing former Housing and Urban Development Secretary Julián Castro’s call for the decriminalization of illegal border crossings. 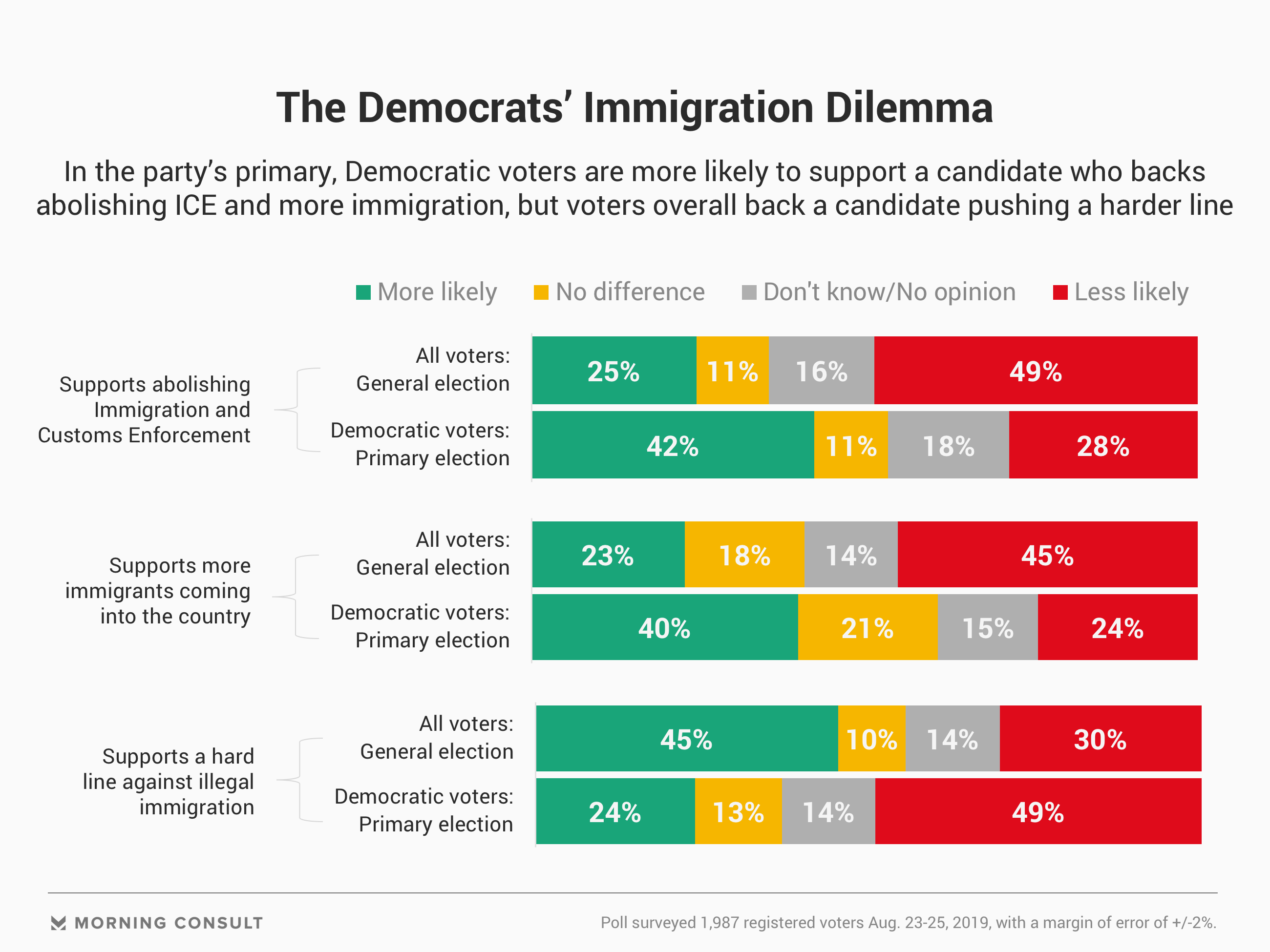 Candidates with such dovish positions on immigration hold less appeal with the broader public.

A plurality (45 percent) of all voters in the new survey said they would be more likely to back a candidate in the general election who supports polices that take a hard line against illegal immigration, and similar shares said they would be less likely to back a candidate who supported more immigration or abolishing ICE. Additionally, a Marist poll in July found 66 percent of U.S. adults disapprove of decriminalizing illegal border crossings.

The front-runner for the Democratic nomination, former Vice President Joe Biden, used his time on stage during the July debates to draw a contrast with Castro.

“I have guts enough to say his plan doesn’t make sense,” he said. “Here’s the deal: The fact of the matter is that, in fact, when people cross the border illegally, it is illegal to do it unless they’re seeking asylum. People should have to get in line.”

Biden has also faced attacks over his record on immigration, with Sen. Cory Booker (D-N.J.) rebuking the front-runner for his association with the rate of deportation under then-President Barack Obama.

But David Bier, who studies immigration policy at the libertarian Cato Institute, said that record is likely to benefit him in the long run by appealing to more moderate Democrats and the overall electorate if he secures the nomination to challenge Trump.

“He has a comprehensive history from the Democratic Party’s perspective, but also has a lot of positive things that don’t go as far as the party would want to take him,” he said. “As long as he can maintain this basically insurmountable lead so far, this is a good strategy for him.”