More Democrats Say the Democratic Party Is Liberal. And They’re OK With It

As the Democratic Party has moved leftward amid its presidential primary, rank-and-file Democrats are feeling a little better about their party’s trajectory ahead of next year’s pivotal showdown with President Donald Trump and the Republicans. 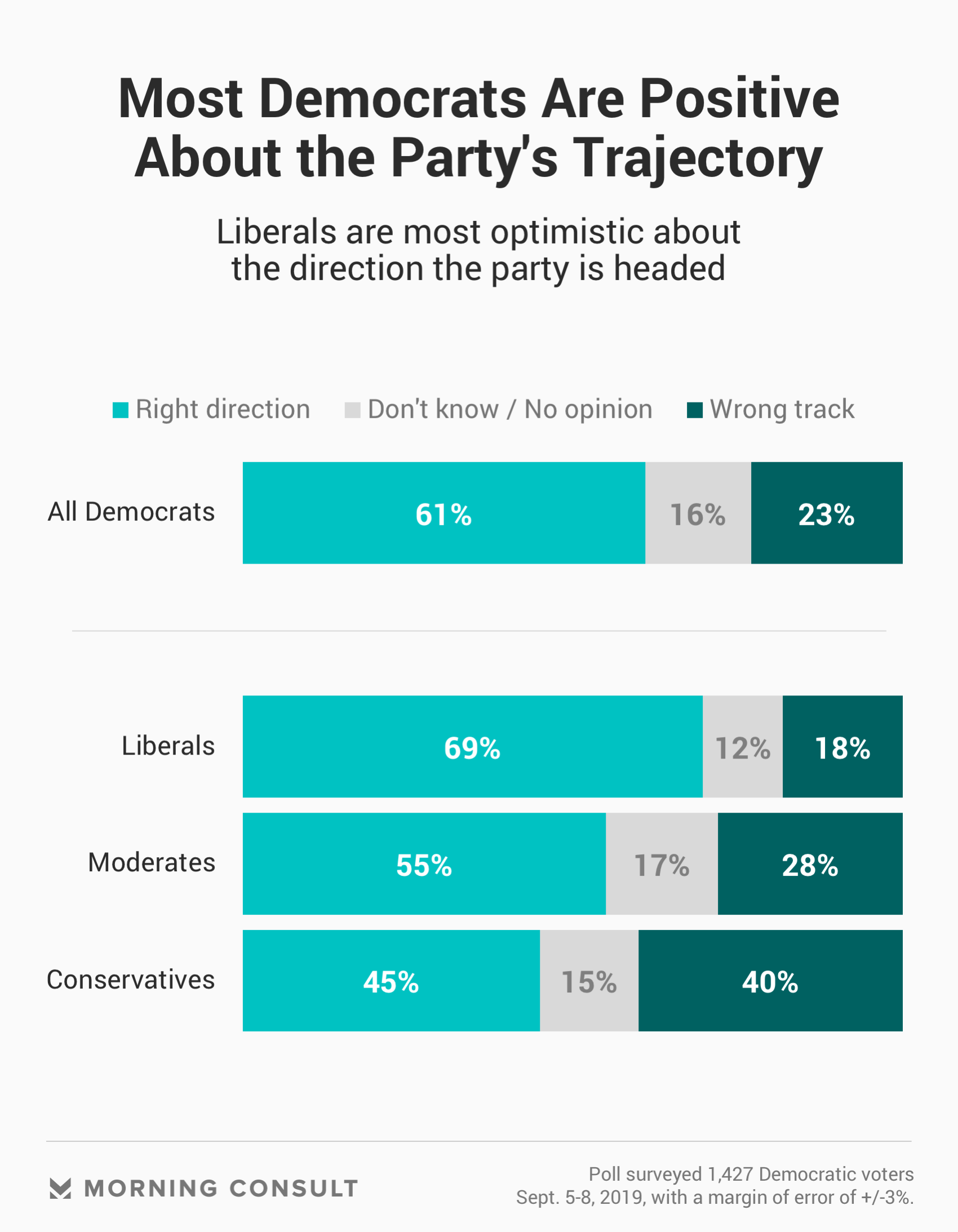 The latest edition of Morning Consult’s State of the Parties poll of Democratic voters found 61 percent said the party is going in the right direction — up 6 percentage points since a June 2018 survey conducted ahead of the midterm elections, when House Democrats picked up 40 seats to take control of the chamber for the first time since 2010.

Nearly two-thirds (63 percent) also said the party is liberal, up 7 points from a year ago. The movement has been reflected on the presidential campaign trail, where the debate over major issues such as climate and health care — in which progressive wishlist items such as the Green New Deal and “Medicare for All” have featured heavily — hasn’t been about whether moving left is the right call, but how far to go.

“The Democratic nominee in 2020, regardless of who it is, will be the most progressive nominee in modern history, whether it’s Joe Biden, Elizabeth Warren or Bernie Sanders, with respect to the policies they’re running on,” said Waleed Shahid, spokesman for Justice Democrats, a group that’s caused some intraparty friction by backing progressive challengers to entrenched Democratic incumbents. “That’s an extraordinary victory for the progressive movement — that we’ve moved the center of gravity.”

While the survey shows Democratic voters are picking up on the party’s leftward drift, a similar share (57 percent) described the party as moderate, statistically unchanged from last year’s figure (59 percent).

Democratic pollster Stan Greenberg, who advised former President Bill Clinton’s and former Vice President Al Gore’s presidential campaigns, said the findings reflect the party’s status as a big tent with a number of contrasting voices, and could bode well once Democrats settle on a nominee.

“I think it’s actually refreshing and reassuring in whether the party is able to consolidate after the primaries,” he said.

While most liberals and moderates agreed that the party is headed in the right direction, conservative Democrats were more bearish: 45 percent said the party is on the up, while 40 percent think it is on the wrong track. However those voters make up a small chunk of the Democratic electorate. 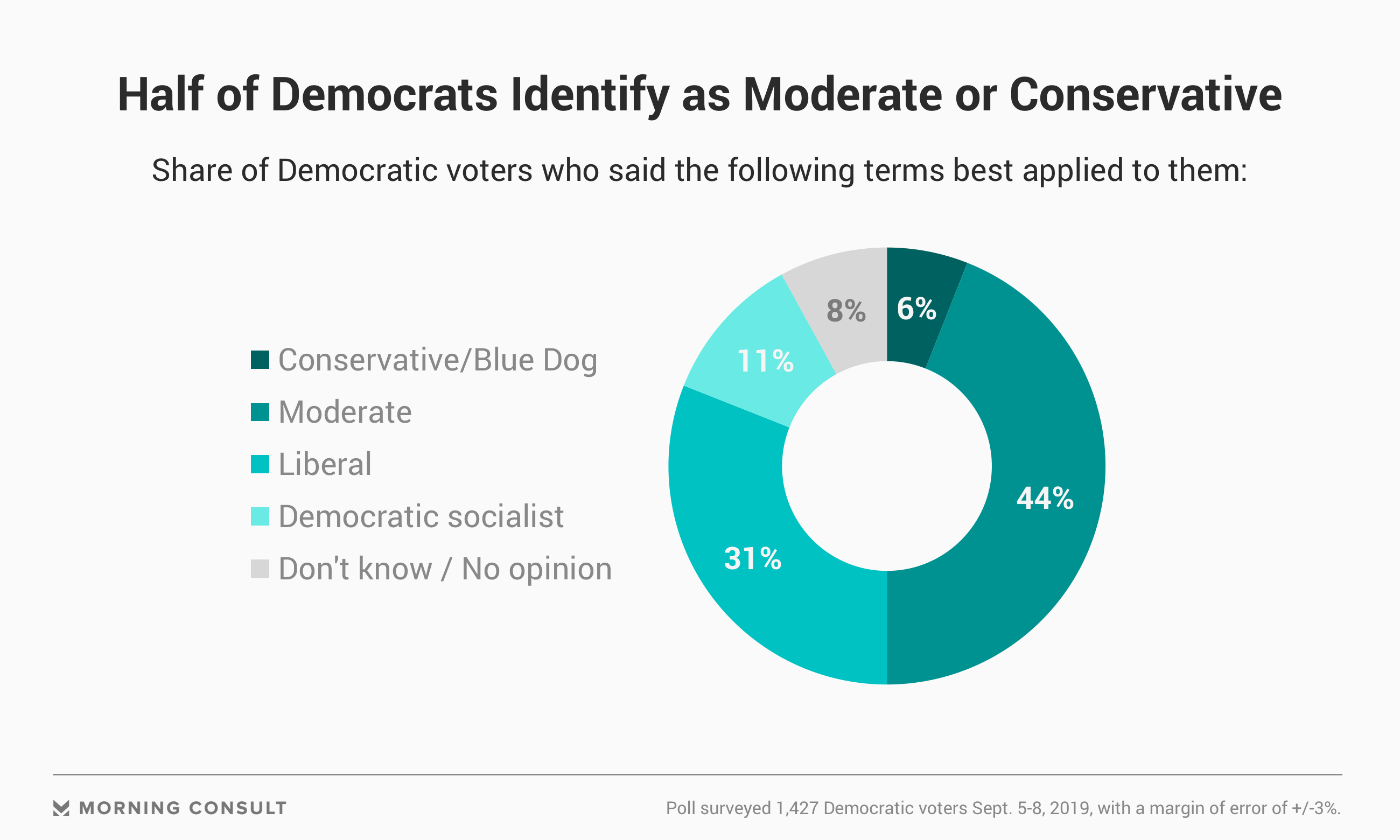 Aside from the ideological debate, questions over temperament, posture and tactics have also consumed much of the oxygen among liberal activists and Democratic operatives during the early stages of the party’s presidential primary campaign, with a newfound skepticism of former President Barack Obama’s idealism — often stymied by Republican opposition in Congress — serving as a subtext.

The survey finds Obama is still overwhelming popular with the Democratic faithful.

Ninety-two percent of Democratic voters have a favorable view of the former president, more than any 2020 candidate, and a 33 percent plurality said he best reflects the party’s current values, statistically unchanged from the past two years. Those sentiments appear to be boosting Biden, the race’s current front-runner who has pitched himself as someone who can work with Republicans. That idealism has been central to the Biden pitch — echoing Obama’s sentiment ahead of the 2012 campaign that a “fever” among Republicans would break if he secured re-election — that the GOP will have an “epiphany” if Trump loses. 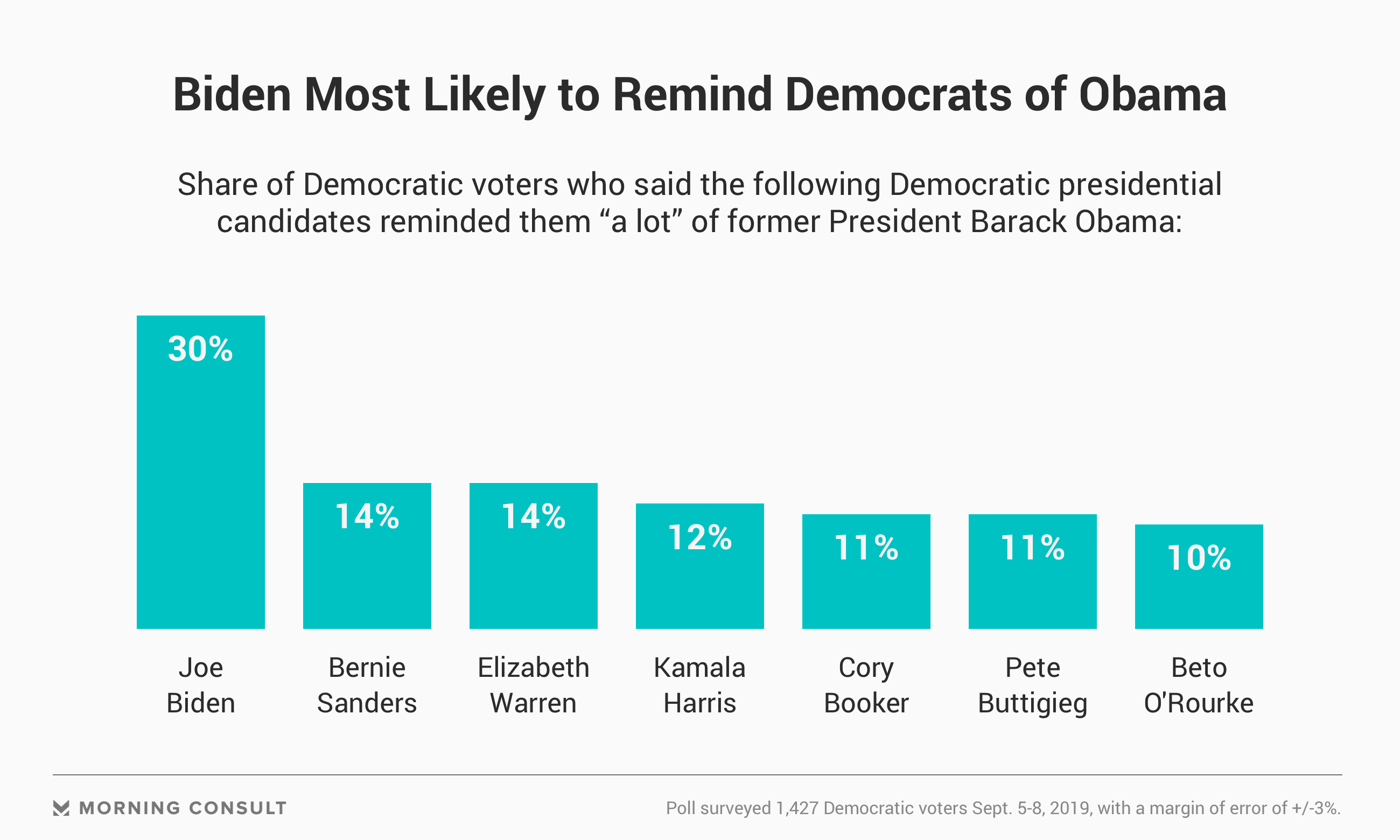 Three in 10 Democrats said the Delawarean reminded them of Obama “a lot,” more than twice the share who said the same of Sen. Bernie Sanders (I-Vt.) and Sen. Elizabeth Warren (D-Mass.), who are solidly in second and third place, respectively, in the latest Morning Consult tracking poll of Democratic primary voters.

Democrats have also grown increasingly likely to label Biden as the party’s standard bearer, from 7 percent in 2017 to 16 percent in the latest survey.

Biden’s message of unity has a receptive audience among Democratic voters. The bulk of them (78 percent) said they prefer a “candidate who can heal the division in our country by bringing people with different views together to make compromises” over one who “will fight back to move the country in a different direction, even if it means breaking some rules.”

“Does that tell you the Democratic Party is a party that leans toward the center and understands the need for compromise, or a party that’s hard line ideologically?” he said. 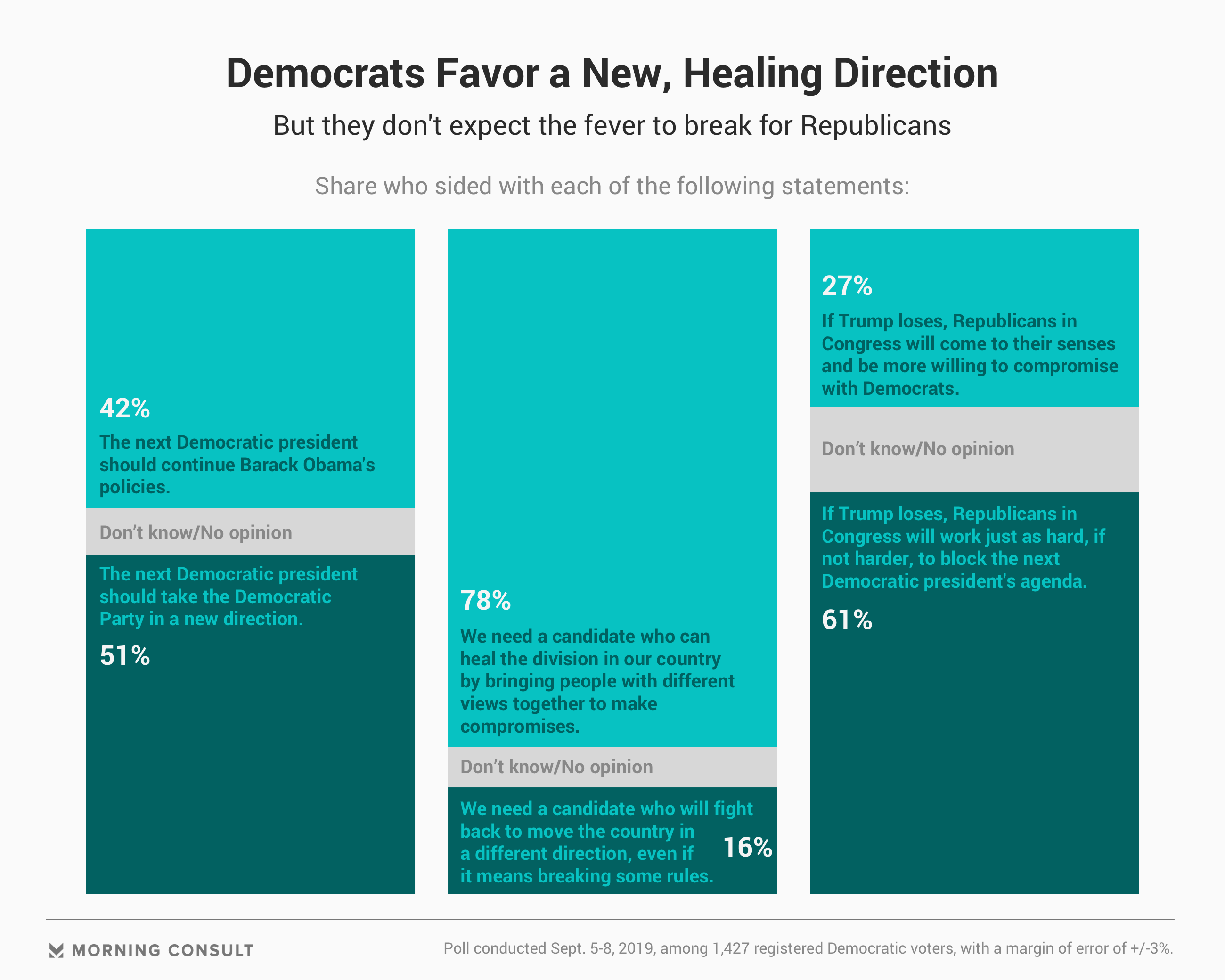 But while Democratic voters prefer the former to the latter, most of them don’t appear to share Biden’s optimism about a Republican “epiphany” happening after Trump’s presidency. Sixty-one percent said Republicans in Congress will work just as hard, if not harder, to block the next Democratic president’s agenda.

Shahid said in order to accomplish his or her campaign promises, the next Democratic president may have to buck the party’s internal lean toward compromise and other institutional norms, such as the Senate’s legislative filibuster, a likely major roadblock for any eventual Democratic president.

“The public in general doesn’t like disruptions — civil disobedience, protests, primary challenges — but they like the outcomes,” he said. “They just don’t like the way to get there.”

The promise of those outcomes, which could move the party in a new direction, may prove an effective pitch as the race approaches the first nominating contests in Iowa, New Hampshire, Nevada and South Carolina early next year, with the survey finding room for a candidate to blaze a fresh trail for the party.

Fifty-one percent of Democrats said the party’s next president should take the party in a new direction, compared with 42 percent who said the person should continue Obama’s policies.

Related: Ahead of 2020, Democratic Voters Are Moving Left on Immigration
Partisanship Primary Elections