For Brands, Talking About Trump Has Risks — Unless They’re Wooing Young Consumers

Millennials, Generation Z applaud brands that are critical of the president

In these polarizing times, brands that decide to make a name for themselves by taking a stand on an issue are making a bold bet: that the potential benefits outweigh the risk of a boycott. A new Morning Consult/Advertising Week poll took a look at a battery of politically charged campaigns and internal corporate policies to see whether anything received universal favor — and whether some things were better left unsaid.

When it comes to President Donald Trump, one of the most prominent lightning rods for criticism, the survey’s findings confirm that brands looking to avoid controversy are better off staying quiet about him. But for brands that target young consumers, going negative on Trump has potential advantages — provided they are willing to alienate older demographics. 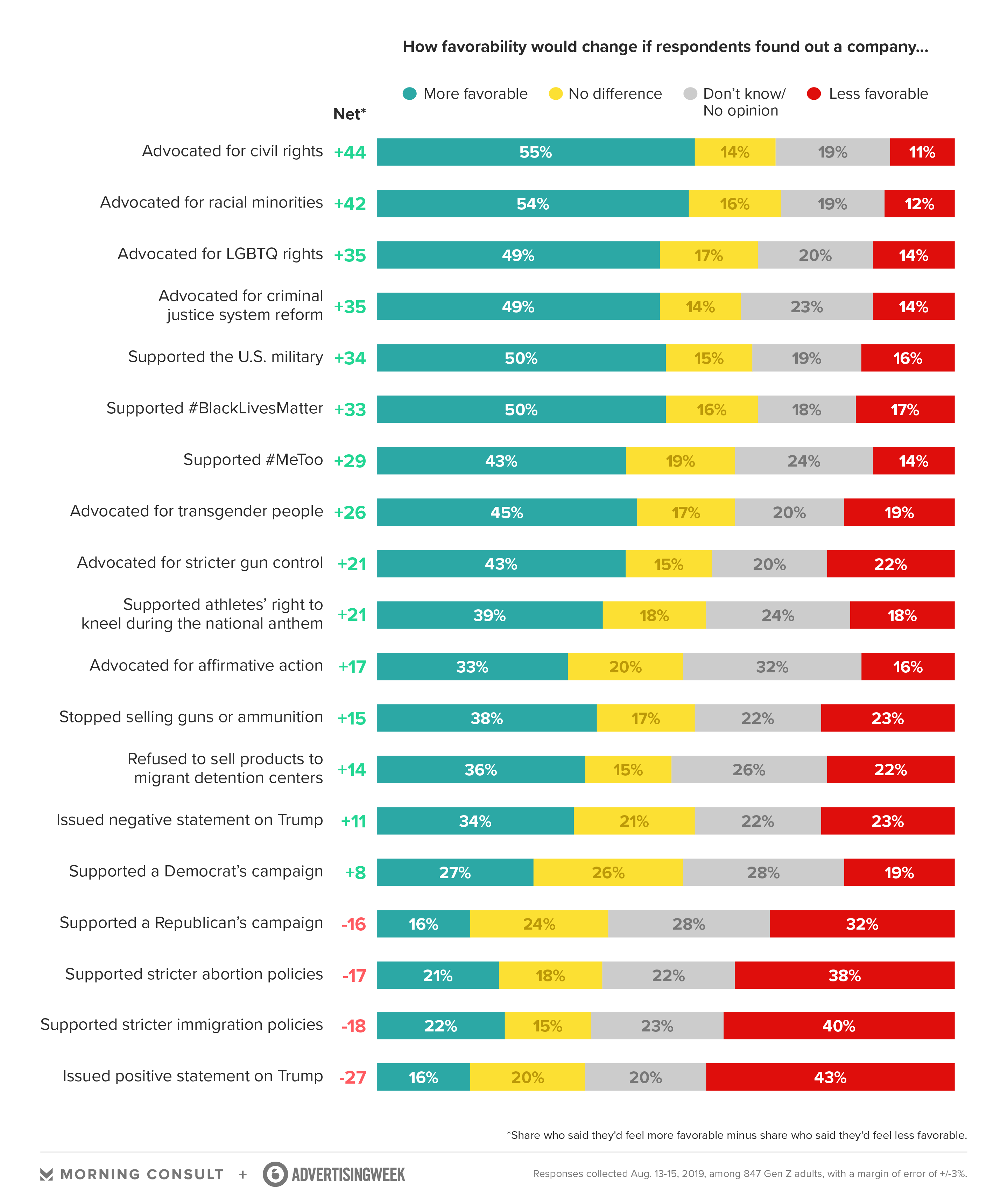 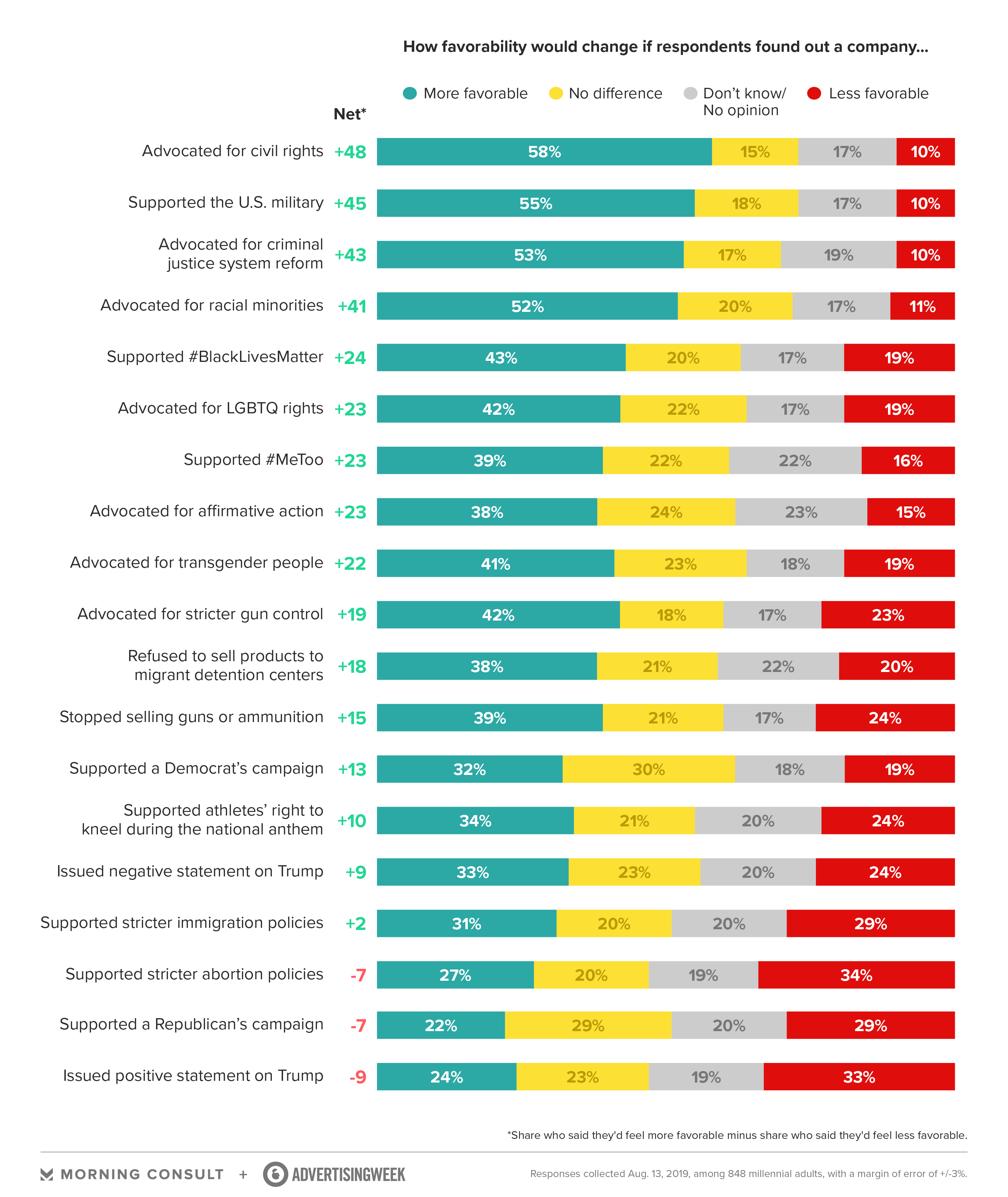 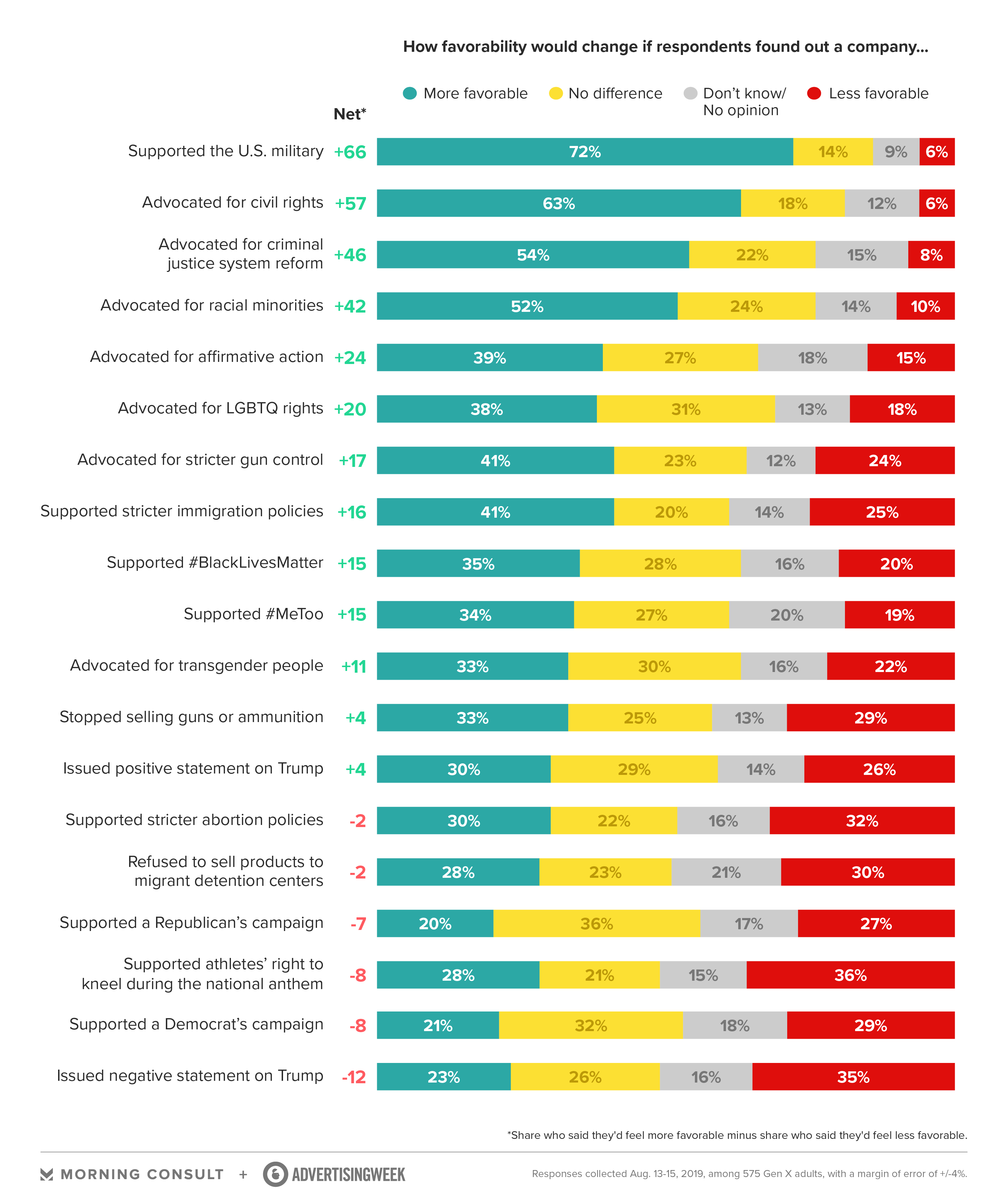 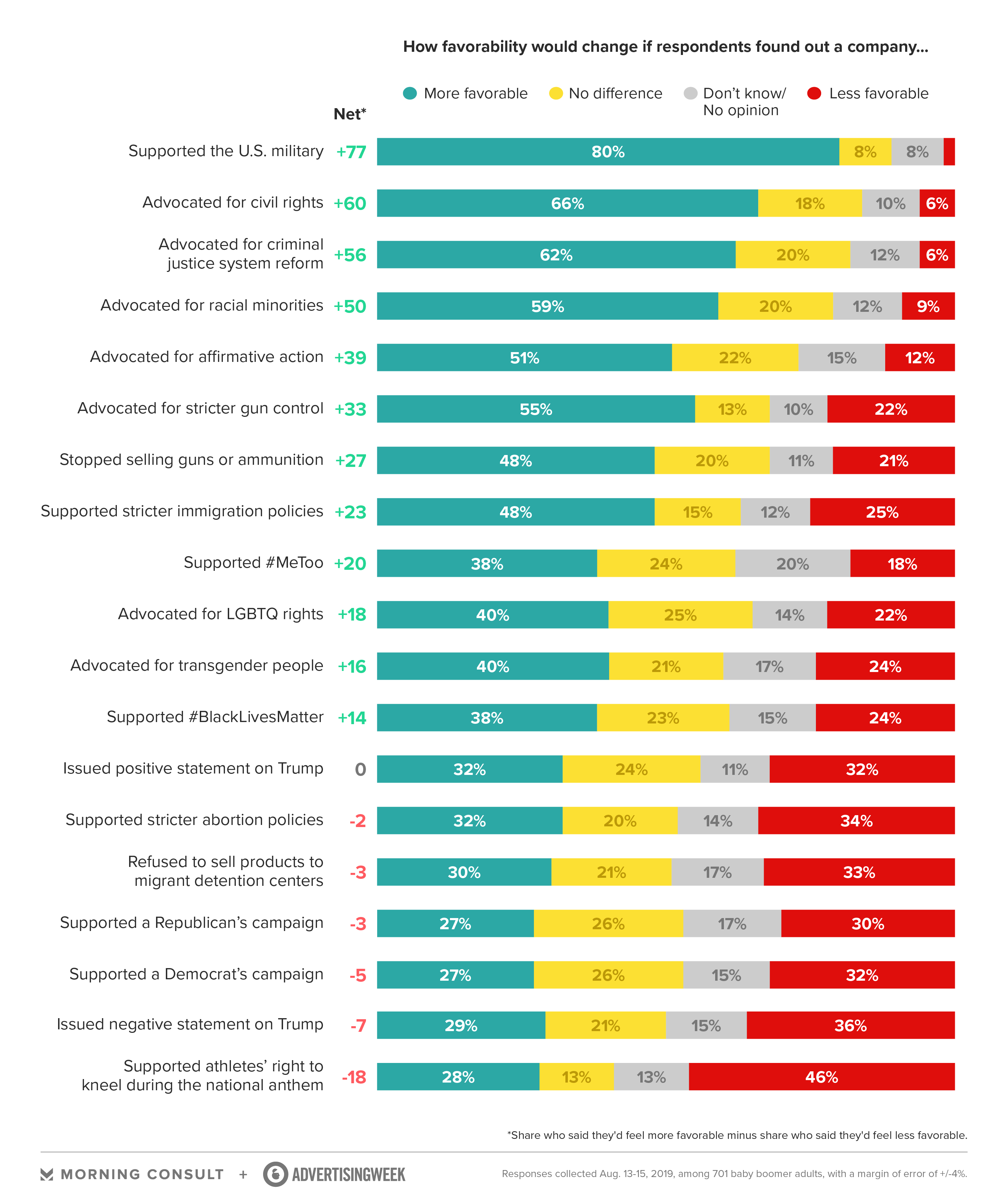 An Aug. 13-15, 2019, Morning Consult/Advertising Week poll of 4,200 adults found that baby boomers and Generation X consumers soured on brands that criticized Trump, as measured by the net favorability, which is the share of people who find something favorable minus the share who find something unfavorable. The net favorability for such a stance was minus 7 for boomers and minus 12 for Generation X.

By contrast, Generation Z and millennial consumers saw it as a net positive if a brand said something negative about the president. Generation Z had the strongest sentiment at 11 percentage points, while millennials came in at 9 points.

Brands that supported the president, however, saw no clear upside among the boomers (net favorability of zero) and a definite downside among millennials (minus 9 points) and Generation Z (minus 27 points). Only among Generation X (4 points) would brands have a potential advantage in backing Trump. The poll’s overall margin of error is plus or minus 2 points.

Supporting a political candidate of either party was frowned on by older generations, while younger generations were supportive of brands that backed Democratic candidates.

Generation Z and millennials had stronger feelings about a brand’s stance on movements such as #MeToo or #BlackLivesMatter than Generation X or boomers did immigration. But brands would do well to avoid promoting stricter measures to prevent abortion, which didn’t play well with any generation.

When it came to companies’ internal policies, consumers generally approved of any changes to improve working conditions or promote sustainable practices and inclusive workforces. But one of the biggest generational divides can be seen when it comes to setting up shop in another country: Even if doing so didn’t cut U.S. jobs, boomers and Generation X disapproved of the move, while millennials and Generation Z saw it in a positive light. 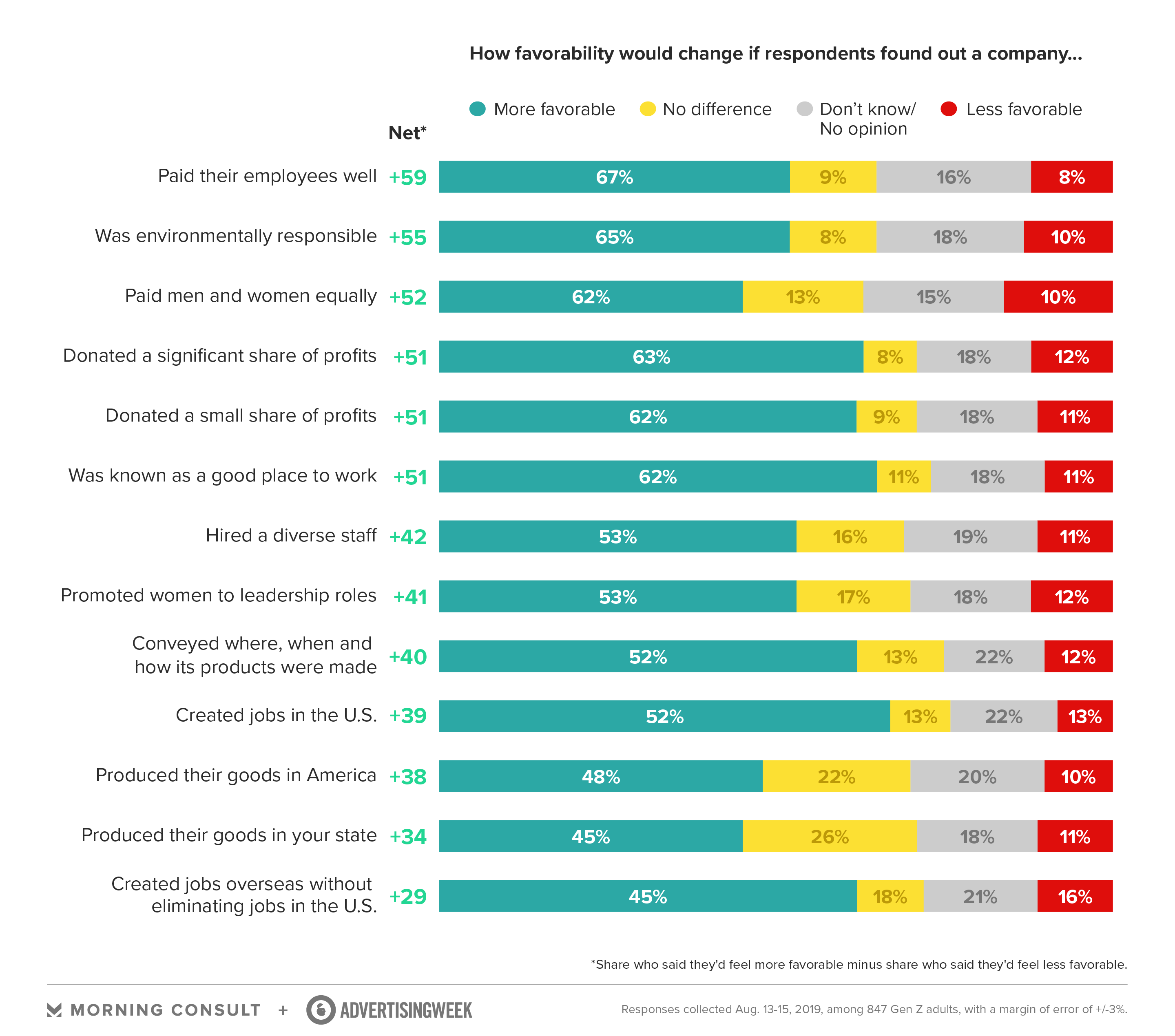 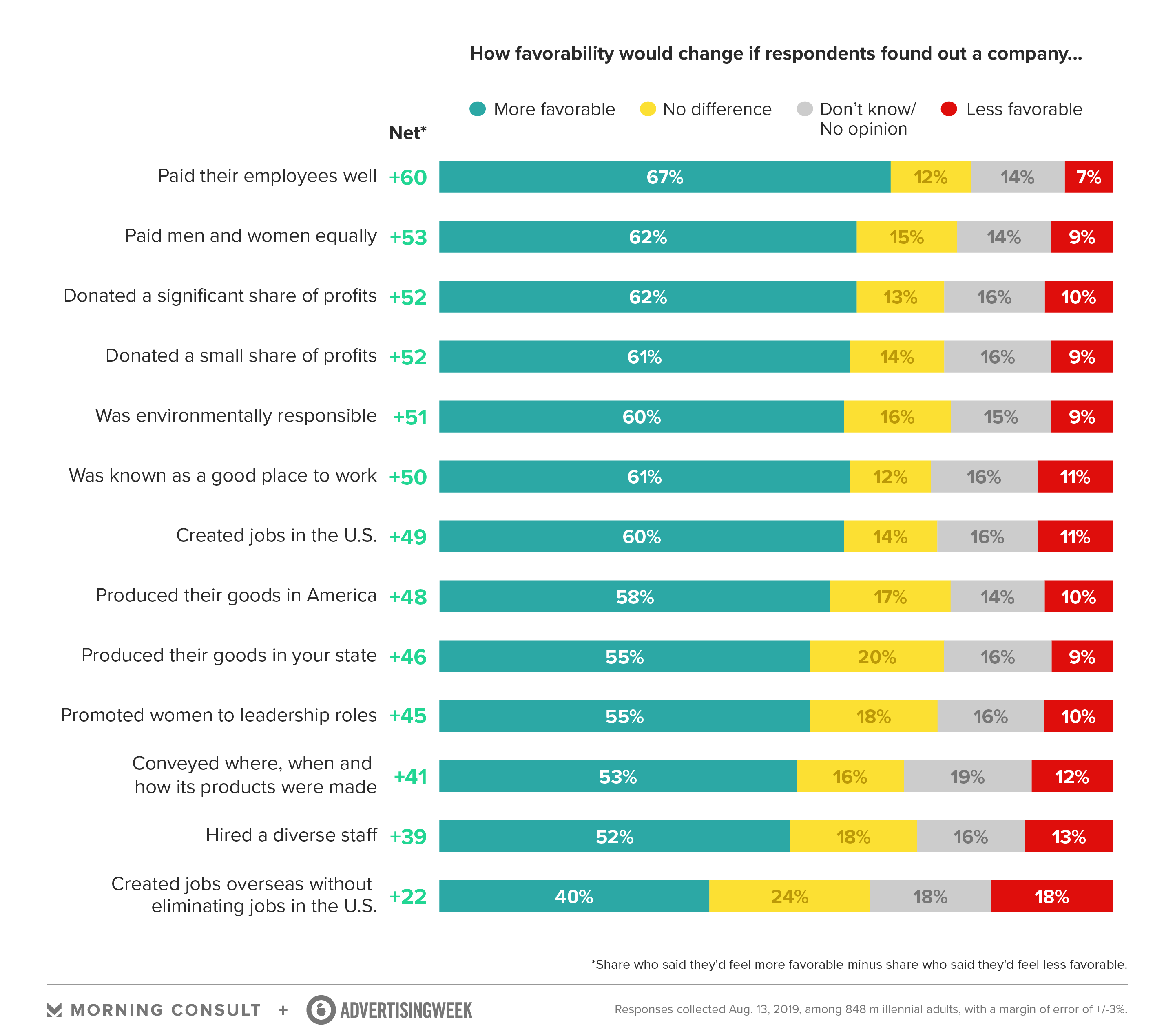 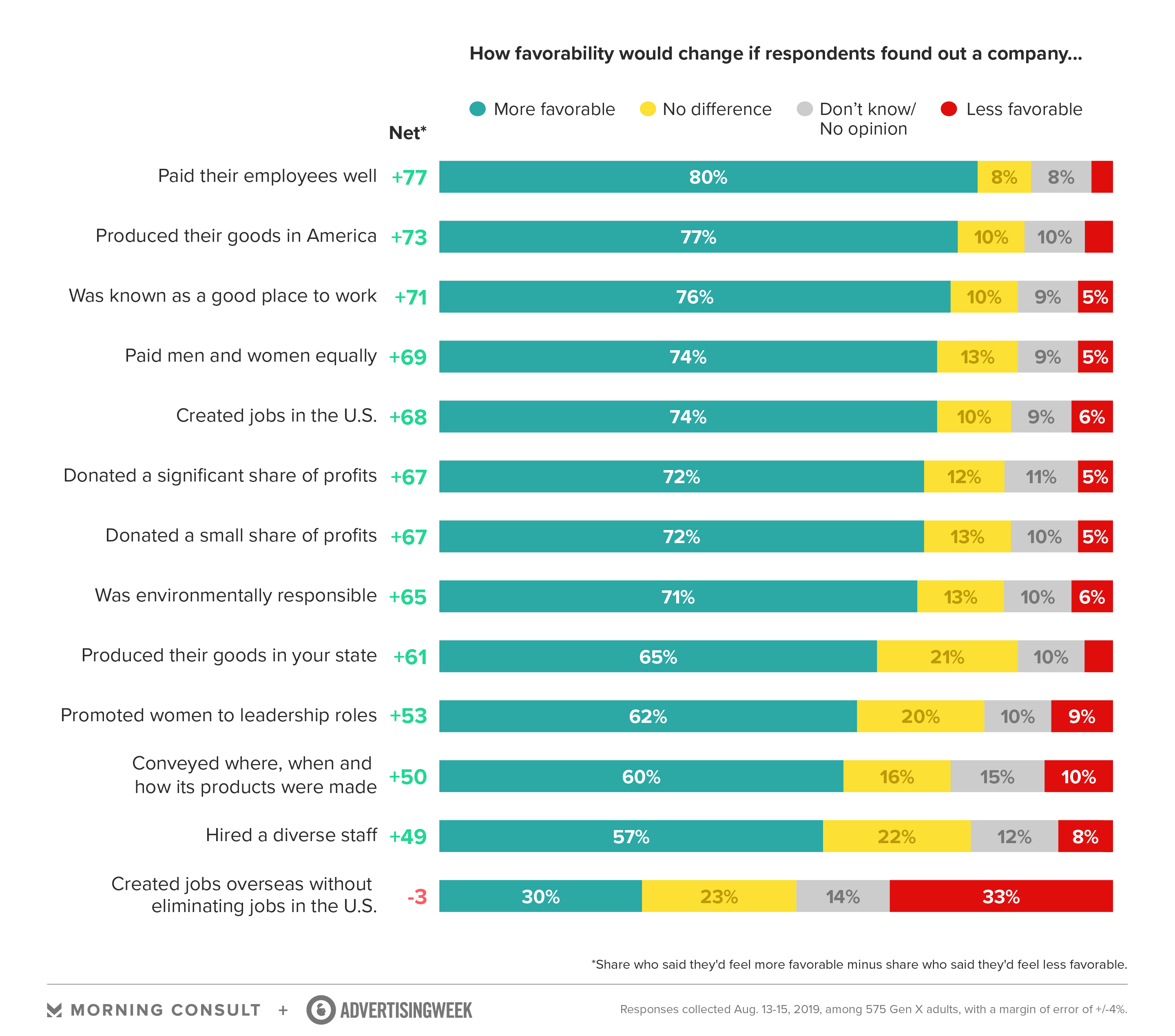 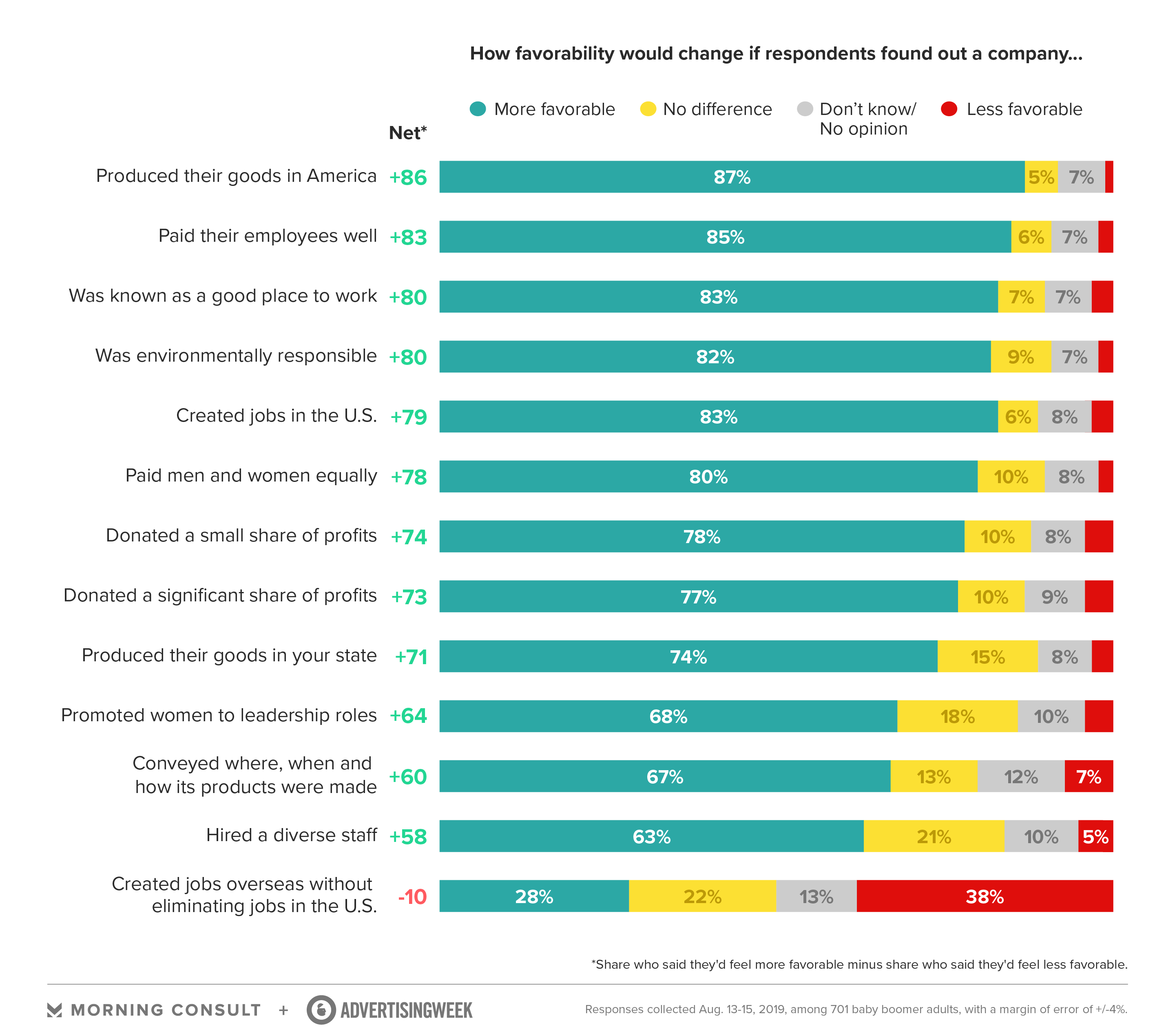 Despite the number of unsafe topics, there were some social and political stances that received approval across all generations. Generations were united in favoring brands if they advocate for the rights of racial minorities, for reforming the criminal justice system, paying women and men equally and supporting civil rights.

See crosstabs for baby boomers, Generation X, millennials and Generation Z demographics, as well as how these topics fared among all adults.