In Washington, Cracking Down on Big Tech Is Popular. In the Rest of U.S., Not So Much

When asked what industries should presidential candidates criticize more, people placed tech in the bottom 5 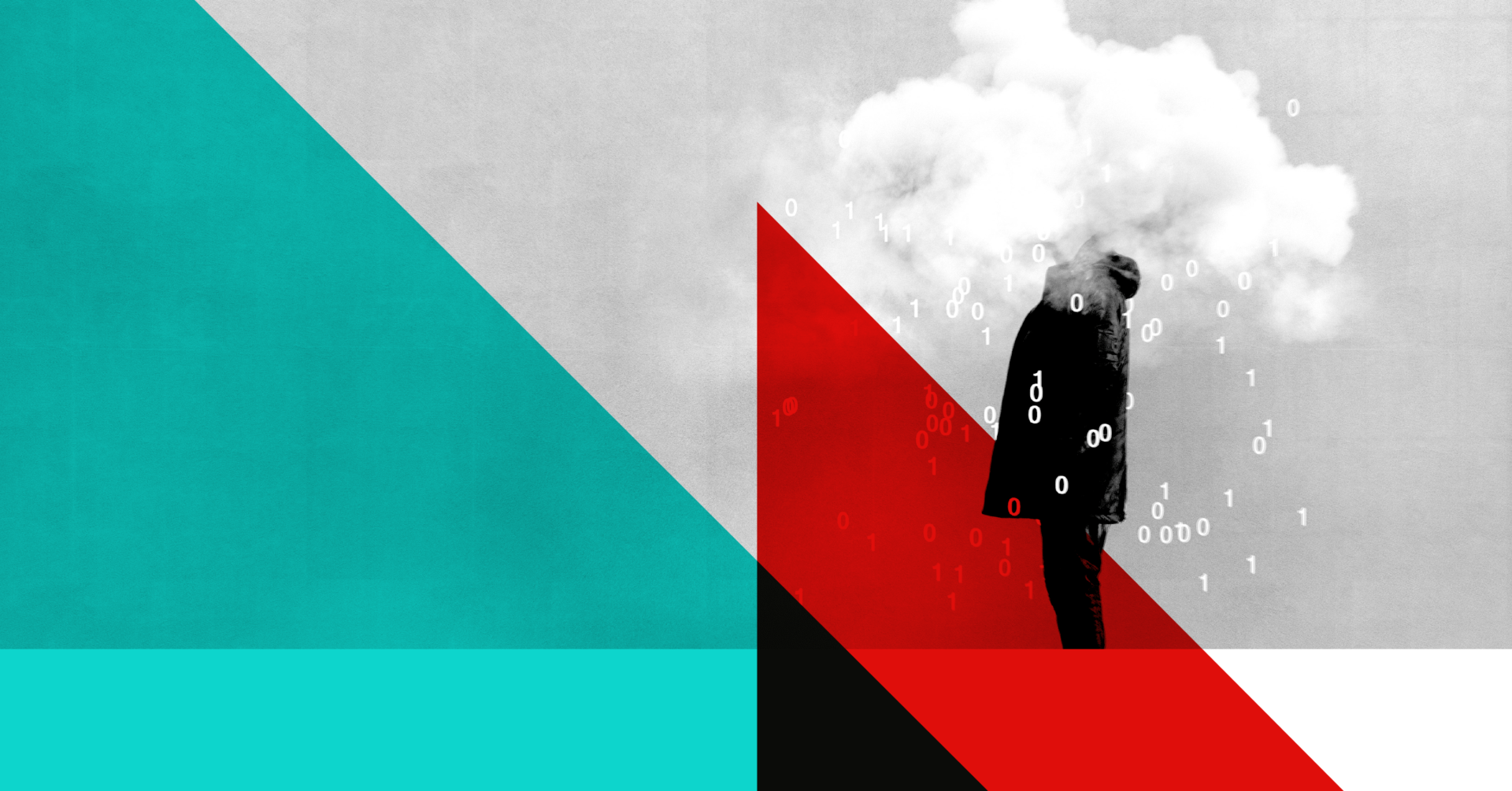 President Donald Trump’s re-election campaign is reportedly planning to double down on its attacks on social media’s alleged political bias in the 2020 cycle. And top Democratic presidential candidate Sen. Elizabeth Warren of Massachusetts is pushing an entire policy plan focused on breaking up tech giants like Amazon.com Inc. and Facebook Inc.

But despite the growing focus on tech in the presidential race, the tech industry is not even in the top 10 on the list of industries that U.S. adults say presidential candidates should scrutinizing, according to a new Morning Consult/Advertising Week poll.

Tech ranked 15th out of a list of 19 industries that U.S. adults said presidential candidates should be more critical of, with 40 percent of all adults saying that more scrutiny of tech is needed. Health care and pharmaceuticals ranked first and second, respectively, at 66 percent and 64 percent. 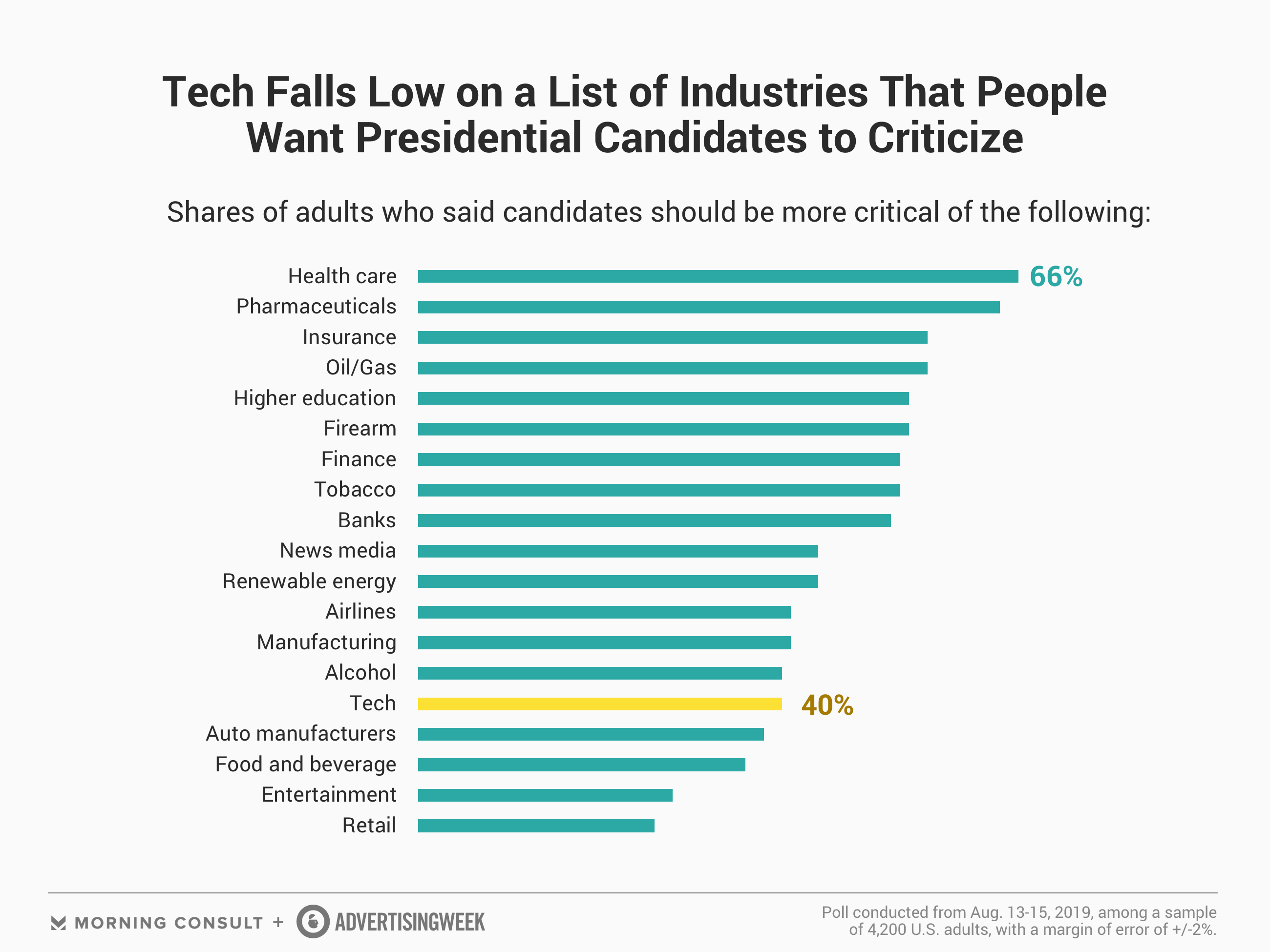 In Washington, the scrutiny of major tech companies has mobilized so quickly that it’s gotten its own name — techlash. The Department of Justice, the Federal Trade Commission and the House Judiciary Committee’s antitrust subcommittee have each launched formal reviews of competition in the tech industry within the past year. Sen. Marsha Blackburn (R-Tenn.) is heading up a technology task force in the Senate Judiciary Committee to examine the power of major technology companies.

And as Trump’s re-election campaign prepares to ramp up attacks against social media companies for those alleged biases, as reported by Axios on Sept. 1, Democratic presidential candidates have been openly considering whether they would want to break up tech giants.

But Rep. Ro Khanna (D-Calif.), who represents the district including Silicon Valley, said in an interview that voters, especially those in rural communities, don’t want candidates to rail against an industry they look to for job opportunities.

“It’s not that they resent technology, it’s that they feel excluded from the possibilities that technology enables,” Khanna said, who is also a national co-chair of Vermont Sen. Bernie Sanders’ presidential campaign. “People are looking for politicians to really shape technology as a positive — to minimize the downsides and the risks of bad outcomes but to maximize the positives.”

Related: Buttigieg Tops Warren in Drawing the Most Donations From Big Tech’s Employees in Q2

Sanders’ scrutiny of technology differs from that of other lawmakers by mostly focusing on issues that directly or immediately impact other industries. In July, Sanders and Rep. Ilhan Omar (D-Minn.) led a group of lawmakers calling on the Labor Department’s Occupational Safety and Health Administration to investigate working conditions in Amazon’s warehouses. And last month, Sanders said he’d call for stricter antitrust enforcement of tech companies as it relates to the news media industry, such as Facebook and Google.

The front-runners in the Democratic presidential primaries are former Vice President Joe Biden, Sanders and Warren, respectively, per the latest Morning Consult tracking data — with the Massachusetts senator being the only candidate who has continued to gain momentum throughout the race. At the same time, Warren is arguably the candidate with the most in-depth plan to regulate big technology companies.

But Khanna said that he thinks it’s a mistake for any candidate, especially a Democrat, to run on an “anti-technology” agenda. Instead, he argues, Democrats should be running on a platform that gives Americans opportunities to embrace the tech industry through new jobs and training.

Adults surveyed in the Morning Consult report did not rate tech as a high priority regardless of party identification: 42 percent of Democrats said they wanted candidates to be more critical, placing the sector 15th after firearms, health care and the oil and gas industry. For Republicans, tech ranked 11th, with 44 percent saying candidates should be more critical.

Republicans tend to conflate social media issues with those they have with the news media, said Julian Sanchez, senior technology fellow at the libertarian Cato Institute in Washington.

In the Morning Consult report, 61 percent of Republican voters said presidential candidates need to be more critical of the news media industry, placing the industry third, just behind pharmaceuticals and health care. Thirty-eight percent of Democrats and 44 percent of all adults said the same.

Rory Cooper, a managing director at Purple Strategies, a bipartisan political communications firm in Alexandria, Va., said voters tend to prioritize issues that directly affect them and cause them personal challenges. Tech’s low place on the list of industries candidates should be criticizing indicates the industry may not be as much of an immediate concern as health care or gun policy.

And Shane Tews, a fellow at the American Enterprise Institute in Washington who focuses on tech issues, said it’s difficult for voters to understand and prioritize tech regulations because the plans presently laid out by presidential candidates are largely superficial, with few going into the nitty-gritty of what antitrust regulation in the tech industry would actually look like.

“Right now, they’re good at posing the questions, but I’m looking for the next phase,” she said.

But Cooper said that just because voters don’t see tech as a higher priority for presidential candidates, it doesn’t mean the industry can check out — interest in regulating and legislating the industry in Washington is still there.

“All of the industries, including tech, need to understand that Washington makes regulatory decisions based on political whims,” said Cooper, who also served as the communications director for former Rep. Eric Cantor (R-Va.). For the tech industry now, it’s “more of a long-term vulnerability than one they need to be worried about in the next few months.”