Next Time, Voters Want a Health Care Debate That Hits Closer to Home

Sen. Bernie Sanders, former Vice President Joe Biden and Sen. Elizabeth Warren discussed 'Medicare for All' vs. private insurers at the third Democratic debate in Houston. But voters who watched say they're more interested in hearing about the costs of health care in future debates. (Win McNamee/Getty Images)
By Yusra Murad

Even as the endless churn of the news cycle has allowed a variety of issues to move to the forefront of the Democratic presidential primary, one thing has yet to change: As evidenced by five evenings of debates across three cities, health care continues to pulse at the heart of the election.

And if the topic keeps taking up the most airtime on stage, a new Morning Consult survey offers some insight on how candidates seeking to prove their competence on health care can resonate with voters.

Voters tuning in aren’t interested in another conversation about how either a “Medicare for All” or public option proposal would alter the private insurance market, according to a new survey fielded just after the third debate last week in Houston. Likewise, they can do without the sparring over how implementing a new system would affect national health expenditures. Instead, people want to hear about how their party’s nominee will address the skyrocketing price of health care — that is, their copays, deductibles and the cost of prescription drugs.

The Sept. 13-15 poll asked 533 voters who watched the debate what they would like to see candidates discuss vis-à-vis health reform in future debates. And a 47 percent plurality of those voters said they sought information directly related to their personal health costs, such as how reform might change their copays and deductibles (25 percent) and prescription drug prices (22 percent). The survey has a 4-point margin of error.

The same sentiment is seen among the 318 potential Democratic primary voters surveyed in the poll, a subsample with a 5-point margin of error. 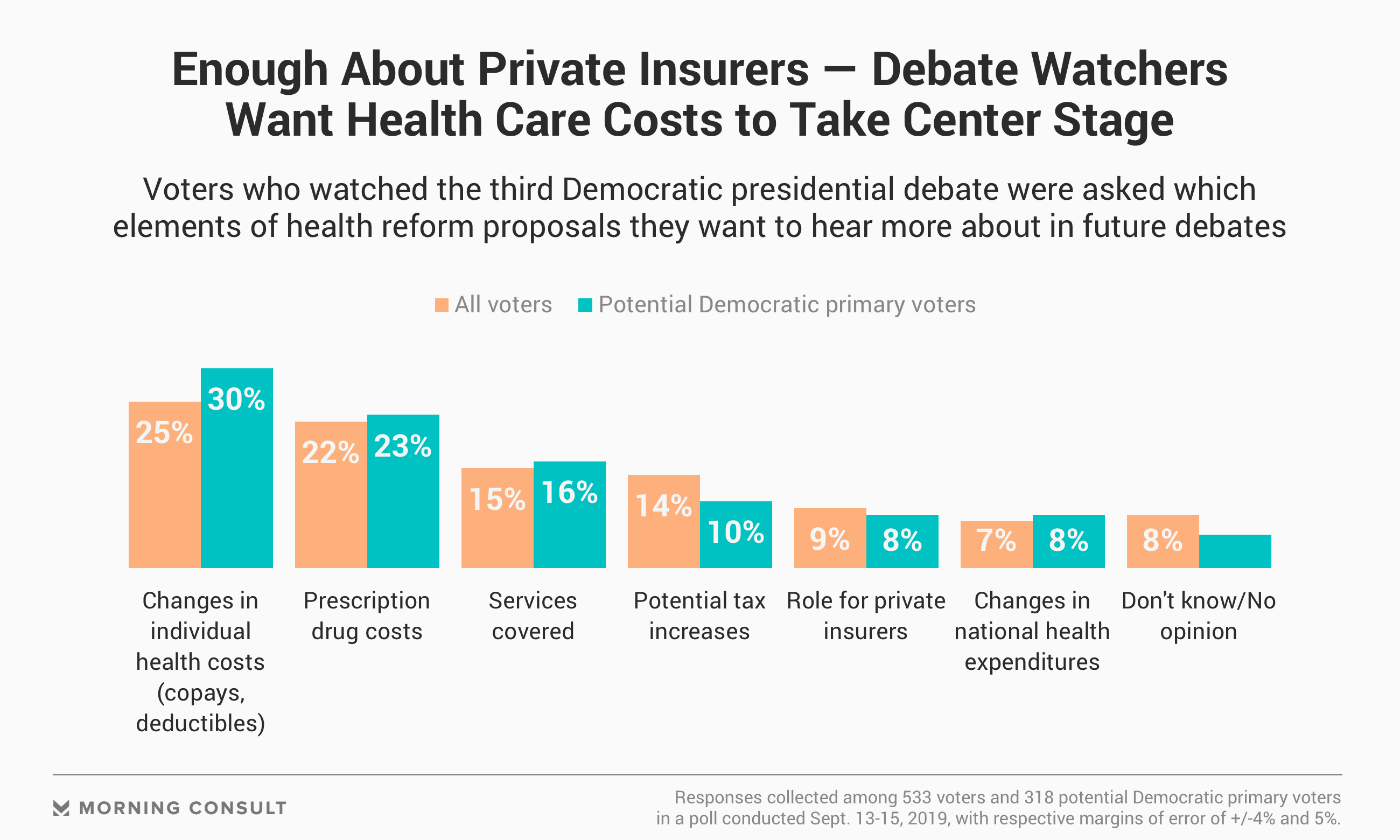 Chris Jennings, former senior health policy adviser to the Obama and Clinton administrations, said the debate thus far has been a “missed opportunity.”

“Policy makers should be meeting the public where they’re at on this issue, not with some broad policy discussion about different structures of reform that are years away when there is a here-and-now crisis about cost and complexity,” Jennings said.

In Houston, ABC’s George Stephanopoulos opened the debate with a question for former Vice President Joe Biden on whether Sens. Elizabeth Warren (Mass.) and Bernie Sanders (Vt.) were “pushing too far” by proposing tax hikes to implement Medicare for All. Discussing potential tax increases ranks low on the list for all voters and potential Democratic primary voters, with only 14 percent and 10 percent, respectively, saying they want to hear more about it in future debates.

Responding to Stephanopoulos, Biden pivoted immediately to comparing the cost of implementing his plan versus Medicare for All, a topic equally as unlikely to elicit interest in the future, with just 8 percent of voters looking for more substantive conversation on national health expenditures.

For the average American, the difference between $740 billion and $30 trillion in costs (what Biden said would be the cost of his plan to shore up the Affordable Care Act versus Sanders’ plan) for the government may feel almost immaterial. But health care premiums deducted from biweekly paychecks, hikes of even $10 at the pharmacy counter and prohibitive copays at the primary care clinic hit much closer to home.

Since 2008, average annual deductibles have increased eight times faster than wages, and 26 percent of all covered workers have a deductible of at least $2,000, according to a Kaiser Family Foundation report released in October 2018.

According to Jennings, moderators share responsibility in bringing attention to issues relevant to the public, like drug prices and surprise medical bills — two topics dominating the halls of Congress that have been notably absent onstage.

Related: Rising Democratic Support for Candidates Who Favor ‘Medicare for All’ Over ACA

Moderators “want ‘gotcha’ questions about this debate on Medicare for All versus building on the ACA, endlessly,” Jennings said. “But it’s also the responsibility of candidates to pivot on this issue to highlight the problems that voters are facing today, and outline their policy solutions to address them.”

That could explain why Warren has kept pace alongside Biden and Sanders on the issue of health care, despite trailing the two in the most recent Morning Consult poll on the overall primary race. In the Sept. 13-15 survey, 18 percent of all Democratic voters place their vote of confidence with the Massachusetts senator to clean up the health care system — roughly equal to the share who say the same about Biden and Sanders (both 20 percent).

In sharp contrast to Biden, Warren used the question on whether Medicare for All would eliminate private insurers or raise taxes as a launchpad to address the “total cost” of coverage and what families pay for health care today.

Championing Medicare for All as a mechanism to reduce prices and soothe Americans’ kitchen-table health care anxieties, Warren has distanced herself from the broader, ideological questions hanging over the Democratic Party about replacing the Affordable Care Act with a single-payer system.