Most Adults Want Corporations to Act on Climate Change

Companies would be wise to use their influence to reduce environmental impacts, some experts say

Climate strikers in Friday’s youth-led, worldwide protests called on the political establishment to take action to reduce emissions and prevent the worst potential impacts of climate change. But a wide swath of the public thinks climate responsibility extends past the government, with more than half of U.S. adults saying they want corporations to act to influence climate change, according to a recent Morning Consult poll.

The climate movement is forcing companies to confront the issue, weighing their profitability against environmental impacts and an increasingly concerned public.

“We’ve already seen impacts in our supply chain from a warming world,” said Chris Miller, global social mission activism manager at Ben & Jerry’s, which sources ingredients internationally. “This is an existential threat to humanity. It’s also a threat that we’re already seeing within our company.”

Fifty-four percent of the 4,200 adults surveyed from Aug. 13-15, 2019, said they strongly or somewhat agree that corporations should work to alter the impacts of climate change, up slightly from the 51 percent of the 2,200 adults who said the same in a July 2018 poll. Both polls have a margin of error of 2 percentage points.

A majority of Americans (55 percent) in August said corporations have either a lot or some influence in altering the impacts of climate change — virtually unchanged from the 56 percent who said the same in 2018. That’s lower than the 61 percent of adults who said this year that they think corporations have a lot or some influence over altering the public’s general attitudes about cultural or social issues and the 67 percent who said companies are influential in getting politicians elected. 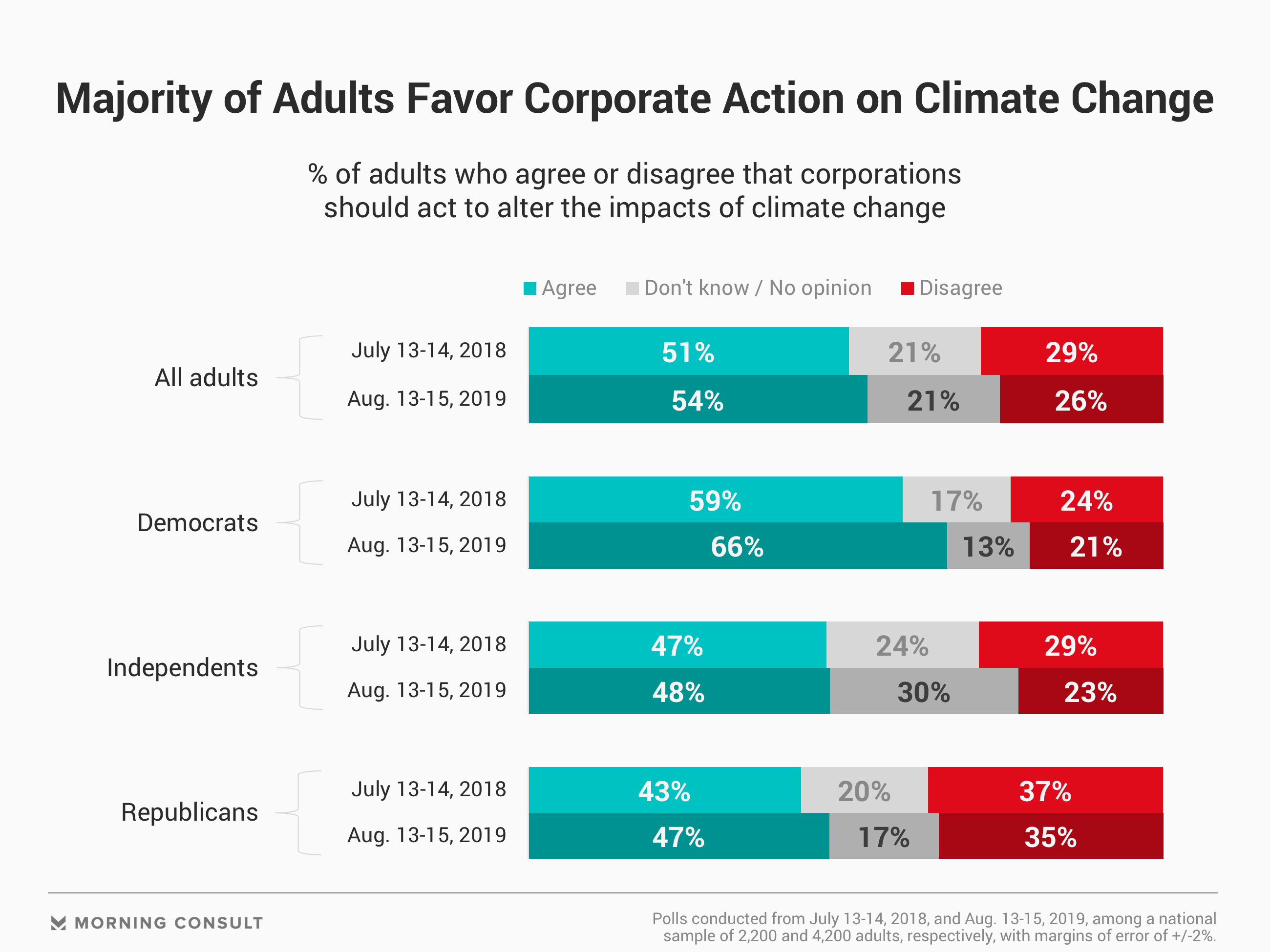 Some corporations directly engaged with the recent climate protests, with more than 180 companies participating in some way, and more than 170 joining a business statement expressing a commitment to reducing their environmental impact.

Arcadia Power Inc., an energy service that connects ratepayers to clean energy, signed onto the statement and is offering additional discounts related to the climate protests, said Kiran Bhatraju, chief executive and founder of the company.

Companies have led on “developing new, interesting ways to purchase clean energy and change markets and push utilities. And they shouldn’t slow down,” Bhatraju said, pointing to Google Inc.’s “massive” renewables procurement announcement last Thursday. If companies en masse decided similarly to embrace clean energy, “we would change the dynamic pretty quickly. But it can’t just be the Googles of the world.”

Attitudes differ by political party. Sixty-six percent of Democrats now say they think corporations should work to alter the impacts of climate change, up 7 points from 2018. Forty-seven percent of Republicans said they think corporations should act on climate, a 4-point increase from 43 percent last year. The margin of error for both parties in the 2019 survey is 3 points, with a 3-point margin for Democrats in 2018 and 4 points for Republicans in the same poll.

Republicans consistently lag behind Democrats in support for corporate action, said Shane Skelton, a partner at the Beverly Hills, Calif.-based consultancy S2C Pacific, even though corporations “are exactly who the GOP should want weighing in on policy” — not just Democratic politicians or climate activists. Corporations “need to have a voice in this debate, because they’re the only ones who I think can promote solutions to check the box of addressing climate but also not hindering economic growth.”

That doesn’t mean companies are wise to engage with the youth climate protests, Skelton said. “Lining up behind a bunch of 16-year-olds who carry signs and yell, in my view, is not a productive way for businesses to engage, and I think it could turn off a lot of right-leaning but also just moderate, average, everyday consumers.”

Despite the potential to lose customers, taking climate-friendly actions can be good business. “Securing cheaper renewable power is going to increase their profitability, so they can win on the balance sheet,” said Brandon Hurlbut, a co-founder of advisory firm Boundary Stone Partners who served as chief of staff to former Energy Secretary Steven Chu. Hurlbut added that the extreme weather events exacerbated by climate change can lead to instability for businesses in the long run.

Corporate leaders will be judged by history, Hurlbut said. “‘Where were you in 2019?’ Were you a part of this problem, or were you helping solve it?’”