Why Warren’s Edge Over Sanders Is Likely to Grow

Sens. Bernie Sanders (I-Vt.) and Elizabeth Warren (D-Mass.) greet each other at the start of the Democratic presidential debate in Detroit on July 30. A new poll shows Warren outperforming Sanders in head-to-head matchups. (Justin Sullivan/Getty Images)
By Eli Yokley

Sen. Elizabeth Warren (D-Mass.) has inched past Sen. Bernie Sanders (I-Vt.) in the Democratic presidential primary, and new data suggests her momentum is likely to continue as the race moves into its next phase.

Asked to pick between the two candidates in a hypothetical matchup, 49 percent of Democratic primary voters said they’d opt for Warren, compared to 38 percent who said they’d vote for Sanders, according to a new Morning Consult/Politico poll. 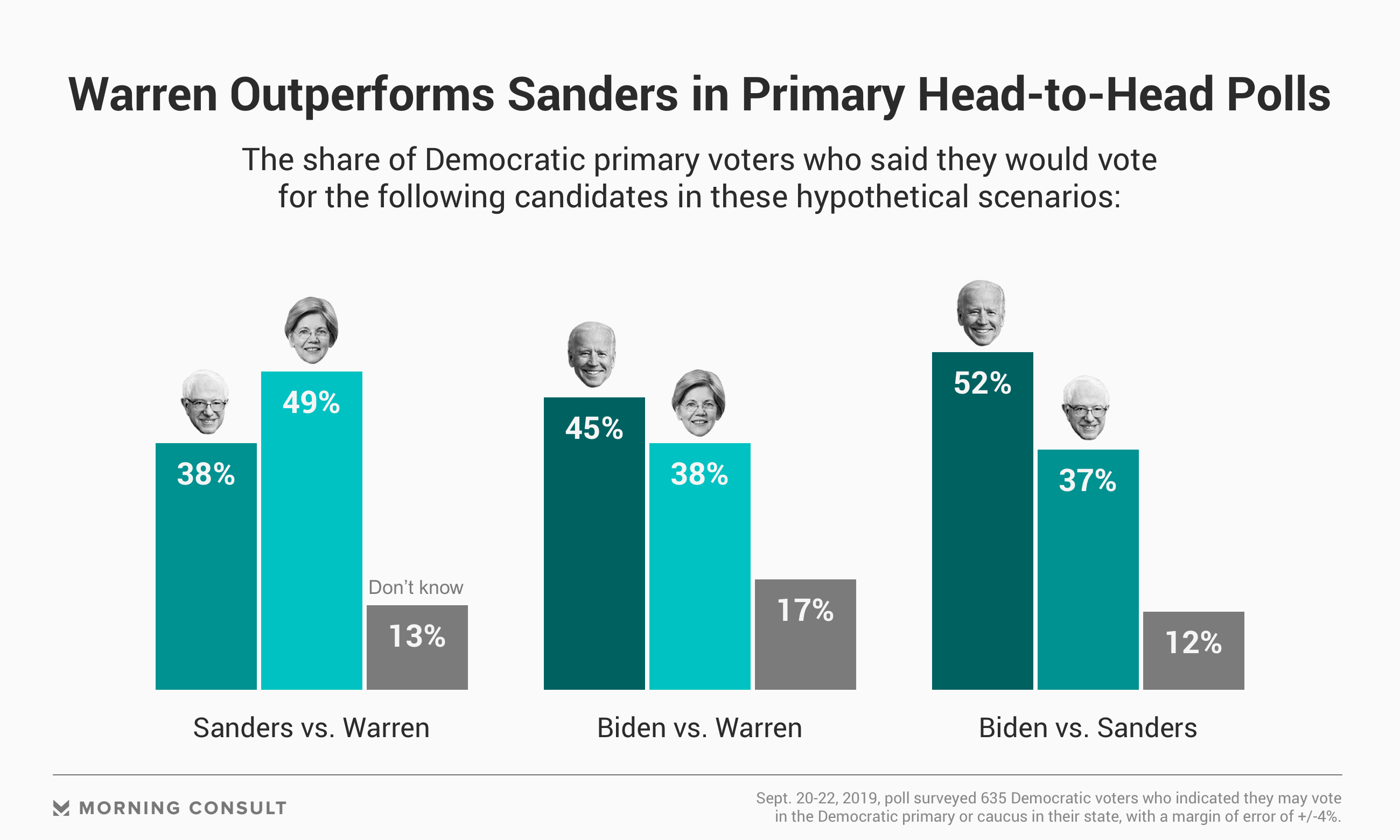 Kyle Kondik, managing editor of Sabato’s Crystal Ball at the University of Virginia Center for Politics, said the finding is another indicator that Warren has either surpassed Sanders with the Democratic electorate, or is in a good position to do so.

“They have generally been polite to each other, and even mutually supportive, but if Sanders wants to truly vie for the nomination, he may have to try to find ways to undermine Warren,” he said in an email. “Likewise, Warren’s path would be clearer if Sanders was not in the race, even though their bases of support are not identical.”

Nathan Gonzales, a nonpartisan political analyst who publishes Inside Elections, said the deficit speaks to Sanders’ challenge in securing the Democratic nomination as an outsider candidate.

“I think the numbers show that when given a choice between two candidates with similar messages, Democratic voters will choose the Democratic candidate,” he said in an email. However, he said as long as both remain in the race, there is potential for them to divide the party’s more liberal voters, benefiting President Barack Obama’s former No. 2.

The survey, conducted Sept. 20-22 among 635 Democratic voters who indicated they may vote in the Democratic primary or caucus in their state, had a margin of error of 4 percentage points.

Related: Warren Pulls Ahead of Sanders for No. 2 Spot Among Democratic Primary Voters

Her edge over Sanders is reflected in the RealClearPolitics average of primary polling. And in the early states, Warren has a slight advantage in New Hampshire, is essentially tied in Nevada and leads both Sanders and Biden in Iowa, according to the polling averages.

Morning Consult’s latest tracking poll suggests the makeup of both the Sanders and Warren coalitions share some similarities, though there are notable differences. Among voters who selected either Sanders or Warren as their first-choice candidate in the party’s nominating contest, Warren’s supporters tended to be older and whiter, and more likely to identify themselves as liberal.

“There were a lot of people supporting Bernie Sanders in 2016 who were ‘Draft Warren’ people first,” said Sean McElwee, co-founder of Data for Progress, a liberal think tank.

Warren also has an advantage over Sanders with voters who describe themselves as “extremely” or “very” interested in politics. They make up roughly a third of her supporters compared to less than a quarter of his.

Sanders’ campaign did not respond to a request for comment.

Along with her head-to-head lead over Sanders, Warren also performed better than her Senate colleague against Biden. While Sanders trails Biden by 15 points (37 percent to 52 percent), Warren’s deficit is just 7 points (38 percent to 45 percent).

McElwee said Biden’s nomination is not inevitable, but he “is not going to be beaten without some sort of shift in the field as it currently is.”

“You need a consolidation of the progressive vote and to have an authentic breakthrough with a large enough bloc of people of color that you can be competitive in South Carolina and Nevada,” he said. “If you get crushed there, Biden wins.”