By a 27-Point Margin, Voters Back Warren’s Plan to Tax ‘Excessive’ Lobbying

Majorities from all parties support efforts to limit government lobbying 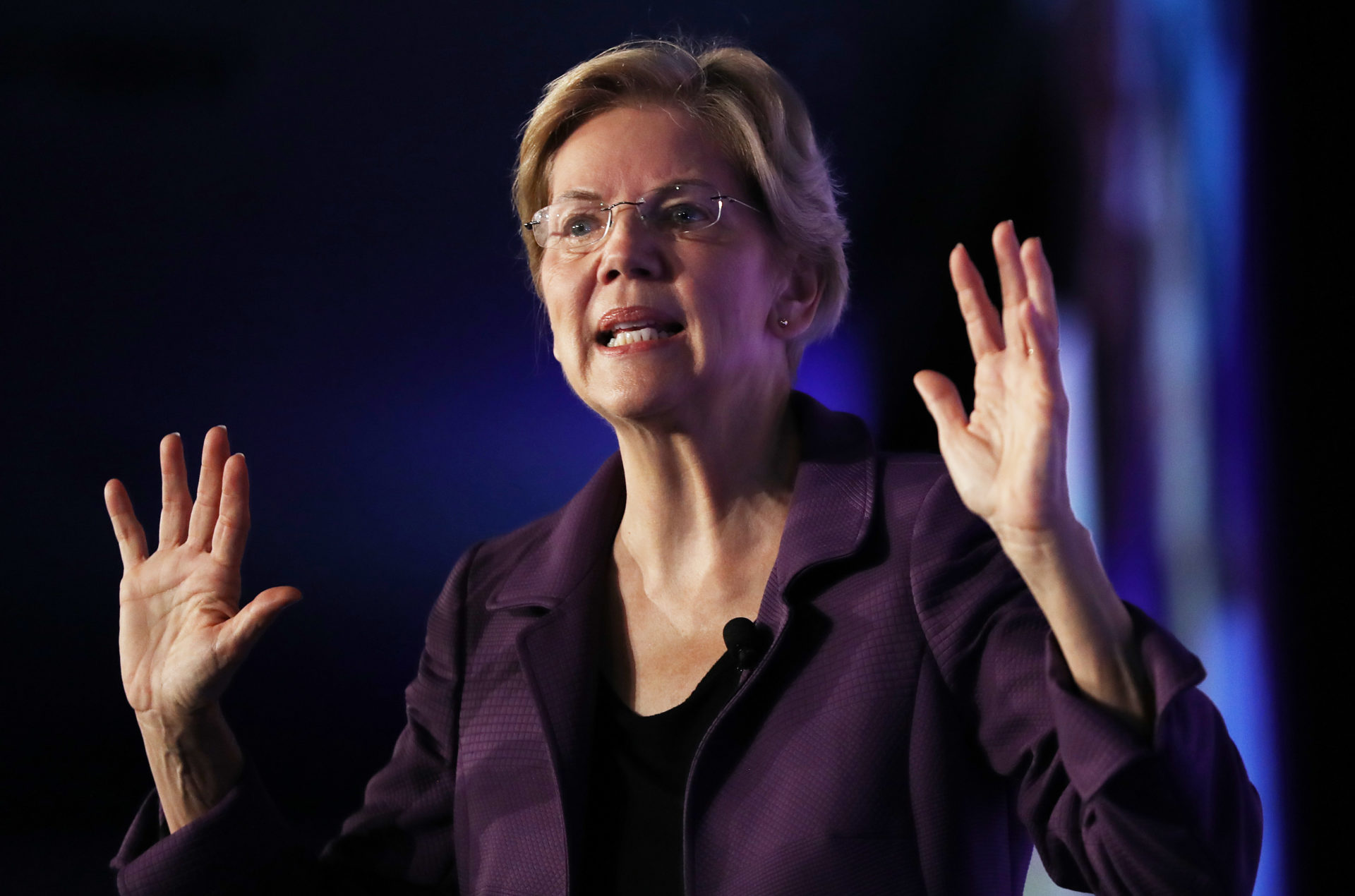 Sen. Elizabeth Warren (D-Mass.) speaks at the SEIU Unions for All Summit on Oct. 4, 2019 in Los Angeles. The Democratic presidential candidate recently released a proposal that would impose a tax on the lobbying efforts of corporations that spend more than $500,000 per year to push the government in favor of their causes. (Mario Tama/Getty Images)
By Matt Bracken

A Morning Consult/Politico survey conducted among 1,991 registered voters from Oct. 7-8 — just days after Warren unveiled her plan — asked voters whether they would support the proposal, which calls for a tax on corporations that spend more than $500,000 per year to lobby the government in favor of their causes. A 49 percent plurality of respondents backed Warren’s plan, while 22 percent said they were opposed. The poll has a margin of error of 2 percentage points. 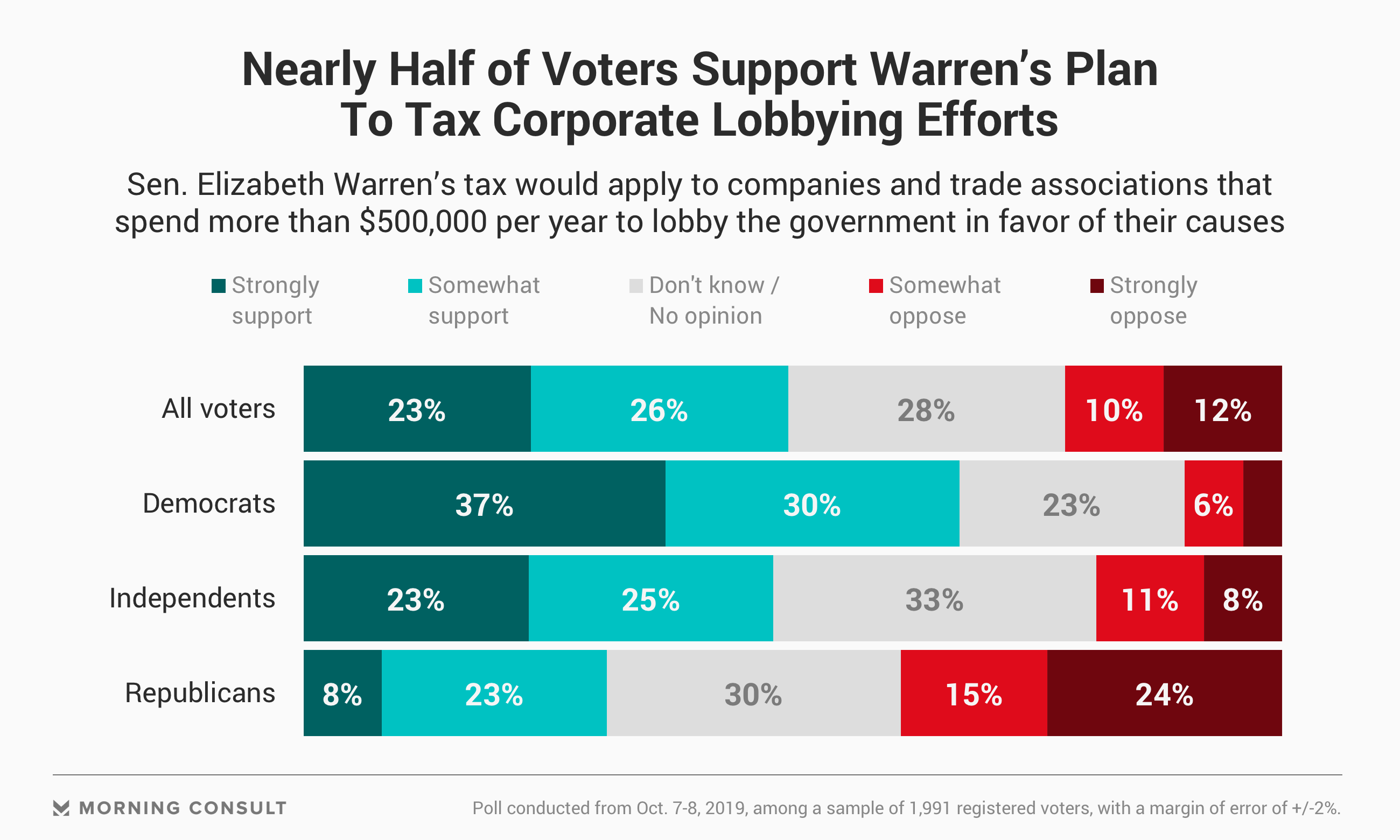 While there was broad support overall for measures targeting government lobbying, the partisan split over the senator’s proposal reflects much of the political reaction to Warren’s plan. Several conservative commentators have questioned whether the proposal violates the First Amendment, which offers constitutional protection for the right to lobby the government to try and affect policy decisions. Many liberal advocates, meanwhile, have applauded the plan as an effective method for reining in what they view as out-of-control lobbying efforts by major corporations and trade associations.

Removing Warren — and the specifics of her plan — from the equation, however, resulted in stronger support across the board for anti-lobbying measures. Asked whether they supported or opposed proposals to limit government lobbying, 3 in 5 voters said they backed such plans.

There was essentially no difference in support for curbing lobbying based on party affiliation: Sixty percent of Republicans said they favored proposals to limit government lobbying, while 59 percent of Democrats and independents said the same.

And most voters agree that lobbying effectively influences politicians, with 52 percent of respondents saying such efforts have “a lot of influence,” while 28 percent said lobbying had “some influence.”

Among Democrats, 83 percent said they think lobbying has at least some influence on politicians, while Republicans (80 percent) and independents (77 percent) aren’t far behind.

Warren’s plan would tax companies that spend between $500,000 and $1 million annually on government lobbying at a 35 percent rate, and escalate to 60 percent on every dollar spent above $1 million and 75 percent on every dollar above $5 million. Warren said the revenues resulting from those taxes would be set aside for federal agencies impacted by lobbying efforts and to fund congressional support resources.

Despite widespread support for general lobbying limitations, many voters were largely unaware of Warren’s plan. Thirty-nine percent of voters said they have seen, read or heard “nothing at all” regarding the proposal, while another 28 percent said their level of awareness of the plan was “not much.”

Related: Why Warren’s Edge Over Sanders Is Likely to Grow
Corporations Tax Policy