Democrats Have High Expectations for Warren Ahead of Fourth Debate

For the first time, Democratic voters expect her to outperform Biden 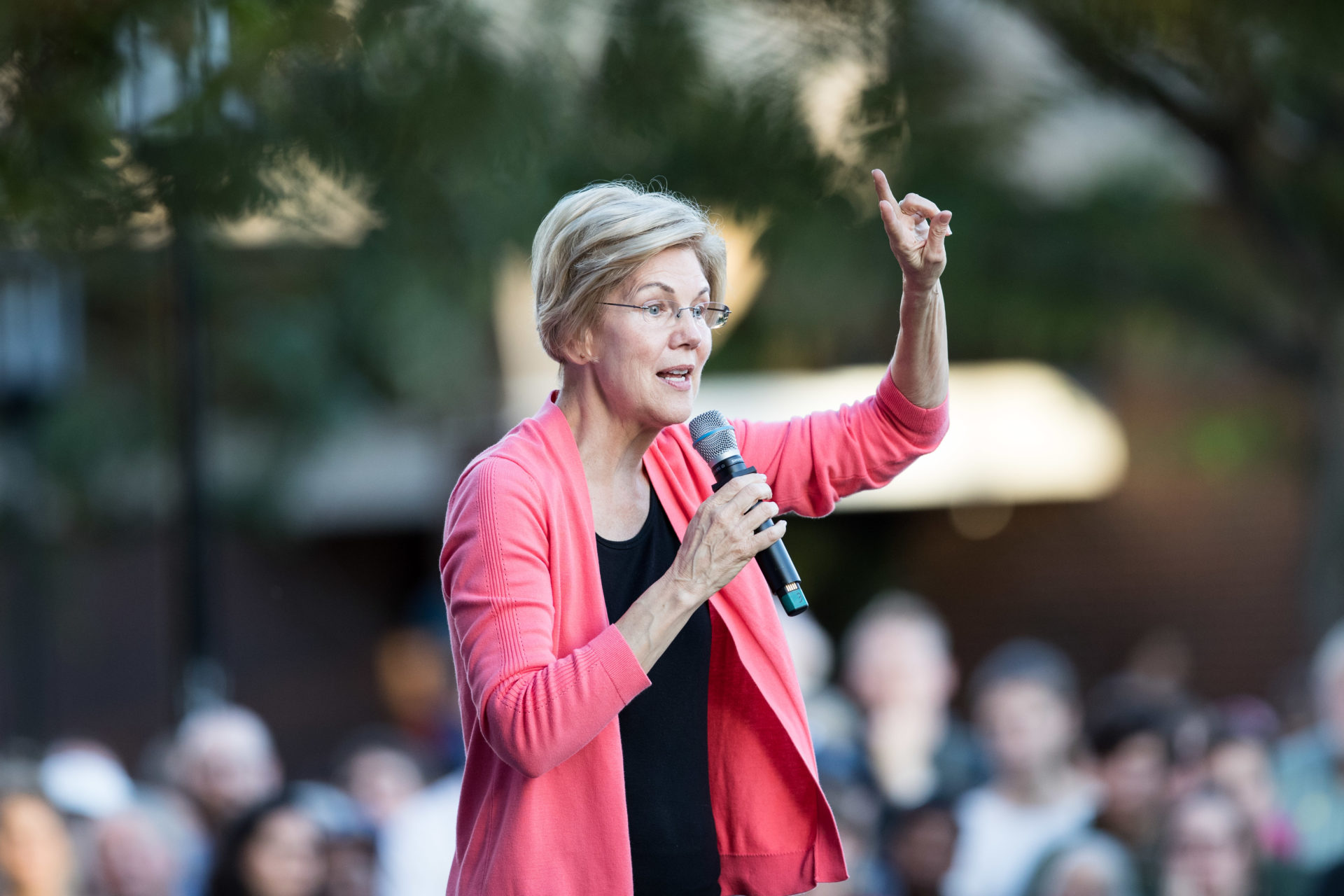 Sen. Elizabeth Warren (D-Mass.) speaks at Keene State College on Sept. 25 in New Hampshire. A new poll finds an 10-point bump in the share of Democratic voters who expect her to perform best at the party's next debate. (Scott Eisen/Getty Images)
By Eli Yokley

Expectations for Sen. Elizabeth Warren are higher than they’ve ever been ahead of Tuesday night’s debate in Ohio, with the Massachusetts Democrat topping former Vice President Joe Biden for the first time on whom voters expect to perform best after rising to second place in the race for the Democratic nomination nationwide.

Twenty-nine percent of Democratic voters in the latest Morning Consult/Politico poll expect Warren to perform best against the other 11 candidates on stage, up 10 percentage points since a poll conducted before the September debate and more than twice the share who expected her to come out on top in polling conducted before the first round of debates in June. 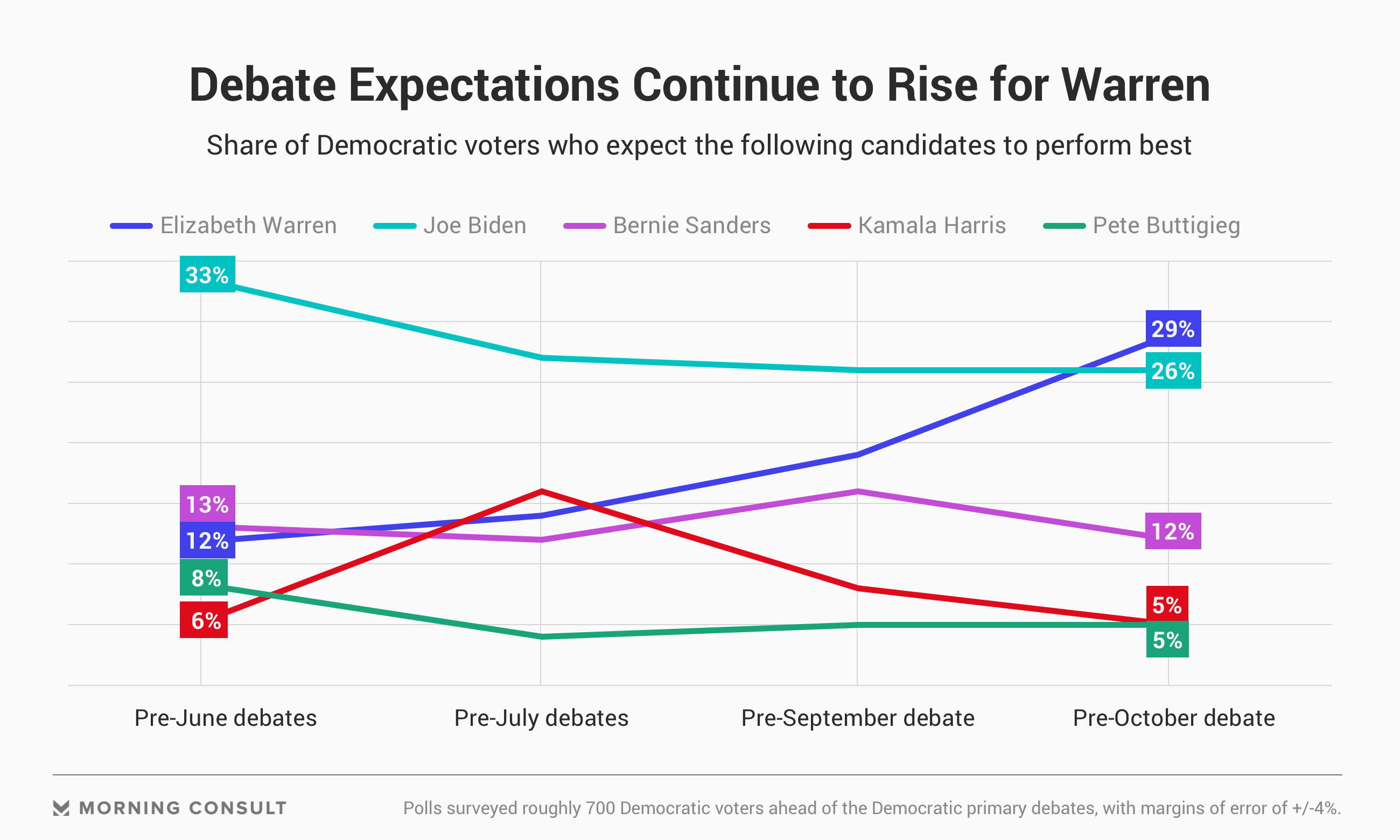 “There is always a danger in high expectations,” said Adrienne Elrod, the former director of strategic communications for Hillary Clinton’s 2016 campaign. “But if past is precedent, Warren will have another steady debate performance. She has a unique ability to present her argument and engage in rebuttals without seeming defensive or going on the attack. And she doesn’t need to rely on debates to propel her in the polls.”

The increase in expectations for Warren is reminiscent of the surge for Sen. Kamala Harris (D-Calif.) following the first debate in June, when she made headlines for dinging Biden’s positions on federal involvement in desegregation bussing and work with segregationists as a senator from Delaware. Harris, too, saw an increase in her share of the first-choice vote after the first debates, but it wore off following the second debates.

But unlike Harris, Warren’s rise among the Democratic electorate has been slow and steady since the early stages of the campaign. She pulled ahead of Sanders last month, but still trails Biden by double digits, 32 percent vs. 21 percent, in Morning Consult’s tracking among Democratic primary voters, mainly due to his strength with black voters.

Related: Why Warren’s Edge Over Sanders Is Likely to Grow

The latest Morning Consult/Politico poll, which has a 2-point margin of error, finds very little change since September in what Democratic voters say is “very important” for candidates to discuss. The top issues remain gun policy (71 percent), the treatment of child migrants detained at the border (67 percent) and climate change (67 percent), which have ranked near or at the top of a list of priorities ahead of the past three debates.

However, amid an impeachment inquiry on Capitol Hill probing President Donald Trump’s conduct with Ukraine, there was an increase in the share of Democratic voters who said it was very important for the candidates to discuss the president from the stage in Westerville, Ohio. Forty-six percent of Democratic voters prioritized discussion of Trump, up 8 points since September and marking a high point for the campaign.

A third of Democrats said it was very important for the candidates to discuss Ukraine.