Kentucky, Louisiana Governors Bolster Their Standing With Voters Ahead of Election Day

Gov. Matt Bevin (R-Ky.) speaks to guests during the NRA-ILA Leadership Forum on April 25 in Indianapolis. Facing re-election next month, Bevin is no longer the least popular governor in the country, according to the latest Morning Consult Governor Approval Rankings. (Scott Olson/Getty Images)
By Eli Yokley

The governors of Kentucky and Louisiana, both on the ballot next month, are heading into the home stretch of their grueling re-election campaigns on the upswing with voters in their states.

According to the latest edition of Morning Consult’s quarterly Governor Approval Rankings, based on nearly 534,000 responses from registered voters collected July 1 through Sept. 30, Kentucky Republican Matt Bevin remains underwater, with 34 percent of Kentucky voters approving of him and 53 percent disapproving. But his net approval — the share of voters who approve of his job performance minus the share who disapprove — increased 5 percentage points since the second quarter of 2019.

The improvement was enough to lift Bevin out of his spot as America’s least popular governor, a distinction that now goes to Rhode Island Democrat Gina Raimondo. 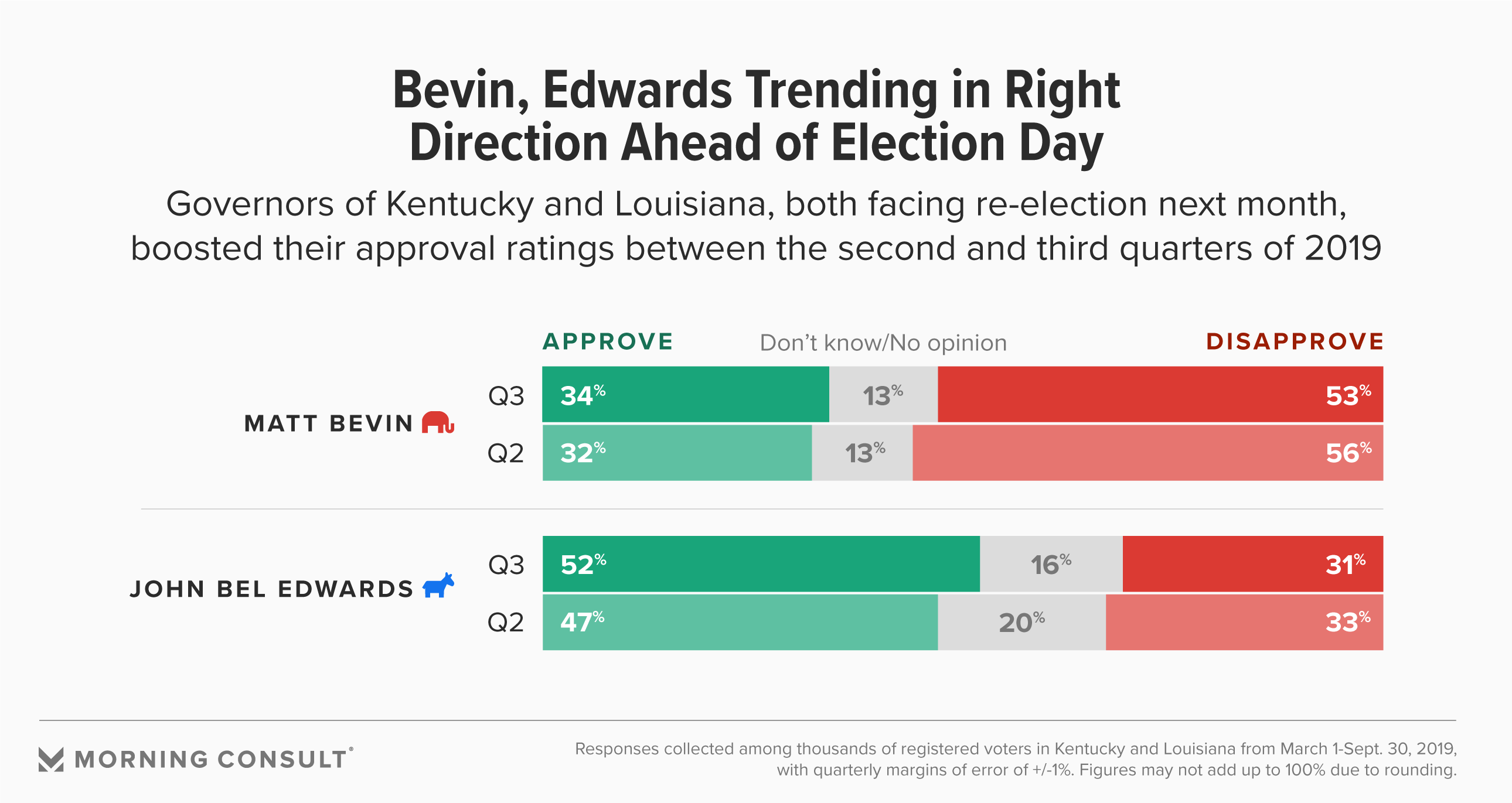 Bevin’s Democratic opponent, Attorney General Andy Beshear, has worked to capitalize on the incumbent’s unpopularity, calling him a “bully” on the campaign trail and pointing in particular to the governor’s criticism of teachers, a constituency whose respect in local communities is viewed as key to a potential Beshear win on Nov. 5.

Bevin, on the other hand, is trying to make the contest about issues that tend to animate the Republican base across the country, such as gun rights and abortion.

“They can be called national issues, but they are near and dear to the people of Kentucky,” Bevin said at a gubernatorial debate Tuesday night.

Bevin has also played up his ties to President Donald Trump, who at 53 percent approval among Kentucky voters is significantly more popular than the governor. Trump is expected to campaign with Bevin in Kentucky at an election-eve rally.

“This race isn’t about the White House, it’s about what’s going on in your house,” Beshear said during Tuesday’s debate.

Related: Bevin, Most Unpopular Governor in the Country, Stakes His Re-Election on Trump

In Louisiana, Democratic Gov. John Bel Edwards may have come up short in the state’s jungle primary this past weekend, but ahead of a Nov. 16 runoff against Republican businessman Eddie Rispone, Morning Consult data finds him in a commanding position.

Edwards’ net approval improved by 7 points since the second quarter, with 52 percent of voters approving and 31 disapproving. Half of Louisiana voters who identify as independent approve of Edwards, as well as 71 percent of Democrats and 38 percent of Republicans.

In the Oct. 12 primary, Edwards earned 47 percent of the vote, compared to the combined 51 percent split by Rispone and Republican Rep. Ralph Abraham, both of whom Trump campaigned for last week.

Correction: A previous version of this story misstated the approval and disapproval ratings for Bevin.