Sen. Joni Ernst (R-Iowa) delivers remarks during a weekly Capitol Hill news conference on June 25. The latest Morning Consult Senator Approval Rankings found that the senator, who is up for re-election next year, suffered the biggest drop in net approval between the second and third quarters of 2019. (Tom Brenner/Getty Images)
By Eli Yokley

The most vulnerable Republican senators are not improving their standing in their home states ahead of a tough 2020 election cycle, while the field of potential Democratic challengers took shape and began to flex its muscle.

According to Morning Consult’s latest quarterly Senator Approval Rankings based on nearly 534,000 responses from registered voters collected July 1 through Sept. 30, Republicans representing Colorado, Arizona, North Carolina, Maine and Iowa all saw their net approval — the share of voters who approve of a senator’s job performance minus the share who disapprove — decline between the second and third quarters of 2019. 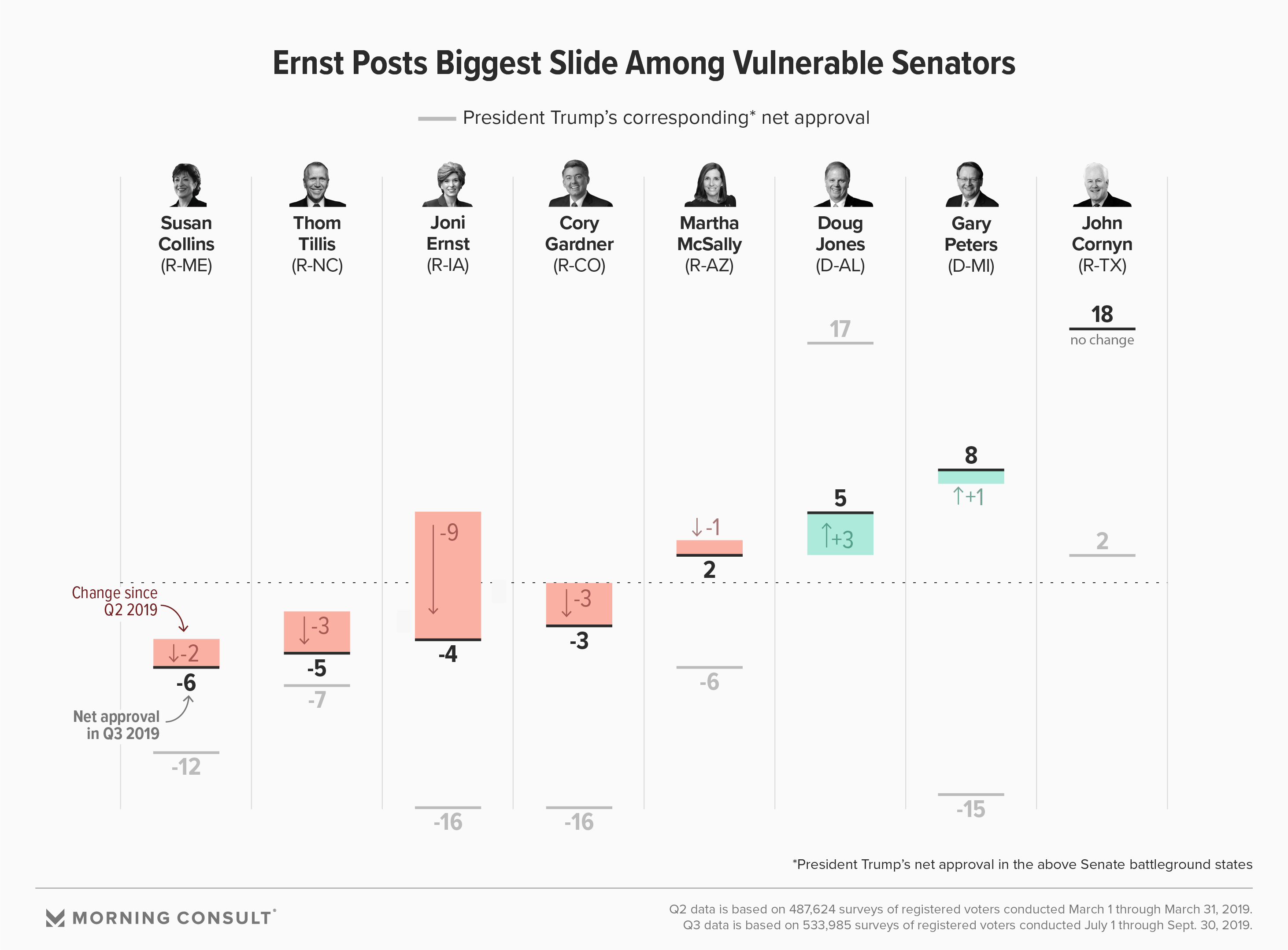 Iowa Sen. Joni Ernst, who has already faced a cascade of negative advertising, saw a drop of 9 percentage points — the biggest decline in net approval for any senator. The slide places her underwater with Iowa voters (39 percent approve and 43 percent disapprove) for the first time and among the 10 most unpopular senators in the country.

Iowa voters of all partisan leanings soured on the first-term senator, but GOP voters were most likely to take a dimmer view of her job performance. Her net approval dropped by 13 points among Republicans, compared with respective 9- and 7-point drops among Democrats and independents.

Ernst is not the only Republican up for re-election next year with a home-state approval below 40 percent: Among the vulnerable incumbents, Martha McSally of Arizona, Cory Gardner of Colorado and Thom Tillis of North Carolina are all below that threshold following a quarter where each saw little movement.

The latest figures come as Democrats in Washington have touted the third-quarter fundraising success of the party’s candidates.

But that doesn’t mean things are settled.

Greenfield, who is running in a state where Democrats’ attention is glued to the first presidential caucuses in February, is facing Democratic challengers in June, including Michael Franken, a retired Navy admiral who launched a campaign commercial this week aimed at Democratic voters that criticizes Ernst for her position on the House’s impeachment inquiry into President Donald Trump.

Despite Hickenlooper’s fundraising advantage, some Democratic candidates vying for the nomination to take on Gardner are continuing their campaigns despite the former two-term governor’s entry into the race after he dropped his presidential bid. And in North Carolina, Cunningham faces primary challengers, and his Republican and Democratic critics alike note that he has lost a high-stakes Senate primary before.

Martha McKenna, a Democratic strategist who led the DSCC’s independent expenditure program in 2012, 2014 and 2018, said that aside from being a show of force against Republicans, the candidates’ early fundraising strength gives them the chance to deliver a positive message about themselves to voters, “not something we always have the resources to invest in.”

“You see it not just in the Senate candidates hitting their mark and doing really well in fundraising and building the grassroots, but you also see it in how shaky these incumbents are,” she said, noting Republican senators struggling to grapple with the impeachment inquiry. “They’re rattled and that’s because they are candidates running in a treacherous political environment.”

As split-ticket voting continues to decline, the latest rankings show Trump continues to be a drag on Republican incumbents. In Arizona, Colorado, Georgia, Iowa, Maine, North Carolina and Texas, Trump’s net approval with registered voters is worse than that of the incumbent Republican, by double digits in several cases.

In two states where Democratic incumbents are on the defense this cycle, the picture is less clear.

Alabama Sen. Doug Jones saw his net approval improve by 4 points, with 41 percent of voters approving of him and 36 percent disapproving. However, Trump is still vastly more popular than the former U.S. attorney who has stuck with Democrats on pivotal decisions — such as his “no” vote on the confirmation of Supreme Court Justice Brett Kavanaugh — ahead of re-election in a deeply red state.

Sen. Gary Peters (D-Mich.) remains America’s least-known senator, with 37 percent of Michigan voters saying they don’t know or have no opinion about him. The figure has dropped 7 percentage points since the first quarter as both his approval and disapproval ticked up to 36 percent and 28 percent, respectively. Despite a relatively low awareness among his constituents, Peters can take solace in Trump’s numbers in the state, where 55 percent disapprove of the president.

“If things go south for the president, replacement-level recruits aren’t going to matter,” said Liam Donovan, a former finance strategist at the National Republican Senatorial Committee. “If Trump wins four more years, even the best Democratic candidates would have a difficult time competing.”

But that cuts both ways, Donovan said, and “Democratic recruits will have to contend with the strengths and weaknesses of their own standard bearer.”