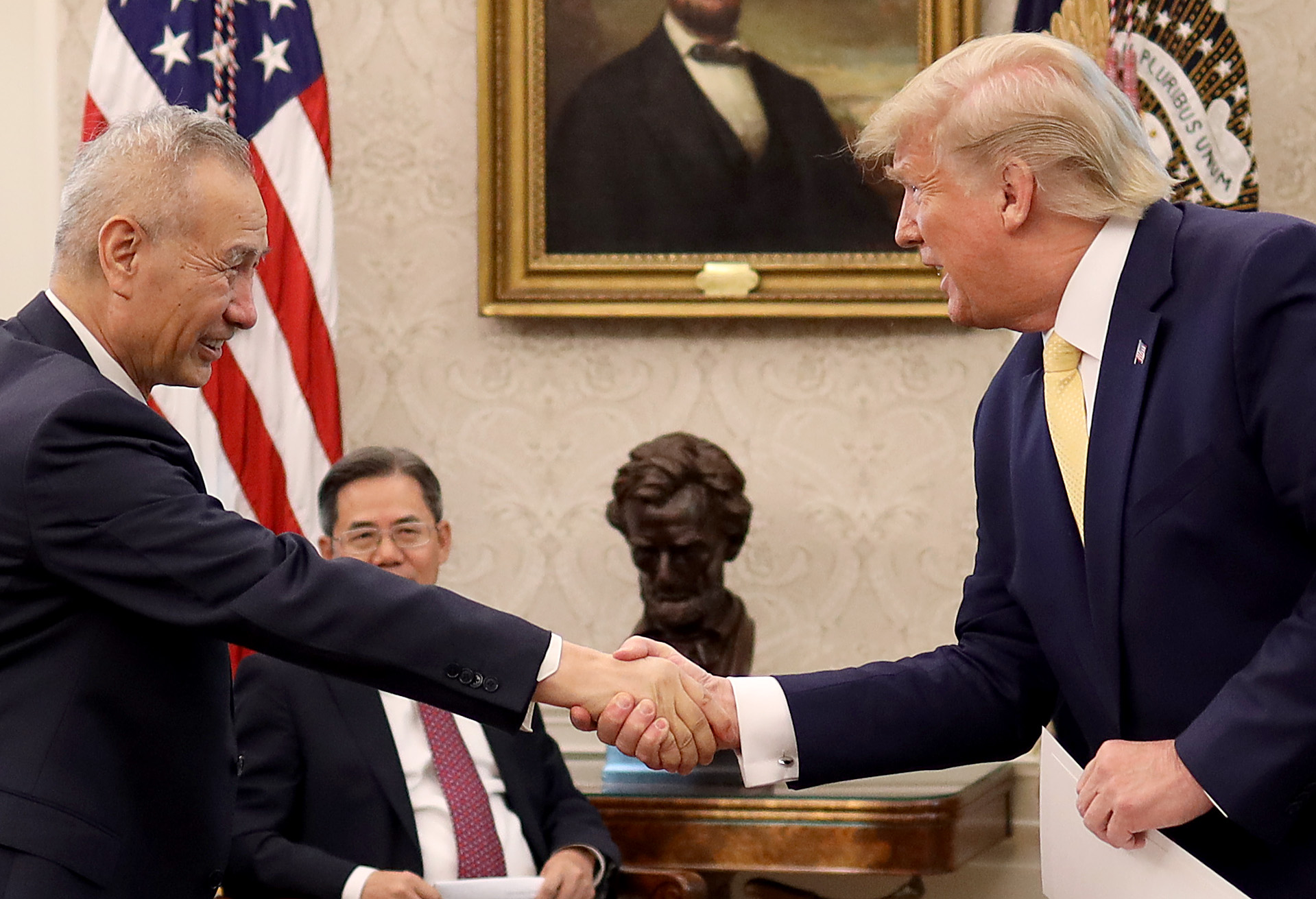 President Donald Trump with Chinese Vice Premier Liu He after announcing a "Phase One" trade agreement with China on Oct. 11 in Washington. The announcement did little to reassure consumers, according to Morning Consult Economic Intelligence data. (Win McNamee/Getty Images)
By Matt Bracken

A proposed “Phase 1” trade deal between the United States and China has barely moved the needle on consumer attitudes about the economy, according to new Morning Consult Economic Intelligence data, with a slight drop in consumer expectations suggesting that the interim tariff agreement President Donald Trump announced Oct. 11 did little to assuage concerns about the economic fallout from a prolonged trade war.

Morning Consult’s consumer sentiment index is based on answers to questions about personal finances, personal financial outlook, attitudes toward the purchase of household durable goods and business conditions in the country over the next year and over the next five years. It has been relatively stable since hitting a 52-week low of 104.5 in January in the aftermath of the government shutdown, but has trended down over the past month. 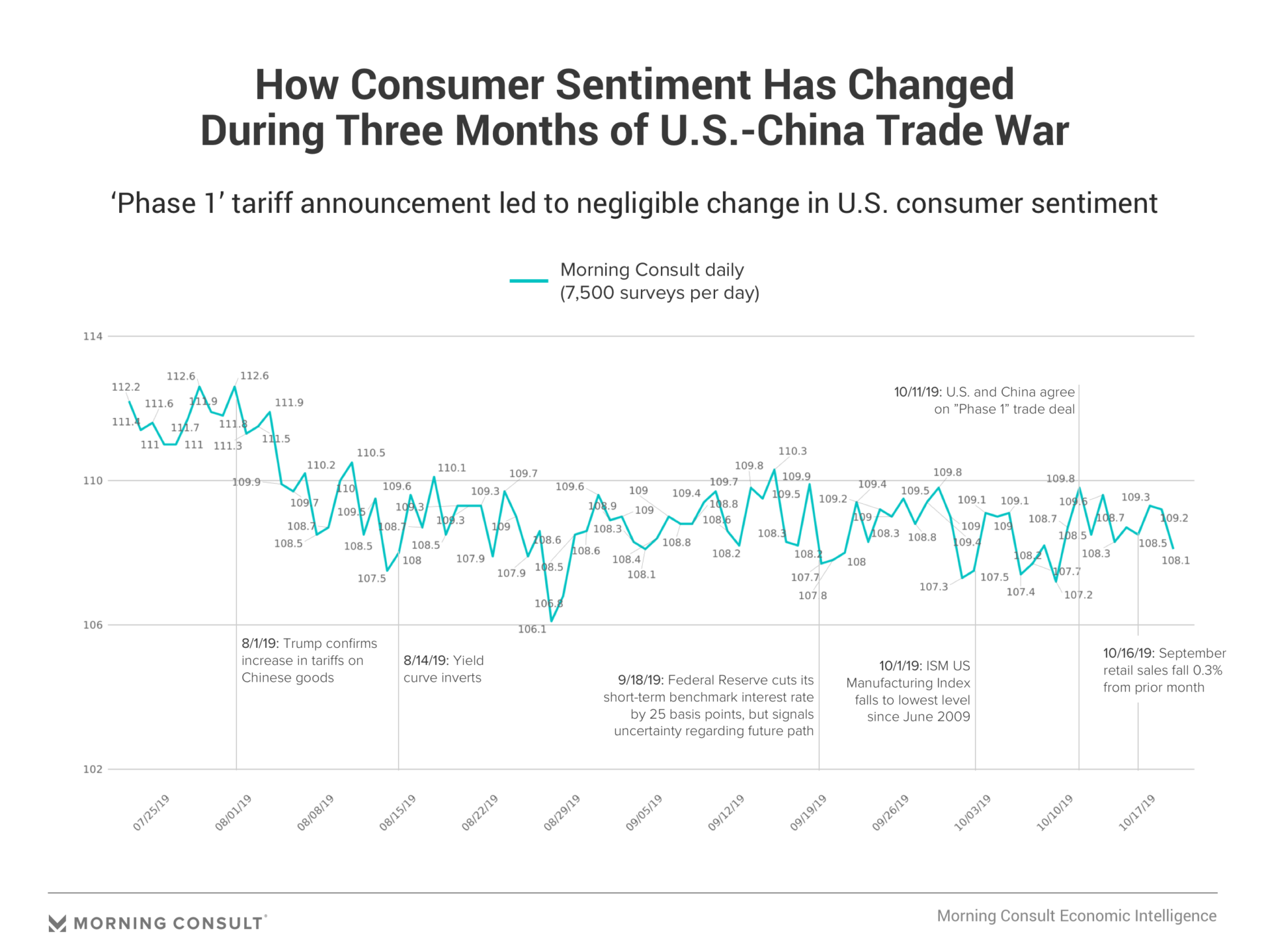 John Leer, senior director for Morning Consult Economic Intelligence, noted that “there was a pretty clear and strong fall in consumer sentiment” after Trump’s Aug. 1 announcement of tariffs on $300 billion worth of Chinese goods. The lack of detail and finality surrounding the “Phase 1” agreement announced this month could explain why consumer sentiment and expectations remained largely unchanged, Leer said.

If nothing happens, Leer said, the tariffs will still go into effect as planned on Dec. 15. “I think for that reason, consumers are rightly skeptical,” he noted.

Since the news of a possible breakthrough in U.S.-China trade talks on Oct. 11, Leer said there has been no clear or consistent increase among any consumer group or demographic — but that agricultural workers’ steadfast skepticism offers a relevant contrast to the lack of movement from specific industries after Trump’s announcement.

Related: Roughly Half of Trump Voters Would at Least Partially Blame Him for a Recession

“Farmers have remained skeptical throughout this whole process,” Leer said, adding that the announcement had very few details regarding a timeline for China to resume buying U.S. agricultural products.

“Last week, farmers were skeptical, and the wealthy, the stock market investors, had this sort of euphoria,” he said. “This week, the euphoria has worn off, and Wall Street has come back to recognize the wisdom of the farmers.”

The Morning Consult Index of Current Conditions is a simple average of the relative scores of two questions: Are you better or worse off financially than you were a year ago, and do you think now is a good or bad time for people to buy major household items? The latest reading is 108.8, up from 108.2 the prior week.

A small but widening gap between the Index of Consumer Expectations and the Index of Current Conditions offers a potential warning sign, Leer said, with all age and income groups saying that their personal financial status will worsen 12 months from now.

That consensus is “something new,” he said. “In the past, we’ve seen people’s expectations really differ. This time, for the first time in a couple weeks, everybody is feeling that 12 months from now, they are not going to be earning as much money.”

In the weeks ahead, Leer said, consumer attitudes could be shaped by a number of developments, including the Federal Reserve meeting next week, the potential for a signed U.S.-China trade deal next month and the ability of the upcoming holiday shopping season to support labor markets.