Despite its status as a top-tier issue, moderators in Oct. 15 debate posed no climate questions

Suzannah Mullen holds a sign at a Greenpeace rally to call for a presidential campaign climate debate in front of the Democratic National Committee headquarters on June 12, 2019, in Washington, D.C. (Sarah Silbiger/Getty Images)
By Jacqueline Toth

Reflecting on a debate bereft of any climate change questions, most Democratic primary voters said there was insufficient discussion of the topic at the party’s Oct. 15 face-off in Ohio, according to a new Morning Consult/Politico poll.

Fifty-six percent of registered voters who indicated they may vote in the upcoming Democratic primary or caucus in their state and watched the CNN/New York Times-hosted debate in Westerville said it did not contain enough climate talk. The sample has a margin of error of 6 percentage points. 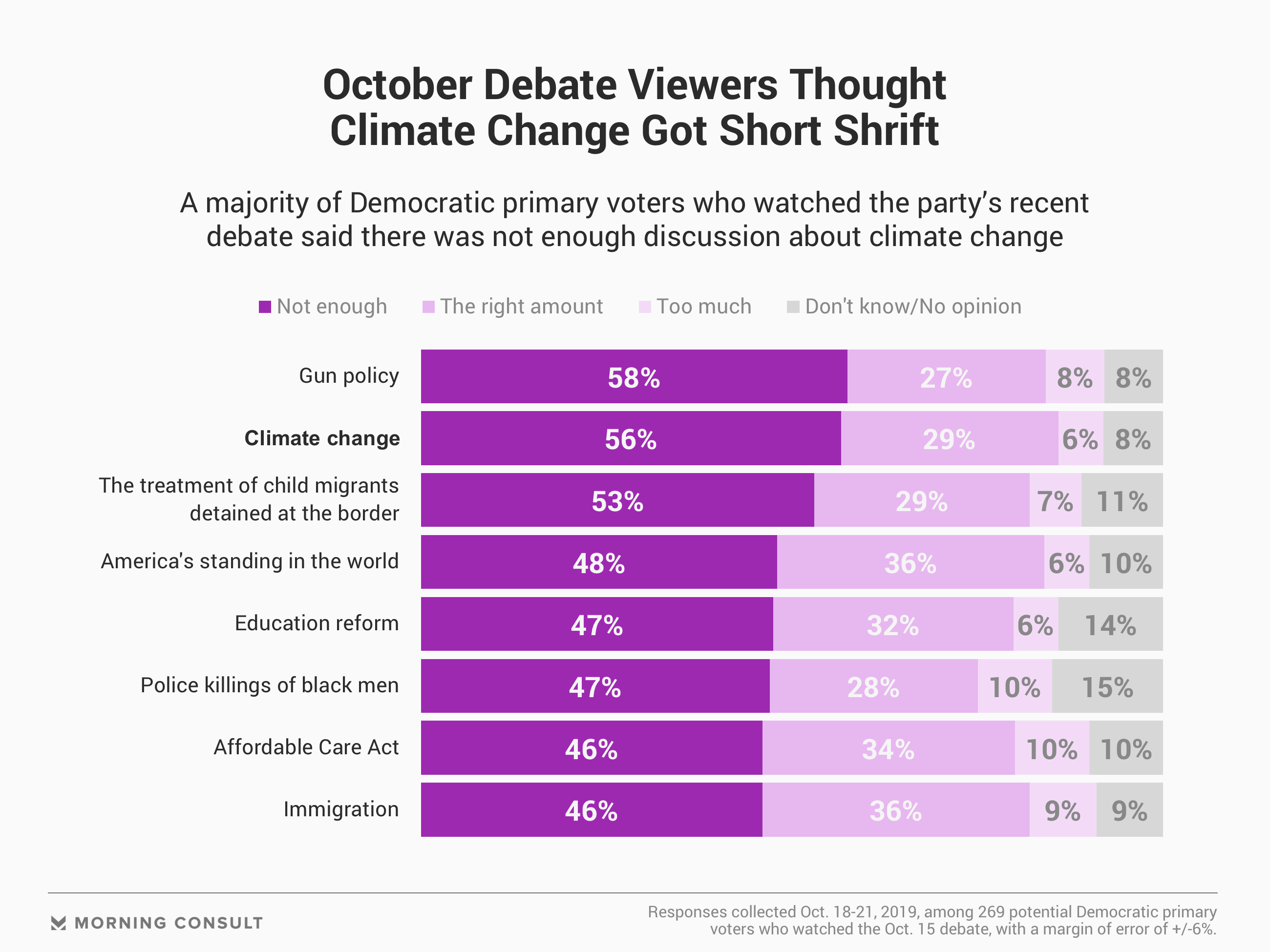 In the Oct. 18-21 poll, 6 percent said that there was too much discussion of climate change at the debate, while 29 percent said the topic received the right amount of attention.

Mentioning global warming at the debates makes a lot of sense for Democratic candidates: Among the major party affiliations, Democrats are the most concerned about climate change. A June 13-17 poll of 2,200 adults found that 45 percent of Democrats consider climate change a crisis, compared to 26 percent of independents and 8 percent of Republicans.

Morning Consult/Politico polling has also found that across multiple surveys, climate change is one of the top three issues that Democratic voters have consistently identified as “very important” to see addressed during the events.

Environmental groups have fruitlessly pressed the Democratic National Committee for months to hold a climate-focused debate. But in August, the DNC voted against allowing the candidates to take part in single-issue debates. Ten contenders participated in a seven-hour climate change town hall on Sept. 4 but appeared individually, not together.

There will be more opportunities for Democratic candidates to display their chops on the topic: The Weather Channel announced its intention to run a 1-hour pre-recorded special featuring interviews with nine 2020 candidates, including three Republicans, on climate change.

The DNC has set the next multi-candidate Democratic debate for Nov. 20 in Georgia.