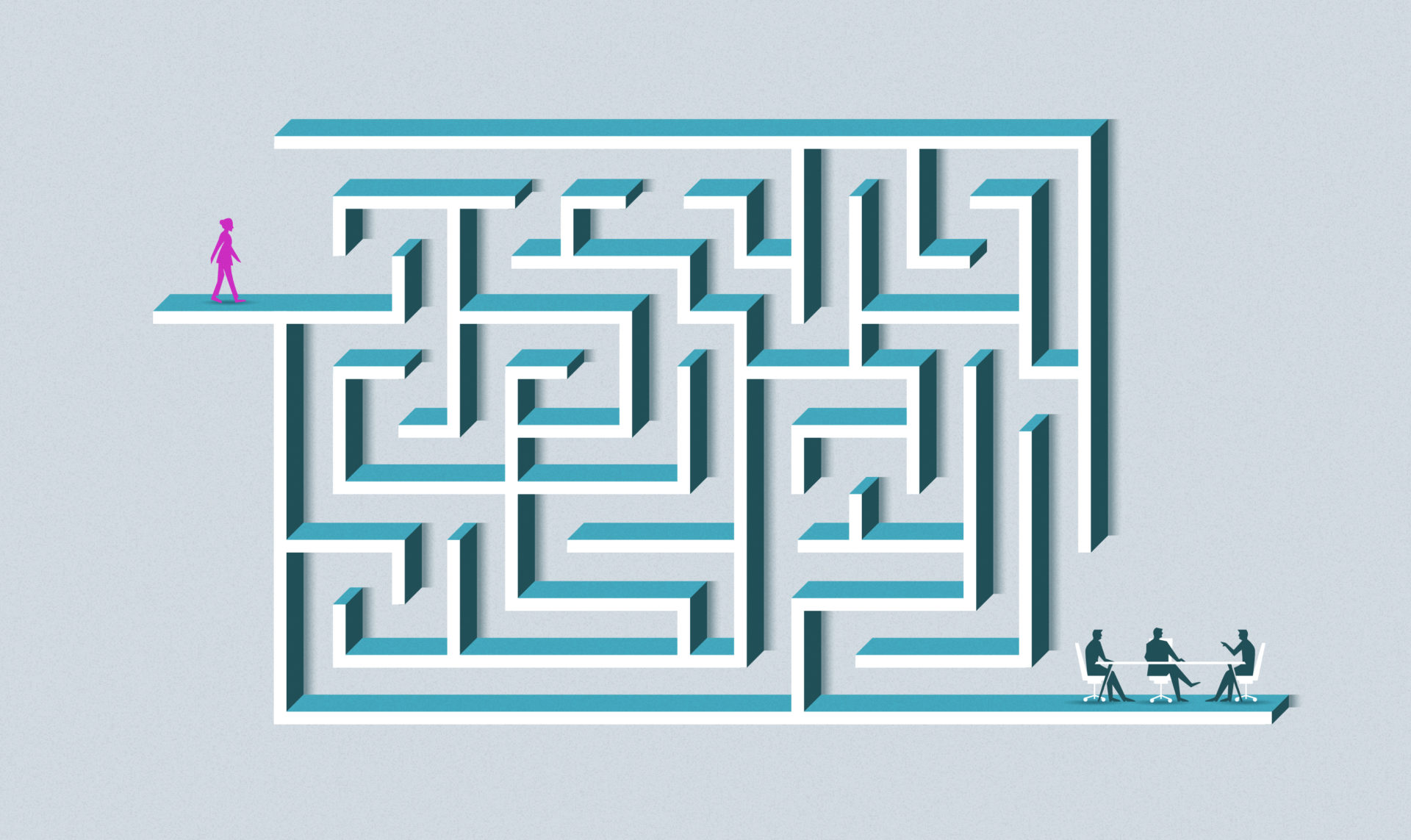 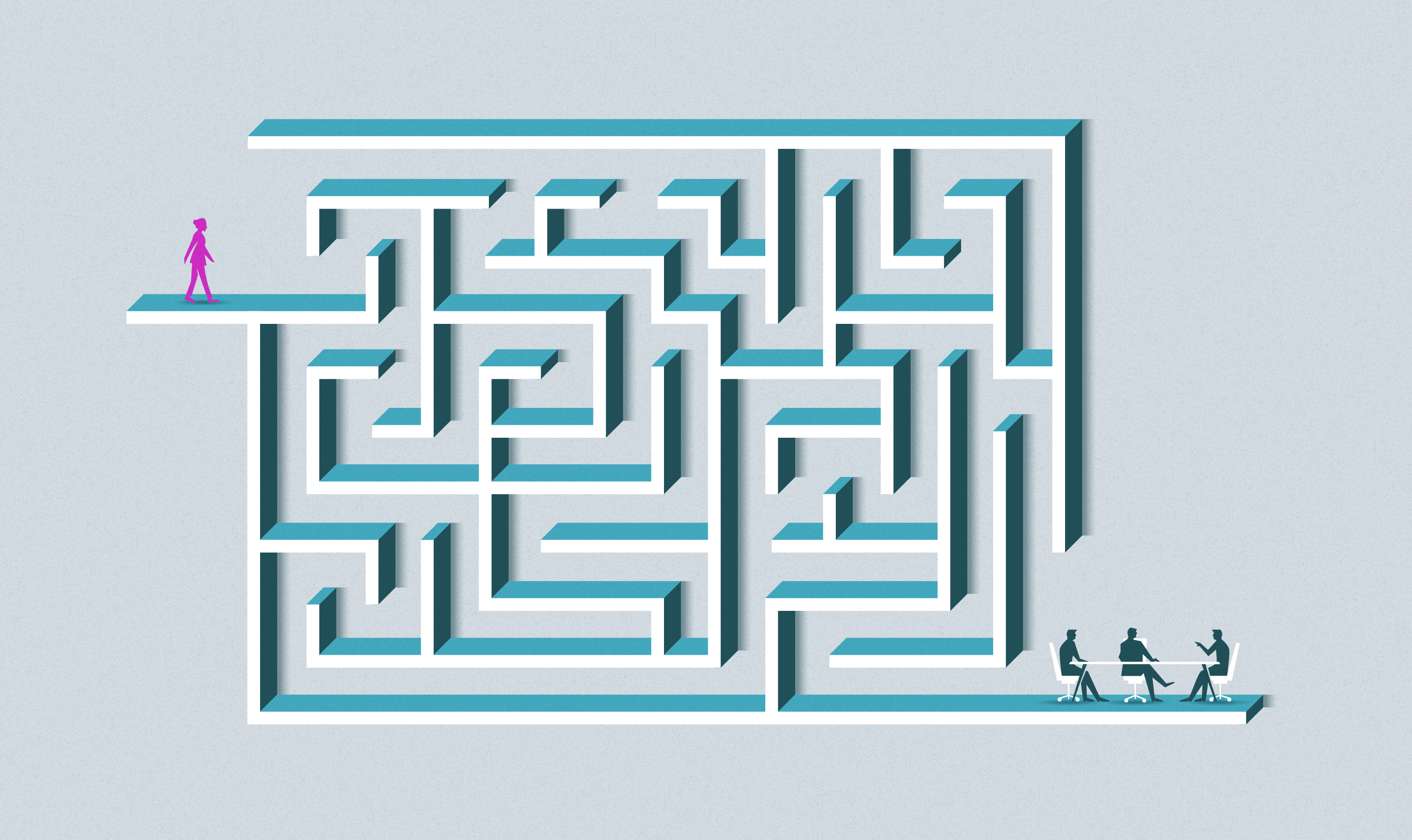 The #MeToo movement has spotlighted the sexual harassment and assault that countless women face in the workplace. But new polling reveals that many men reject the notion that women face subtler challenges in their professional experience, much of which stems from societal norms involving domestic labor that serve as a barrier to their career advancement.

“That is still the biggest problem that women face with advancement — that they still face more pressure at home,”  said Melissa Deckman, a public affairs and political science professor at Washington College, who said adherence to traditional gender norms is peeking through much of the survey data.

The new Morning Consult/ASCEND poll, conducted in partnership with Prudential Financial Inc., also unpacks how major life events, such as getting married or having children, impact workers’ professional goals and how that varies by gender and race. Analysis also reveals that the youngest generation is mostly holding on to gendered definitions of success.

Previous Morning Consult polling found gaps between men and women in both awareness of workplace gender inequality and desire to move up the professional ladder.

To dive a little deeper into each of these divides, Morning Consult asked the public whether a number of statements about gender inequality in the workplace were more of a myth or a reality — and pinpointed which exact life moments push people forward, or backward, in their professional lives. 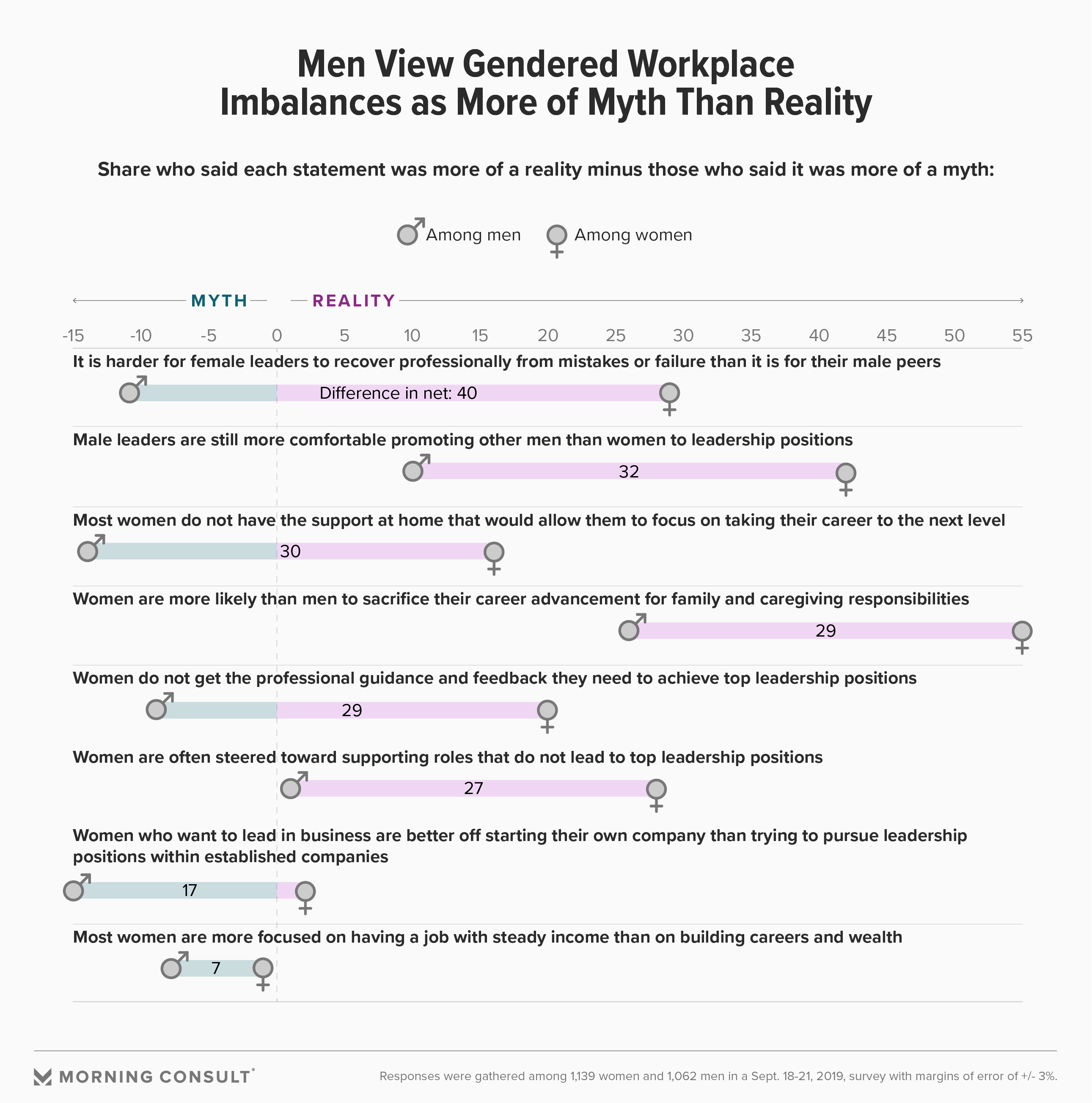 Men and women rarely see eye to eye on statements describing what many women experience at work, with men more likely than women to view each as more of a myth than a reality.

Ruti Levtov of Promundo-US, a nonprofit that promotes gender equality, said these gaps in perception have a ripple effect.

Men who don’t believe that women face unique challenges or lack the support they require are unlikely to step up and facilitate change, she said. Without such basic needs as acknowledgement, recognition or autonomy, Levtov said it is easy for many women to become disengaged in the workplace, hurting a company’s bottom line.

It can also lead to turnover, according to gender experts, with many women simply opting out or choosing another professional path of less resistance when faced with challenges that are invisible to their coworkers and, oftentimes, themselves.

The country’s recent focus on gender equality amid the #MeToo movement could also be affecting attitudes here, said Stefanie K. Johnson, an associate professor at the University of Colorado Boulder’s Leeds School of Business. Pre-#MeToo, workplace inequality was not the topic of discussion that it is today, she said, and now many colleagues’ views and assumptions are being challenged.

“Rather than having an open mind,” Johnson said, “people will actually thicken their shields more because they don’t want to be wrong.”

These survey statements are also all written from a female point of view, and experts said it’s difficult for anyone to accurately evaluate something from another’s eyes, possibly explaining some of the differences in attitudes.

However, some perception gaps concerning the work-life balance of women continue to crop up in the survey. 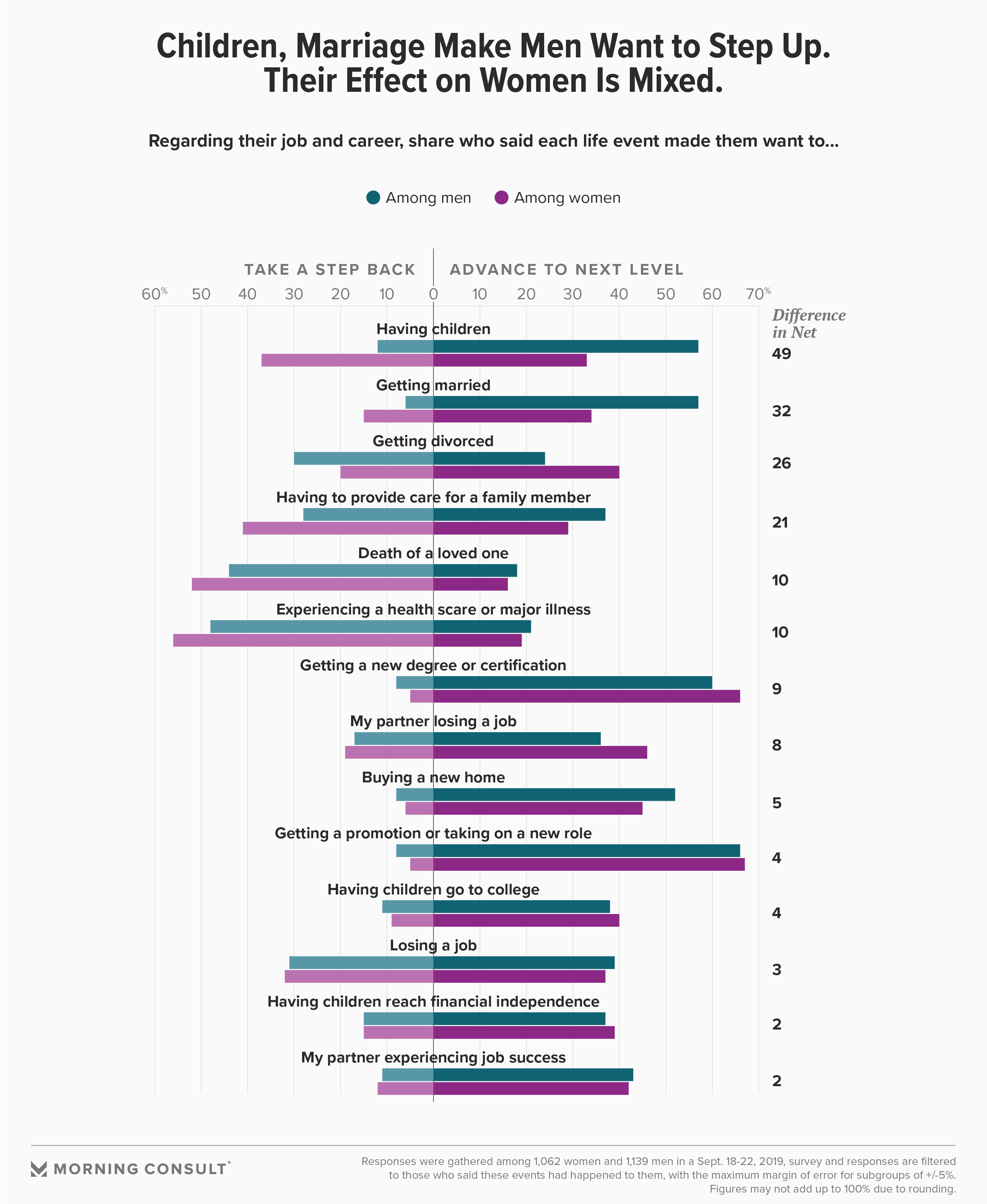 The data suggests that both men and women are still adhering to stereotypical gender roles when it comes to life events and the impact that those events have on professional aspirations.

Women were more likely than men, for example, to say having children made them want to take a step back professionally instead of advancing to the next level.

Women continue to feel pressure, whether external or internal, to take on most of the caregiving, Deckman said. And while governmental and corporate parental-leave policies have the potential to help, experts said, women can’t relieve that pressure on their own.

“We still have these persistent gendered expectations and values in society, and I’m not sure if corporations can fix that,” Deckman said.

Men were more likely than women to say marriage made them want to step up professionally. Divorce had the opposite effect, which experts attributed to gendered views of the union: While men view marriage as having to support someone financially, women still tend to view it as supporting someone emotionally. 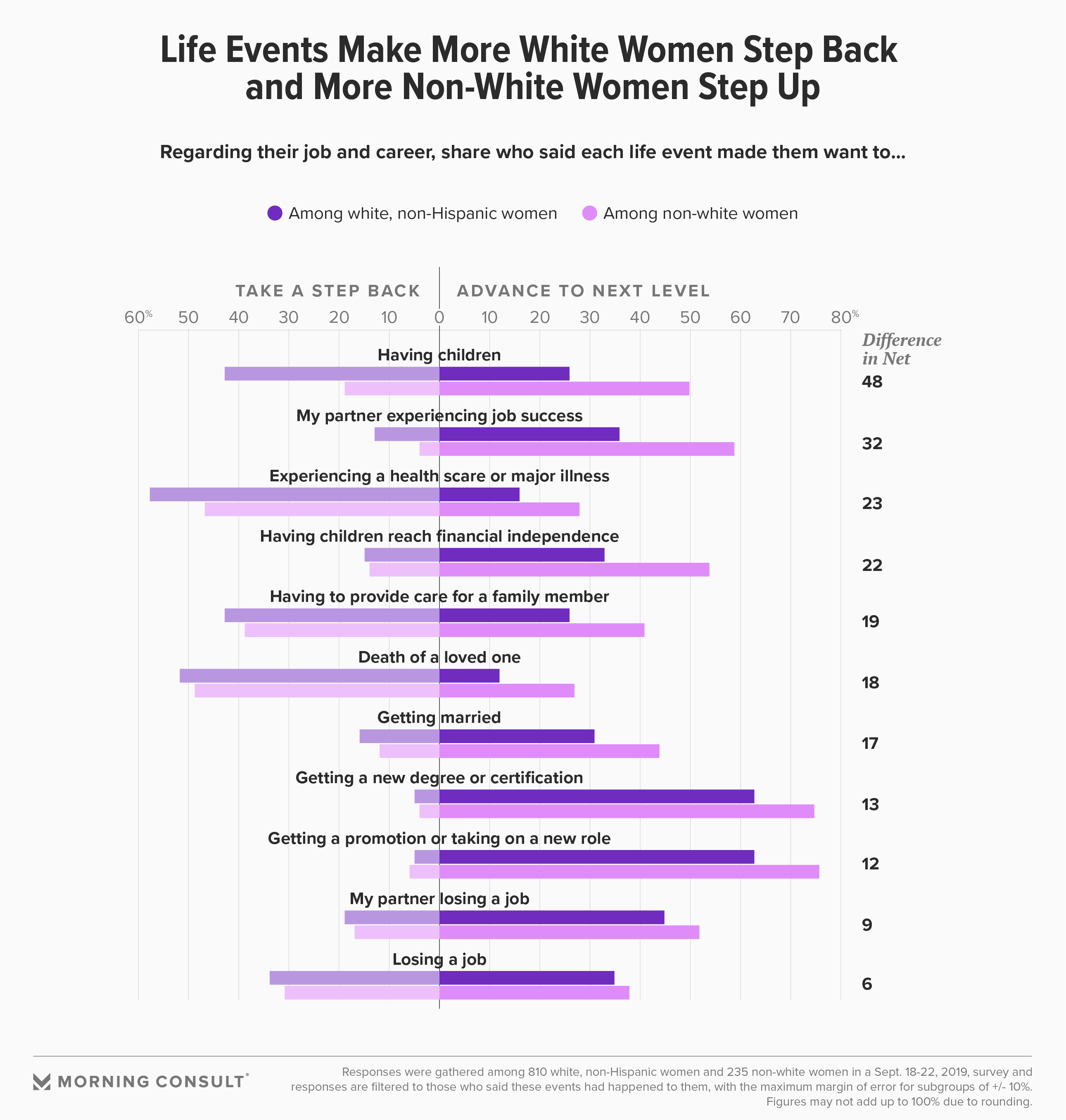 On every metric tested, non-white women — those who identified as Hispanic, black, Asian or another race or ethnicity — were more likely than white women to say life events made them want to step up in their careers. (Specific race by gender could not be analyzed due to small sample size.)

“Oftentimes, women of color have fewer resources and don’t have the option of stepping back,” said Kim Keating, a board member of Sheryl Sandberg’s Lean In organization and chief human resources officer for The Y in Central Maryland.

Three of the top five events that created the largest divides between white women and non-white women had to do with children, reflective of the additional responsibility many from the latter group have to take on: Black and Hispanic mothers are more likely than white mothers to be the sole breadwinner in their family, according to a recent Center for American Progress report based on 2017 data. 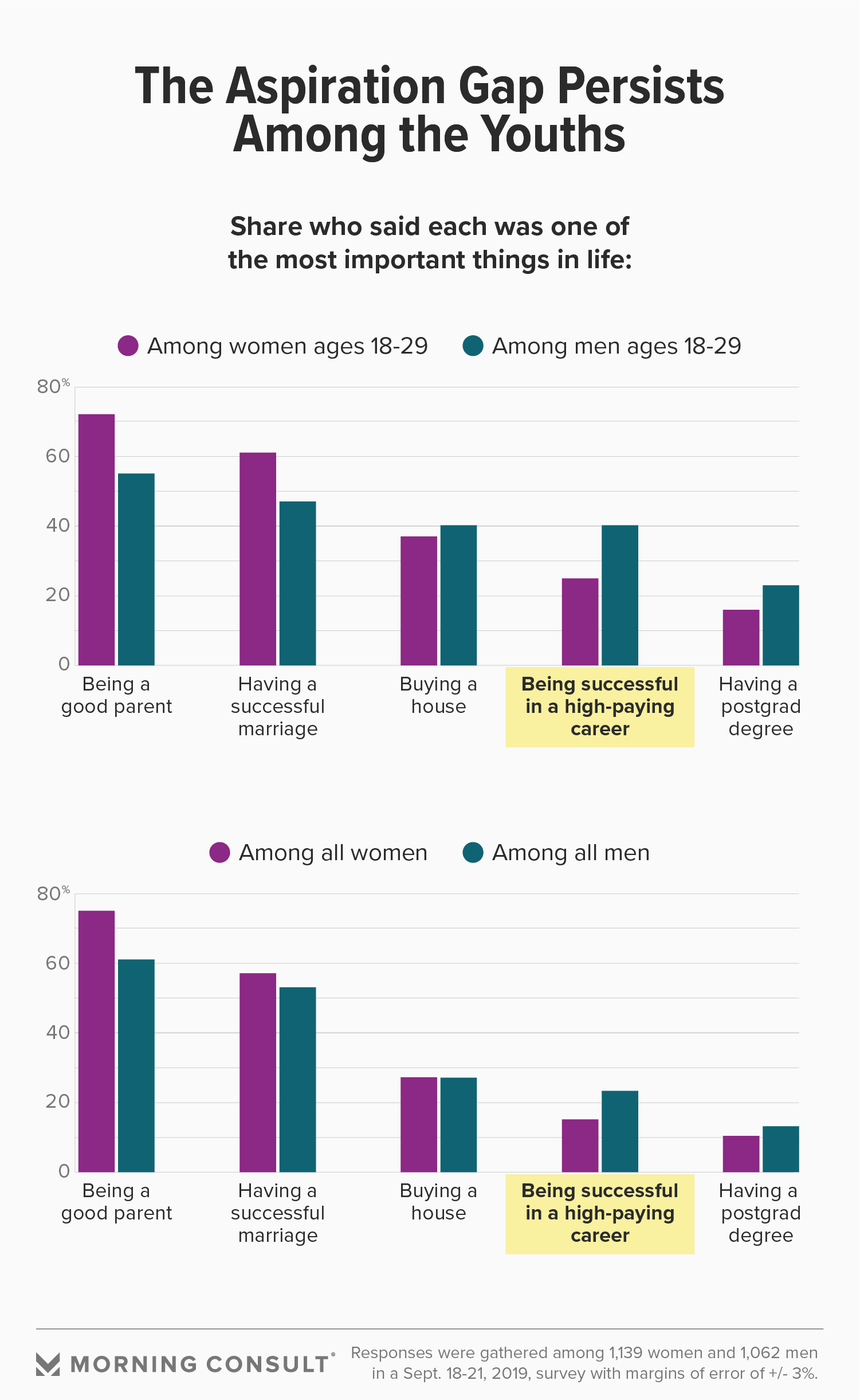 The survey also underscores just how entrenched gendered definitions of success are in American society, persisting in the youngest generation, which holds similar life goals as older adults.

Men ages 18 to 29 are 1.6 times more likely than their female counterparts to say that being successful in a high-paying career is one of the most important things in life, roughly the relationship between all men and all women on the survey question.

While majorities of young men and women placed value on good parenting, young women were 17 points more likely to say it’s one of the most important things in life. Young men placed a successful marriage and a successful career on similar footing, but a 36-point gap exists between the two for young women — with marriage being more of a priority.

“Success for men and success for women is still gendered in a lot of ways,” Deckman said of these lingering nods to traditionalism in the youngest adults.

That’s not to suggest that younger generations view things exactly as other adults, Levtov of Promundo-US said.

“As much as these ideas are really deeply entrenched, they’re also changed a lot over time,” she said. Young women, for example, are 10 percentage points more likely than women overall to say that success in a high-paying career is one of the most important things in life — and these attitudes could shift more with time.

Related: Sisterhood in the Workplace Only Goes So Far When It Comes to Perceptions of Pay

There’s also work to be done in framing caregiving and labor at home as less of a burden that must be shared, Levtov said, and more of a benefit that can be gained via meaningful connections men can make.

“I think once you start framing it from that perspective, it helps bring about more change,” she said.

Women need to step up for other women, as well. Top female executives should work to carve a path for younger generations, said Caroline Feeney, CEO of Prudential Financial’s Individual Solutions.