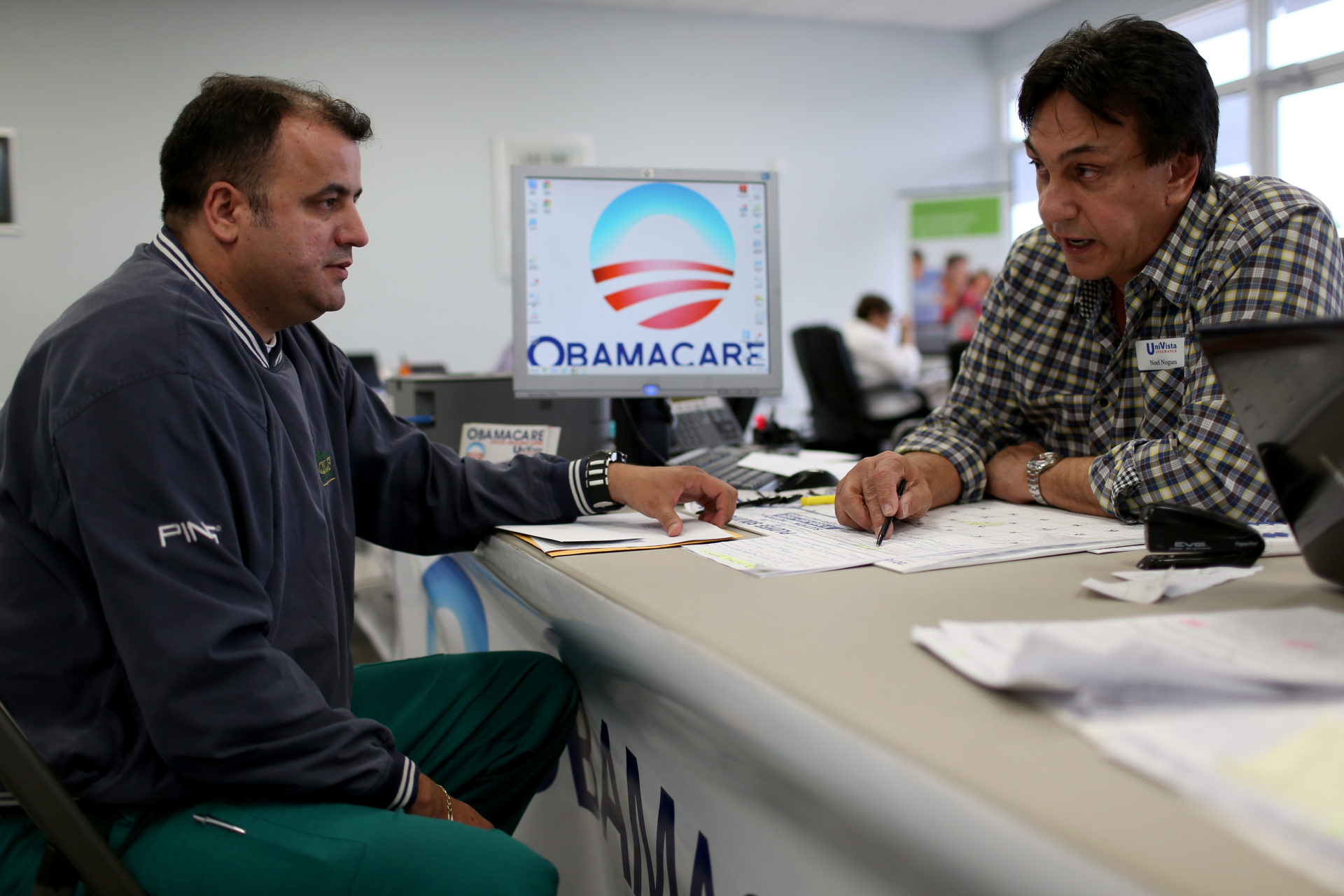 Ariel Fernandez (L) sits with Noel Nogues, an insurance adviser with UniVista Insurance Co., as he signs up for the Affordable Care Act, also known as Obamacare, before the Feb. 15th deadline on Feb. 5, 2015, in Miami, Fla. In a Morning Consult survey, roughly 1 in 4 said the cost of the premium is the most important factor when choosing a plan — three times the share that said the deductible is top-of-mind (24 percent to 8 percent, respectively). (Joe Raedle/Getty Images)
By Yusra Murad

Of all the shopping decisions Americans make, few are more important than choosing a health insurance plan.

State marketplaces for health plans on the Affordable Care Act exchange are now live for the six-week open enrollment period for 2020, offering plans with a wide range of cost-sharing options for people seeking new coverage or looking to renew their current coverage. Premiums for ACA plans are set to increase by their smallest margin ever, just two years after a record-high increase of 28 percent for the 2018 enrollment period.

That could come as welcome news for consumers looking to choose an ACA plan this year: Polling shows that of the many factors to consider when reviewing health plan options, none are more salient to Americans than their monthly premium. In a Morning Consult survey conducted Oct. 11-13 among 2,195 adults, roughly 1 in 4 said the cost of the premium is the most important factor when choosing a plan — three times the share that said the deductible is top-of-mind (24 percent to 8 percent, respectively). The poll has a margin of error of 2 percentage points. 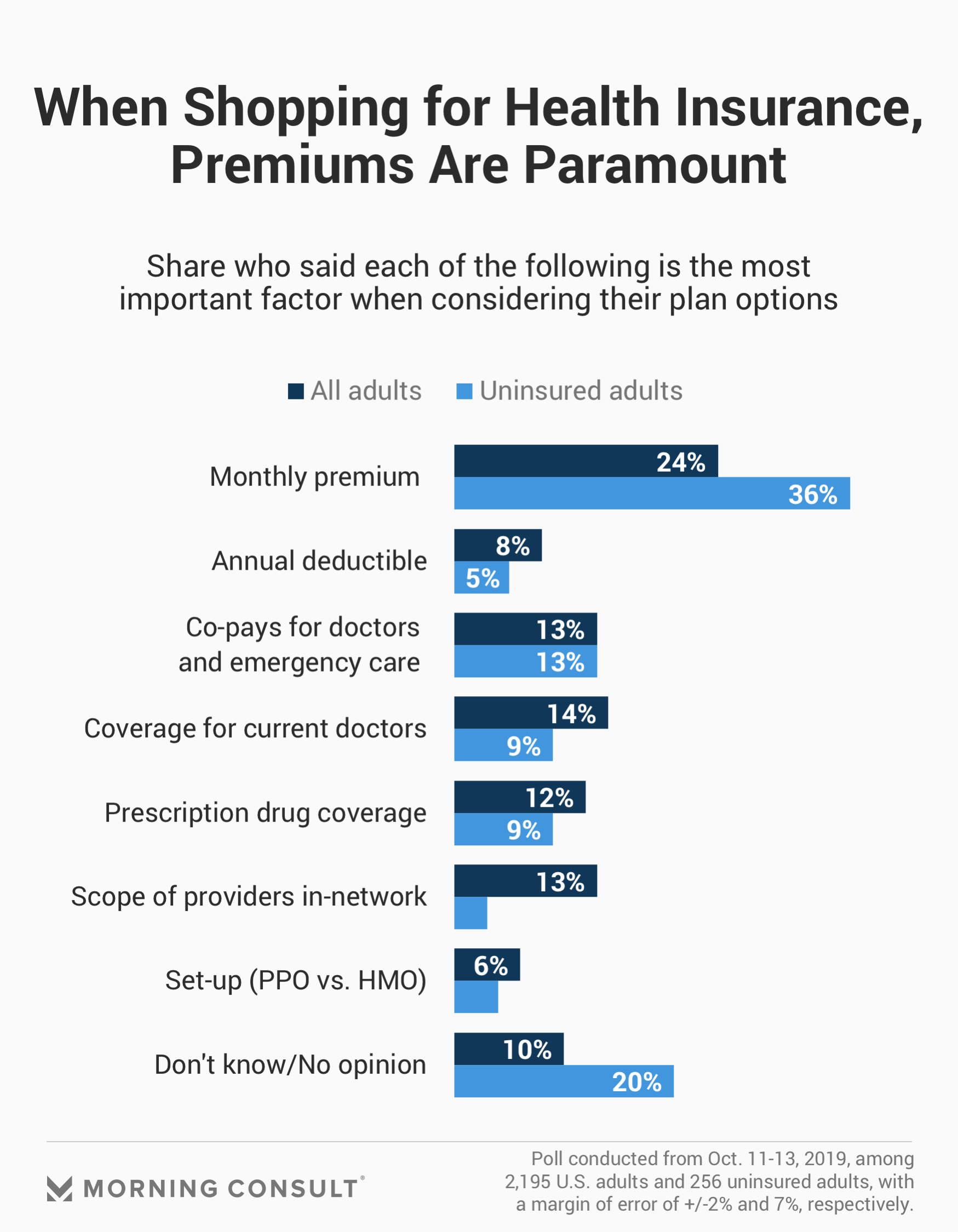 Deductibles — the amount someone must pay for health services before the bills are sent to the insurance company — have skyrocketed in the past decade, increasing at a rate eight times that of wages since 2008, according to a Kaiser Family Foundation/Los Angeles Times survey conducted in May. And though high-deductible health plans have come under scrutiny from policymakers and health economists, the corresponding lower premiums can be appealing for Americans who aren’t willing to shell out any more of their monthly pay.

Lower deductibles can be an incentive for people to switch plans — more than a third of those who are planning to change their current plan cited high deductibles as a “major” reason why — but they aren’t a make-or-break factor for people weighing all their options. For many Americans, other factors, such as whether the plan covers their current doctors and the scope of available in-network providers, are a higher priority.

Uninsured adults are even more concerned with premiums than deductibles, with 36 percent saying it is the top factor in their decision versus 5 percent who said the same about the annual deductible.

Young people are particularly conscious of the burden of their visible cost-sharing — adults ages 29 and under are the most likely, at 20 percent, to say coverage for prescription drugs is the most important factor in choosing a plan, with 17 percent saying both premiums and copays at the doctors’ office are paramount.

Individual health costs are particularly salient at the onset of this year’s enrollment season: For the first time on a presidential stage, the conversation about “Medicare for All” has shifted from an ideological debate to a detailed policy discussion, with Sens. Bernie Sanders (I-Vt.) and Elizabeth Warren (D-Mass.) urging their opponents to focus not just on the cost of implementing single-payer but the hidden costs Americans already pay for access to the current system.

Progressive lawmakers now face a treacherous path: selling Americans on the new taxes Medicare for All would require. Tax hikes — especially on the middle class — are a political third rail, even for Democrats, and Medicare for All advocates are depending on their argument that premiums essentially already serve as a tax to be successful.

But a 44 percent plurality of adults do not consider their premium to be a tax, with Democrats and Republicans equally unlikely, at 46 percent, to buy that argument. Younger adults, millennials and African Americans are the demographic groups with the most potential to be persuaded on the issue, as they are roughly split on whether premiums constitute a tax.