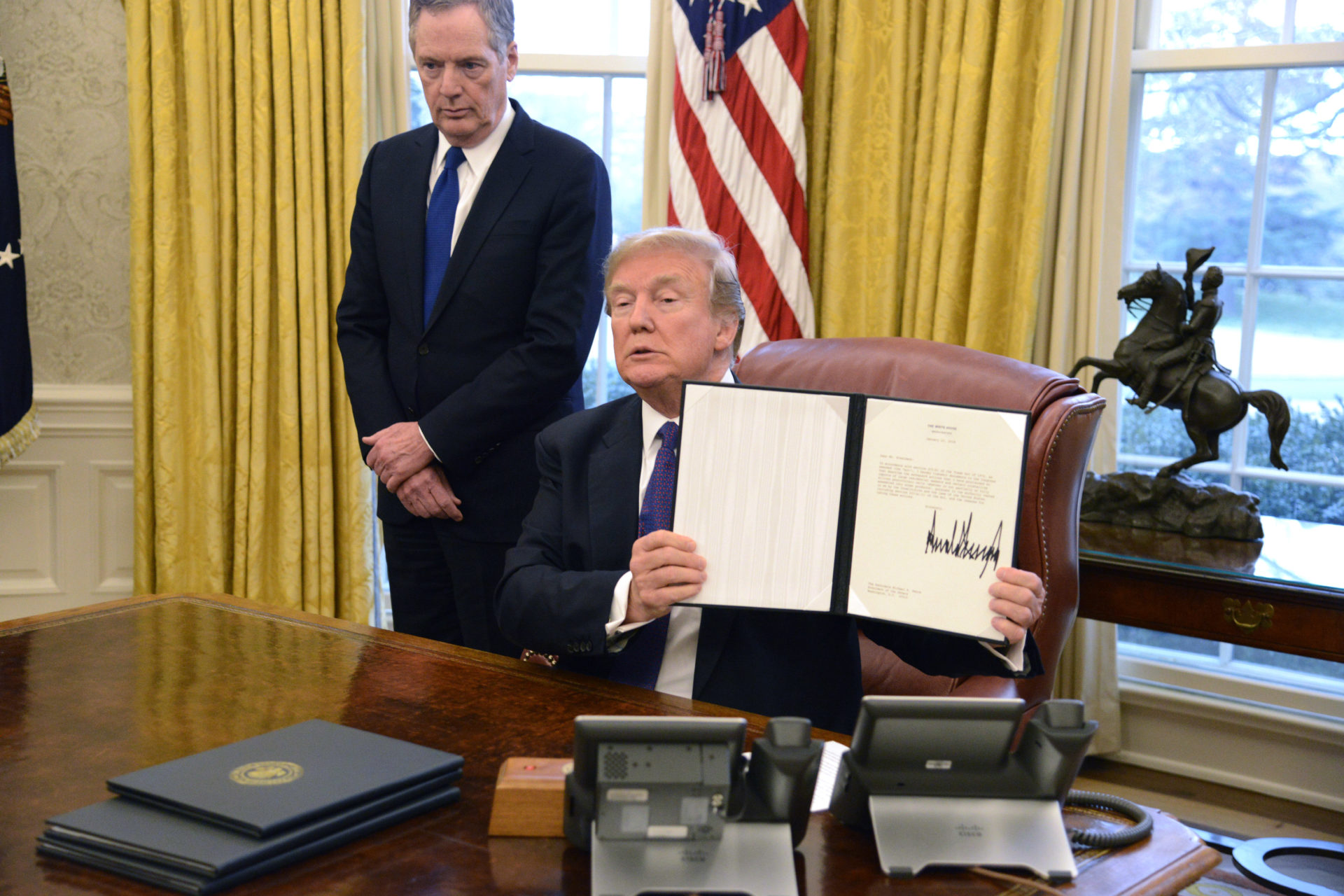 President Donald Trump displays a Section 201 action as U.S. Trade Representative Robert Lighthizer witnesses in the Oval Offic, at the White House on Jan. 23, 2018, in Washington, D.C. The U.S. Trade Representative’s recent withdrawal of a Section 201 tariff exclusion for bifacial solar panels appears to have followed requests from U.S. manufacturers of the panels, who stand to benefit from the implementation of a charge on imported modules. (Mike Theiler-Pool/Getty Images)
By Jacqueline Toth

The U.S. Trade Representative’s recent withdrawal of a Section 201 tariff exclusion for bifacial solar panels appears to have followed requests from backers of U.S. solar companies that stand to benefit from the implementation of a charge on imports of the modules.

The tariff exemption, approved in June, could end as soon as Friday if a court does not grant a temporary reprieve, exposing buyers of bifacial panels to a tariff starting at 25 percent.

The withdrawal comes as more than $1 billion in solar contracts were signed based on the exclusion, according to John Smirnow, general counsel and vice president of market strategy at the Solar Energy Industries Association.

Hanwha Q CELLS and Tempe, Ariz.-based First Solar Inc. are the principal opponents of the exclusion, Smirnow said. Both of those companies are SEIA members; Hanwha joined SEIA’s board of directors in June.

“We agree to disagree with them on this,” Smirnow said.

Both offices of Georgia’s U.S. senators were contacted by at least one company involved in the push. Hanwha opened a solar module manufacturing plant in Georgia this year.

The office of Sen. Johnny Isakson (R-Ga.) “was contacted by two constituent companies, Hanwha and Suniva, regarding the potential withdrawal by USTR of the bifacial exclusion,” said a spokesperson for the office. “We outlined the position our constituent companies were in with USTR, relaying their concerns that not withdrawing the exclusion could jeopardize the huge investment Hanwha made in Dalton, Georgia.”

Isakson’s office said it “did not advocate one way or the other but asked USTR to hear out our constituent companies and to make a decision sooner rather than later and allow the companies to at least plan around the exclusion, should USTR choose to keep it in place.”

The office of Sen. David Perdue (R-Ga.) was made aware of the situation and subsequently contacted USTR for more information but did not weigh in on any of the decisions, according to his office.

On the other side, a few senators are seeking to block implementation of the tariff for bifacial modules by law. On Oct. 29, Thom Tillis (R-N.C.) accompanied by Sens. Cory Gardner (R-Colo.) and Lindsey Graham (R-S.C.), submitted an amendment to the Senate’s manager’s amendment to a House package of spending bills to bring about that effect. The Senate agreed to the manager’s amendment by unanimous consent on Oct. 31. Lawmakers have not yet solidified fiscal 2020 spending.

None of the three senators’ offices returned a request for comment by time of publication.

Related: North Dakota, in Last Place for Solar, Takes Steps to Move Up the Ranks

SEIA has intervened in support of a complaint filed by Chicago-based Invenergy Renewables LLC, a privately held energy project developer and operator that has challenged the withdrawal in the U.S. Court of International Trade. The company buys imported bifacial solar modules subject to the now-withdrawn exclusion.

“Invenergy set prices and entered into supplier and customer contracts with the understanding that the bifacial exemption would remain in place following a transparent 18-month review process,” Invenergy spokeswoman Beth Conley said in an email Wednesday.

The developer is seeking a decision on a temporary restraining order before the withdrawal, published Oct. 9, kicks in Friday.

The public version of Invenergy’s confidential complaint says the USTR’s action violates the Administrative Procedure Act, for not providing prior notice or an opportunity to comment, and failing to explain its rationale. It also alleges that the move violates due process and the established means of determining solar tariff exclusions.

The complaint includes a copy of a June 26, 2019, letter to Deputy USTR Ambassador Jeffrey Gerrish from metro-Atlanta-based Suniva Inc., First Solar and Q CELLS North America that urged the rescission of the exclusion, an exemption they said would “undermine the relief afforded by the Solar 201 tariffs.”

The companies raised concerns that foreign exporters could easily convert mono-facial panels to bifacial ones and ship “very significant quantities” to the United States “tariff-free.” First Solar, the letter said, had “ongoing customer negotiations immediately disrupted” at the time the exclusion was originally requested.

On Monday, Clearway Energy Group LLC, a San Francisco-based developer focused on utility-scale wind and solar, also moved to intervene as a plaintiff.

Unlike traditional solar modules, bifacials can produce electricity from both sides of the panel. They have overcome past cost constraints, and total global installed capacity of the modules is expected to double to 5,420 megawatts by the end of the year, according to a September report from research and consultancy group Wood Mackenzie Power & Renewables.

The bifacial tariff exemption was expected to give the modules a boost in the United States, especially in the utility sector, the report said.

Advocates say that any withdrawal is expected to be damaging to the U.S. solar industry overall, particularly in the utility space.

SEIA Vice President of Public Affairs Dan Whitten said the organization expects that from 2017 to 2021, the tariffs will cost 62,000 domestic jobs and $8.5 billion in investment. The tariffs only took effect in 2018, but the industry saw a slowdown in 2017 in anticipation of their implementation, Whitten said.