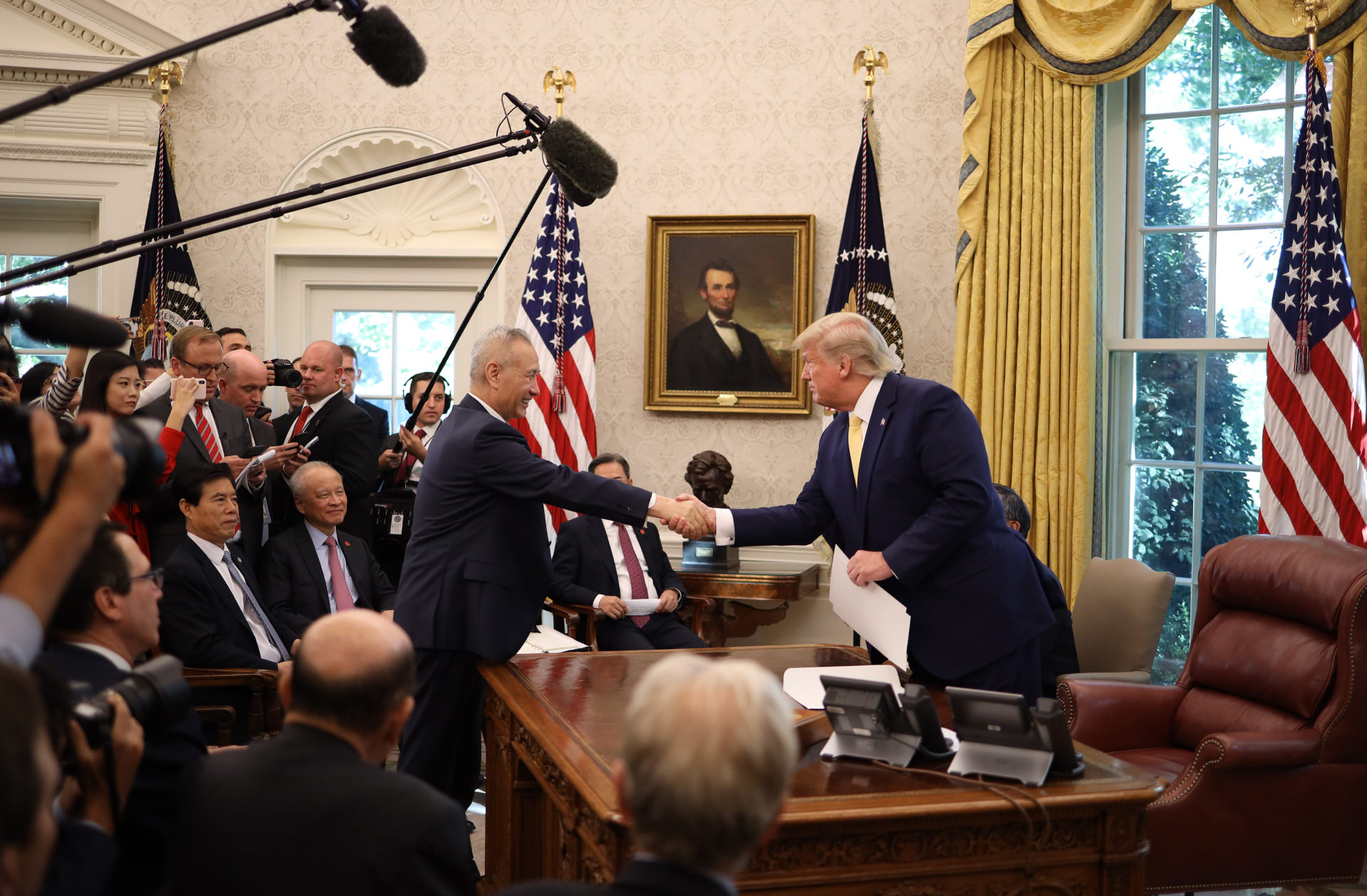 President Donald Trump shakes hands with Chinese Vice Premier Liu He after announcing a "phase one" trade agreement with China in the Oval Office on Oct. 11, 2019 in Washington, D.C. In a Nov. 1-3 Morning Consult/Politico poll, 27 percent of voters said they have “a lot” of confidence in Trump’s handling of the economy. (Win McNamee/Getty Images)
By Claire Williams

President Donald Trump is, so far, outflanking his Democratic challengers on the economy — the centerpiece issue for his 2020 campaign.

It’s been a mixed picture for the economy leading up to the height of the presidential race: Employers added 128,000 jobs in October and consumers are continuing to spend, but the manufacturing sector is slumping as Trump’s trade war hurts businesses, and investments are cooling.

Still, Trump has repeatedly touted a growing economy and booming stock market on Twitter and in campaign events. And some voters seem to be buying the president’s narrative.

Trump holds double-digit leads over his closest Democratic rivals on the question of which candidate voters trust “a lot” to handle the economy if elected president, according to a new Morning Consult/Politico poll. 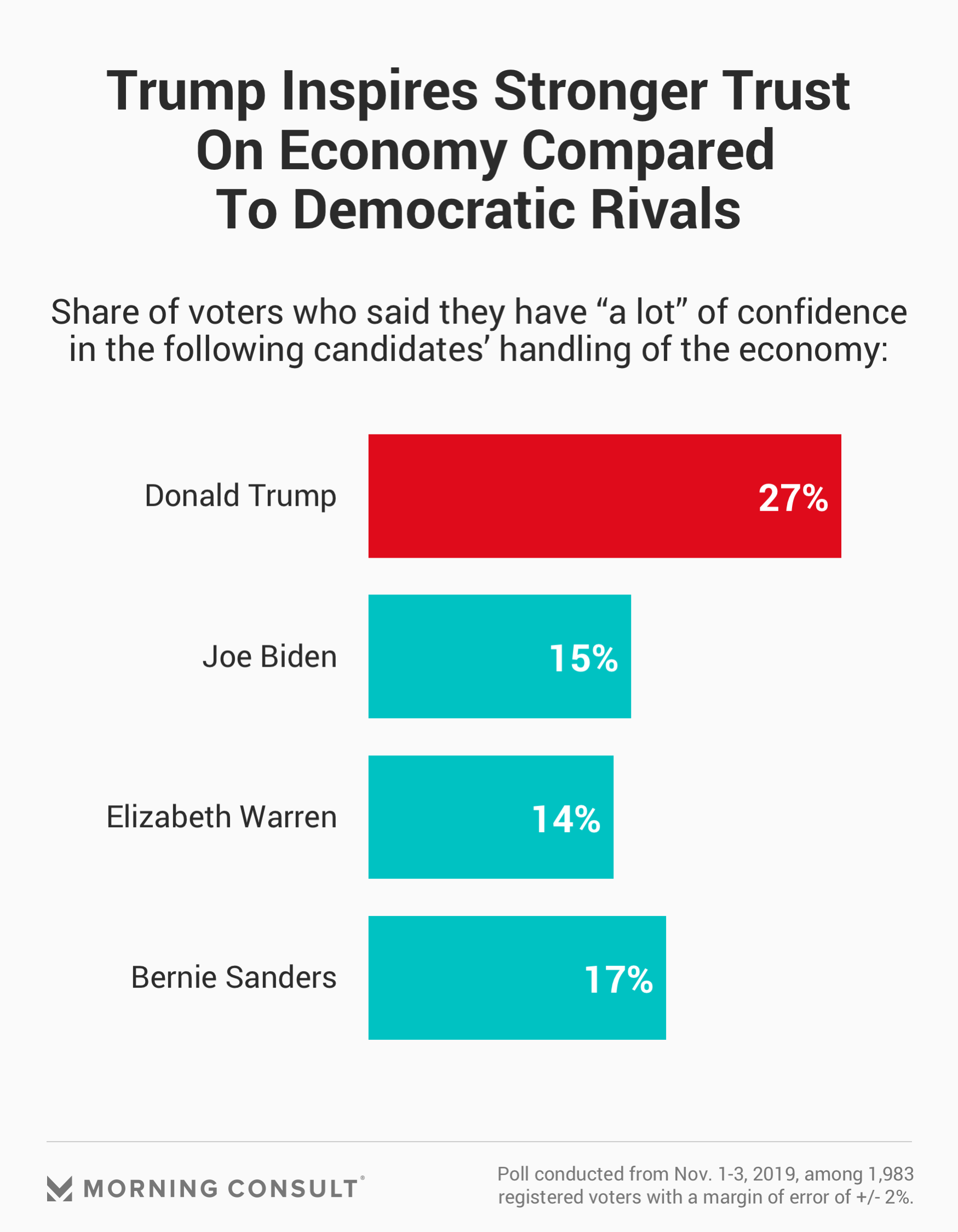 Twenty-seven percent of voters say they have a lot of confidence in Trump’s handling of the economy, 12 percentage points more than the 15 percent of voters who say the same about former Vice President and Democratic front-runner Joe Biden.

The poll surveyed 1,983 registered voters from Nov. 1-3 and carries a 2-point margin of error.

Trump’s supporters are far more enthusiastic about the way he would handle the economy, compared to the support his Democratic rivals can garner. Sixty-four percent of Republicans said they trusted Trump “a lot,” while only 6 percent said they have no trust at all.

“It’s Trump’s election to lose and the Democrats’ to win, based on the economy,” said Mark Zandi, chief economist of Moody’s Analytics. “I think the economy is performing well, and for most people’s perspective they’ve got a job, their pay increase was bigger this year, the stock market is high and interest rates are low.”

Overall, Warren — a Wall Street hawk who has released plans that would tax the wealthiest Americans and financial transactions to pay for social programs — had the lowest share of voters among the top three Democratic candidates at 14 percent. Sanders came closest to Trump at 17 percent.

Trump is also the most polarizing candidate on the economy, netting the highest share of voters who had no confidence “at all” in his ability to handle the economy at 36 percent. Twenty-seven percent said the same about Biden, while Warren and Sanders registered at 29 percent and 30 percent, respectively.

While Trump outperformed Democrats in who had “a lot” of trust, the margin between him and his closest rivals narrowed significantly when it came to at least “some” trust.

Related: Roughly Half of Trump Voters Would at Least Partially Blame Him for a Recession
Consumer Confidence Donald Trump U.S. Economy